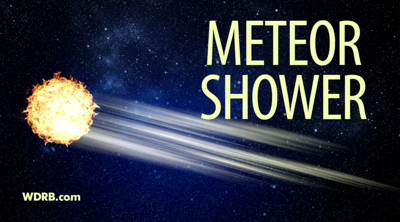 For the next week or so the Delta Aquarid Shower will reign supreme, but it's not the only upcoming meteor shower. From early to mid August, it will be the Perseid Meteor Shower that lights up the sky. Let's take them one at a time and focus on the Delta Aquarids which will peak around July 28th. The first quarter moon we have right now shouldn't get in the way too much as long as clouds cooperate. 10-20 meteors are possible per hour, but I'd expect the lower end of that range.

To best see the Southern Delta Aquariids, face due south and look approximately half-way up in the sky. Most of the Delta Aquariid activity will shoot upward into your field of view. Most of these meteors are on the faint side and easily missed. It helps to find a dark location away from street lights to increase your chances of viewing more activity. If you want to get technical, the hours surrounding 2 AM would be your best chance to see the meteors, but any time between midnight and dawn should work.

About the Meteor Shower

The Delta Aquarids are active beginning in mid-July and are visible until late-August. These faint meteors are difficult to spot, and if there is a moon you will not be able to view them. If the moon has set, your best chance to see the Delta Aquarids is when meteor rates rise during the shower's peak at the end of July.  If you are unable to view the Delta Aquarids during their peak, look for them again during the Perseids in August. You will know that you have spotted a Delta Aquarid if the meteor is coming from the direction of the constellation Aquarius -- its radiant will be in the southern part of the sky. The Perseid radiant is in the northern part of the sky.

The Delta Aquarids are best viewed in the Southern Hemisphere and southern latitudes of the Northern Hemisphere. Find an area well away from city or street lights. Come prepared with a sleeping bag, blanket or lawn chair. Lie flat on your back and look up, taking in as much of the sky as possible. However, looking halfway between the horizon and the zenith, and 45 degrees from the constellation of Aquarius will improve your chances of viewing the Delta Aquarids. In less than 30 minutes in the dark, your eyes will adapt and you will begin to see meteors. Be patient -- the show will last until dawn, so you have plenty of time to catch a glimpse.

Where Do Meteors Come From?

Meteors come from leftover comet particles and bits from broken asteroids. When comets come around the sun, the dust they emit gradually spreads into a dusty trail around their orbits. Every year the Earth passes through these debris trails, which allows the bits to collide with our atmosphere where they disintegrate to create fiery and colorful streaks in the sky.

The pieces of space debris that interact with our atmosphere to create the Delta Aquarids are suspected to originate from comet 96P/Machholz. This short period comet orbits the sun about once every five years. Comet Machholz was discovered by Donald Machholz in 1986. Comet Machholz's nucleus is 6.4 km (about 4 miles) across (this is a little more than half the size of the object hypothesized to have led the demise of the dinosaurs).