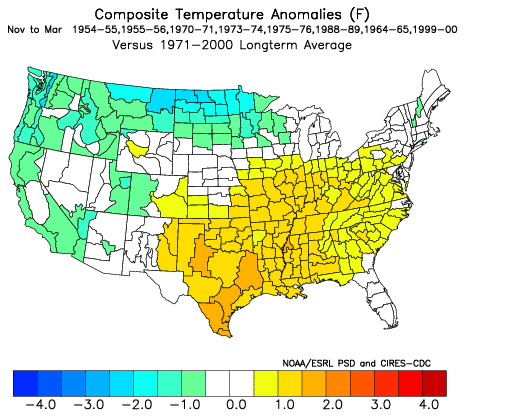 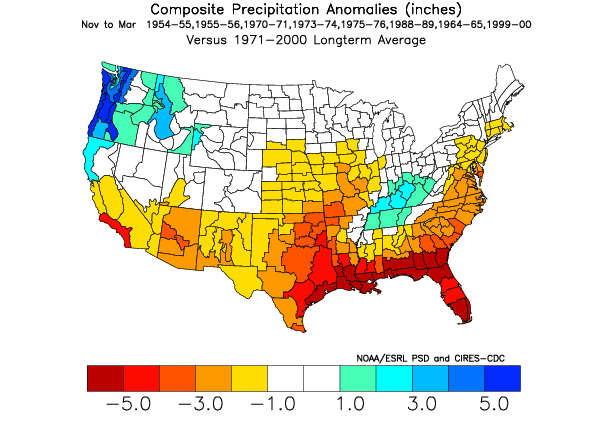 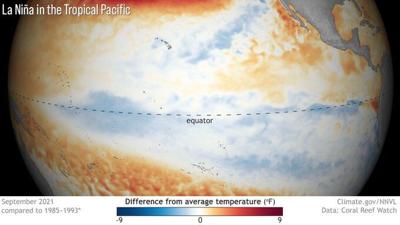 A La Nina has developed and will extend through the second winter in a row according to NOAA’s Climate Prediction Center — a division of NOAA's National Weather Service. La Nina is a natural ocean-atmospheric phenomenon marked by cooler-than-average sea surface temperatures across the central and eastern Pacific Ocean near the equator and is translated from Spanish as “little girl.”

La Nina is one part of the El Nino Southern Oscillation (ENSO) cycle, which is characterized by opposing warm and cool phases of oceanic and atmospheric conditions in the tropical Pacific Ocean. Consecutive La Ninas following a transition through ENSO neutral conditions are not uncommon and can be referred to as a “double-dip.” In 2020, La Nina developed during the month of August and then dissipated in April 2021 as ENSO-neutral conditions returned.

“Our scientists have been tracking the potential development of a La Nina since this summer, and it was a factor in the above-normal hurricane season forecast, which we have seen unfold,” said Mike Halpert, deputy director of NOAA’s Climate Prediction Center. “La Nina also influences weather across the country during the winter, and it will influence our upcoming temperature and precipitation outlooks.”

This La Nina is expected to last through the early spring 2022. For the upcoming winter season, which extends from December 2021 through February 2022, there is an 87% chance of La Nina.

Previous La Ninas occurred during the winter of 2020-2021 and 2017-2018, and an El Nino developed in 2018-2019. When neither climate pattern is present, ENSO is neutral and does not influence global climate patterns.

What does this mean for us?

In the lower and middle Ohio Valley, La Niña tends to increase our chances of wetter and warmer than normal conditions. However, it is very important to remember that La Niña is just one player on the vast team of factors that combine to produce our weather. We are also looking extremely far out into the future so please don't invest too much in these seasonal outlooks.

Below is a map of the typical effect La Niña has on the November-March temperatures in the United States. The yellow and orange colors indicate areas where temperatures often average warmer than normal during a La Niña winter:

Here is a map showing the typical effect La Niña has on November-March precipitation. The blue and green colors in the Ohio Valley indicate a tendency toward wetter than normal conditions: