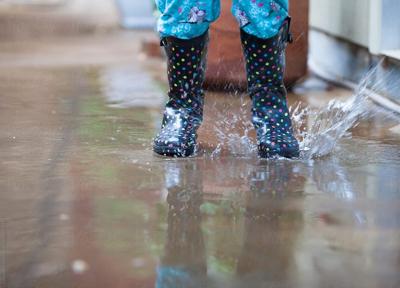 After an absolutely amazing Kentucky Derby with temperatures in the mid 70s, sunshine, and low humidity, clouds have built back into the area this morning. For the most part, clouds are going to be the main story for your Sunday. We'll continue to see this cloud cover persist throughout our day and into the afternoon, but won't likely see rainfall associated with it until this evening.

By the noontime hour, temperatures have already climbed into the mid 70s, even with the cloud cover. The majority of the area will still be dry, although a couple very small isolated showers aren't out of the question. Worst case we see a few sprinkles in only a couple locations.

By mid-afternoon a few more showers have begun to move into the area, but still, most areas are dry. The number of showers increases, but 80% of the area or so is still not seeing any rainfall. Those who do during this time likely will just have very light rain and won't be seeing it for too long. Temperatures will be stopping out in the upper 70s, some possibly reaching 80 degrees despite the cloud cover.

Approaching sunset, which is at 8:36pm, will be the best likely time the majority of the rain will start moving into the area. These showers will be coming in from the Southwest, so areas near Elizabethtown, Leitchfield, and Munfordville will likely see these first. This is still going to only be light to moderate rainfall pushing into the late evening hours.

Tomorrow morning's commute will likely be slower than normal as more showers and storms continue to push through the area. Some of these storms could be on the stronger side and could produce heavy rainfall and gusty winds. Make sure that you are taking your time out on the roadways Monday morning as these scattered storms move through the area.

We also have the chance to see a few strong to severe storms move through the area late Monday night and into early Tuesday morning. As of right now, the Storm Prediction Center has our area included in a Slight risk for severe storms. The main threat we're watching with this system is going to be damaging winds, hail, and an isolated tornado threat. There will be plenty of fuel available for these storms to enhance, so we will need to keep an eye on it as we approach Tuesday morning.

By the time this is all said an done, total rainfall amounts through the end of Tuesday vary depending on computer model, but the general consensus is that our Kentucky counties are likely to see amounts closer to 1.25"-2.0" of rain. Our Southern Indiana counties as of now look like they are going to get a little bit less when this is all said and done, up to around 1".

Hannah Strong will have the updated forecast tonight on WDRB News at 10pm. Jude Redfield will be providing the latest radar updates every 10 minutes as these storms are moving through on Monday morning from 5-9am.