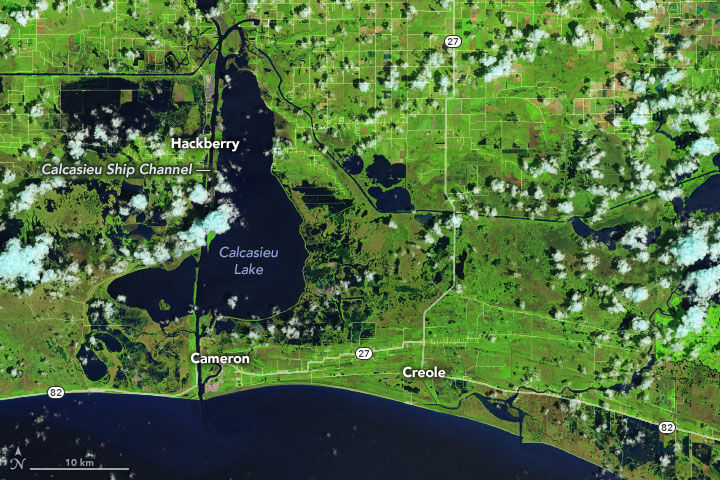 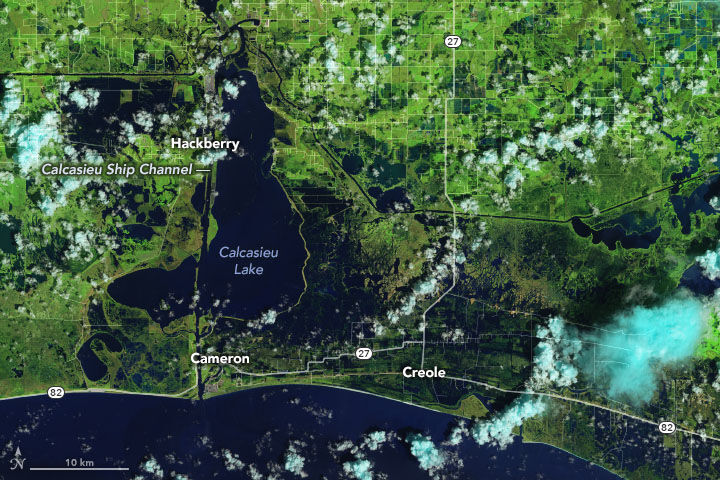 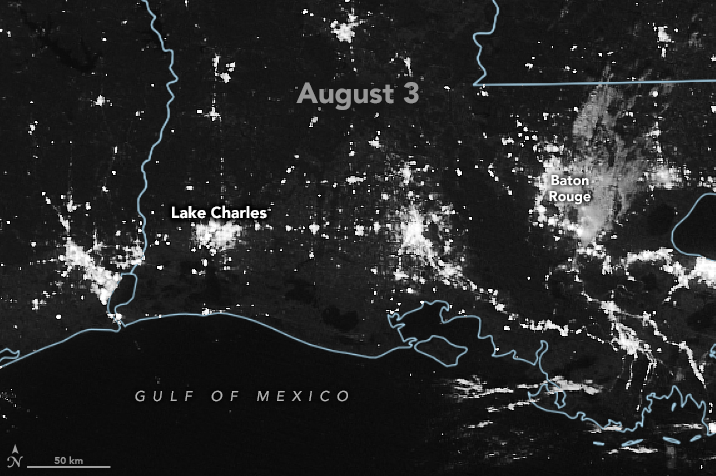 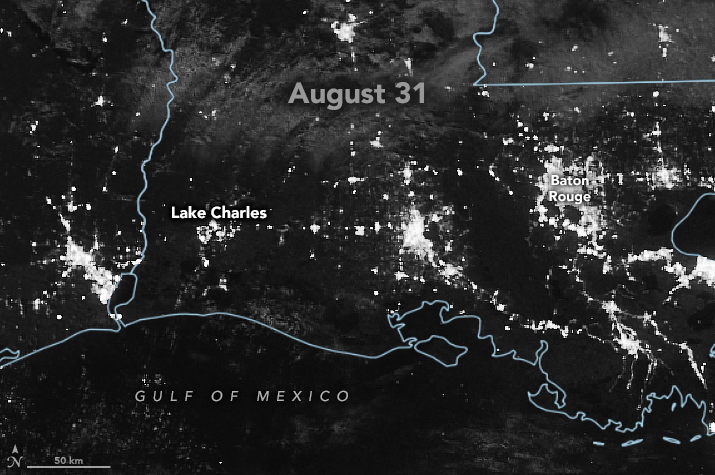 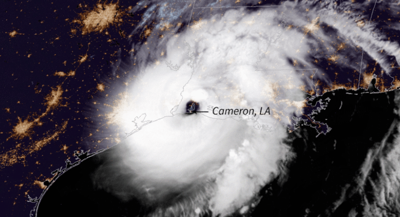 Hurricane Laura was among the ten strongest hurricanes to ever make landfall in the United States. The scars are visible on the landscape of Louisiana and east Texas.

Laura made landfall as a category 4 storm late on August 26, 2020, bearing sustained winds of 150 miles (240 kilometers) per hour and storm surges ranging from 9 to 15 feet (3 to 5 meters). The storm dropped 5 to 10 inches of rain on several areas in Louisiana, Texas, and Arkansas. In the wake of the storm, the Operational Land Imager (OLI) on Landsat 8 acquired images of flooded coastal lands around the towns of Cameron and Creole, Louisiana, south of the city of Lake Charles (population 78,000).

The false-color images above were acquired on August 13 and 29, 2020. They were composed from a combination of shortwave infrared, near infrared, and natural color (bands 6-5-4) to make it easier to distinguish flooded areas (navy blue and black) from drier ground. Vegetation is bright green and clouds are cyan.

According to hurricane historian Phil Klotzbach of Colorado State University, Laura tied for the fifth strongest hurricane to ever make landfall in the continental United States. That the cost in human lives has been relatively low—18 deaths reported so far in Louisiana and Texas—is a matter of some good luck and good forecasting. The eye of the storm made landfall in a sparsely populated area just east of Calcasieu Ship Channel. Forecasters had warned of a potentially devastating storm surge up to 20 feet along the coast, and the channel might have funneled that water far inland. It did not. The outcome was also a testament to strong forecasting and communication by the National Hurricane Center and local emergency management authorities in preparing the public for the hazards.

“Somehow there is this perception that Hurricane Laura was not that bad. I think it is because ‘only 16’ people died,” wrote Marshall Shepherd, an atmospheric scientist at the University of Georgia. “That’s because the warnings worked. But the city of Lake Charles is a disaster.”

Winds remained fierce long after Hurricane Laura blew ashore, downing trees and power lines, blowing out windows, and tearing up roofs. A gust of 137 miles per hour was measured in the city of Lake Charles, nearly 30 miles inland. The storm sustained hurricane force for nearly ten hours after landfall, when it was centered in Arkansas. Early estimates of property damage ranged broadly from $4 billion to $30 billion according to news media, with at least 8,000 homes lost or severely damaged.

The nighttime images above were acquired by the Visible Infrared Imaging Radiometer Suite (VIIRS) on the NOAA-NASA Suomi NPP satellite in the early morning hours of August 3 and August 31, 2020. The image was acquired through the use of the VIIRS day-night band (DNB), which detects light in a range of wavelengths from green to near-infrared and uses filtering techniques to observe signals such as city lights, wildfires, and reflected moonlight.

As of the afternoon of August 31, 2020, more than 285,000 people in Louisiana were without electricity, with another 65,000 blacked out in Texas. Calcasieu County and Beauregard County—which surround the city of Lake Charles, Louisiana—reported more than 120,000 citizens without power. Many also lacked running water. In the immediate aftermath of Laura, an estimated 900,000 people in the region were without electricity.

Editor’s Note: Readers in need of disaster assistance should visit the web sites of the Federal Emergency Management Agency (FEMA) and the state of Louisiana hurricane page. The National Ocean Service and the U.S. Geological Survey have posted galleries of images that are being used to assess coastal damage from the storm. Many NASA disaster response resources are posted here.