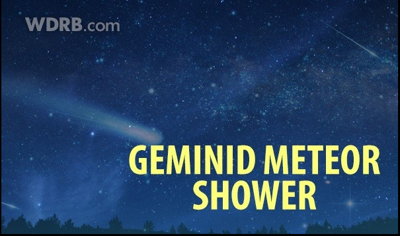 The Geminid meteor shower, active every December, is peaking now!  The best time to watch is around 2 AM. That's when the radiant point will be highest in the sky, but you can start watching for them any time tonight. Look toward the eastern horizon in the early evening and higher up in the sky if you watch later in the night.

In a completely dark sky, you may see as many as 50 meteors per hour, but this is not a completely dark sky. Just a few days ago we experienced a full moon, and though the moon is now waning, it will still be bright in the night sky. If you want to see a shooting star, give you eyes time to adapt and get away from the city lights.  It normally takes about 20 minutes for your eyes to adapt to the low light. The Geminid shower is known for bright, white and quick "shooting stars."

Will the weather cooperate?

If you want to watch the show, bundle up!! Temperatures will be in the 30s tonight, dropping to the lower 30s in the city and the middle to upper 20s in the surrounding counties.

The clouds will never totally disappear from the sky, but if you wait until early Sunday morning to look for the meteors, you will likely see more breaks in the clouds. If you try tonight, you'll likely have a hard time finding a break in the clouds to look through.

About the Geminid Shower

The Geminids are active every December, when Earth passes through a massive trail of dusty debris shed by a weird, rocky object named 3200 Phaethon. The dust and grit burn up when they run into Earth's atmosphere in a flurry of "shooting stars."

"Phaethon's nature is debated," said Cooke. "It's either a near-Earth asteroid or an extinct comet, sometimes called a rock comet." As an added bonus this year, astronomers will have a chance to study Phaethon up close in mid-December, when it passes nearest to Earth since its discovery in 1983.

Meteor showers are named after the location of the radiant, usually a star or constellation close to where they appear in the night sky. The Geminid radiant is in the constellation Gemini. The Geminids can be seen with the naked eye under clear, dark skies over most of the world, though the best view is from the Northern Hemisphere. Observers will see fewer Geminids in the Southern Hemisphere, where the radiant doesn't climb very high over the horizon.

If you do manage to see one and snag a picture, make sure to send it to us!