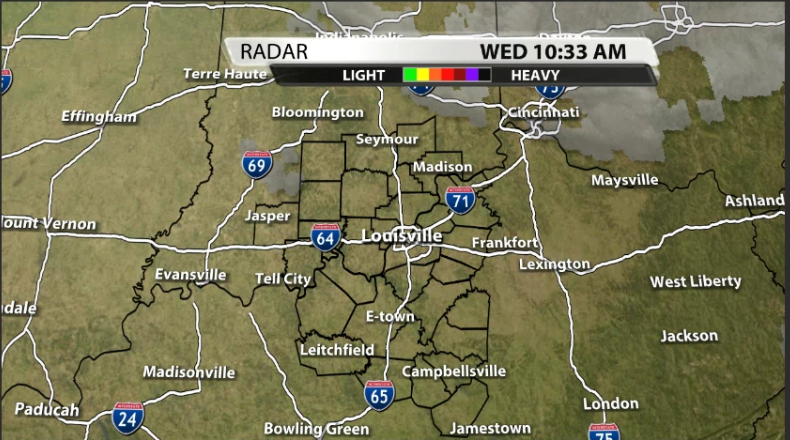 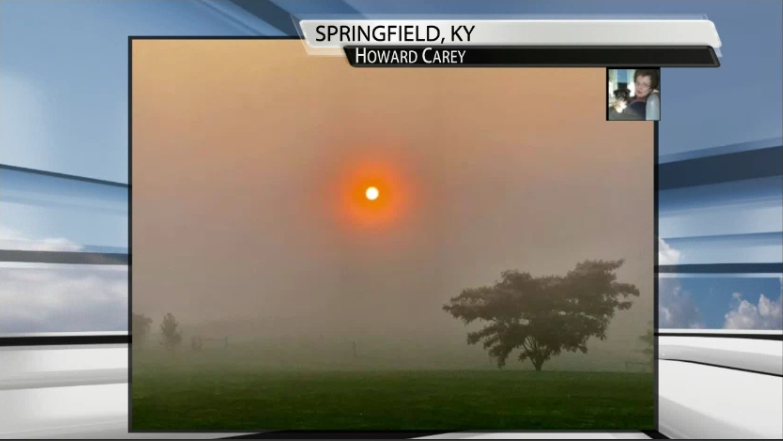 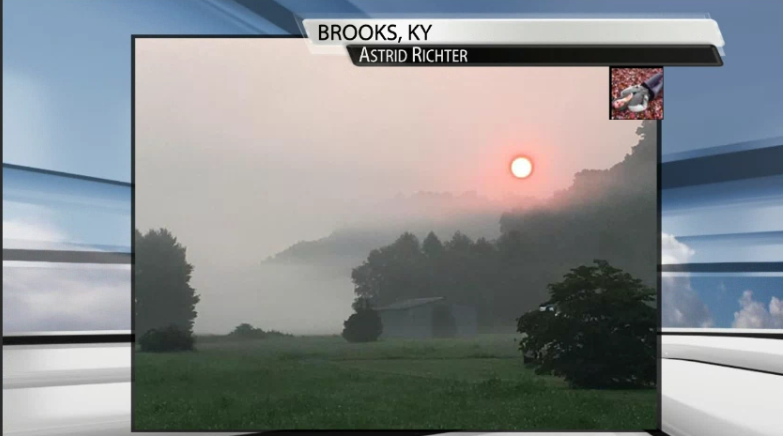 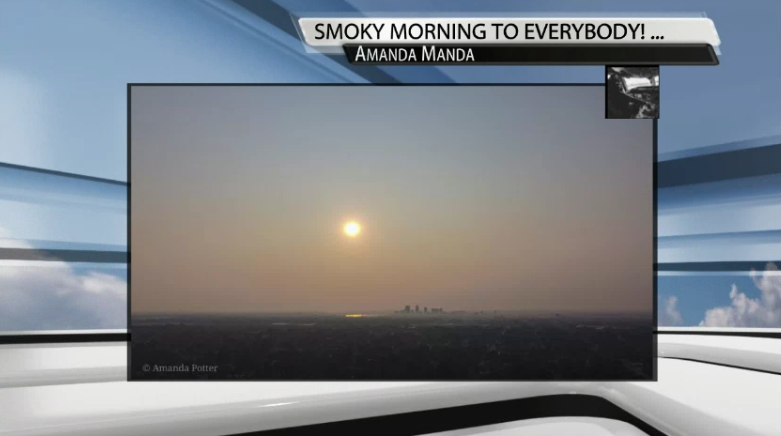 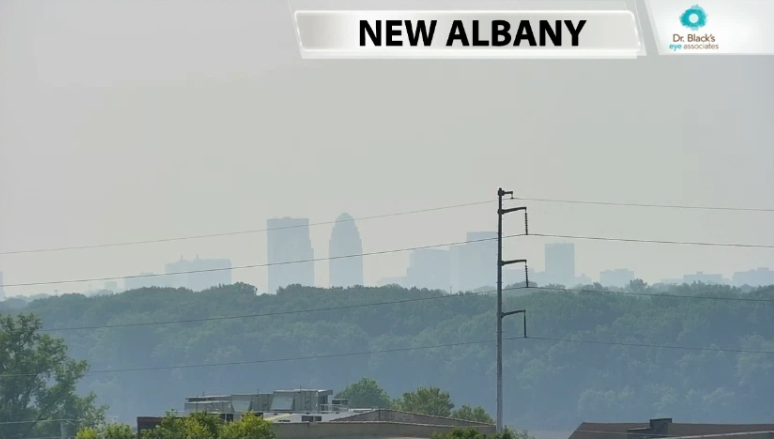 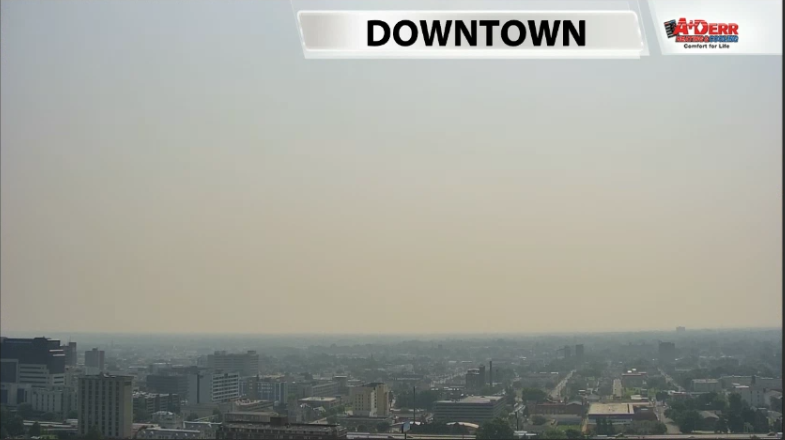 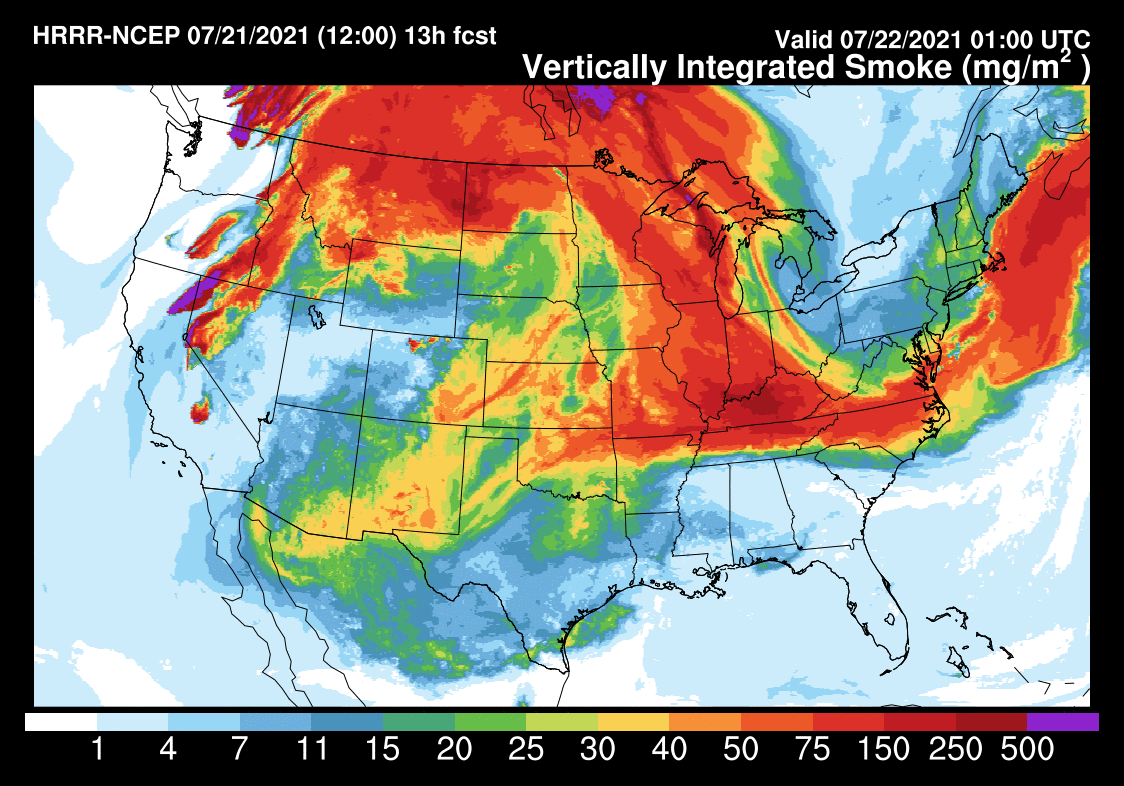 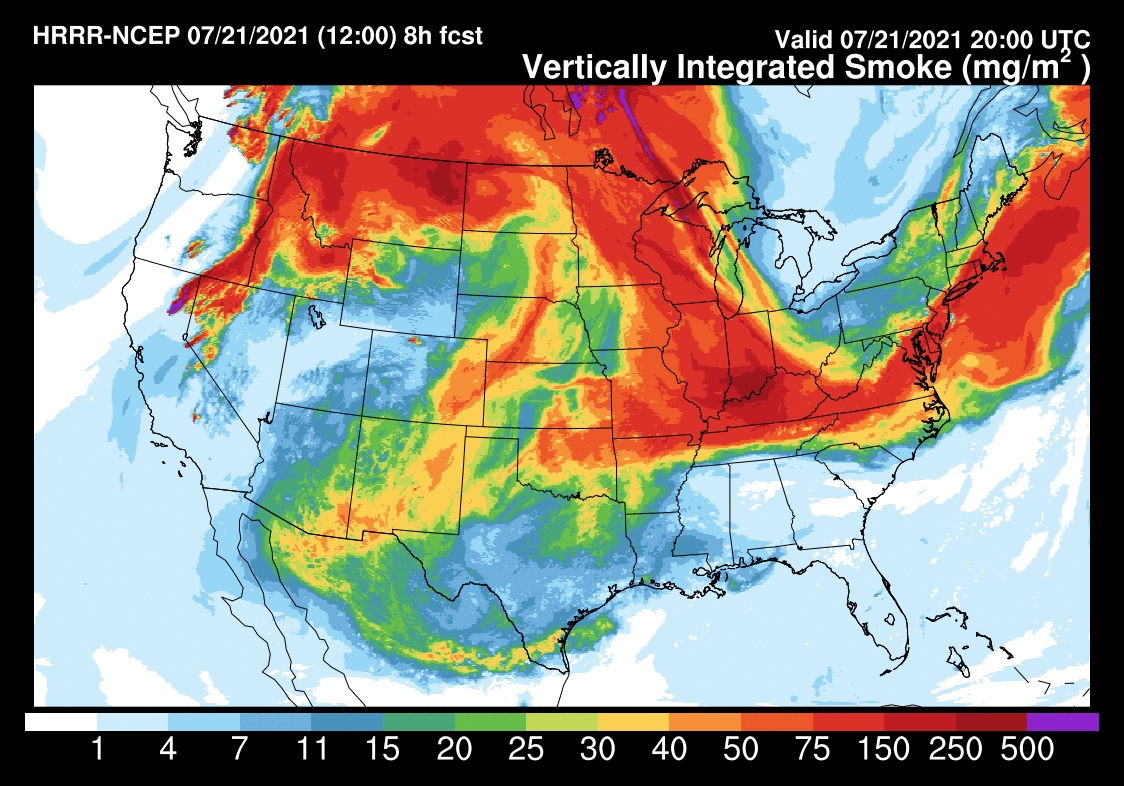 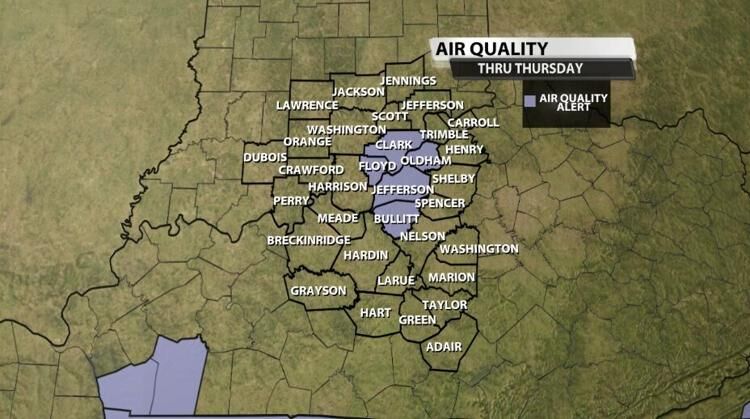 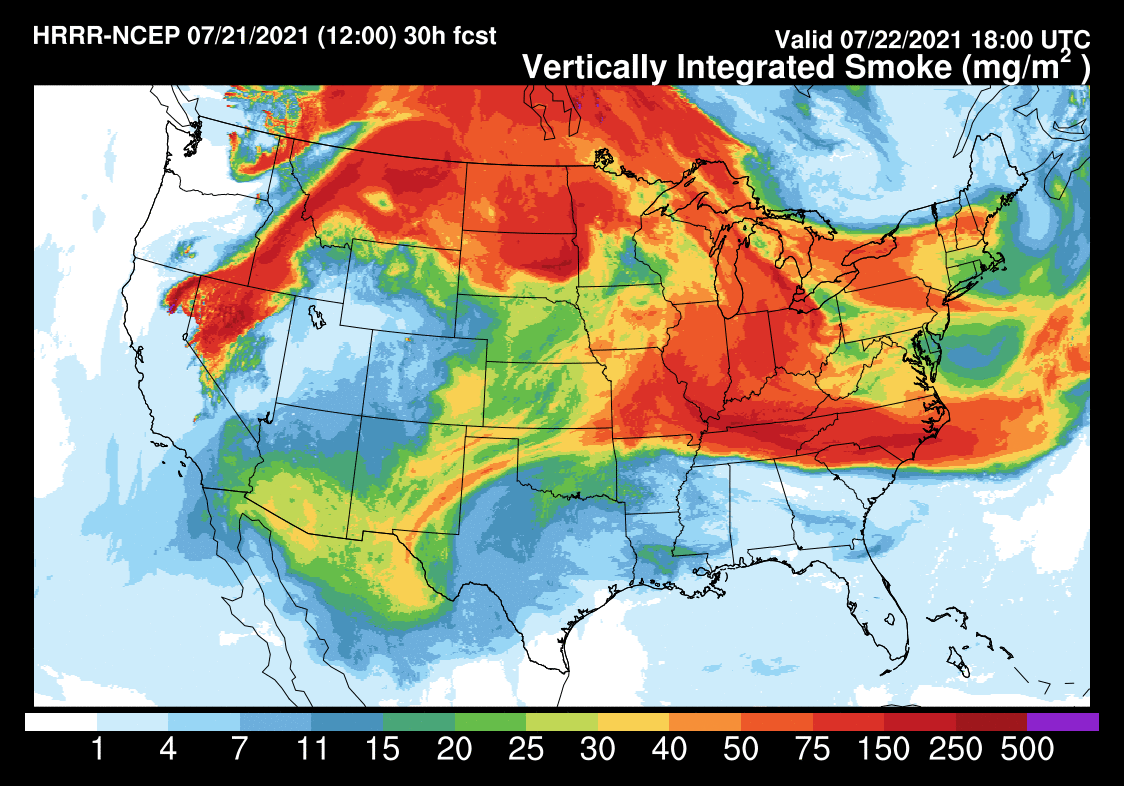 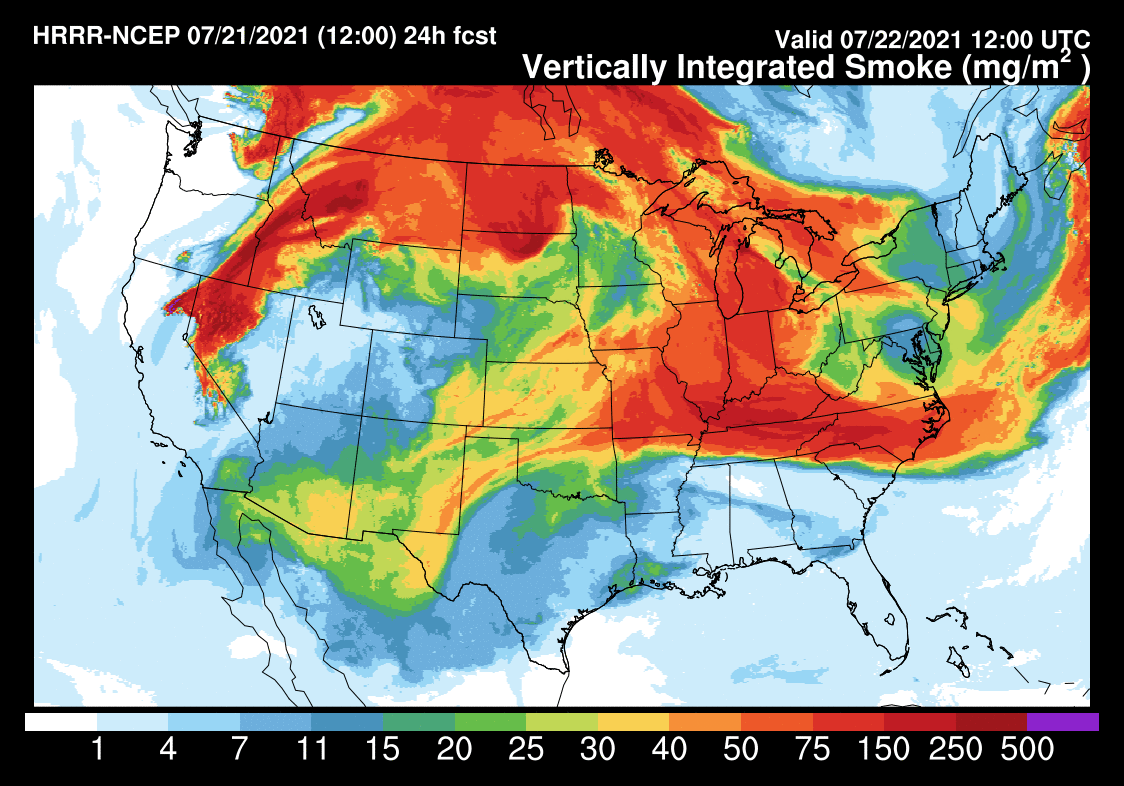 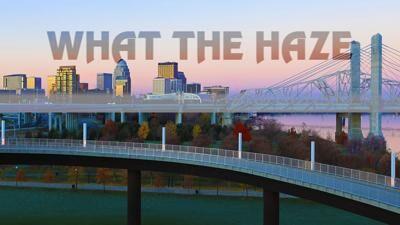 If you have headed outside the past couple of days you may have noticed that the air all around Louisville seems to be very hazy. Your eyes aren't fooling you, it is actually there and there's a reason behind it. one of which you might not expect to be in our area.

In case you haven't heard, there are a lot of wildfires ongoing out in the Western US and in portions of Southern Canada. Well, all of the smoke from the wildfires goes way up in the atmosphere and gets caught in the mid to upper level winds like the jet stream. This smoke has traveled across nearly the entire continental United States and all the way into our area.

If we look at satellite and radar imagery from this morning, it shows mostly clear skies because well, there isn't much cloud cover out there whatsoever. However, the smoke up in the atmosphere is causing the sky to look more cloudy and hazy.

When we look at forecasted maps for the smoke over the area, you can see it is sticking around for the rest of today, and likely beyond today as well. The smoke is going over and around the high pressure currently situation over the Midwest and ending up over our area and many other states across the country.

This map is for around 4PM this afternoon, and you can see we are under the dark red area of the map, signifying that the smoke above Kentuckiana is very thick.

The smoke continues to stick through the day and into the evening time, still in time for sunset.

You may have noticed that the past few days that our sunrises and sunsets have been extremely vibrant in reds and oranges. The smoke is the culprit to this. Why? Smoke particles are much larger than just regular air molecules and are better at scattering the yellow, red and orange wavelengths of sunlight. The enhanced oranges, reds and pinks during sunset when the sun’s rays have to travel through more smoke. That happens when the sun is very low near the horizon rather than when it is directly overhead, hence the fiery sunsets and sunrises. The added smoke particles scatter out the blue and violet light even more, bringing out more of the red light. The more smoke particles there are, then the more red the sun will appear.

This smoke isn't forecasted to go away quickly either and will stick around for all of Thursday as well. Here is the smoke at sunsrise tomorrow.

and here is the forecasted smoke for tomorrow afternoon

Wind speeds remain below 10mph so the smoke has nothing to push it out of our area just yet.

Check out some of the photos from our viewers of the recent sunrises and sunsets!

For those of you concerned about air quality, here's what we are looking at. An air quality alert has also been issued for our area for the rest of the day today and for Thursday. People with heart and lung disease should reduce exposure. This alert is in effect for fine particles because of the smoke, not because of unhealthy levels of ground ozone.

That being said, today and tomorrow will be unhealthy for sensitive groups.