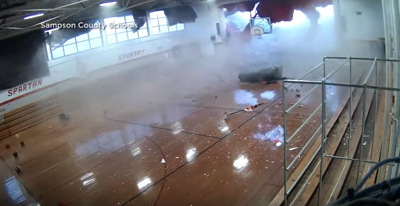 Watch this scary video from inside a Sampson County school in NC that shows children running as a intense winds tears part of the gym’s roof and part of the wall.

The National Weather Service said that a “microburst was responsible for the damage that occurred” to Union Intermediate School.

According to the NWS survey team in Raleigh, this happened on Monday around 1:30 pm EST and injured 3 people. The estimated wind speeds were 80-85 mph! The winds snapped and uprooted trees and caused some significant roof uplift and a partial collapse of the school's gym wall. The damage and radar data confirms the event was due to straight line winds and not a tornado.

What is a microburst?

It is a column of sinking air within a thunderstorm. They can cause extensive damage at the surface, and in some instances, be life-threatening. Learn more about microbursts here.

A damage survey team from our office has confirmed that a microburst was responsible for the damage that occurred to Union Intermediate School in Sampson County, #NCwx yesterday. More info: https://t.co/1TT3reL1F9 pic.twitter.com/JvB59PizXF