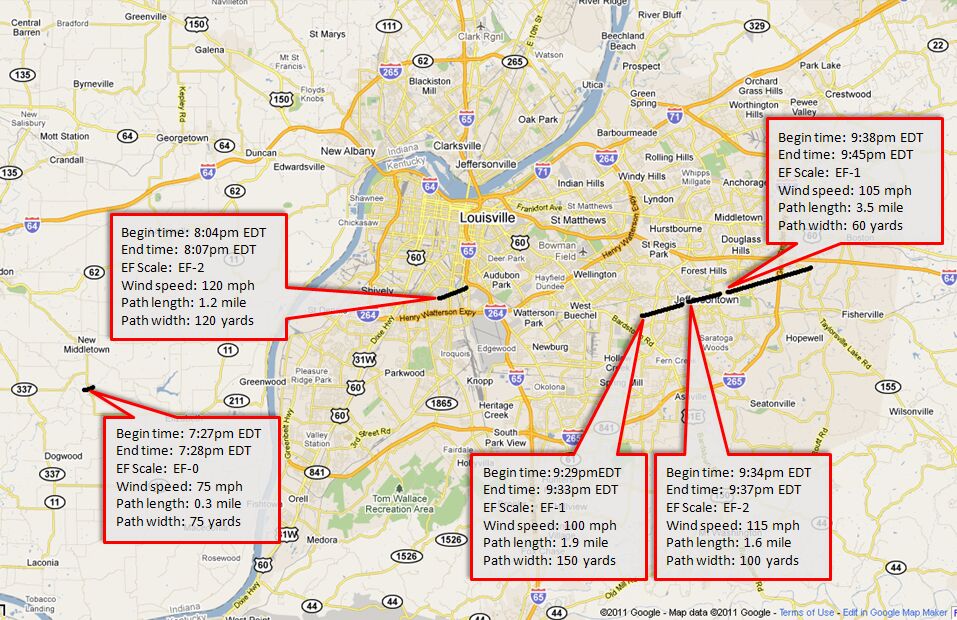 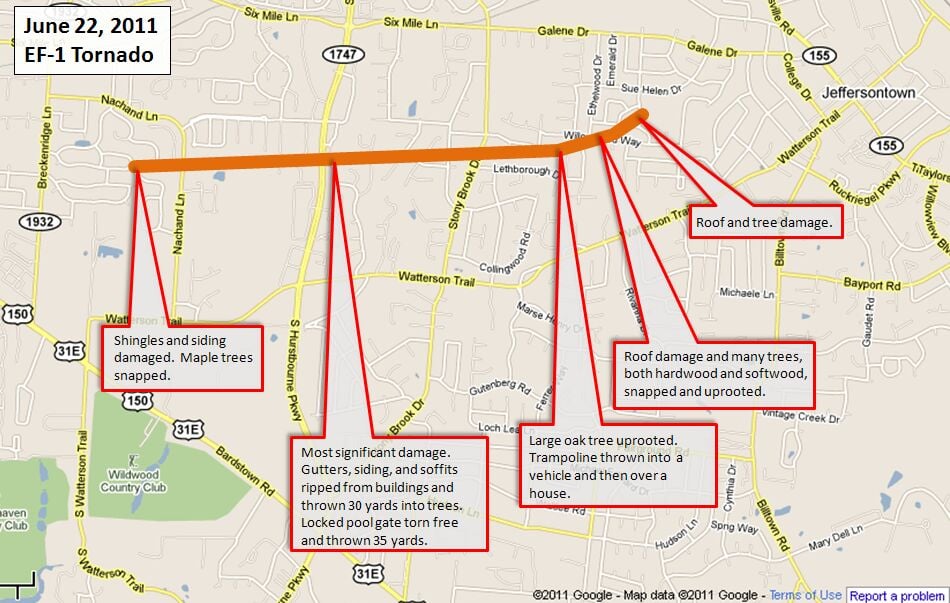 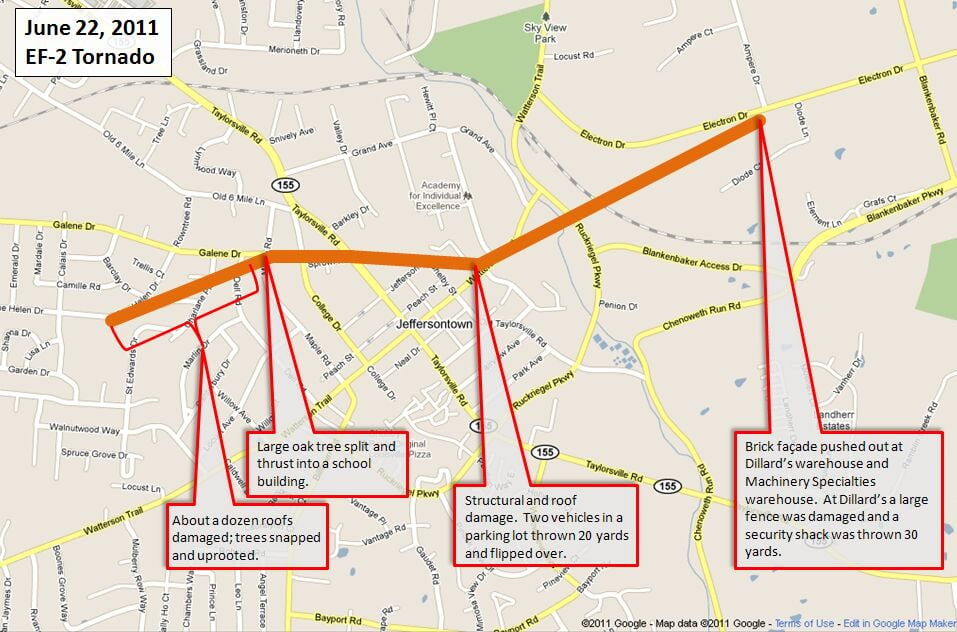 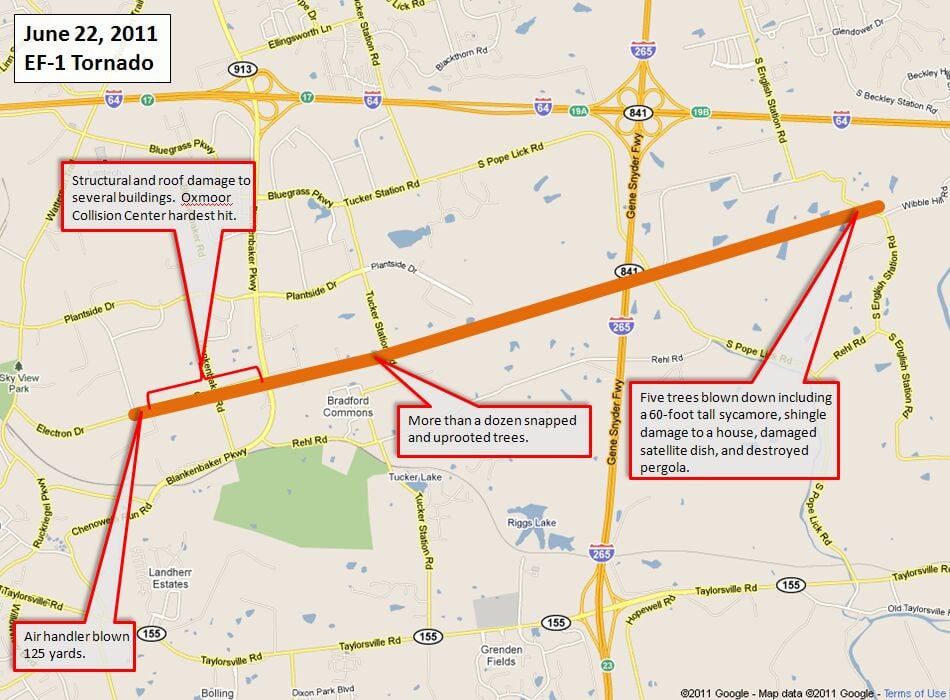 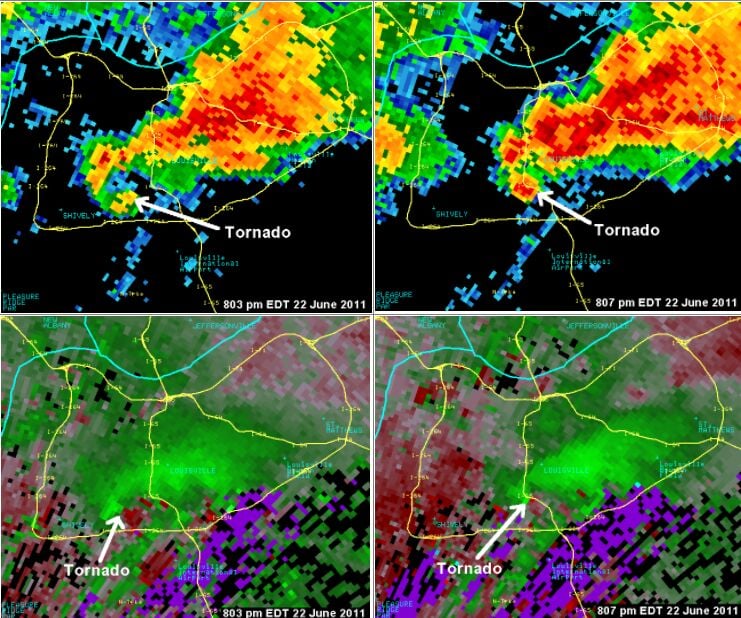 The NWS in Louisville put together this detailed summary of the event...

Begin point:  Near the intersection of Longfield Avenue and Bellevue Avenue at the Churchill Downs horse barns, 3.8 miles south of downtown Louisville

End point:  Near the intersection of Crittenden Drive and Central Avenue, 3.5 miles south of downtown Louisville

Injuries:  0 (either human or equine)

This tornado touched down at Churchill Downs with EF-1 strength and wind speeds of up to 105 mph.  Five barns at the race track had large sections of their roofs blown off and cinder block walls buckled or collapsed.  Christ Church on Churchill Downs had some roof and siding damage.  As the tornado moved east it strengthened to EF-2 intensity near the intersection of Floyd Street and Central Avenue where a large industrial building was heavily damaged.  Numerous trees were uprooted and snapped along the storm's path.  Near the intersection of Crittenden Drive and Central Avenue a Super 8 Motel had minor roof damage.

At the start of the path the tornado was EF-0 strength as it damaged shingles and siding and snapped maple trees.  At Orchard Lake Boulevard and Fallen Apple Lane trees were blown down and laid out in north, northeast, and south directions.  The tornado moved into the Hurstbourne Woods subdivision and ripped a locked pool gate free and threw it over a building and 35 yards downwind.  This location suffered the worst damage with gutters, siding, and soffits ripped from buildings and deposited 30 yards away in trees.  Next a large oak tree was uprooted at 3705 Modesto Road and a trampoline was thrown into a Volkswagen and then over a house.  At 9407 Willowwood Way there was roof damage and many trees, both hardwood and softwood, were snapped and uprooted.  The tornado briefly made about a 25 degree turn to the northeast just before dissipating and causing some roof damage and tree damage at its end point.

This tornado began just east of the end of the previous tornado and began by damaging roofs of about a dozen houses and uprooting and snapping trees along Saint Edwards Drive.  Damage was also observed along Charlane Parkway and Dell Road.  At the corner of Maple Road and Galene Drive a significant portion of a large oak tree split off and was thrust into a wall of Tully School.  There was also structural damage and roof damage at the Good Samaritan Society Nursing Home at 3500 Good Samaritan Way.  Two vehicles in the parking lot were thrown about 20 yards and flipped over.  Low end EF-2 damage was observed.  The storm continued to the east and apparently lifted off the ground as the ground surface descended into a small valley along Ruckriegel Parkway and Chenoweth Run.  The tornado again caused damage on Electron Drive at the Dillard's Warehouse and Machinery Specialties Warehouse.  At those locations the brick facade of each building was pushed out.  A large fence around the Dillard's Warehouse was damaged and a security shack was thrown about 30 yards.  The tornado lifted on the south side of Electron Drive.

Path length:  3.5 miles (though the tornado was not in complete contact with the ground for its entire length)

The tornado touched down on the north side of Electron Drive at Ampere Drive just to the northeast of the end point of the previous tornado.  An air handler was blown off of the roof of JCK Enterprises and thrown 125 yards.  Farther east on Electron Drive several corporations and warehouses had structural damage to roofs and the sides of buildings.  The most significant damage was at Oxmoor Collision Center where there was structural damage to some steel framing and stucco.  RBI Corporation, next door, also had some structural damage.  More than a dozen uprooted and snapped trees were observed around the Tucker House Bed and Breakfast at 2406 Tucker Station Road.  The rope-like tornado lifted between Tucker Station Road and Interstate 265.  However, the tornado touched back down again just on the other side of the interstate at 1600 South English Station Road as an EF-0.  At this location damage included five trees blown down including a 60-foot tall sycamore, shingle damage to a house, a damaged satellite dish, and a destroyed pergola.

The images below show radar data from the NWS Doppler Radar during the evening of June 22, 2011. The top two images are "reflectivity" showing the supercell storm which produced a tornado at Churchill Downs race track. The tornado is located in the "hook" area on the southwest side of the supercell. Very heavy rain (but no damage) is observed in the main portion of the storm (red colors). The bottom two images are "storm-relative velocity" images. The identified red-green couplet is the location of the tornado as sampled by the radar.