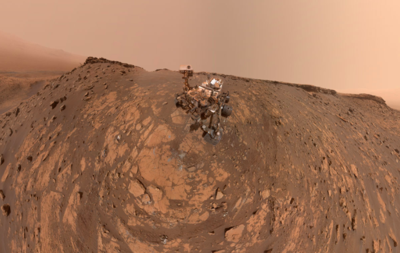 The interplanetary robot snapped this epic selfie right before setting a record for the steepest terrain it has ever climbed. The giant hill Curiosity climbed is known as the "Greenheugh Pediment," which is a broad sheet of rock that sits atop a hill. And before doing that, the rover took a selfie, capturing the scene just below Greenheugh. The picture is actually a 360 degree panoramic shot made up of 86 images.

This climb also caused the robot to tilt a record 31 degrees. But don't worry! The rover is never in danger of tilting so much that it would flip over. Curiosity's wheel system enables it to tilt up to 45 degrees safely. This is the latest big achievement and development as rover climbs Mount Sharp which is 3 miles tall!

How Does Curiosity Take Selfies?

Before the climb, Curiosity used the black-and-white Navigation Cameras located on its mast to, for the first time, record a short movie of its "selfie stick," otherwise known as its robotic arm.

Curiosity's mission is to study whether the Martian environment could have supported microbial life billions of years ago. One tool for doing that is the Mars Hand Lens Camera, or MAHLI, located in the turret at the end of the robotic arm. This camera provides a close-up view of sand grains and rock textures, similarly to how a geologist uses a handheld magnifying glass for a closer look in the field on Earth.

By rotating the turret to face the rover, the team can use MAHLI to show Curiosity. Because each MAHLI image covers only a small area, it requires many images and arm positions to fully capture the rover and its surroundings.

"We get asked so often how Curiosity takes a selfie," said Doug Ellison, a Curiosity camera operator at JPL. "We thought the best way to explain it would be to let the rover show everyone from its own point of view just how it's done."