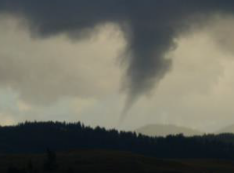 Check this out! A waterspout was spotted on Kentucky lake Monday, which is near the Tennessee border.

What we believe is a "cold air funnel" on Kentucky Lake, near the US 79 bridge at Paris Landing on November 11. Taken by Stan Wooding. @NWSMemphis @NWSPaducah pic.twitter.com/FHt5fkOfb4

Let's take a minute to break down the difference between cold air funnel, waterspout, and tornado. Unfortunately these things don't come with a sign labeling exactly what they are.

A cold air funnel is a funnel cloud that forms in a cool air mass.  These are usually "high based," meaning they form higher up in the atmosphere. They can look scary but rarely get near enough to the ground to be threatening.  There was a cool air mass in our area on Veterans Day, which may be why this tweet suggests it could have been a cold air funnel.

The reason I (Hannah) classified this image as a waterspout is because there is clear contact with the surface of the water.  A funnel cloud, by definition,  just hangs in the air and does not touch the ground. Another marker used to distinguish between a waterspout and a funnel cloud is how smooth the feature looks. Waterspouts and tornadoes are rotating with more strength, so they look more smooth. A funnel cloud is not spinning as fast, so the edges look less smooth.

By definition a waterspout is basically a tornado over water. It can also be defined as a non-supercell tornado over water. A tornado is a rotating column of air in contact with the ground capable of causing damage. You can compare the three images in this post to help distinguish these features.  In order from top to bottom the pictures show a funnel cloud, waterspout, and tornado.