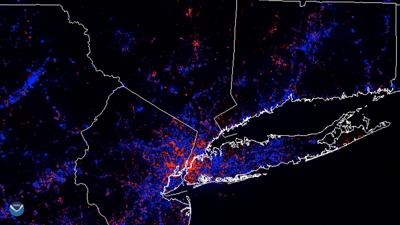 Tapping into data from the NOAA/NASA Suomi NPP satellite’s Day/Night Band (DNB), NOAA’s Joint Polar Satellite System (JPSS) colleagues at the Cooperative Institute for Research in the Atmosphere (CIRA), Cooperative Institute for Meteorological Satellite Studies (CIMSS), and the Colorado School of Mines (CSM) examined the difference in illumination of urban and suburban lights between February 2020 and March 2020. By doing so, the scientists were able to detect areas of dimming (blue), and in some cases brightening (red), of nighttime lights from the Mid-Atlantic to New England. During this time, there was a noticeable decrease in nighttime lights in several locations, including Staten Island, central Long Island, Upstate New York, eastern Pennsylvania, and much of Connecticut. Elsewhere, nighttime illumination increased in some spots, like Manhattan, Brooklyn, northeastern New Jersey, extreme eastern Long Island, and central Massachusetts.

In explaining the slight uptick in illumination on the Hampton shores of Long Island, CIRA Senior Research Scientist Steve Miller speculates that these, “may be cases of people who usually live in NYC in the winter months having relocated to their summertime residences early, due to the slowdown.”

Chris Elvidge, former NOAA scientist and now at CSM, says the DNB has been used in the past to detect dimming of lights and power outages for individual events. “We’ve used it for hurricanes, earthquakes and in conflict zones,” Elvidge explains, “But the worldwide COVID-19 pandemic offers scientists their first opportunity to observe the dimming of lights across entire countries and continents.”

“There is a story—or perhaps better put, a riddle—behind every DNB light change that we see at this stage of the pandemic,” Miller adds. “It’s tied to human behaviors, economic drivers, and vulnerabilities down to the local scale. From a practical perspective, what we learn from images like these can help inform planners on how best to ready ourselves for potential future pandemics. For example, significant light decreases can point to what businesses have closed during a pandemic, while light increases show areas of still-running critical infrastructure or show where people moved during it.”

The DNB sensor is part of the Visible Infrared Imaging Radiometer Suite (VIIRS), one of the key instruments onboard the Suomi NPP and NOAA-20 polar-orbiting satellites. For this composite image, DNB images were processed to identify and remove pixels containing clouds, aurora, airglow, lightning and other transient sources of light that would obscure the lights of human activity. Learn more about Earth at night as seen from VIIRS at The Black Marble.