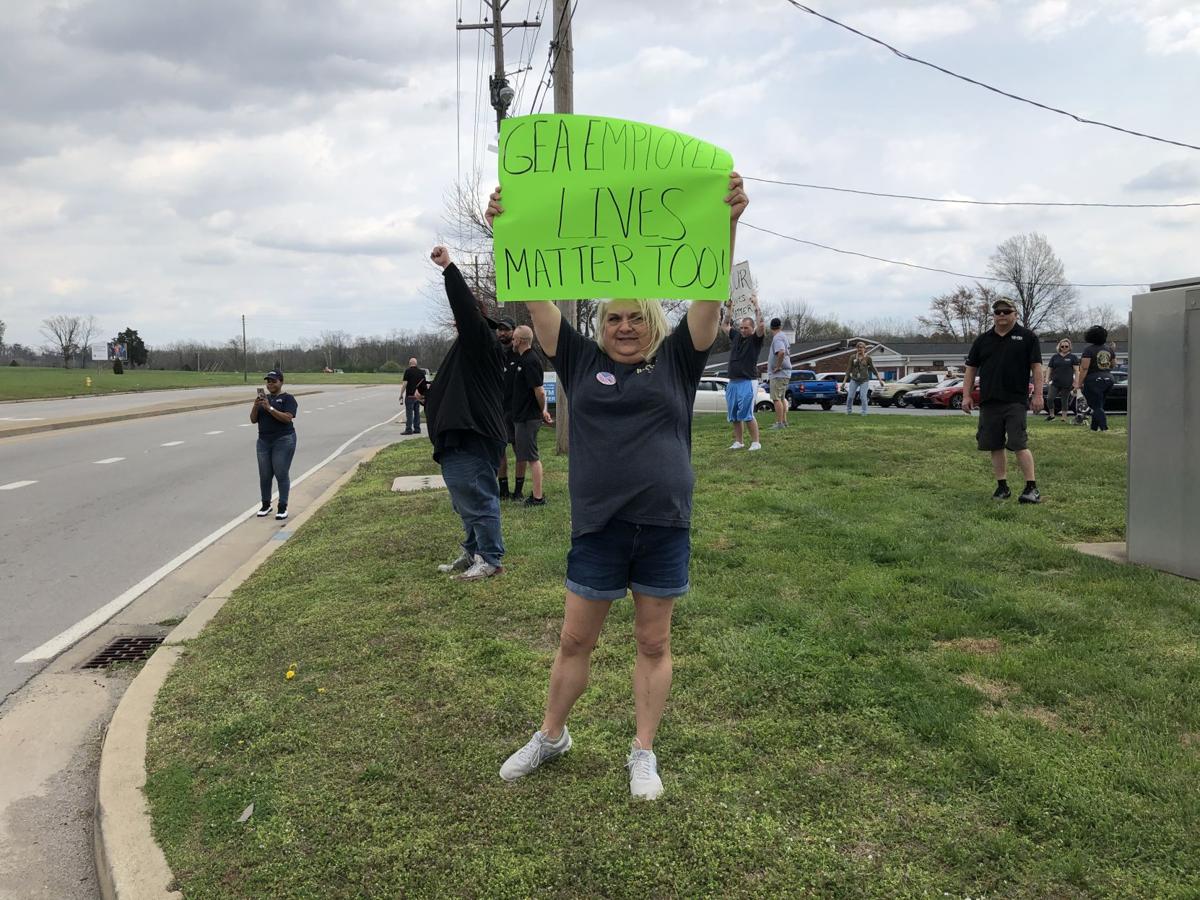 Workers at GE Appliance Park rallied on Saturday, March 28, 2020 to protest the company's plan to resume production amid the COVID-19 outbreak. 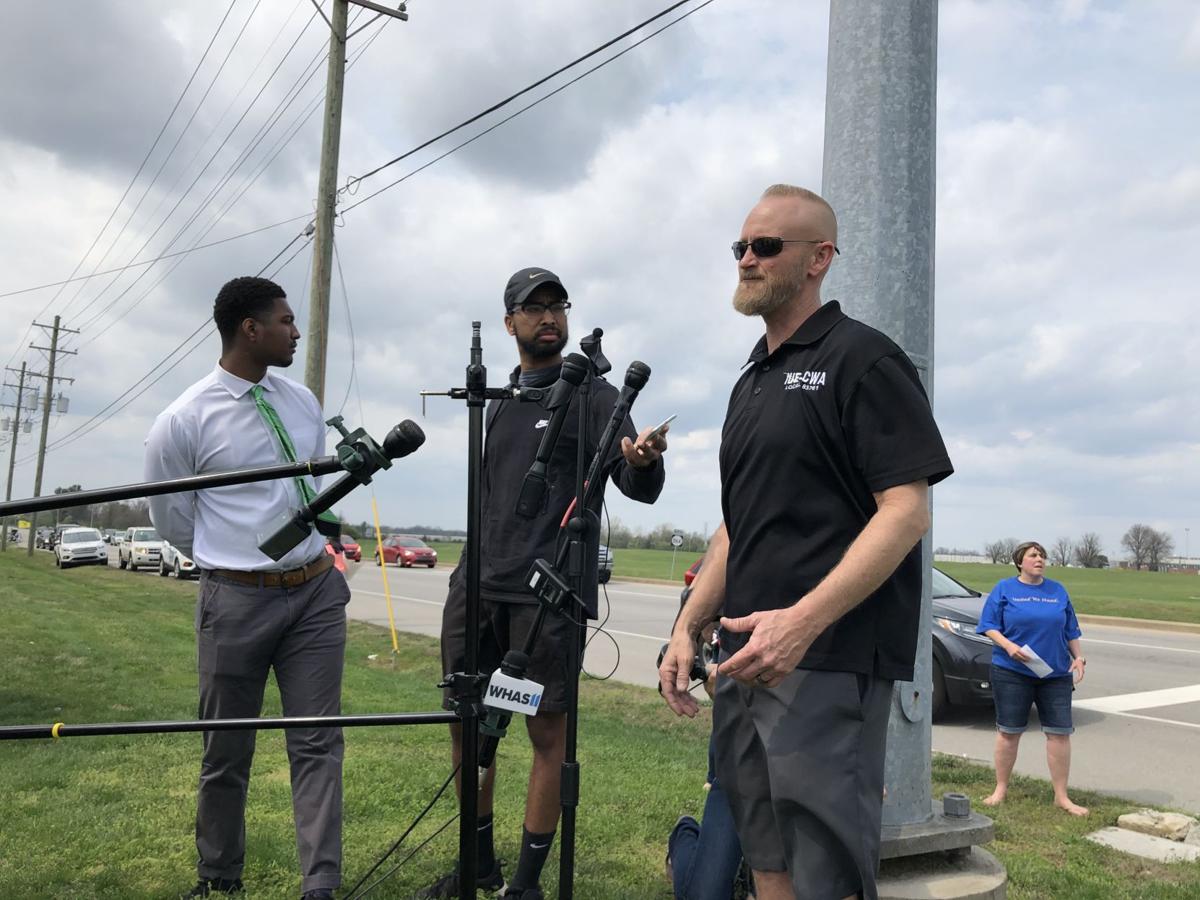 Workers at GE Appliance Park rallied on Saturday, March 28, 2020 to protest the company's plan to resume production amid the COVID-19 outbreak. Dino Driskell, president of IUE-CWA Local 83-761, speaks to the media.

Workers at GE Appliance Park rallied on Saturday, March 28, 2020 to protest the company's plan to resume production amid the COVID-19 outbreak.

Workers at GE Appliance Park rallied on Saturday, March 28, 2020 to protest the company's plan to resume production amid the COVID-19 outbreak. Dino Driskell, president of IUE-CWA Local 83-761, speaks to the media.

LOUISVILLE, Ky. (WDRB) – A cacophony of car horns rang for about an hour on Saturday afternoon at the southern edge of GE Appliance Park as factory workers expressed frustration about having to return to work on Monday amid the COVID-19 outbreak.

Workers who showed up to the union-organized rally – which took the form of an auto caravan to maintain social distancing – said they were underwhelmed by a number of safety measures GE Appliances revealed on Thursday, including mandatory temperature screens and plastic dividers resembling shower curtains placed between workstations on assembly lines.

Larry Francis, an Appliance Park worker, said Louisville-based GE Appliances should follow the lead of companies like Churchill Downs – which postponed the Kentucky Derby and furloughed many workers – instead of trying to maintain production amid the pandemic.

“It’s ludicrous to think that everybody is taking these steps to do this, and somebody is willing to take the chance on infecting the community,” Francis told WDRB. “It’s just not right.”

Dino Driskell, president of the IUE-CWA Local 83-761, the union that represents about 3,800 rank-and-file workers at Appliance Park, said the manufacturing complex’s current shutdown that started a week ago should be extended for at least two weeks out of caution.

Quite a scene out here at @GEAppliancesCo worker rally. they are scheduled to return to work tomorrow amid covid outbreak pic.twitter.com/gxHSsJIg6a

He said the union has been overwhelmed with calls from workers upset about having to return to the assembly line.

In a written statement, GE Appliances touted the “new and innovative measures” implemented this week “that will support an adaptive work environment during this pandemic.”

“Workspaces were adjusted to achieve appropriate social distancing. Assembly line workstations have been separated by six feet or by installation of plastic dividers. Additional supplies will be provided to employees to support employee protection. Additionally, robust cleaning protocols have been enacted throughout the buildings along with temperature scans upon entry,” GE Appliances spokeswoman Julie Wood said in the statement.

The company also suggested it might make exceptions to its attendance policies for workers who have no childcare, as those facilities are closed by order of Gov. Andy Beshear, and other complications:

“We understand employees have unique personal circumstances regarding childcare and eldercare for which we encourage them to contact us to evaluate each case and find the best solution for each individual. As we face this unprecedented crisis together, we will continue to focus on the health and well-being of our employees, customers, and owners.”

Many of the workers at Saturday’s rally directed anger not only at GE Appliances but at Beshear, who has ordered many businesses – day cares, movie theaters, some stores – to close but allowed manufacturers such as GE Appliances to remain open.

Beshear said at his daily news conference that GE Appliances has made “significant changes“ at Appliance Park but he is aware that workers ”aren’t necessarily satisfied” with the measures.

“Ultimately we need to get to a place where people feel safe coming to work, and we hope we can get to that point,” Beshear said.

While big employers like Ford Motor Co. and Amazon have confirmed cases of the virus among their Louisville workers, no cases have been confirmed at Appliance Park.

Kimberly Owen, 60, said she was nervous when she last left work at the park on March 20, as it seemed many co-workers had colds.

“I just stood there and said to myself, ‘God if you get me out of this alive, I will not come back. I will not,’” said Owen.

A 27-year veteran of the park, Owen said she plans to use her five weeks of vacation and other time off so that she doesn’t have to return next week.

But, she said, “not everybody has that luxury.”