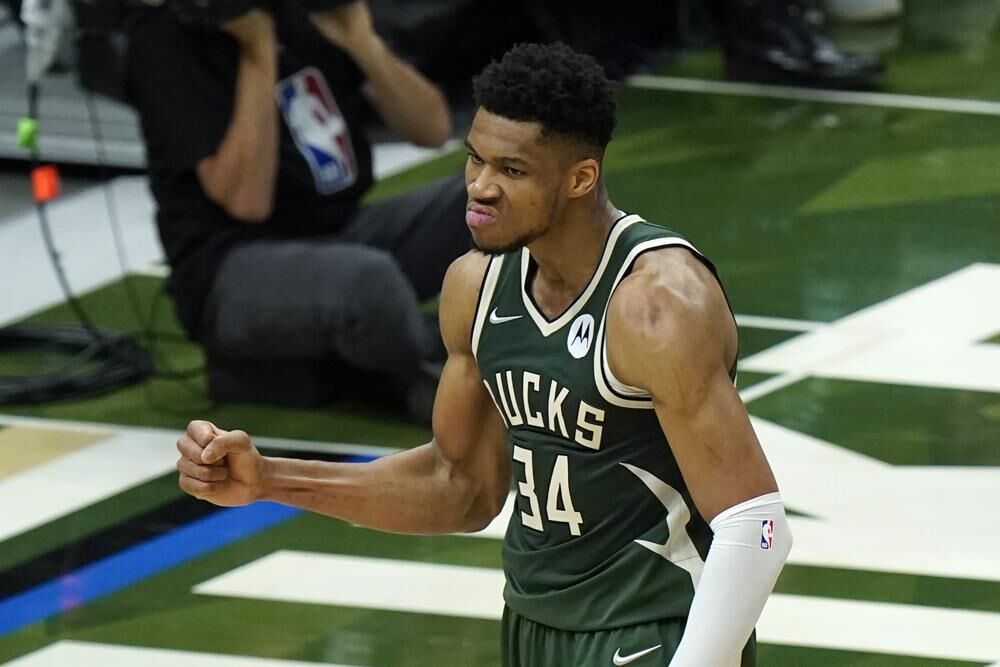 Milwaukee Bucks forward Giannis Antetokounmpo reacts to a basket against the Phoenix Suns during the first half of Game 3 of basketball's NBA Finals in Milwaukee, Sunday, July 11, 2021. Milwaukee won 120-100. (AP Photo/Paul Sancya) 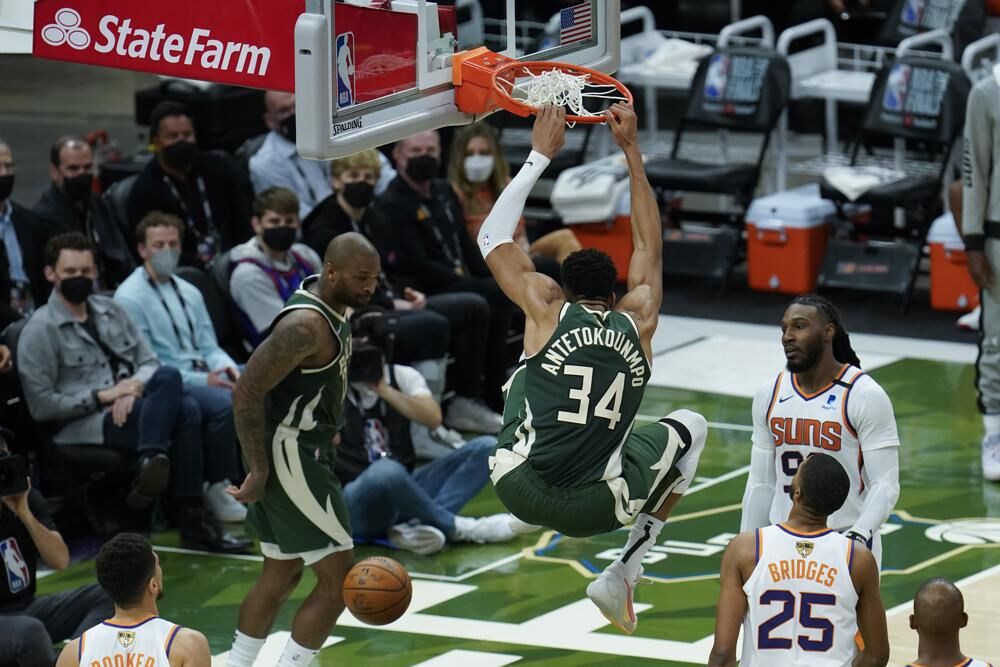 Milwaukee Bucks' Giannis Antetokounmpo (34) dunks during the first half of Game 3 of basketball's NBA Finals against the Phoenix Suns in Milwaukee, Sunday, July 11, 2021. (AP Photo/Paul Sancya)
1 of 2

Milwaukee Bucks forward Giannis Antetokounmpo reacts to a basket against the Phoenix Suns during the first half of Game 3 of basketball's NBA Finals in Milwaukee, Sunday, July 11, 2021. Milwaukee won 120-100. (AP Photo/Paul Sancya)

Milwaukee Bucks' Giannis Antetokounmpo (34) dunks during the first half of Game 3 of basketball's NBA Finals against the Phoenix Suns in Milwaukee, Sunday, July 11, 2021. (AP Photo/Paul Sancya)

LOUISVILLE, Ky. (WDRB) — Over the next eight days, a billion words will be written about the 2021 NBA Draft.

Videos will be analyzed as closely as the Zapruder film. Statistics will crunched, shuffled, evaluated, shuffled and crunched. Respected media outlets will deliver daily updates of their mock drafts.

But this is the question that should loom over the draft:

How did Giannis Antetokounmpo, the best basketball player in the 2013 Draft, last until the 15th pick with the Milwaukee Bucks?

One of the highlights of 13 great years I did the @NBADraft Night. Congrats, Giannis! https://t.co/aPXqsnK83Y

Why wasn’t there one reasonable basketball person who believed that Giannis was better than Anthony Bennett, Cody Zeller, Nerlens Noel, Shabazz Muhammad and 10 other guys taken ahead of him?

I respect NBA scouts and personnel. They show up at venues week after week compiling information about what guys can do on and off the court. They can give you a breakdown on the back-up point guard at Coastal Carolina.

But, wow, did they whiff on a guy who just carried Milwaukee to its first NBA title in 50 years.

What did they miss?

“I don’t think they missed anything,” said Fran Fraschilla, the analyst who was the go-To guy on ESPN’s coverage of foreign players in 2013.

“That 2013 draft was one of those draft where there wasn’t a clear No. 1 pick and (Cleveland) took a chance on Anthony Bennett.

“Giannis was about 6-8 at the time. He was pretty athletic and knew how to play. I don’t think anybody expected him to grow three inches and become what he is today.”

Fraschilla is correct. There is a reason he was seated in the seats, not on the floor in the Green Room with the top prospects on draft night at the Barclays Center in Brooklyn.

What Antetokounmpo is today is the toast of basketball. On Tuesday night, when Milwaukee defeated Phoenix, 105-98, in Game 6 to secure its title, Giannis hung 50 points, 14 rebounds and 5 blocks on the Suns. Veteran NBA observers said it was the most remarkable performance in the NBA Finals since Michael Jordan or Magic Johnson.

Johnson was selected first in 1979.

Jordan was picked third in 1984 (behind Hakeem Olajuwon and Sam Bowie).

Fraschilla said that at least two teams that drafted ahead of Milwaukee had scouts that wanted their franchise to draft Antetokounmpo. Top executives of those teams opted for college players instead.

“There was a European camp near Treviso, Italy about three weeks before the draft,” Fraschilla said. “That was the first time a lot of the decision makers actually got to see him. He was very good but he wasn’t the player he is today.”

Let’s go back and call the roll of guys taken ahead of Antetokounmpo. Read it and flinch, starting with the first overall pick.

Anthony Bennett, forward, from UNLV to Cleveland — Absolutely in the running for the worst overall No. 1 pick of all time, ahead of Michael Olowakandi and neck-and-neck with LaRue Martin. Has not played in the NBA since 2017 and never averaged more than 5 points per game.

Victor Oladipo, guard, from Indiana to Orlando — Made two all-star teams but injuries have knocked him off that track. Has bounced from Orlando to Oklahoma City to Indiana to Houston to Miami.

Otto Porter, forward, from Georgetown to Washington — Nice player. At times, a good player. But not close to the third-best player in the draft. On his third team and has never advanced past the conference semifinals in the playoffs.

Alex Len, center from Maryland to Phoenix — Supposed to be a big man who can shoot but has averaged 8 points and 6 boards over eight seasons. Washington is his fifth team.

Nerlens Noel, center from Kentucky to New Orleans — Premier shot-blocker who was quickly traded to the Sixers. Has averaged double figures once in eight seasons. The Knicks are his fifth team.

Ben McLemore, guard, from Kansas to Sacramento — Prolific college scorer who has averaged less than 9 points for four teams. Has started 28 games the last three seasons.

Kentavious Caldwell-Pope, a guard from Georgia to Detroit — Another big-time shooter who actually won a ring while starting 26 games for the Lakers in 2020. Has averaged 11.4 points.

Trey Burke, guard, from Michigan to Minnesota — Burke was traded to Utah on draft night and Jazz are one of six teams that have tried him at point guard. People fell in love with Burke after he led Michigan to the NCAA championship game. He’s a backup.

C.J. McCollum, guard, from Lehigh to Portland — The Blazers have no reason to blush. McCollum has averaged nearly 19 points per game and been a dependable player the last six years.

Michael Carter-Williams, guard from Syracuse to Philadelphia — Named Rookie of the Year during his first season in Philly, but the Sixers soured on his shooting issues. He’s bounced from Philadelphia to Milwaukee to Chicago to Charlotte to Houston to Orlando. Just a guy.

Steven Adams, center, from Pitt to Oklahoma City — Solid rebounder and defender in OKC during the time he played with Kevin Durant and Russell Westbrook but the Thunder went a different direction when they traded him to New Orleans last November.

Kelly Olynyk, forward, from Gonzaga to Dallas — A draft night trade sent him to Boston, where he stayed for four reasonable seasons. After three-and-a-half seasons in Miami, the Heat sent him to Houston for the final 27 games of this season. Probably worth the 13th pick.

Shabazz Muhammad, from UCLA to Utah — How many schools shrieked in agony when Muhammad chose UCLA instead of their favorite college program? He was the must-have recruit in the Class of 2012, ranked behind only Noel.

Muhammad has not played in the NBA since 2018.

“Give the credit to Milwaukee for believing in him and to Giannis for making himself into a champion,” Fraschilla said.