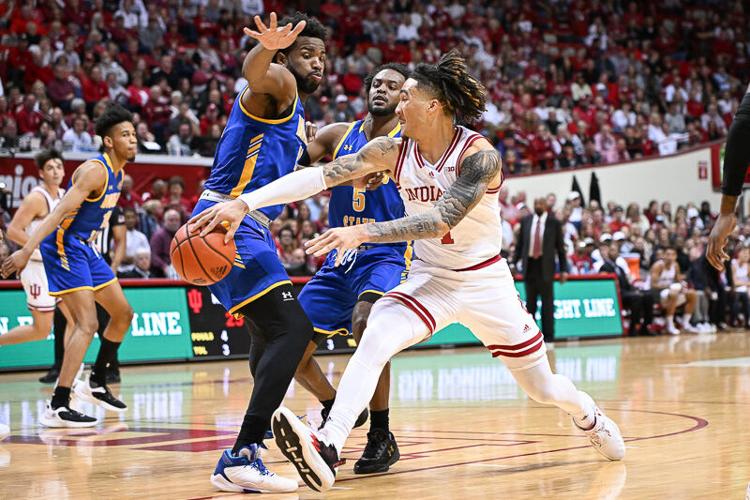 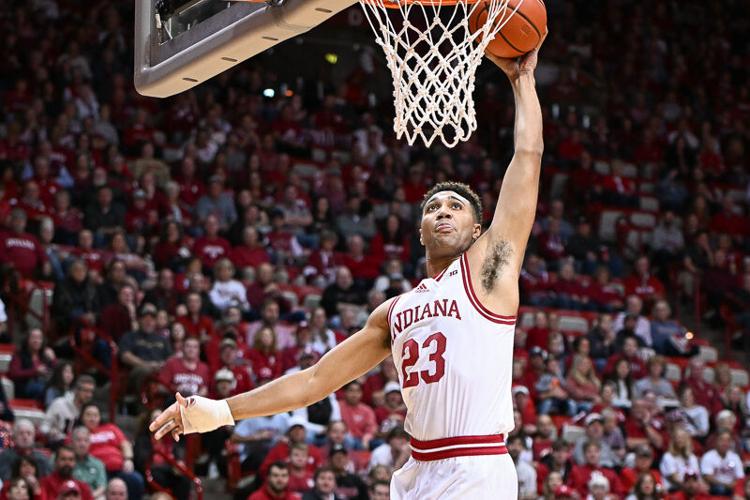 No, not the predictions that Mike Woodson’s team is the one to beat in the Big Ten, a team that began the season ranked 13th in the Associated Press poll.

And not the word from NBA scouts that the Hoosiers’ best pro prospect isn't Trayce Jackson-Davis, now a senior who scored 15 points, moving past Greg Graham and Scott May into 13th place on IU’s all-time scoring list. When this season ends, odds are Jackson-Davis will trail only Steve Alford and Calbert Cheaney on that list.

The guy that has NBA scouts buzzing is Jalen Hood-Schifino, the freshman point guard projected to join Romeo Langford, Noah Vonleh and Eric Gordon as the Hoosiers’ only one-and-done players.

Hood-Schifino’s debut checked every box on his recruiting profile. He ran the team, generating four assists. He defended, helping the Hoosiers dog Morehead into 21 turnovers. He showed a dependable mid-range jumper while scoring seven points. He led an offense that made 61% of its shots, including 4 of 11 from distance.

"He can play with any unit," Woodson said. "He's been solid since he's been here."

But that’s not what I’m talking about. I’m talking about the story at The Athletic, where the Hoosiers out-polled Kansas, North Carolina, Gonzaga and the rest of America as the pick of the wise guys to be the nation’s most disappointing team.

“If the Hoosiers lose momentum or suffer an injury or two, they could go downhill in a hurry,” Seth Davis said.

And don’t forget the harshest cut from Geo Baker, the former Rutgers guard. Baker said something that you would expect from a guy whose team beat Indiana seven times in eight tries:

“Nobody is scared of Indiana …from a player’s perspective, no one is looking at them as, ‘damn, Indiana is the top dog.’ “

After 20 seasons spent mostly in the wilderness the critics and wise guys are correct. Indiana has not earned the respect that Michigan State, Wisconsin and Purdue have generated in more recent Big Ten times.

Anybody who thinks Woodson is simply running back the same team as the one that finished 21-14 and earned the final spot in the NCAA Tournament (and won one more tournament game than Kentucky, Connecticut, Alabama or Iowa) needs to employ a new research department.

Because this Indiana team isn’t that Indiana team — and not simply because the nine guys who returned are a year older with another season in Woodson’s system and Clif Marshall’s weight room.

"All I told our guys was to be ready to play. Because if you're not giving it to me I've got to get it from somebody else," Woodson said.

Defense remains Job One at Indiana. Woodson played here for Bob Knight. His DNA will not change. Morehead made 3 of its first six shots from distance. The Eagles' fourth three-pointer cut Indiana's lead to 21-20.

From that point, Morehead made only 5 of 18 shots from distance. The Eagles made only a third of their shots in the second half. Over the last 29 minutes, IU outscored the visitors, 67-32.

"You hold them to 24 points in the second half, I'd say we defended fairly well,: Woodson said.

Hood-Schifino plays with serious poise and an efficiency of movement. Malik Reneau, another 5-star recruit, played with Hood-Schifino at Montverde Academy (not IMG) in Florida and joined him at IU after de-committing from the Florida Gators. He’s a smaller but stronger version of Jackson-Davis, including the left-handed stroke. Reneau contributed 15 points and five boards.

"You can't speed him up," said Race Thompson, a sixth-year senior. "He's got really good footwork and ball fakes."

The four guys who replaced them — Hood-Schifino; Reneau; guard C.J. Gunn and forward Kaleb Banks — are likely to contribute more than the 15.1 points, 6.7 rebounds and 4 assists per game the four guys who left contributed. They’re also likely to shoot better than 35.9%.

"As a team we feel like we have 10 starters," said Thompson.

That will all be determined as the season unfolds. Indiana returns to Assembly Hall on Thursday to host Bethune Cookman, which was routed by Ohio State Monday. The Hoosiers' first test will come Nov. 18 at Xavier in the Gavitt Games.

North Carolina visits Bloomington at the end of the month. Arizona and Kansas loom in December. We’ll know then if it is safe to believe the hype in the Hoosiers.

"I've got a lot of pieces," Woodson said.