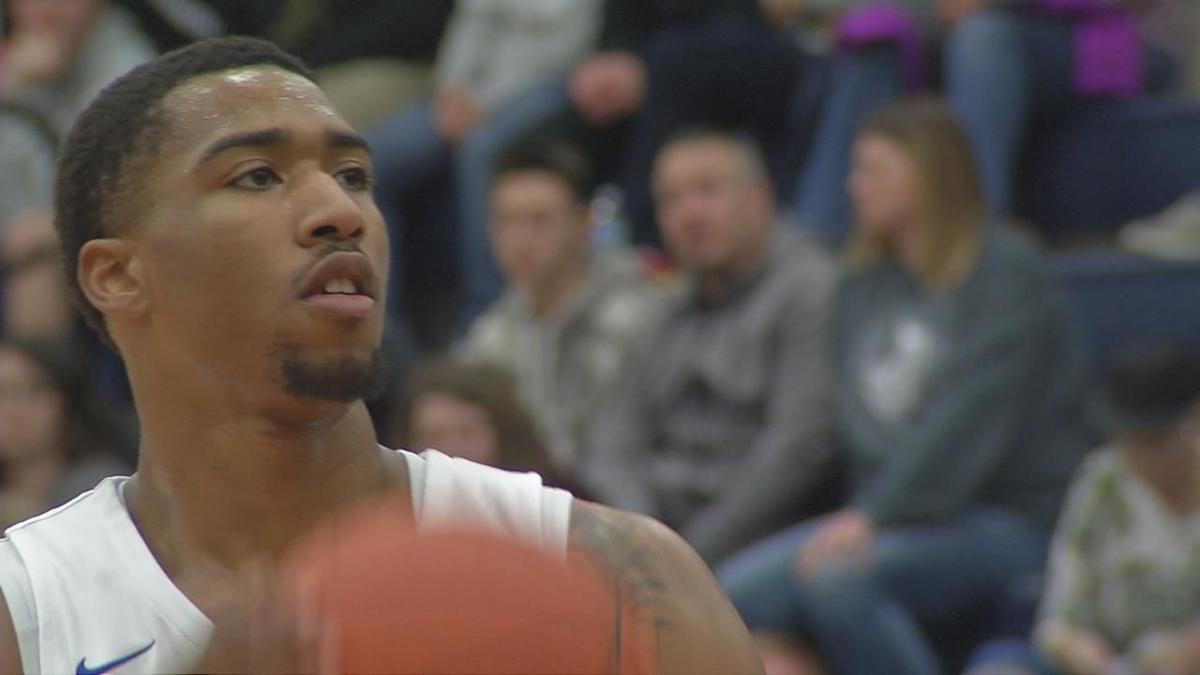 Jay Scrubb's father, Jason, has answers for all the NBA questions. 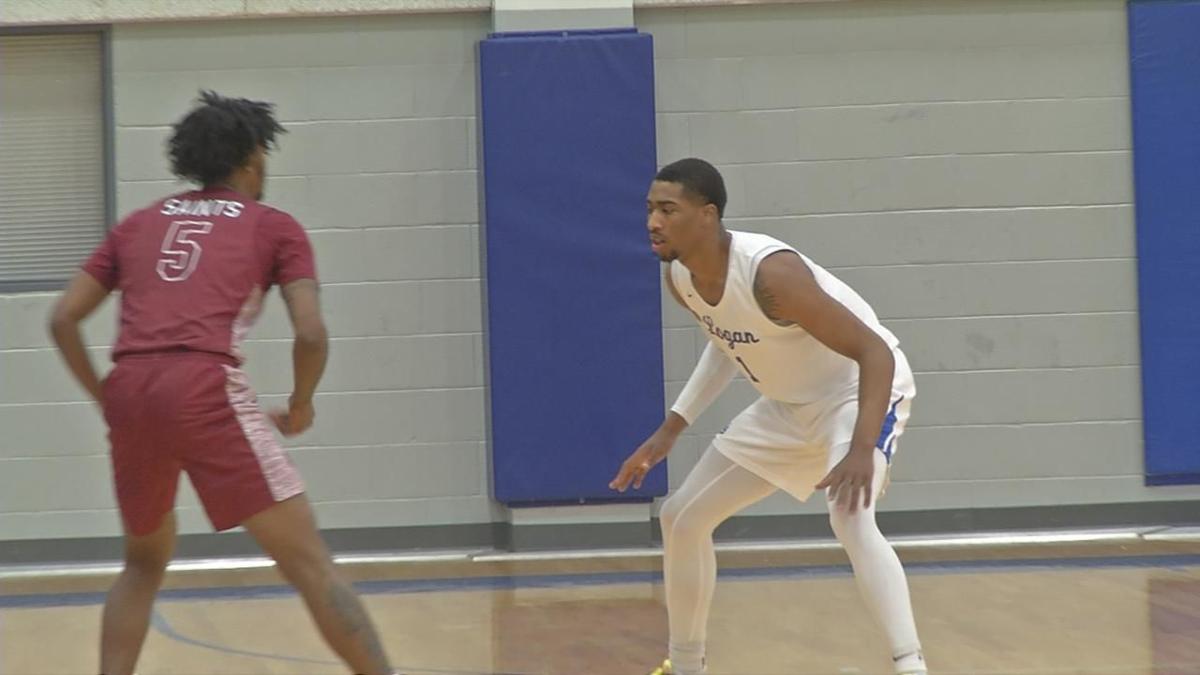 Jay Scrubb, right, a Trinity High School grad and junior college All-American, won't make his decision until his second season at John A. Logan College comes to an end.

Jay Scrubb committed to Louisville last fall but it bound for the NBA.

Jay Scrubb's father, Jason, has answers for all the NBA questions.

Jay Scrubb, right, a Trinity High School grad and junior college All-American, won't make his decision until his second season at John A. Logan College comes to an end.

Jay Scrubb committed to Louisville last fall but it bound for the NBA.

LOUISVILLE, Ky. (WDRB) — If you talk to Jason Scrubb, he will convince you the pressure is not on his son, Jay, to prove his decision to bypass the University of Louisville for the NBA is the wisest course.

Scrubb, the former Trinity High School star, is a junior-college phenom. But he has been drenched in disrespect the last two seasons. Junior college guys are supposed to whiff in the NBA. Skeptics have considered junior-college guys likely NBA failures for years.

No, Jason Scrubb said, the pressure is not on his son.

The pressure is on the NBA to get their evaluation of Jay Scrubb correct.

Do not be a team that makes a safe first-round pick and risks the embarrassment of having to explain why you passed on Scrubb after he develops into one of the best pro guards.

But, Mr. Scrubb: There hasn’t been a junior college player taken in the NBA Draft in 16 years?

“So,” Jason Scrubb said. “There hasn’t been a Jay Scrubb before.”

“I hate to sound like that,” he said. “But that’s OK that it hasn’t happened …

“Jay is special. I’m not just saying that because he’s my son. He just is. He’s a legit 6 foot 6 who can play any position. He’s strong with either hand. He’s not where he is for no reason."

“What are you looking at to show who is the best player?” Jason Scrubb said.

“You looking at size? (Edwards) is thicker. But is he stronger? No, I don’t think so because strength to me comes from who you are.

“If Jay sees Anthony Edwards under the basket, he’s going to try to dunk on him. You understand me? That’s the kind of kid that you want on your team.

“Jay’s what they call a ‘Dog.’ He’s competitive.

“So if you’re going to look at shooting, Jay can shoot better. Passing? We’ll give (Edwards) a tie. So what I’m saying is, ‘Where’s the difference?

“Because (Edwards) played at Georgia? Is that the difference? There’s a lot of questions because if that’s the case, (Georgia) stunk. They stunk up the joint.

“I’m just being honest. I don’t have any personal thing with him. I just know that he’s not better than Jay.”

How passionate, determined and confident is Jason Scrubb that Jay belongs in the first round of the 2020 NBA Draft whenever it unfolds?

On Monday I wrote a column about the 2020 NBA Draft outlook for guys from Louisville, Kentucky, Indiana and Western Kentucky. I shared the analysis from My Favorite NBA Scout, a guy whose player evaluations I have trusted for more than a decade.

My Favorite NBA Scout said Scrubb erred. Said he should have honored his commitment to U of L and demonstrated he could dominate the Atlantic Coast Conference.

The scout tossed history into the discussion, noting a junior college player has not been drafted since another former U of L signee, Donta Smith, was taken in the first round in 2004.

Jason Scrubb read what I wrote and made note of that.

Then he went to his computer and crafted a polite, thoughtful and spirited response of why his son’s decision was the right decision.

“Of course that’s what any (scout) would say,” Scrubb said. “That sounds good. But for a kid whose dream is to play in the NBA and who’s projected to go and has the opportunity to make his way … he’s used to working. He’s used to being the underdog. He has no problem with that.

“Because it’s basketball. It’s not like he’s going to be doing something else. They want to hold the junior college thing over his head?

I returned the e-mail and told Jason Scrubb I would love to talk basketball with him. That’s what we did Wednesday morning, for nearly an hour.

He shared the long-form version of the Jay Scrubb story. How Jason was born in New York City to parents of West Indian descent. How the family moved to Louisville before Jason’s teenage years. Jason said that he played two ordinary seasons for coach Mike Campbell at Butler High School.

How Jay was born in September 2000 and was primarily a spectacular baseball and football player as a child before he decided to focus on basketball at Noe Middle School after a growth spurt.

“Jay was a slugger because if you threw the ball in the vicinity of home plate, it’s going over the fence,” Jason Scrubb said.

“Jay is a freakish athlete. He could have been a quarterback or receiver.”

How Jay started at Central High School to play for Doug Bibby but his son didn’t do the necessary classroom work and never got eligible.

“This is the part where everybody critiques him and Jay takes the dip,” Jason Scrubb said. “He didn’t do well … he had his difficulties.”

How he had to repeat math, English and science courses after his freshman year and enrolled at Trinity High School, but was forced to sit out his sophomore season.

“That was the hardest summer of his life,” Jason Scrubb said. “Very hard. Then the first year at Trinity was a grind because he had to go every practice but didn’t get to play.”

How he played two solid seasons at Trinity but never moved firmly onto the Division I recruiting radar because his academics never made that possible.

“If his grades were right, he could have gone anywhere,” Jason Scrubb said. “And when I say anywhere, I mean anywhere.

“If his grades were right I think he would have been on Kentucky’s radar. North Carolina. Syracuse. All those places.

“Jay is more of a player than a student and that’s just always the way he’s going to be. That’s why he’s in the position he’s in.”

How the family selected John A. Logan Community College in Carterville, Illinois over a string of junior-college opportunities.

Scrubb dominated there — for two seasons. Twice, Scrubb averaged better than 20 points per game, increasing his three-point shooting percentage to 46.4 percent this season after making 40.3 percent from distance a year ago.

His performance was rewarded with the national junior college player of the year award. After committing to U of L last fall, Scrubb reconsidered and announced he intended to remain in the NBA Draft.

Jason Scrubb told me Jay left Louisville Tuesday for a location that he would not reveal to continue his draft prep, which had intensified when Scrubb trained with Maurice Urrutia after he returned home from school.

Father and son selected Corey Marcum of EZ Sports Group in Atlanta to represent Scrubb in the draft process.

When you tell him that his son is ranked No. 73 on the draft board at ESPN.com, he will tell you that Jay is No. 28 at NBADraft.net.

When you tell him his son is No. 85 (25 spots outside the second round) on Sam Vecenie’s big board at The Athletic, he will tell you Jay is No. 40 at Babcock Hoops, a respected draft website.

When you tell him, again, what the skeptical NBA scout said, he will leave you with this:

“People think we’re just out here doing things,” Scrubb said. “We have talked to so many people about the course of the last year. Period …

“Jay told me, ‘Daddy, I just want to focus on what my dream is.’ I had to respect that. He believes in himself one million percent. And I do, too.”