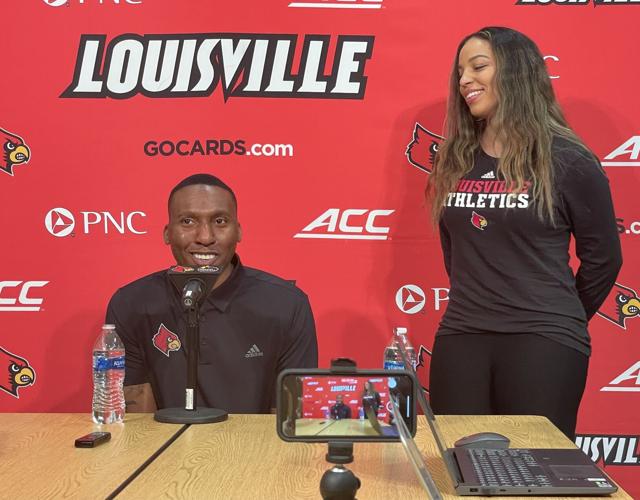 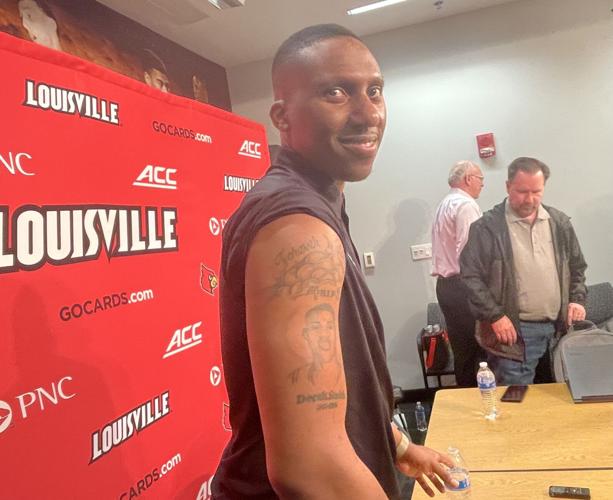 Nolan Smith has a tattoo of his father, Derek, on his right arm. WDRB Photo/Rick Bozich

LOUISVILLE, Ky. (WDRB) -- Derek Smith began his coaching career in 1994 with the Washington Bullets. He began the grind as an assistant in an unforgiving profession that relentlessly knocks most men down.

American University talked to Smith about working for its program. Others in the basketball world fixed their eyes on Smith, too. They recognized and respected Derek’s determination, curiosity and ability to solve problems.

But for Derek Smith, one job flashed atop his career achievement list: a coaching opportunity at his alma mater, the University of Louisville.

“That’s where Derek wanted to be,” said Smith’s widow, Monica. “Louisville was definitely at the very top of his list.”

On Monday morning, several hours before he was introduced as the first assistant on the staff Kenny Payne is assembling for the Louisville men’s basketball program, Nolan Smith and his wife, Cheyna, drove to Cave Hill Cemetery, where Derek Smith has been buried since August 1996.

Nolan needed a minute to tell his father that he achieved the goal Derek shared with close friends.

“I can’t even tell you how blessed and how much joy the Smith family feels today,” Monica Smith said about the opportunity presented to her son.

“I’ve always believed that Derek has used his hands to look out for us and put in these positions to keep our family safe and whole.”

There have not been many stories at U of L more inspiring than this one. Payne becomes the program’s first full-time Black men’s head basketball coach and hires the son of a Cardinal legend whose life goal was to coach at his alma mater.

“As I talked about in (his introductory) press conference, the criteria I was looking for, the whole time I knew it was him,” Payne said.

“Love of young people, high character, dedicated to craft, helping kids reach their dreams. All of that is him.

“And the big plus is that he's a family member. I know that someone's looking down on us today smiling. That's his father, who taught me everything I know and to have (Nolan) in this program. Derek's blood and spirit is back in Nolan.”

Family and love were two words that Payne and Nolan Smith used more than any other while sharing their vision about how they plan to return Cardinal basketball to the dynamic success of the 1980s when Derek Smith and Payne played for teams that won the 1980 and 1986 national titles.

Derek Smith made himself available to be Payne’s big brother after Payne committed to U of L in 1985. Smith grew up in Hogansville, Georgia, a town of less than 4,000 people in the west central part of the state. Payne arrived from Laurel, Mississippi, a comparative metropolis of 17,000 near the Alabama border, roughly 340 miles from Hogansville.

“Derek and Kenny had so much in common in how they grew up,” Monica said. “Kenny would come over to the house. They worked out together. Sometimes, when we went out, it would be the three of us. Kenny became family.”

That’s why there was never much doubt about the first coach Payne would recruit when he finally got his head coaching opportunity.

It would be Derek’s precocious son, Nolan, who Payne once held as an infant when Nolan was born in Louisville in 1988.

After Derek Smith’s tragic death from a heart attack while on a cruise when he was only 34, Payne, Jerry Eaves, Scooter McCray, Roger Burkman, Wade Houston and other former Cardinals from that era were available for Nolan, his sister, Sydney, and Monica. As Derek Smith mentored Payne, Payne mentored Nolan.

Nolan thrived -- and always strove to honor his father. who died when Nolan was 8. When Nolan decided to get a tattoo of his father on his right bicep, he said his mother's only request was, "it better look like my husband." It does.

Growing up in Maryland, Nolan played his way on to the 2007 McDonald’s all-American team with Derrick Rose and Eric Gordon. He started at point guard when Duke won the national championship in 2010. He worked his way into an assistant coaching position for Mike Krzyzewski at Duke, helping the Blue Devils assemble the nation’s No. 1 recruiting class this year.

But even at Duke, Smith always had Cardinal gear. He lived here until he was nearly 6, shooting baskets at Crawford Gym. If Derek was in the gym, so was Nolan -- and usually Payne.

Nolan said Payne sent him a text message not long after Smith watched Payne’s introductory press conference on his phone. Smith was riding a bus to a Duke NCAA Tournament practice in Greenville, South Carolina on March 18.

“Are you ready?” Payne asked.

“I will be,” Smith replied.

Smith is ready. The entire family is. Smith and his wife will settle in with their two young children. Monica said she planned to move back to Louisville, her hometown, by June. Expect Sydney to follow from North Carolina.

What would Derek Smith say about this day?

“He'd say, 'You're a chip off the old block,'" Nolan said. “That was one of his things. I know he'd be extremely proud of me.

“He always said he eventually wanted to be a coach back here at Louisville, so to be sitting here I'm living my life through him like I've always tried to do. It's very, very special and I'm so honored and proud to be here.

“It's really hard to explain the emotions I've felt since landing this morning. I've had chills walking through the airport … to have this Card (logo) on my chest means the world to me. To be a part of this is bigger than me.

“This program has always meant the world to me. To represent this great university, this program right alongside this guy (Payne) right here, I'm so excited to get to work.”

Smith has already gotten to work. While Payne worked multiple AAU tournaments in Indianapolis last weekend, Smith was in Orlando, trying to find players for the next three Louisville recruiting classes.

He said Coach K congratulated him on the move and called it a smart business decision. He said he will not give an inch to Duke or any other program in pursuit of future Cardinals.

And he said the Payne/Smith connection was the talk of the Nike EYBL AAU event.

“I felt a lot of fear of opposing schools,” Nolan Smith said.

“A lot of people, like Coach Payne said, were saying, ‘Congratulations and we’re happy for you. You and KP are going to kill it.’

“But then just walking past kids, you hear them go, ‘Louisville!’ There’s just something about it that when Kenny Payne was hired and then I was hired, it just felt a different feeling of this logo. This weekend, I really felt that.”

People around the Louisville basketball program are feeling it, too.