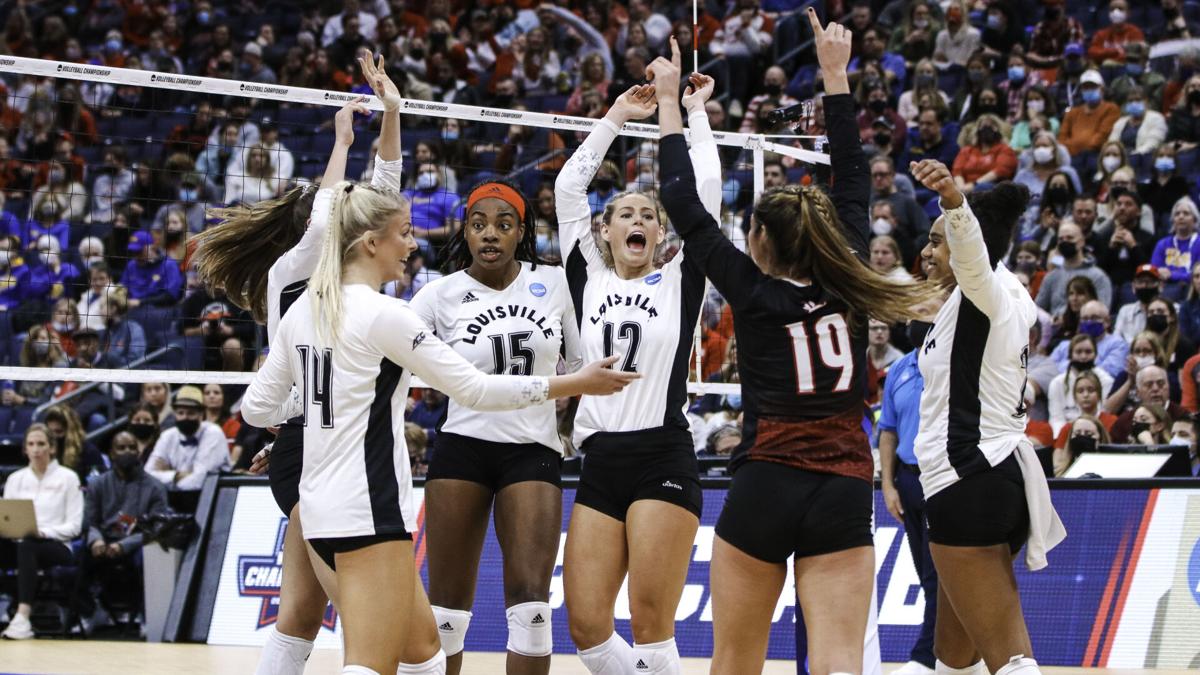 Louisville volleyball players celebrate a point in their Final Four loss to Wisconsin. 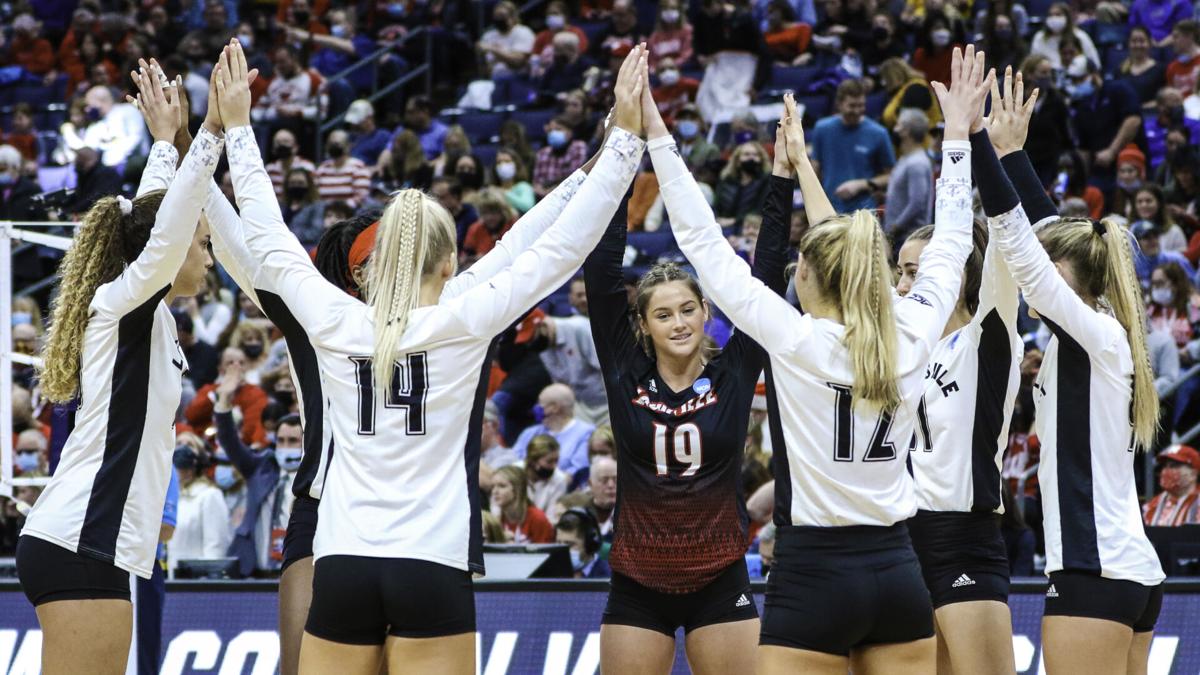 Louisville volleyball players celebrate a point in their Final Four loss to Wisconsin.

COLUMBUS, Ohio (WDRB) – For a team that had not lost a game all season, the University of Louisville volleyball team took even this, final crushing disappointment in stride.

After Wisconsin scored the winning point of its five-set victory over top-ranked Louisville in front of a Nationwide Arena crowd of 16,531, the Cardinals huddled on the court. They broke their huddle to reach across the net to Wisconsin's players. They they gathered back up, huddled for a last time, then headed toward their supporters' section to thank fans, and families, to share a few more hugs, and tears.

Wisconsin was big and aggressive. It played a defense as good as Louisville's, something the Cardinals had rarely seen during the season. And it featured one of the game's great payers, Dana Rettke, a 6-8 women's national team standout who is a 5-time All-American, but the player who perhaps hurt Louisville the most was a 6-9 freshman, Anna Smrek, a 6-9 freshman who rose to the occasion with 20 kills and a .704 hitting percentage.

After a few private moments with her team, Louisville coach Dani Busboom Kelly tried to express the dueling emotions of pride and disappointment.

"I'm really proud of this team and the way we battled tonight," she said. "And this is really a tough moment. This is just a team that you could be with forever. There's no burnout. There's nobody tired of each other. It's just one of those really special groups that you just can't -- you just never want it to end. So, it's hard to know that it's come to an end. We owe a lot to the seniors. We had an amazing senior class, and they're really the ones who got us here. But hats off to Wisconsin. They played really well in Game 5. And they really leaned on us. And I thought they broke us a little bit. So hopefully we can learn from that."

Images from Louisville's 5-set loss to Wisconsin in the Final Four.

The line between winning and losing is awfully fine. It's underscored when you're trying to write a game as it is being played, a story that's supposed to be filed immediately after the final point. On top, there's a story about a victory. There are celebratory photos. I've got to tell you folks, of the two I wrote Thursday night, that was the better story. It was the easier story to write, and seemed more natural. There were no shortage of joyous moments throughout the match to use to illustrate it.

In fact, that's all there were. There were no heads down. No angry exchanges. At no point did Louisville's body language or expression show discouragement.

But in the end, another story prevailed. Wisconsin scored the crucial points in the biggest moments and, in the fifth set, a handful of Louisville attack errors were the difference.

"I don't know if there's a lot that I would have done differently from, like, a game-plan or a tactical standpoint, Busboom Kelly said. "I thought we did a really good job. We held Dana Rettke to one of her lowest hitting percentages of the year, which is no easy task. We made a freshman step up. Sometimes you roll the dice and you think, hopefully this freshman doesn't have as amazing a game as they do. So I don't know if I would change anything. I wanted our team to be a little tougher down the stretch in game five and a little more aggressive. That's what we've been so great at all year. But we started tipping a little bit and making some uncharacteristic errors. And that wasn't us. But when it comes to this match, I don't think there's much I would change."

Wisconsin coach Kelly Sheffield said, " That was an epic volleyball match. The level of play by both teams and the heart by both teams was just special. We're really fortunate to come out on the winning side of that. It wasn't something that we showed more heart than our opponent or more will than our opponent. Those guys showed that as well. I thought Louisville, just what a -- we knew it was going to be like this going into this match. That was not a surprise. That is an unbelievable team that had an incredible, incredible season."

The end was jarring. Even so, graduate students Tori Dilfer and Anna Stevenson expressed an overriding emotion of gratitude for the experience that had just ended.

Both could have gone on with life after a COVID season. But both jumped at the rare opportunity for a do-over, and they both said it was one of the best decisions of their lives.

"I can't say much more other than this last year has changed me as a person, as a player," Dilfer said. "These people have changed me, I hope, all for the better. I hope I'm coming out as a much better person than I came in. Just having that extra year was an incredible blessing. Obviously COVID, no one expected it, nobody wanted it, nobody wants it. But I'm just grateful that that opportunity was extended to us. I can't imagine leaving here without this last year. I mean, last year, when our season ended, it was the easiest decision to come back because that loss sucked. This one sucks a lot more, but that one sucked. And I was ready to be part of something awesome. And I knew this team had it in them just because of the people that they are."

"I just feel incredibly honored to have been part of it," Stevenson said. "Just another year to be part of Louisville was just a blessing. I transferred here and I thought I'd only get two years with this team. And I am so happy it didn't end after two years and that I got a third."

There's not a great deal left to be said. If players can sit on a podium after a loss without great regrets, with gratitude for a season that just ended, outside of a national championship, what more can you ask for?

"I always hoped to coach a team that really understood what it took to be in this position and the hard work," Busboom Kelly said. "But more importantly, it's just been really amazing to see this team not only work hard but do it the right way and have fun and inspire a community and the university to love this program. I guess this team has taught me to stay true to myself and that we don't have to have -- like the role acceptance, like I was talking with my assistants a couple of days ago, just we are all very comfortable in our roles and that's really special. And that blends into the team. And I think that's something that's really tough and why we've been so successful. Yeah, this team has taught me that you really can have it all. You can be great and you can win a lot. You can have fun. You can love each other and you can build a program. And that's been pretty incredible to do that all in one year."

Dilfer, in the last words before Louisville left the stage, said, "I'll be grateful for the rest of my life for this opportunity. I can't really tell you much other than that. I'm just incredibly grateful. I'm really excited to see where this program goes."

Outside of winning it all, having it all is not a bad consolation.