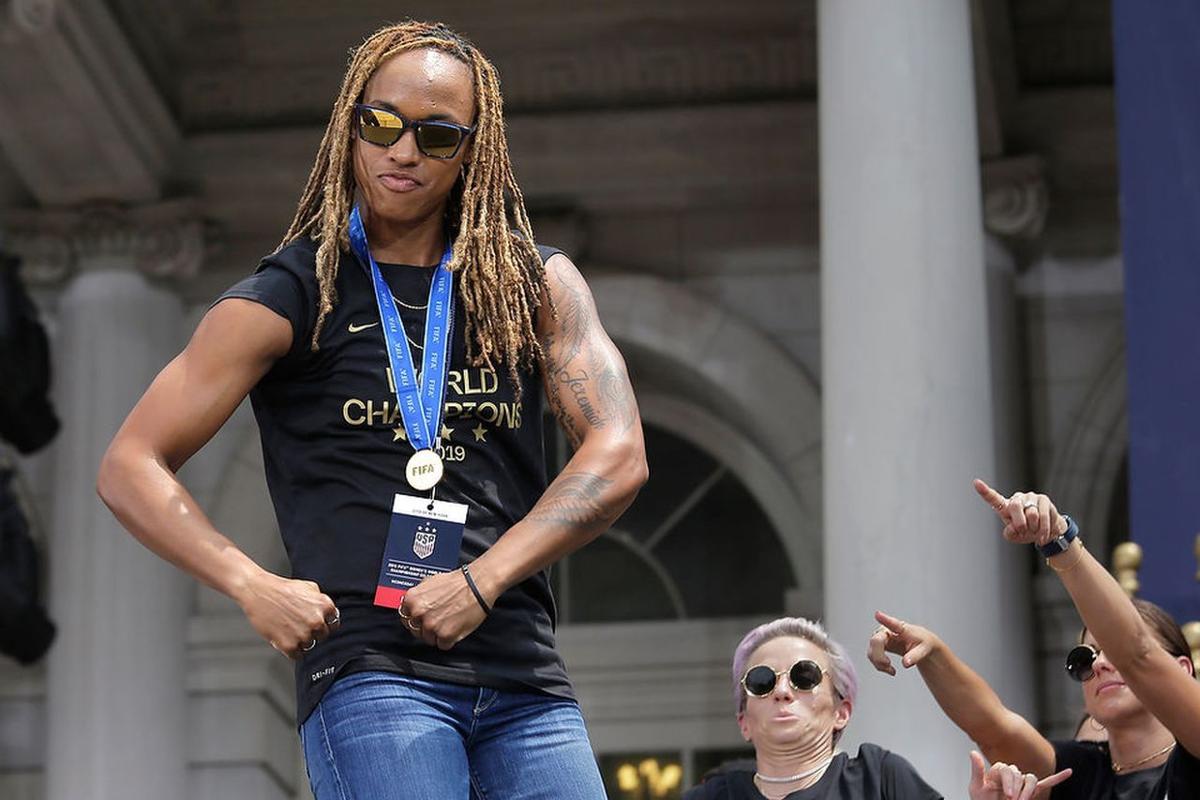 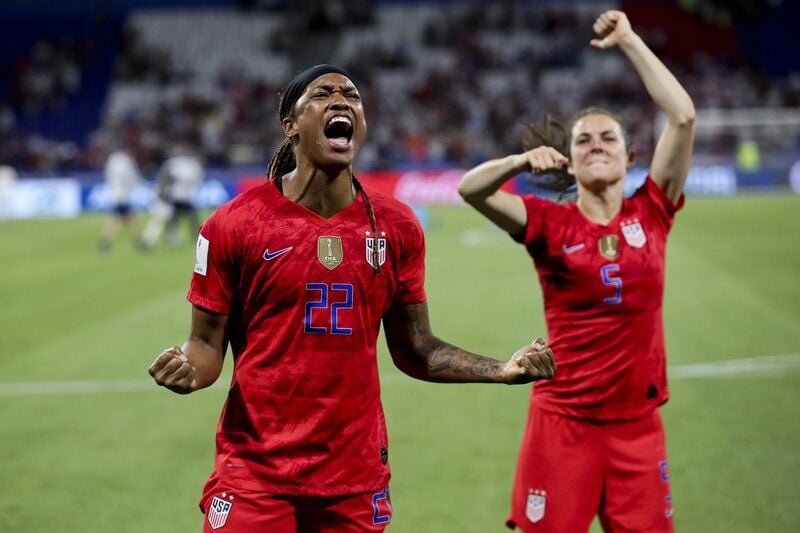 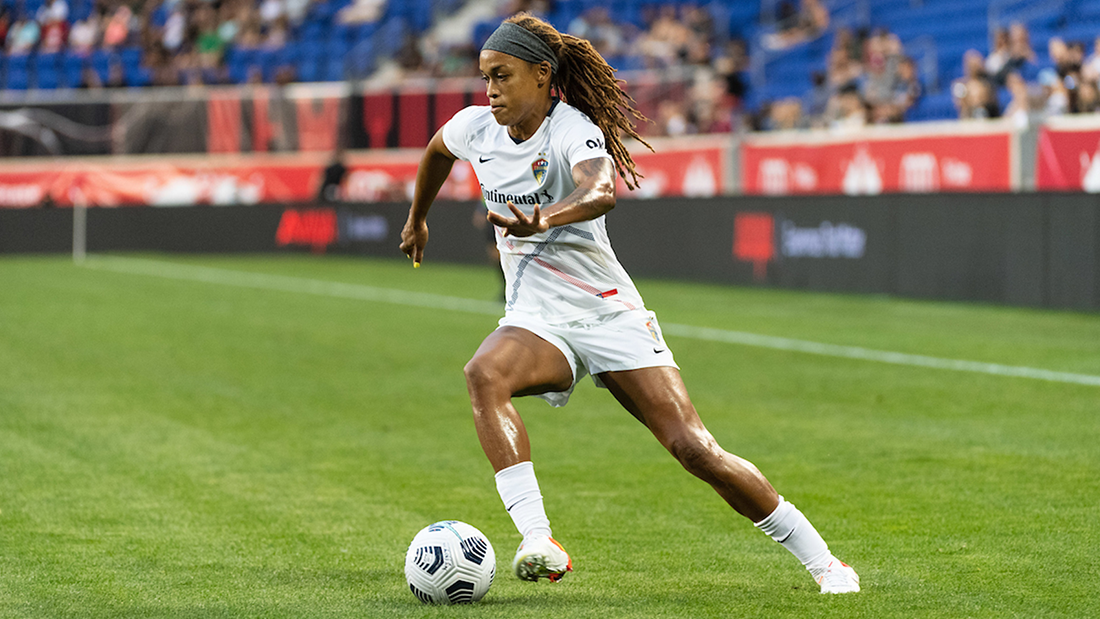 LOUISVILLE, Ky. (WDRB) – Jess McDonald's football resume is lengthy and speaks for itself. Member of the 2019 World Cup champions. Three-time NWSL champion, once the MVP of the championship game. Four goals for the U.S. Women's National Team in 19 appearances. A two-time NCAA champion at North Carolina.

The 33-year-old striker joins Racing Louisville FC as one of her sport's more visible American names, by virtue of her longevity and success in the NWSL, and her compelling life story, which earned a wider audience in the HBO Documentary Film, "LFG," about the struggle of the USWNT players to earn (at least) equal play to their male counterparts.

Hollywood, it would stand to reason, should be waiting eagerly for a treatment of her life story, a single mother, working multiple off-the-pitch jobs to take care of her son, all the while refusing to give up on her dream of playing soccer, both professionally and for her country.

She sorted boxes at Amazon and coached youth soccer while at the same time becoming one of the most prolific scorers in NWSL history and achieving her national team goals, all around her primary job as a mother, raising her son Jeremiah, who at age 9 will move to Louisville with her before the coming season.

Her face is the first on the screen in the HBO documentary, and with good reason. No athlete in the nation today can probably resonate with so many people, men or women, mothers or not, single or married, regardless of race.

And hers is the first story to take the screen in the HBO documentary. Her voice sets the scene. It opens on her working out in a makeshift home gym, and she speaks.

"It took true blood, sweat and tears, to, obviously, get where I am today," she says. "There were times I wanted to give up. I mean, here I am, 3-time pro champion, 2-time NCAA champion. I have achieved my dream. I wanted to make the USA Team, and I did. But even though all these accolades sound absolutely incredible, we don't get paid for it. I was scraping pennies for the last 7 years of my career, just trying to get by, literally living paycheck to paycheck. I had friends who were waitresses who were making three times as much as me in a year. And me being a professional athlete, I still to this day think it's unacceptable."

The film goes on to tell of the USWNT players suing the U.S. Soccer Federation for equal pay, and the journey that took them on.

For McDonald, however, the journey – and the challenge – has always been the same: How to become an elite soccer player, while being an exemplary mother. There were times she didn't feel exemplary. She would practice in her younger days with occasional glances at a stroller on the sidelines. Nobody else, it seemed, was doing it. But she had a dream.

It has taken lots of help. She lived with a family in North Carolina that helped make it possible. And she has done it through extraordinary discipline and drive. Since the World Cup win and the documentary, sponsorship opportunities have come. She is still working side jobs, but they're more lucrative, and have grown out of her struggles to succeed, like her role in helping to found a company called Soccer Resilience, which works with players, teams and clubs to develop a holistic approach to the sport.

I spoke with McDonald two days before Christmas via Zoom. Her son occasionally could be heard in the background. Just days before, in a surprise move, Racing Louisville announced that it had traded for McDonald.

In reality, however, it was McDonald who chose Louisville. She had visited the city during the regular season and said she got a good "vibe." She came here again for the NWSL championship game. She explored the facilities. She saw a bit of the city. As she looked for a change, it seemed a good fit.

"You know, I vibed really well when I was there," McDonald said. "I explored a little bit on my own. And I thought, 'It's just such a great place.' It wasn't, I'm not a city girl. So, it wasn't crowded the way you know, maybe when we traveled to LAFC, or even Houston, those bigger cities. I'm just like, I'm not a city girl. I'm all about quiet. I'm a homey kind of person. I've got my son, got my two dogs, so, you know, hardcore mom life. I just felt the vibe there. And so I mentioned Louisville to my agent and really didn't name any other teams in this league. And it was nice to see that they were also interested in me. So, I kept my options open, kind of juggled Courage and Louisville, and really boiled down to the decision to just go there and help try and change the organization. I know they're a new team and very young team. So why not have that little chip on my shoulder to bring my leadership presence?"

She comes to Louisville with 27 career NWSL assists, a league record, and ranks fourth with 51 career goals. In coverage of her trade, several outlets talked about "the next chapter," for McDonald.

While her next chapter surely will be promising, she's not ready to turn that page quite yet.

"Right now is soccer," she said. " I'm excited, because you know, there's going to be a be a lot of pressure, and I like pressure. That's what I love about this job, really, is the pressure that comes with it. And I don't think I could have put myself in a in a better position as a footballer and someone who brings experience. So that's the next chapter. That's what I'm just looking forward to, is soccer. And obviously, making sure my kid is also happy. You know, I want him to continue to have a great education. That's a priority to me. So, I'm looking at schools right now. It's really my kid's education and obviously, just doing the best I can career wise."

In Racing Louisville, she finds a franchise that not only values great players, but the great stories they have to tell. And few have a better one than McDonald.

She went from chasing her dream to being the embodiment of a dream realized, for single moms, for young girls of color in the sport, for all kinds of people. She has a powerful story, and she doesn't get tired of telling it.

"I absolutely love it," McDonald said. "Any kind of example that I can set for an individual the best way that I can, I'm going to do that. And telling my story, I know a lot more people relate to my story in comparison to a lot of my teammates'. One, being a mom, being a single mom, also, because there's a lot of us out there. It's just nice to have the platform that I do have to be able to speak about it, and know that it's OK, it's normal, you know? Obviously, we do the best that we can as parents. It's just really inspiring for me, just being a mom and just trying to chuck it along, you know, on my own, with help from others. I wouldn't be here today without the help that I've gotten throughout my journey."

At this point, her son can be heard chuckling in the background, and McDonald smiles.

"Sorry, my kid's cracking up in background," she said, then continued, "But just being able to set a good example for my kid, too. And hopefully that's an example that I can also set for parents, because I go in every day at training and every game, I'm also working very hard for my son, not just for my team, not just for myself, but for my kid, too. I have to do the best that I can day-in and day-out. . . . It really inspires me every day to set a good example for the little kids who obviously want to be in my shoes one day, and even him. I want to inspire him also, and all the parents globally, who just recognize that these things are normal, from the struggle to the success. Without struggle, there is there is no success. I'm just really a walking testimony of that."

McDonald has already reached out to some teammates. She connected with the North Carolina Tar Heels on the roster. She says she's good friends with Addisyn Merrick, and even reached out to Nealy Martin to see if she could perhaps get her No. 14 from her. Martin told McDonald that she'd happily find another number.

As for training, with each passing year, McDonald said her methods adapt, and she becomes more and more a student of the game, watching the best players in the world at her position, watching games all over the world to pick up new ways of operating in front of the goal.

She also said that every offseason, she trains, in a different sport from soccer. Her chosen sport this offseason — boxing.

So don't be surprised soon if you see her around town, jabbing at the wind. She wouldn't be the first big-time athlete to do that here, in the hometown of "The Greatest."

And she will join a Racing Louisville team that is fast acquiring the ability to inspire its city, whether on the pitch, or off.