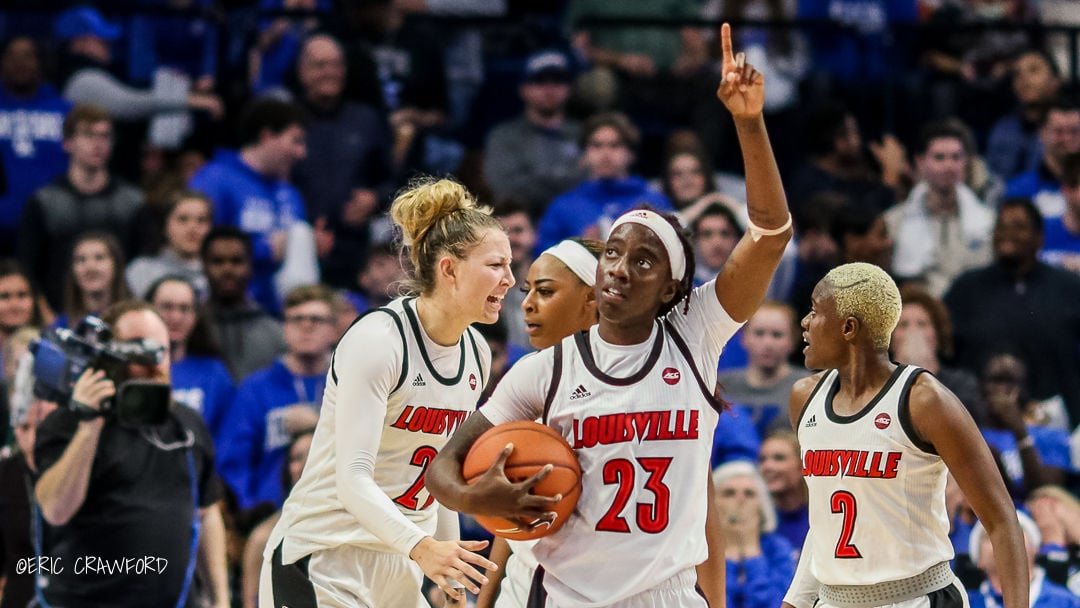 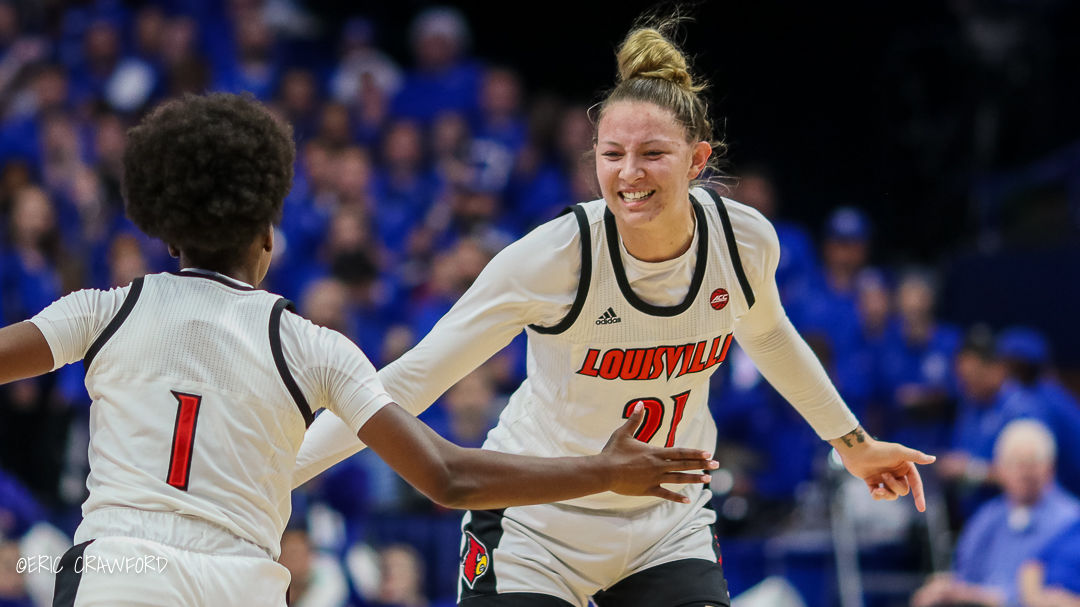 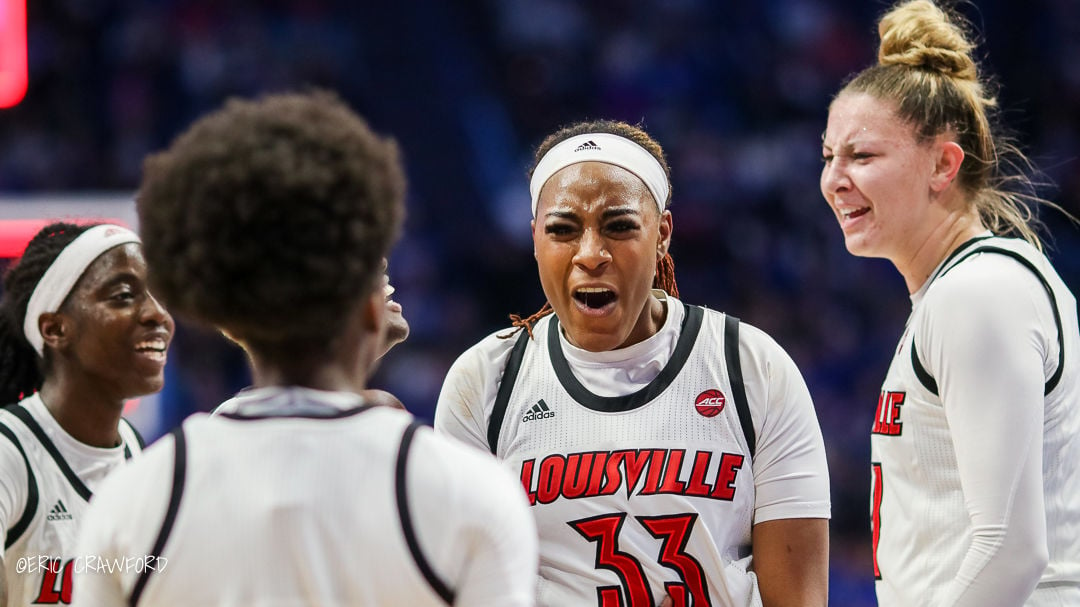 Louisville senior Bionca Dunham is fired up after a second-half basket. 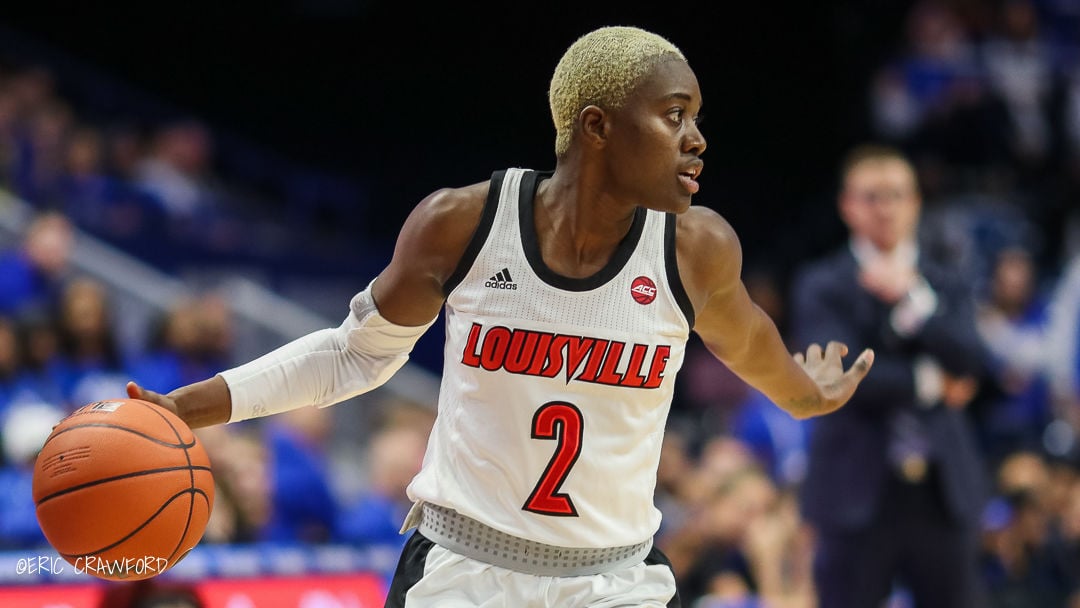 Louisville senior Yacine Diop had eight big second-half points and did the defensive job against Kentucky's leading scorer Rhyne Howard in the second half of the Cardinals' win in Lexington.

Louisville senior Bionca Dunham is fired up after a second-half basket.

Louisville senior Yacine Diop had eight big second-half points and did the defensive job against Kentucky's leading scorer Rhyne Howard in the second half of the Cardinals' win in Lexington.

LEXINGTON, Ky. (WDRB) – Having the best player goes a long way toward winning the women's basketball rivalry game between Louisville and Kentucky. On Sunday, it came up just short.

No. 7-ranked Louisville had too many weapons and too much rebounding, and, when No. 14 Kentucky All-American Rhyne Howard's 3-point try at the buzzer bounced off, the Cardinals also had their fourth straight win in the series — 67-66 before a Rupp Arena crowd of 11,256.

"Rhyne Howard was the best player on the court today," Louisville coach Jeff Walz said. "There's no question about it. The past few years, we've had the best player on the floor in Asia Durr. But what we've got right now are six to eight players who can get between 15 to 25 points any night. And now, it's just a matter of us becoming more consistent in making that happen."

Walz had a long list of players to praise Sunday. Louisville got 18 points and 10 assists in a brilliant game from junior point guard Dana Evans, who matched her career-best assist total from a victory at UK two years ago. Kylee Shook was big for the Cardinals. She hit a trio of 3-pointers in the second half after U of L fell behind by 10 in the third quarter. She finished with 11 points and also had 13 rebounds. She outrebounded UK in the second half all by herself — nine rebounds to the Wildcats' seven — and had five blocks in the game.

"Early this season, I thought Kylee was trying to build a three-story house with her 3-point shooting," Walz said, in a not-so-subtle reference to bricks. "But I was really pleased with her today. She was really good all around. Really strong on the boars and on defense."

Rebounding has been a problem for Kentucky all season, and it was again Sunday. Louisville outrebounded Kentucky 37-17. Of the Cardinals' 27 missed shots in the game, UK rebounded only 10 of them; the Wildcats had only four defensive rebounds of Louisville's 14 second-half misses.

How did Kentucky nearly win anyway? The Wildcats were outstanding from 3-point range, outscoring Louisville 30-15 while going 10 for 19 from beyond the arc. And Kentucky went 12 for 15 from the free-throw line, while Louisville shot only four free throws.

Kentucky went a stretch of 17:45 in game time – the entire second quarter and most of the third – without being called for a single foul. When the Wildcats finally picked up a whistle late in the third quarter, Walz looked as if he wouldn't have been surprised to see former Kentucky Gov. Matt Bevin issue a pardon.

Louisville led 21-16 after one quarter, but Kentucky outscored the Cardinals by 14 points in the second behind 15 points in the period from Howard.

In the third quarter, Walz made a key move: substituting graduate transfer Yacine Diop for sophomore transfer Elizabeth Balogun. The more experienced and more physical Diop went to work defensively on Howard and held her to 8 points on 2-for-8 shooting in the half, while scoring 8 big points of her own.

"I was really happy for Yacine," Walz said. "She came in and showed her experience. She has a great motor."

Louisville also got a big game from Bionca Dunham, who finished with 10 points on 5-of-5 shooting and had a pair of offensive rebounds down the stretch. Jazmine Jones added 10 points and five rebounds and had what Walz said might've been the play of the game when she chased down a long rebound and saved it from going out of bounds when Kentucky was trying to come back a bit in the fourth quarter.

Kentucky coach Matthew Mitchell praised Evans and said he knew Louisville's rebounding would be a problem.

"Dana is a really good player," he said. "I thought we did a good job on her 3-point shooting. But we weren't ready for Shook to do what she did."

"I was proud of her, because she didn't hit the 3 as well as she has but she got to the rim and pulled up on some," Walz said. "And she had a couple of dump passes to our posts that she couldn't have made as a freshman … When you can do that and you're not one dimensional, then you're looking at somebody who is dangerous."

Louisville returns to action Thursday night at Tennessee Martin. Kentucky is off for finals, returning to action Saturday at California.