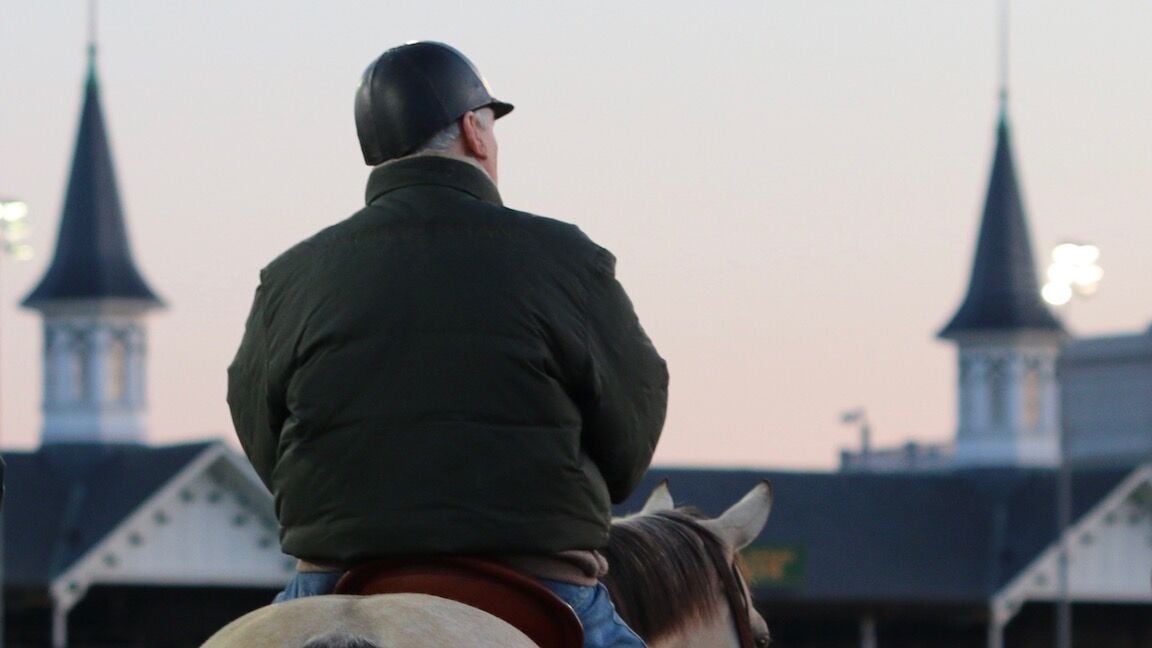 Hall of Fame trainer and 4-time winner of the Kentucky Derby D. Wayne Lukas is framed by the Twin Spires at Churchill Downs.

Hall of Fame trainer and 4-time winner of the Kentucky Derby D. Wayne Lukas is framed by the Twin Spires at Churchill Downs.

LOUISVILLE, Ky. (WDRB) -- Hall of Fame trainer D. Wayne Lukas is back at his barn, back on the track and back where he should be on the first Saturday in May. The four-time winner of the Kentucky Derby doesn’t have a horse in the race this year, but he’s already won.

He contracted COVID-19 early this month, then beat it. But it wasn’t easy, and for a man who will turn 85 this week, the recovery is something to be thankful for. He completed his isolation and tested negative to get back into training activities at Churchill.

Lukas said he lost consciousness on two occasions with the virus, and told The Blood Horse magazine, “it scared the hell out of me.”

“I drifted in and out,” he said. “You don’t get your air, and it’s the strangest feeling. In my case, I couldn’t get any air, and felt like I was drifting away, and then I’d come back. You just want one breath of air. I can see where those people on ventilators are thankful they’ve got them.”

Lukas did not require a ventilator. But he did say he came back slowly. He’s a little leaner, having lost 20 pounds through the experience. But he’s back on his pony and on the track during this most unusual Derby week.

“I’ll say this to the general public: Don’t underestimate it,” Lukas told pool reporters at Churchill Downs. “It affects everybody differently, but it affected me very strongly. I got really sick. And, you know, I didn’t even put much emphasis on anything until it happened. But when I got sick, it happened very rapidly.”

Lukas said he doesn’t know where he contracted the virus.

“I really, really stayed to the protocols completely,” he said. “I haven’t eaten in a restaurant in 40 or 50 days. I social distanced as I should. I was on my saddle horse all morning, so I didn’t interact with anybody.”

Aside from severe shortness of breath, Lukas said he didn’t have any aches or pains. He did lose his sense of taste briefly. His wife, Laurie, who tended to him, has not gotten sick and has tested negative twice.

When he initially went to the hospital, he said doctors checked his heart and told him to go home, that he didn’t have COVID. About 6 o’clock that evening, they called to tell him he had tested positive.

“I could have told them that,” he said. “We rode it out. I feel better now than I did even a month ago. But I would say this, you have a tendency to get complacent about it, wandering around, just like we are today, you take it for granted, but it does affect you. It’s an eye-opener ... I got really weak. Really weak.”

Now Lukas is back at Churchill, where he’s training a filly Crystal Lake, in Wednesday’s Unbridled Sidney Stakes at Churchill Downs, hoping to to move her forward a bit against tougher competition.

After the month he’s had, that Lukas is at the track at all is remarkable. And he’s grateful, though it didn’t take COVID-19 to make him feel lucky.

Lukas said he thinks Churchill did the right thing in deciding to run this week’s Kentucky Derby without fans but notes it’s a dramatically different feeling around the track.

“I just think people should not get complacent,” he said. “I’d wear my mask. I wouldn’t tempt fate. I wouldn’t give it a chance, in any way, shape or form. I see people taking it lightly, and I think that’s a mistake, whether you’re my age or are 18 or 20.”

Copyright 2020 WDRB Media. All Rights Reserved. Quotes from D. Wayne Lukas were provided via pool arrangement on the Churchill Downs backside via the National Turf Writers and Broadcasters association.

As teacher vaccinations begin, Hardin County Schools wait to learn when educators can get in line