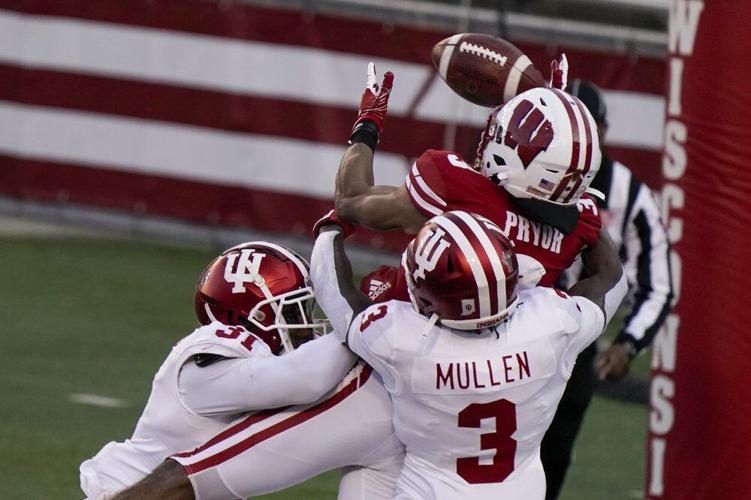 Indiana defensive back Tiawan Mullen (3)and defensive back Bryant Fitzgerald (31) break up a pass intended for Wisconsin's Kendric Pryor during the first half of an NCAA college football game Saturday, Dec. 5, 2020, in Madison, Wis. (AP Photo/Morry Gash) 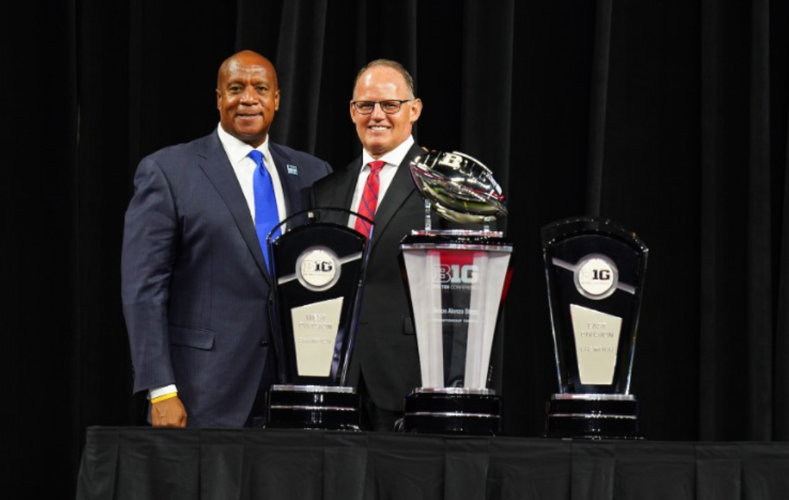 The Hoosiers stumbled terribly against Iowa in Week 1 and never sniffed the Top 25 the rest of the season. The good times lasted less than 2 1/2 minutes, which was all Iowa needed to jump on Tom Allen's team, 14-0. Indiana failed to score a touchdown. It was the story of the 2021 season.

The Hoosiers finished with eight consecutive defeats. Their 2-10 record featured five losses to top-20 teams, including a pair to teams that made the college football playoff (Cincinnati and Michigan).

Allen has famously locked down nearly every minute of IU scrimmages since last spring to hide any looks at Walt Bell's offense. He has also declined to name which quarterback will start at 8 p.m. Friday for the Hoosiers in their season opener against Illinois (1-0) at Memorial Stadium in Bloomington.

Put me down for Connor Bazelak, the transfer from Missouri. Bazelak has 23 career touchdown passes. The other four quarterbacks on IU's roster have combined for five in their careers.

The Question: Will the Hoosiers be the Indiana of 2019 and 2020 or the team that went winless in the Big Ten last season?

IU's impotence last season was stunning. The Hoosiers were out-gained by nearly 100 yards per game and outscored by an average of 16 points. They managed only four touchdown passes in nine Big Ten games and rushed for less than 85 yards in five league games.

No wonder the world has forgotten that IU finished 6-2 in 2020, defeating Wisconsin, Michigan and Penn State, and went 8-5 in 2019, with victories over Nebraska, Northwestern and Purdue.

The Answer: The Hoosiers cannot be as inept as they were last season. Bell arrives to run the offense. He failed as a head coach at Massachusetts, but that is one of the worst jobs in America. Bell built his resume as an offensive coordinator at Maryland and Florida State. IU is supposed to play faster and throw more short passes.

After forcing 20 turnovers in nine games in 2020, IU forced only nine in a dozen games last season. Allen will return to his roots by helping new coordinator Chad Wilt (a recruit from Minnesota) coach more aggressiveness into the defense.

Indiana hit the transfer portal hard, especially players departing the Southeastern Conference and North Carolina. These are the guys who should be instant contributors:

The Dependables: Receiver D.J. Matthews showed the ability to deliver major yards after the catch before a knee injury stopped him. Offensive tackle Luke Haggard earned high grades at ProFootballFocus. Linebacker Cam Jones is a team leader who organized a players' group to change the vibe around the program on the Sunday after the 2021 season ended. And cornerbacks Tiawan Mullen and Jaylin Williams, if healthy, are the best DB tandem the Hoosiers have had in years.

The Rising Star: At 6 feet, 6 inches tall and 252 pounds, A.J. Barner is a full-sized tight end with the speed and athleticism to get open. Bell has been comfortable using his tight ends as weapons at past stops and Barner seems primed to deliver a big season — if IU has a quarterback who is protected and can deliver accurate throws. Big IF.

The Tidbits: Shivers is a former four-star recruit who left Auburn for IU because his playing time was limited on The Plains. Only 5-feet-7-inches tall, Shivers averaged 5.2 yards per carry while scoring eight touchdowns over four seasons with the Tigers. Bazelak was voted SEC offensive freshman of the year in 2020 while leading Missouri to wins over LSU, Kentucky, South Carolina, Vanderbilt and Arkansas. Allen signed the fifth-highest ranked recruiting class in the Big Ten and No. 30 in the nation last December. Look for defensive end Dasan McCullough, receiver Omar Cooper and defensive lineman Nick James to contribute early.

The Schedule: It's impossible to overstate how important the season opener is for the Hoosiers. Although Illinois thumped Wyoming, 38-6, in its first game Saturday, the Illini are only in their second season with coach Bret Bielama and they are not expected to be one of the top teams in the Big Ten West.

Following that, IU has home games with Idaho (coached by Paul Petrino) and Western Kentucky before they play their first road game at Cincinnati on Sept. 24. After visiting Nebraska, IU closes its season with seven consecutive games against programs that went to bowl games last seasons. Ohio State, Michigan and Michigan State are ranked in the top 15.

The Predictions: The consensus pick from the WDRB sports staff for the Hoosiers is improvement but another losing season, this time 5-7.