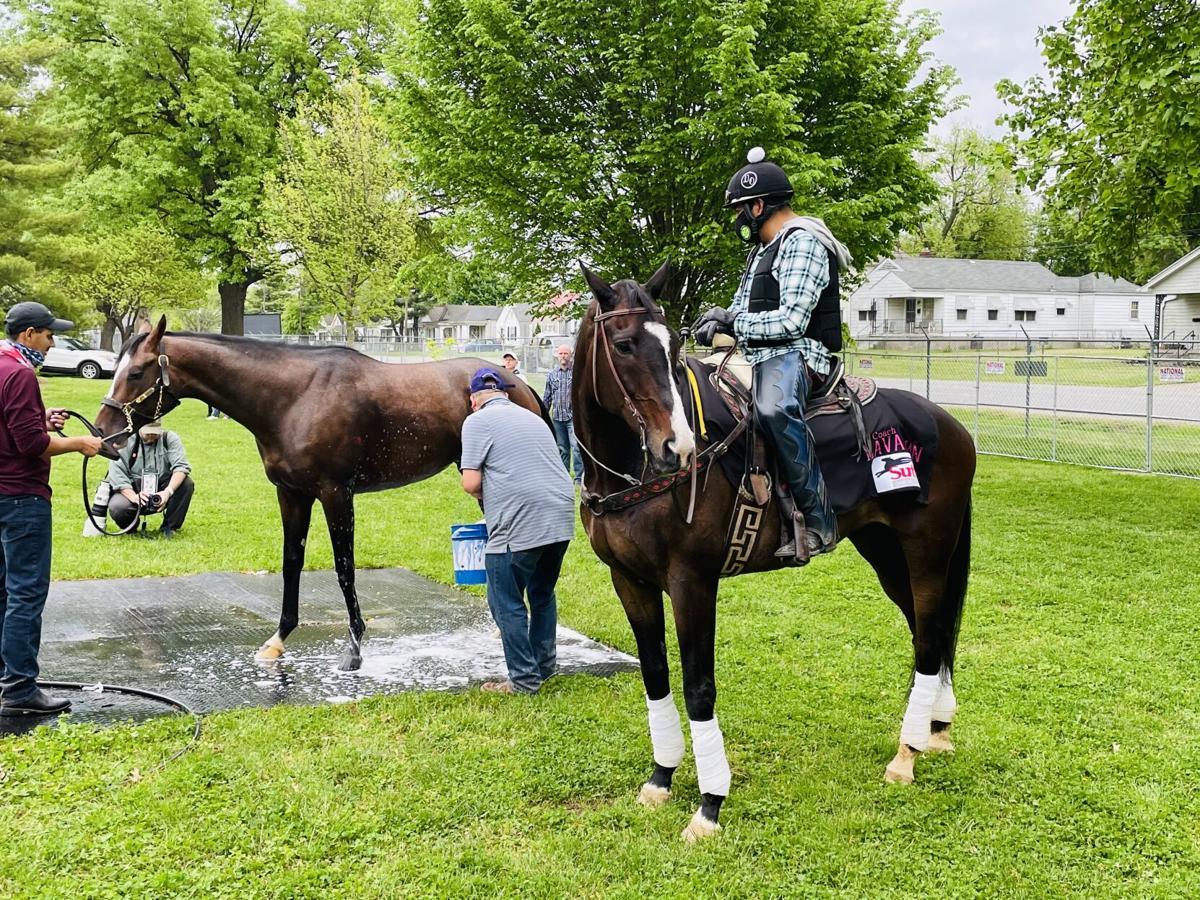 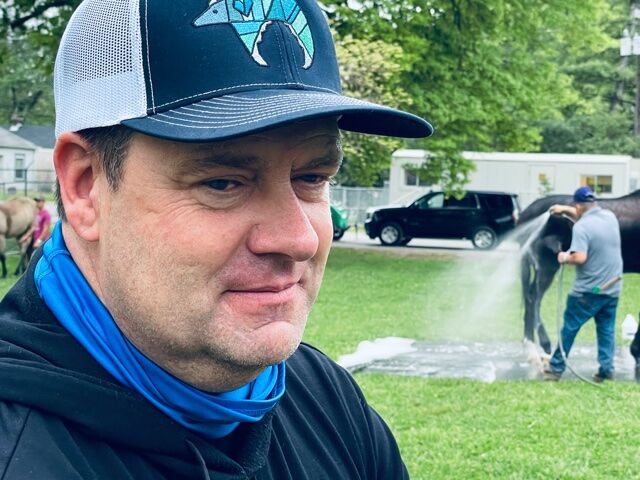 Turn the camera to the five former Ivy League football players who will bring an armada of their Brown University fraternity brothers with them to Churchill Downs this weekend.

Keep rolling on the shed row. Most Kentucky Derby horses have one trainer. This contender has two.

One is Doug O’Neill, the trainer with two Derby wins since 2012. The other is Lava Man, the former $50,000 claimer who won more than $5.2 million in purses in his unlikely Hall of Fame career.

Lava Man is 20. That is roughly 60 in human years. But Lava Man had zero interest in retired life on the farm. He is parked in the stall next to Hot Rod Charlie, leading him to the track every morning.

On Wednesday, Lava Man led Hot Rod Charlie to the starting gate in a schooling session for Saturday’s race.

“He was really good there, standing calmly outside the gate,” O’Neill said. “That’s why we call him, ‘Coach.’"

There is so much going on that sometimes you forget the reason this crew gathered at Barn 41 — Hot Rod Charlie, winner of the Louisiana Derby and the fourth choice in the Derby morning line at 8-1.

Greg Helm, 73, worked with Jobs on multiple Apple advertising projects, including what's considered one of the 10 best commercials in TV history. His syndicate, Roadrunner Racing, owns 50% of Hot Rod Charlie.

Standing outside Barn 41 on Wednesday, I asked him how he’d pitch this story to Jobs.

“That’s easy,” Helm said. “I’d work the Alpha and Omega angle. You’ve got the guys coming up in their careers and the guys retiring. It has everything.”

It has everything except the Derby Trophy — for now. If Hot Rod Charlie scores Saturday, be prepared for a celebration unlike any other.

There is Roadrunner Racing, a group of half-dozen retired country club members and their wives from Palm Springs, California.

The dining room at La Quinta Country Club added the Hot Rod Charlie sandwich, a fried chicken offering with peppers and hot sauce that will remain on the menu through a Derby party Saturday.

Roadrunner has never been a big hitter in the sales ring. They’re people who enjoy horses and a good time. They dabbled only in claiming horses or 2-year-olds in training until October 2019. That’s when O’Neill’s brother Dennis, a bloodstock agent, asked Helm if the syndicate would be interested in a yearling he purchased for $110,000 at the Fasig-Tipton Sales Lexington.

“That was a little out of our comfort zone,” Helm said.

“Turned out to be a bargain,” he said.

Hot Rod Charlie is what my mother called me when she was convinced I was driving too far above the speed limit. This colt was named Hot Rod Charlie because of the bloodlines connection with Mitole, a champion sprinter, and because his dam was sired by Indian Charlie.

But, remember, Roadrunner wanted half ownership. They’ll need a wide-angle lens for the Winners’ Circle photo if Hot Rod Charlie wins the Derby because the other 50% was divided in half.

Bill Strauss, a co-founder of ProFlowers.com, took 25%. The other 25% was purchased by a group of five former Brown University football players that included Patrick O’Neill, the trainer’s nephew.

Their syndicate is named Boat Racing LLC for a drinking game they played in college. Considering they have invited a group of their fraternity brothers to Louisville this weekend, you’re likely to hear them before you see them at Churchill Downs.

By the weekend, O’Neill expects the entourage to swell to nearly 150 people.

“They’re quite a group,” O’Neill said. “They’ll be good for business here in town.”

Don’t forget “The Coach.” Lava Man is a critical character of this story.

Hot Rod Charlie needed four starts before he broke his maiden at Santa Anita last October. A month later, O’Neill entered him in the Breeders’ Cup Juvenile at Keeneland in Lexington. At 94-1, Hot Rod Charlie was the largest price in the 14-horse field. He finished second, only three-quarters of a length behind Essential Quality.

Lava Man, who retired in 2010 after winning 17 of his 47 career starts, has been with him every step of the journey — from Lexington back to Los Angeles for a race at Santa Anita to New Orleans for the stirring 2-length Louisiana Derby win and now to Louisville.

Hot Rod Charlie earned a 99 Beyer Speed figure in that race, one of the best performances by any 3-year-old this spring.

“He’s so personable and so quiet in the stall,” O’Neill said. “And he’s got high energy on the track. That’s just a perfect combination for a good race horse.”

Those are the same qualities Lava Man flashed. Maybe there is something to this coaching role. Every morning at Churchill Downs, Lava Man leads Hot Rod Charlie to the track. On Wednesday, before the horses went to the starting gate, Lava Man, rocked in his barn, eager to get to work.

This is Lava Man’s second trip to Churchill Downs. His first was 2012. Lava Man was the stable pony when O’Neill won his first Kentucky Derby with I’ll Have Another.