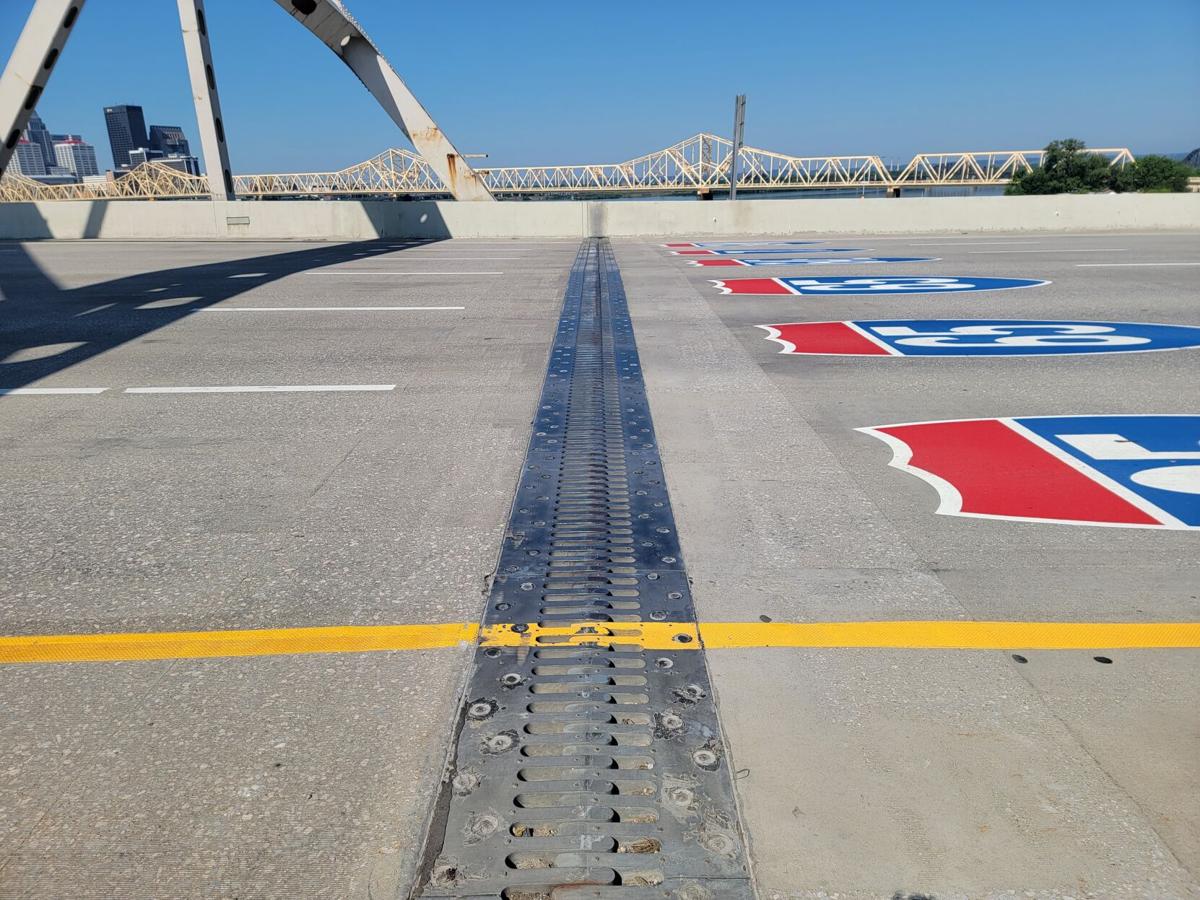 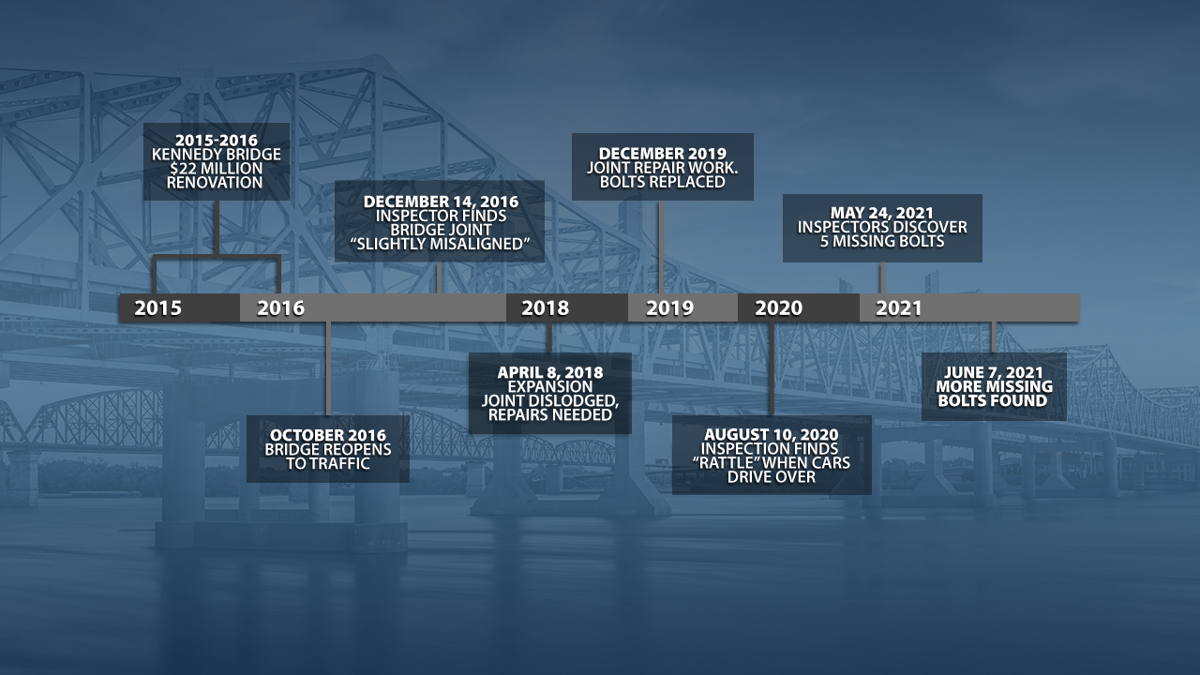 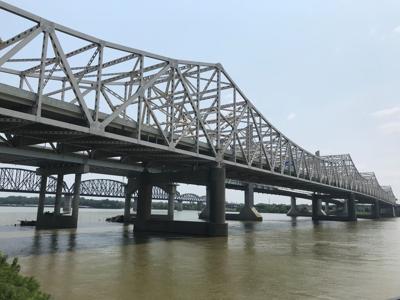 LOUISVILLE, Ky. (WDRB) – After getting complaints about noise on the Kennedy Bridge, a Kentucky Transportation Cabinet inspector visited the span in May and noticed an “audible rattle” and part of the roadway bouncing with traffic.

A week later, other inspectors discovered five missing bolts where drivers pass over a strip resembling interlocking fingers near the Indiana state line. It’s one of four joints that connect the bridge deck’s concrete slabs, letting the structure expand and contract.

Two weeks later, on June 7, a special review found one more bolt missing in the same area and two other bolts that could be removed by hand. Another two bolts were sheared off.

Those details, included in inspection reports obtained under Kentucky’s open records law, shed more light on the condition of the 57-year-old Ohio River interstate crossing before state officials closed three lanes indefinitely last month while they wait for new bolts to be made and installed.

But the reports also show there were “errors in construction” at the expansion joint that the Kentucky Transportation Cabinet knew about shortly after the span was refurbished. In fact, just two months after Kentucky finished a $22 million overhaul of the Kennedy Bridge deck in 2016, an inspector discovered the joint was misaligned and moving when trucks passed over it.  The source of a “banging sound” at the joint wasn’t located.

Despite repeated issues with the bridge’s joints, inspectors have rated the Kennedy’s deck in “good” condition since 2017. And although the lanes remain closed to avoid possible damage from vehicles crossing the malfunctioning joint, the Transportation Cabinet says the bridge’s structural integrity isn’t at risk.

Still, the scheduled repairs and previous work to the bridge joints raise new questions about the effectiveness of the much-celebrated 2016 overhaul, particularly since traffic on the span is about half of what it was before then.

Among them: Why didn’t Kentucky state government know sooner about air pockets beneath the joints that the Transportation Cabinet says have contributed to bolts coming loose or breaking? Why wasn’t any action taken to fix the misalignment as soon as it was discovered in late 2016?

The Transportation Cabinet declined an interview for this story. But in written responses to questions, it said the air pockets, or voids, developed when the concrete deck was poured. They were not “visible or detectable” through metal decking where the concrete was added, the statement said.

Those voids have contributed to the joint's multiple broken or missing bolts, according to the state. “It does NOT appear that all the joints have voids,” it said.

Walsh Construction completed the work on the Kennedy Bridge and other downtown parts of the Ohio River Bridges Project under an $860 million contract with Kentucky in late 2016. The Transportation Cabinet says there was no warranty for the Kennedy or Lincoln bridges.

Meanwhile, the cabinet’s response said the misaligned finger joint “wasn’t alarming” and didn’t necessarily indicate any problems with the bolts in the assembly. The issue could have been caused by temperature changes or how the frame underneath was placed, it said.

The renovation work five years ago was part of the $2.3 billion bridges project, which added a new I-65 Lincoln Bridge alongside the Kennedy and the upriver Lewis and Clark Bridge between Prospect, Ky., and Utica, Ind., in addition to a new interchange near downtown Louisville. Those three crossings became part of the RiverLink toll network.

In announcing that “in-depth renovation” in early 2015, then-Gov. Steve Beshear pledged a “more complete and long-lasting overhaul” of the span. A Transportation Cabinet press release said the work would eliminate the need for “major repairs and traffic disruptions on the Kennedy Bridge for decades.”

There is no timeline for the repairs to the damaged joint, since those depend on “custom bolts” that haven’t yet been manufactured or delivered. Asked how the state plans to ensure the new bolts won’t come loose, it said: “The next repair will include a type of bolt that goes through the entire thickness of the deck, with a nut on the underside of the deck, as opposed to being anchored within the deck.”

The work will be the latest needed to the expansion joints on the Kennedy in the years after the new bridge parts were added.

In April 2018, crews made temporary repairs after a joint was dislodged. The joint is farther south that the one with the recently discovered missing bolts.

In August of that year an inspector visited the bridge for another evaluation, writing: “The finger joints have had multiple issues due to errors in construction, such as inadequately tightened anchor bolts and voids under the finger joints.”

The inspector observed that the finger joint that failed earlier that year had a roughly five-foot “section of broken fingers that have been covered with an asphalt patch. This joint is extremely loud under heavy truck loading.”

Also noted were “construction misalignments” and “exposed shear studs” that could be seen from beneath the finger joints.

Then, in November 2018, transportation officials conducted a special inspection to “closely examine” all four of the bridge’s finger joints. That led to a sweeping $788,100 project about a year later, in December 2019, that included removing and replacing bolts in all joints and making other repairs, according to construction documents.

By August 2020, some eight months after the repair project, an inspector deemed the joints to be in “satisfactory” condition. But he found that a section of the finger joint near the Indiana border – again, the one now set for repairs -- was loose, causing an “audible rattle.”

That joint is not far from the Harbours Condominiums in Jeffersonville, Ind. From his 10th-floor condo, Russell Johnson can see the bridge and hear its traffic.

Johnson, the condo association’s board president, has lived at the Harbours since 2012. After the renovations to the Kennedy Bridge in 2016, he said the noise was slightly louder than before – an increase he attributes to faster speeds.

Then, he said, it got "really bad" about three or four months ago.

"It was making enough noise that if you live on this side of the building, you could not sleep," he said. "It really only happened when a heavy load came across, and then it would just hammer the bridge."

Condo residents then contacted the Kentucky Transportation Cabinet. In one email provided to WDRB News, Johnson’s wife, Sandi, wrote that the bridge noise was "new and different."

She received an email back, saying her concern was being forwarded to the supervisor overseeing 1,345 structures in eight counties.

"The bridge itself is structurally sound," the email said. "KYTC’s bridge inspector will assess the joints to ensure they are working properly."