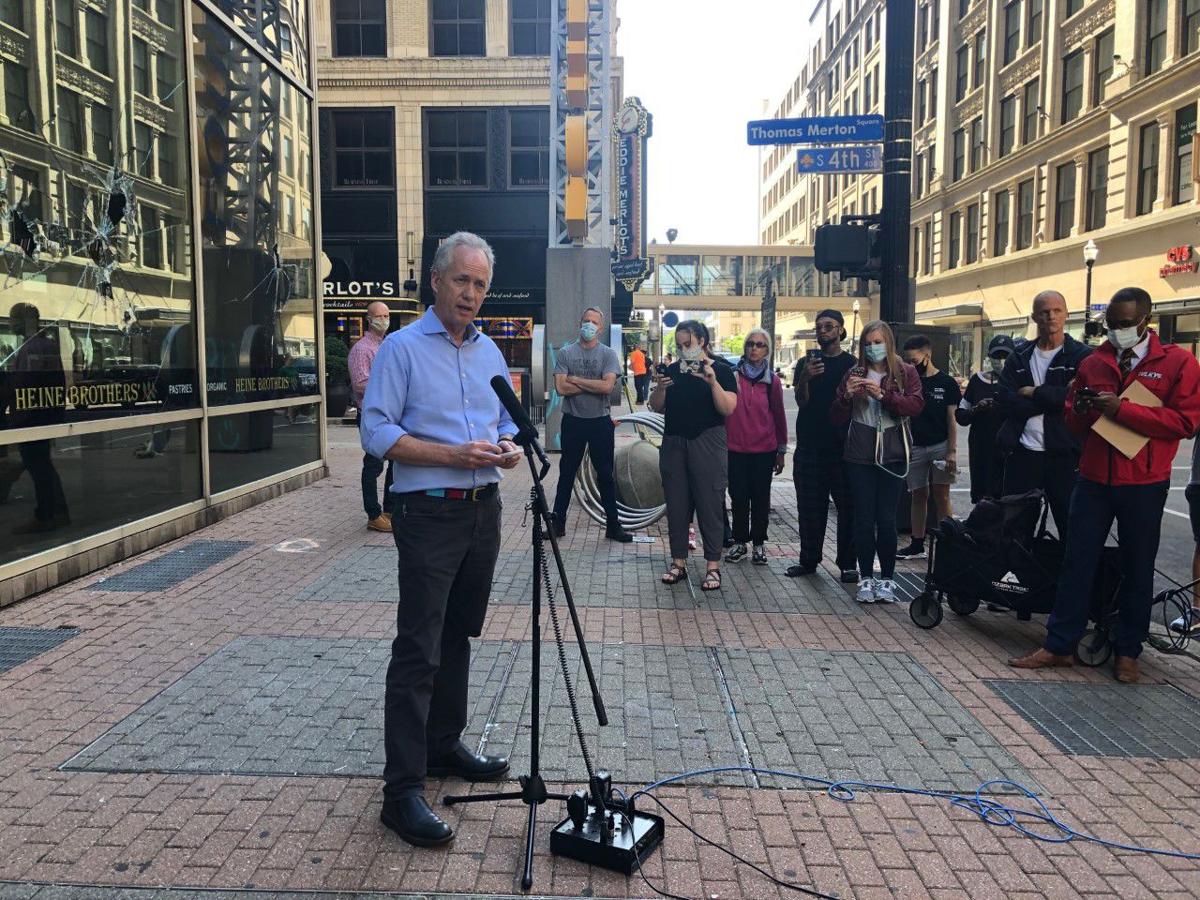 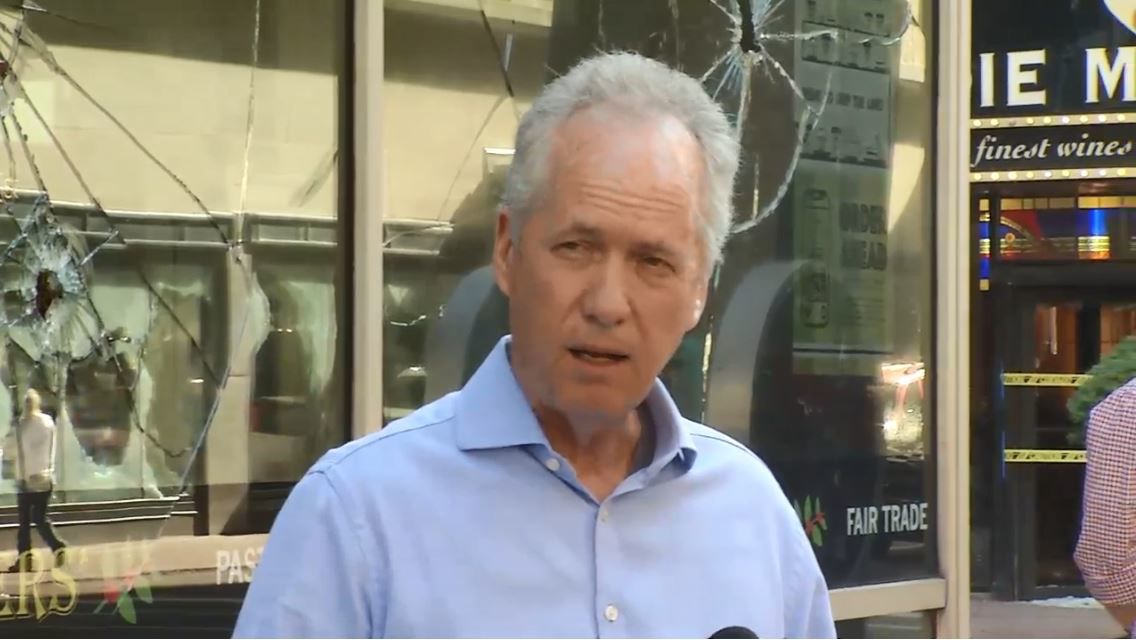 In a video message, Gov. Andy Beshear said he agreed to call up National Guard troops to help keep peace in Louisville after a night of violent protests and widespread property damage downtown.

Some groups marched peacefully to honor Breonna Taylor, the 26-year-old southwest Louisville resident who was shot to death by Louisville Metro police officers in her apartment on March 13. Other demonstrators broke windows, graffitied walls, raided businesses and set fires.

Police used tear gas to disperse protesters and made at least six arrests. Six officers were injured, and one was taken to the hospital with a likely concussion after having "a firecracker thrown at him," LMPD spokeswoman Jessie Halladay said Saturday.

"The tone clearly changed last night. The number of people on our street clearly changed last night as well. And this turned from being a peaceful protest into violence and terrorism and looting on the streets of our city," Fischer said while standing near the busted windows of a downtown coffee shop on Saturday morning. "Out-of-towners are here – anarchists intending to destroy our city. Louisvillians have to make it clear to them that they are not us, they do not represent the soul of our city."

"What we have seen ... are outside groups moving in, trying to create violence to harm everybody who is on those streets," Beshear said his video message.

Asked how police know that "out-of-towners" were causing problems during the demonstrations, Halladay said: "We have a lot of intelligence tactics that we use. We are monitoring social media. We obviously have people on the ground who can see the license plates of these folks who are coming out. So there is a lot of ways for us to do that.

"We’re not really ever going to be able to pinpoint a percentage, but it was a very clear situation that, I want to also point out, happened in cities around the country. There is an effort going on around the nation to create this kind of disturbance."

Beshear sent state police in riot gear to Louisville on Friday to help police manage the situation. Fischer said Guard troops will show up in Louisville later on Saturday.

"We're fully prepared to support the LMPD and other state agencies in protecting lives and preserving property," Kentucky National Guard Adjutant General Brig. Gen. Hal Lamberton said in a news release Saturday afternoon. "We will help ensure that our Kentucky citizens have the right to demonstrate peacefully and safely."

The Kentucky National Guard said 350 Kentucky Guardsmen are being sent to Louisville on Saturday afternoon to "augment the LMPD in and around the greater Louisville region," and "will be prepared to assist the police in maintaining peace and protect critical infrastructure," G3 Operations officer Col. J.B. Richmond said in a news release.

Officials said the guardsmen will "provide support as necessary to civil authorities as long as directed in order to ensure the safety of people and property."

What to know about Louisville's curfew

Residents who venture out during curfew hours face the possibility of being cited for a curfew violation and asked to return home, according to the city's official website.

Exceptions to the curfew include those going to or coming home from work or a worship service and anyone involved in "an action medically necessary to protect themselves, a friend or family member," according to city officials. Businesses can stay open but should not have any customers or patrons after 9 p.m.

Note: This story has been changed after Fischer corrected his description of the curfew, which is from "dusk to dawn" and not "dawn to dusk."