Jefferson Circuit Judge Charles Cunningham Jr. sided with the Jefferson County Board of Education in issuing a declaratory judgment in the board’s lawsuit challenging the constitutionality of aspects of Senate Bill 1, which takes effect Thursday, that single out Kentucky’s largest school district.

Other elements of SB 1, an omnibus education bill, that do not solely impact JCPS will become law Thursday.

The new law gave JCPS superintendents new authority over day-to-day operations, including raising their spending authority without board approval from $20,000 to $250,000; required two-thirds of board members to approve new policies, rules, bylaws and regulations; and limited the board to meeting once every four weeks to conduct district business.

Cunningham found the law’s language applying those provisions to any school district in a county with a consolidated local government like Louisville’s unconstitutionally singled out JCPS.

His order, which notes that the Kentucky Constitution does not allow the General Assembly to pass local or special laws specifically targeting the management of common schools, directs the board not to follow those provisions.

"The voters, parents, students, and taxpayers of Jefferson County are entitled to equal protection under the law," Cunningham said in his order. "In this context, the Commonwealth of Kentucky may not treat those folks arbitrarily."

"Given the impact the provisions would have over the education of Jefferson County students, over the considerable tax revenue Jefferson County taxpayers devote to their schools, and over local citizens' liberty to influence the path of their common schools with their franchise, (section two) of the Constitution prohibits an arbitrary assertion of control, or power, over those things," he continued. "Yet, there is no intellectually honest way to describe the provisions in question as anything other than an arbitrary assertion of power."

Diane Porter, the chairwoman of the Jefferson County Board of Education who represents District 1, applauded Monday's ruling.

"This ruling confirms our assertion that parts of Senate Bill 1 unfairly and unconstitutionally singled out Jefferson County and would interfere with our ability to represent the interests of the citizens and students in our school district," Porter said Tuesday in a statement.

"Judge Cunningham’s words confirm the necessity of this lawsuit: 'These provisions are a significant transfer of power away from the Board and no member worthy of their position would acquiesce in such a transfer to the extent the General Assembly’s enactment was unconstitutional.' With this distraction behind us, the board will continue to focus on the needs of every JCPS student as we prepare for the upcoming school year."

Glass was named as a defendant in the suit.

"Going forward, we urge the General Assembly to consider the Kentucky Constitution’s prohibition on special or local legislation which would have the effect of treating particular Kentuckians and their communities differently as they enact educational laws." Tatman said in a statement.

Attorney General Daniel Cameron's office did not immediately respond to a request for comment on Monday's ruling.

Cameron was served in the lawsuit since it raised a constitutional challenge. Cunningham, in his order, said Cameron's office made the case that SB 1's provisions singling out school systems in merged government's like Louisville's "as best as one could."

Heather Becker, executive director of civil and environmental law in Cameron's office, argued in a June 24 filing, in part, that SB 1 is constitutional because Jefferson County is not explicitly singled out in the new law.

"So long as the statute is written in such a manner that the group of persons, objects, or locales to which it applies is not static, the statute cannot be said to apply only 'to a particular individual, object or locale,'" Becker said in the filing. "... The number of counties to which the challenged portions of SB 1 might apply is not static. SB 1 is therefore not special or local legislation."

Cunningham disagreed with that argument, saying the unconstitutionality of SB 1 provisions solely impacting JCPS "is not even a close call."

"The Attorney General and his colleagues have done as good a job as one could, given the rather miserable hand they were dealt by the General Assembly," Cunningham said in his ruling.

A copy of Cunningham's order is available here: 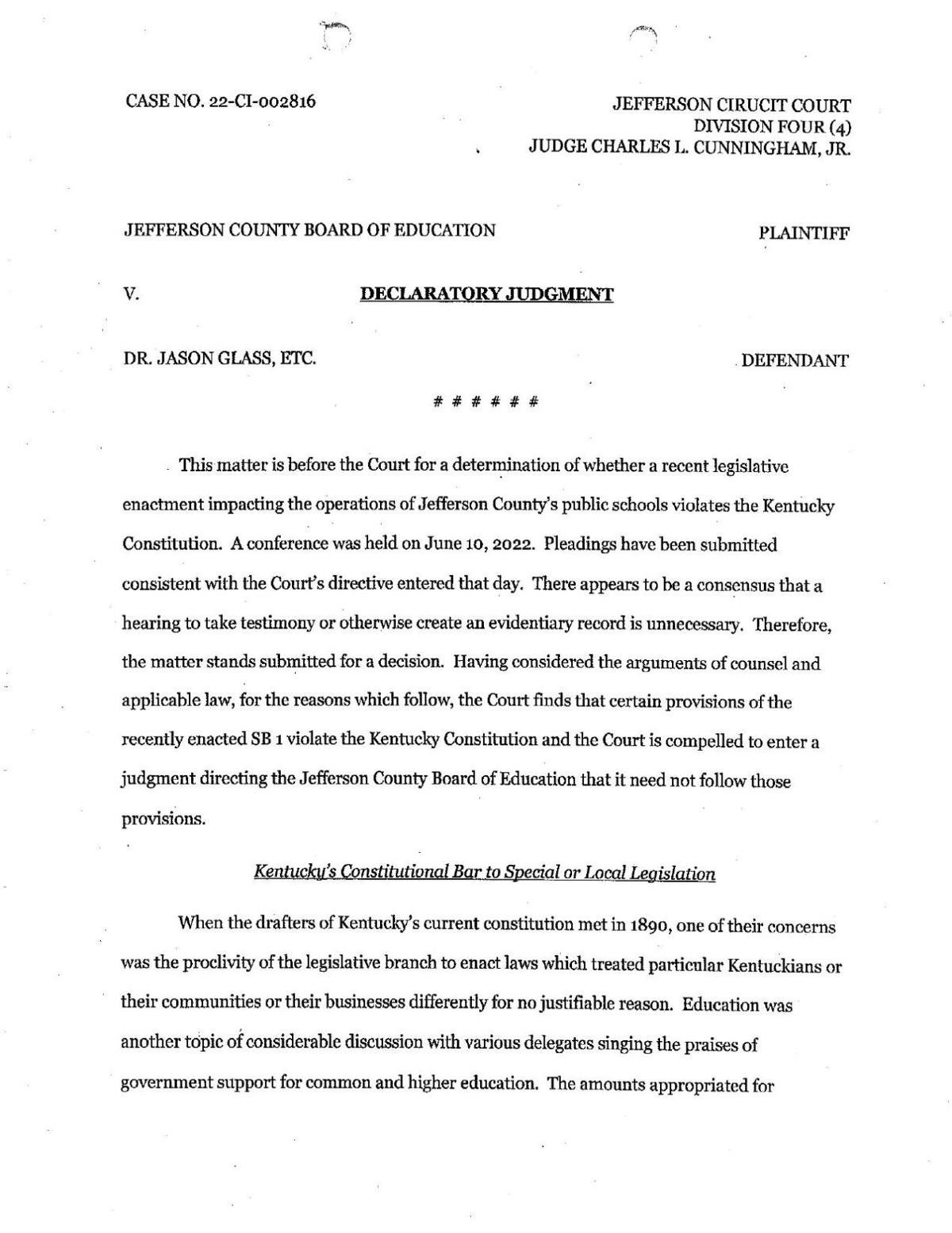