LOUISVILLE, Ky. (WDRB) -- The Jefferson County Board of Education filed a lawsuit Monday hoping to block a law set to take effect in July that places new restrictions on its authority over Kentucky’s largest school district.

The lawsuit, filed in Jefferson Circuit Court, names Education Commissioner Jason Glass as a defendant and challenges the constitutionality new limitations on the authority, procedures and meeting times the Jefferson County Board of Education in Senate Bill 1, passed by Kentucky’s General Assembly this year over Gov. Andy Beshear’s veto. Attorney General Daniel Cameron was also served in the filing.

The new law gives Jefferson County Public Schools superintendents new authority over day-to-day operations, including raising their spending authority without board approval from $20,000 to $250,000; requires two-thirds of board members to approve new policies, rules, bylaws and regulations; and limits the board to meeting once every four weeks to conduct district business.

Louisville attorney David Tachau argued in the filing that the new law violates the Kentucky Constitution, because it unfairly singles out JCPS and places requirements on the district that others throughout the state do not need to follow.

"An actual and justiciable controversy exists because the General Assembly lacked authority ... to enact the unconstitutional special legislation provisions," Tachau wrote in the filing.

The board seeks a temporary injunction blocking the new law from taking effect, set for July 14.

"The elected board of the largest school district in the state should not be subject to special and significant legislative overreach that restricts our ability to uphold our constitutional oaths of office," Diane Porter, the board’s chairwoman who represents District 1, said in a statement.

"The taxpayers of Jefferson County deserve to have elected school board members overseeing their schools in the same way as every other Kentucky school district. It’s unfortunate that we are forced to turn to the courts to right the wrongs the Kentucky Legislature has enacted against this board, the citizens, and students that we represent."

Glass "respects this opportunity for the court system to provide final clarity" on the issue, Kentucky Department of Education Chief Communications Officer Toni Konz Tatman said in a statement.

The commissioner is reviewing the JCPS board's lawsuit, she said.

"Given the constitutional prohibition on local or special legislation concerning the management of common schools, the JCBE presents a question that deserves review by the judicial branch," Tatman said.

"Like the JCBE members, the Commissioner took an oath to uphold both the Kentucky Constitution and the laws enacted by the Kentucky General Assembly. Our three branch system of government, specifically the judicial branch, is designed to respond to these situations where questions exist on how to honor and uphold both the state constitution and laws of the legislature."

A copy of the lawsuit can be found here: 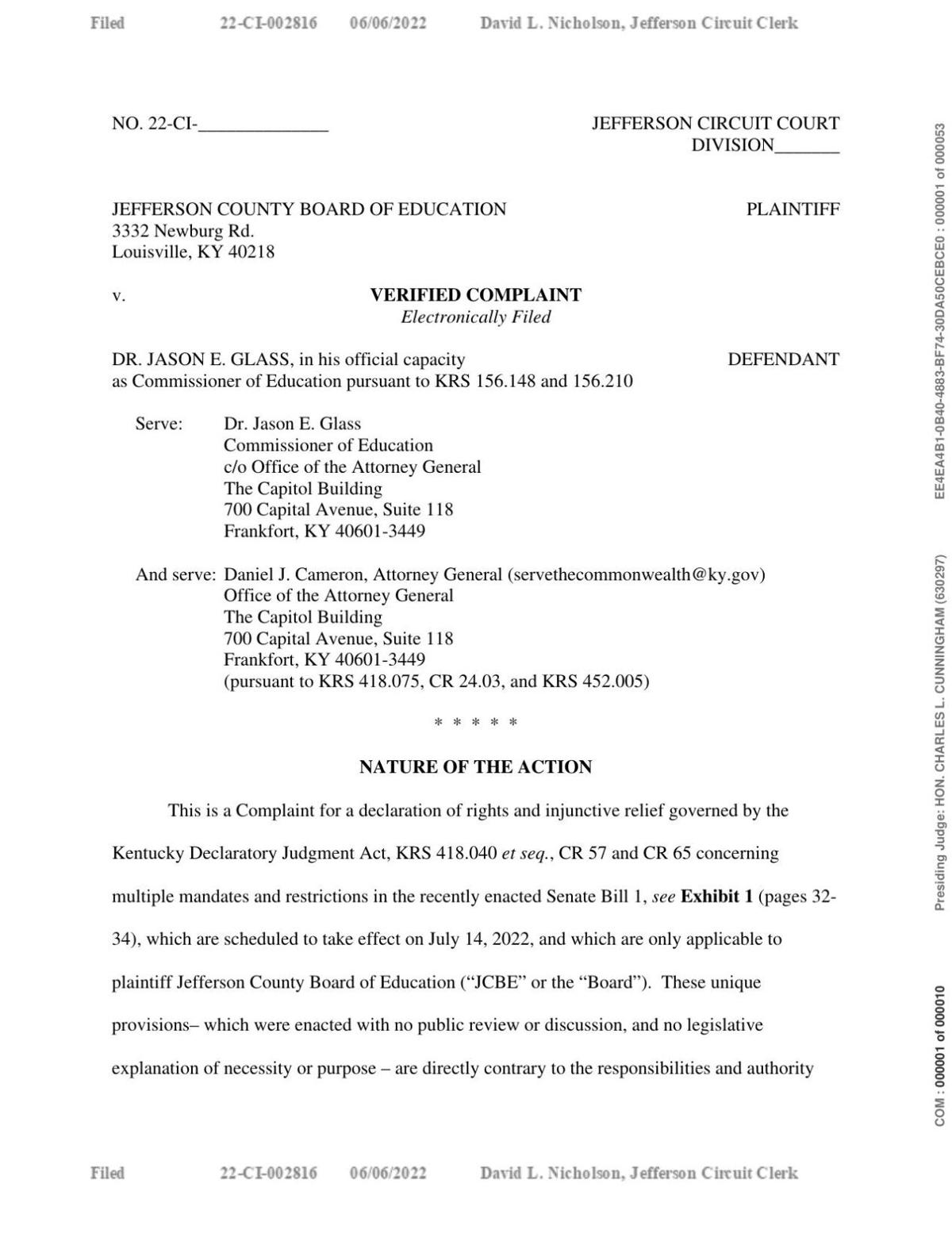