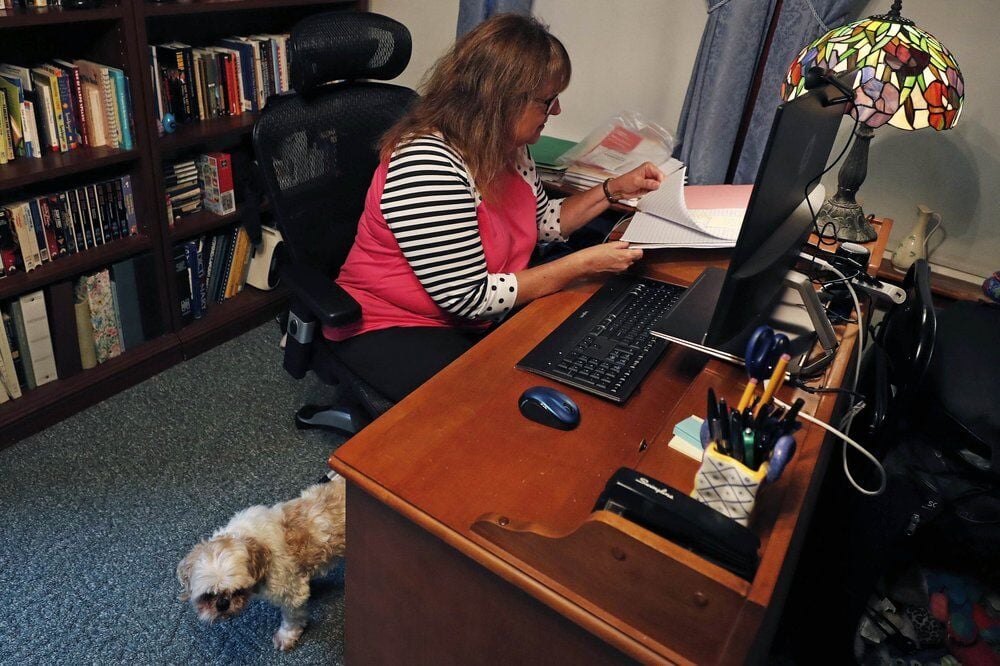 Ellen Boudreau works remotely at her home, Tuesday, Aug. 4, 2020, in Manchester, N.H. Boudreau, who was laid off from her full-time bookkeeping job for six weeks as the COVID-19 virus pandemic shutdown much of the area businesses, now works less than 10 hours per week with that employer, while also taking on a part-time, temporary worker job at another office. Walking out from behind her desk is her 15-year-old dog "Happy Go Lucky". (AP Photo/Charles Krupa) 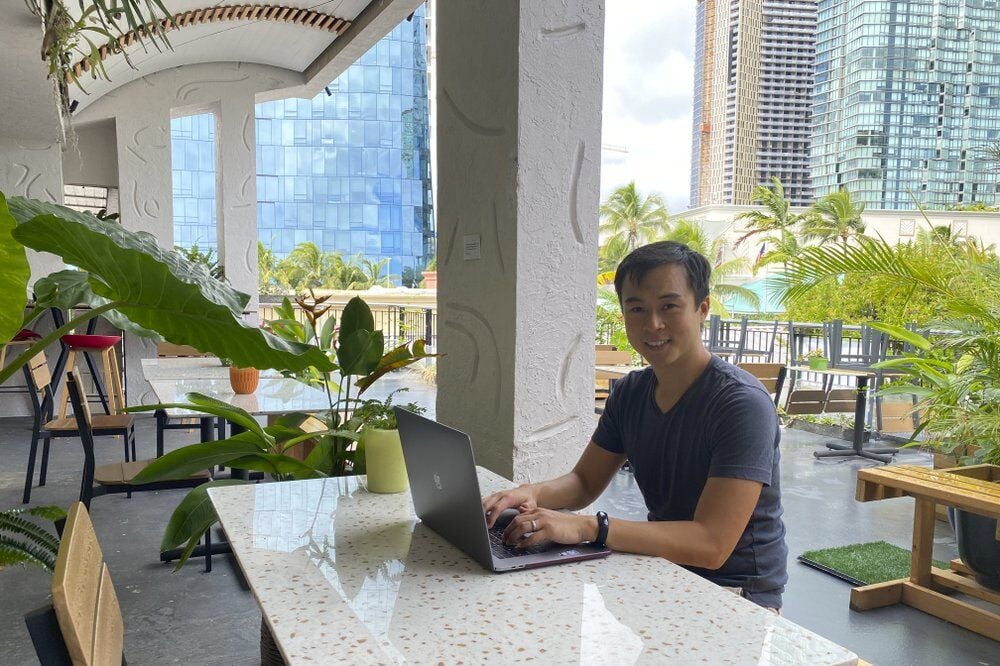 In this photo provided by Ashley McCue, Richard Matsui works from a coworking space on Nov. 18, 2020, in Honolulu. A group of Hawaii leaders is trying to attract more people like Matsui to work remotely in Hawaii during the pandemic. (Ashley McCue via AP) 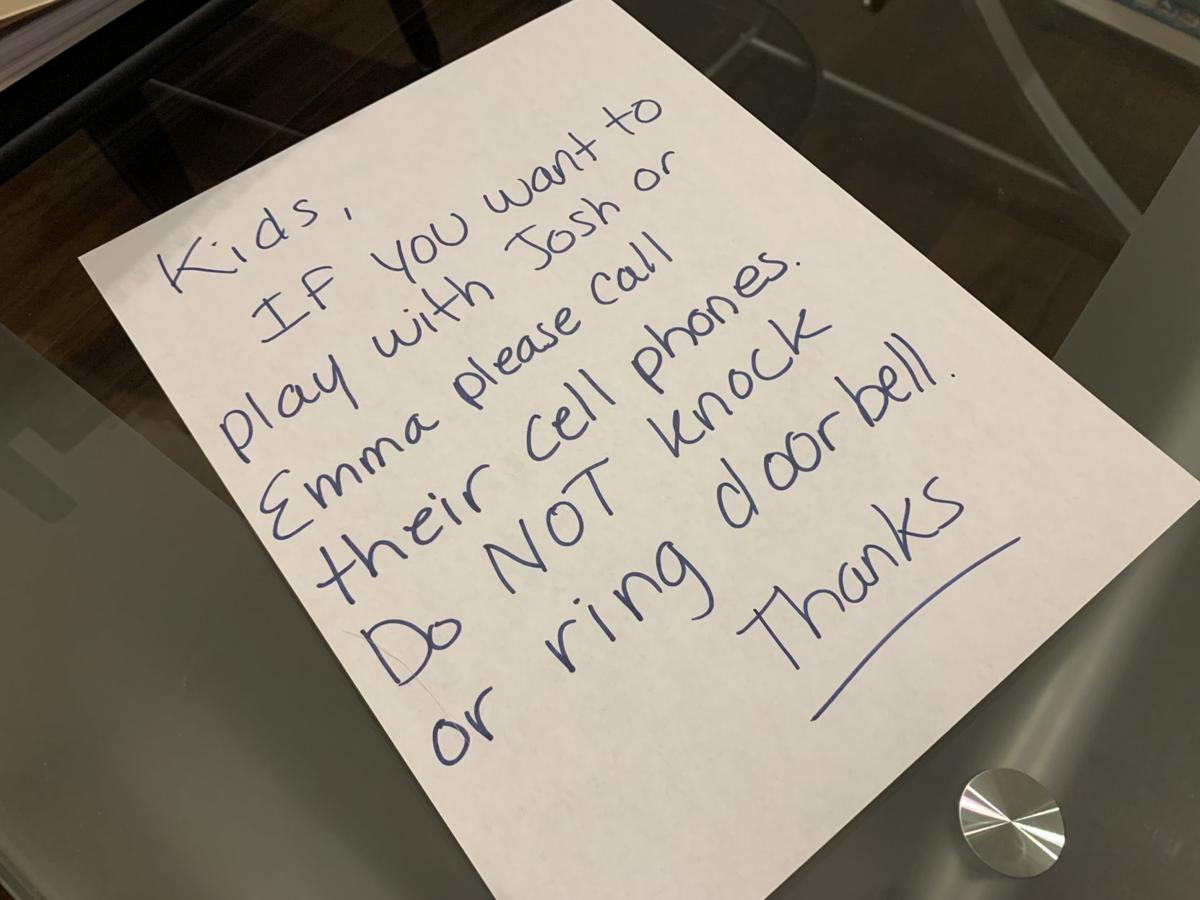 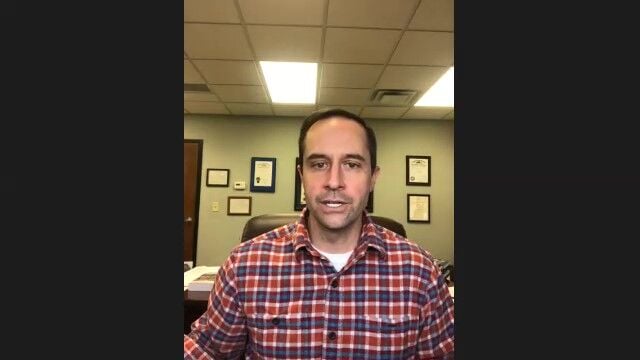 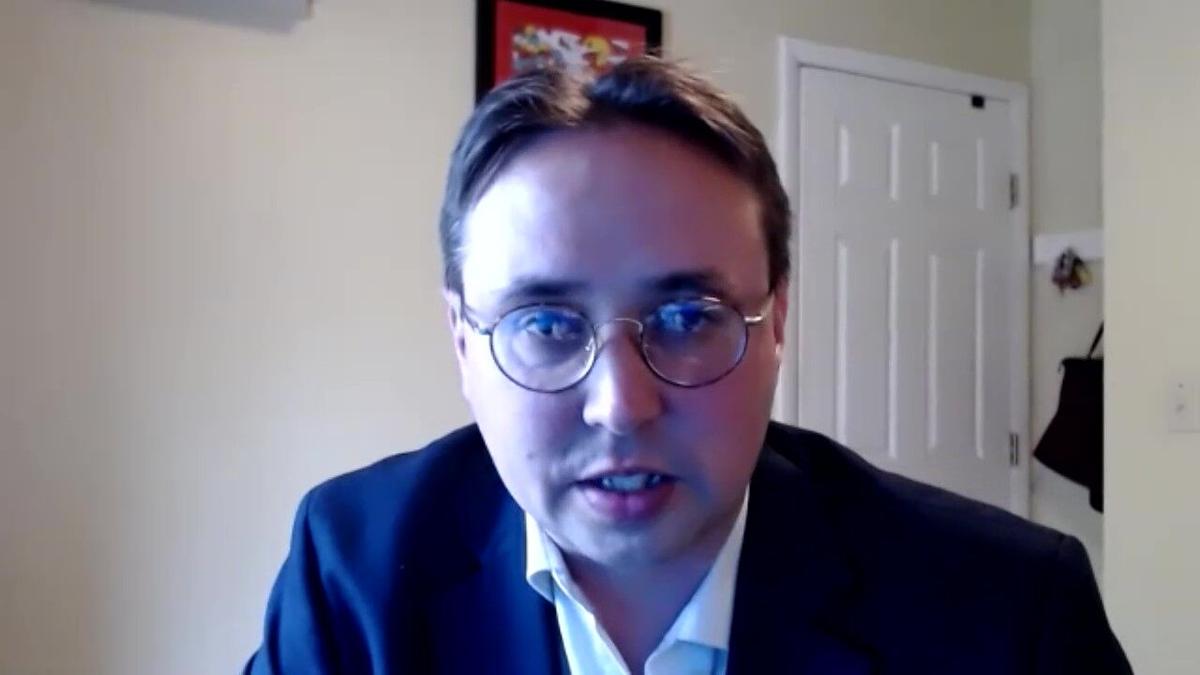 Ellen Boudreau works remotely at her home, Tuesday, Aug. 4, 2020, in Manchester, N.H. Boudreau, who was laid off from her full-time bookkeeping job for six weeks as the COVID-19 virus pandemic shutdown much of the area businesses, now works less than 10 hours per week with that employer, while also taking on a part-time, temporary worker job at another office. Walking out from behind her desk is her 15-year-old dog "Happy Go Lucky". (AP Photo/Charles Krupa)

In this photo provided by Ashley McCue, Richard Matsui works from a coworking space on Nov. 18, 2020, in Honolulu. A group of Hawaii leaders is trying to attract more people like Matsui to work remotely in Hawaii during the pandemic. (Ashley McCue via AP)

LOUISVILLE, Ky. (WDRB) – If you live in Kentucky and work at home for an out-of-state employer, you could be in line for tax credits worth up to $15,000 over five years, plus thousands of dollars more if you buy your first home in the state.

Kentucky is looking to compete with other localities and states in a pandemic-induced arms race to attract highly paid professionals who work from home and thus, can live anywhere.

But the Bluegrass State would become perhaps the nation’s most generous for remote workers under a plan unveiled Tuesday and quickly advanced without debate by the Republican-dominated state legislature.

“This would be, I think, the broadest incentive for specifically remote workers that I’m aware of,” said Katherine Loughead, a senior policy analyst at the Washington, D.C.-based Tax Foundation.

House Bill 372 is not a done deal. It still needs a vote of the House when lawmakers return to Frankfort later this month, and Gov. Andy Beshear would have final say on whether it becomes law.

Tax policy experts warn that the bill could blow a hole in the Kentucky budget without achieving the intended benefits.

“It’s not an incentive; it’s a windfall to many, many thousands of people already working from home,” said Jason Bailey, executive director of the progressive Kentucky Center for Economic Policy. “…You’re talking about something that is going to be massively expensive and just has not been thought through at all.”

The proposal would allow people who already live in Kentucky to claim the income tax credits. There is no requirement that workers be new to the state. It also makes no exceptions for the many bi-state metro areas where people live and work on either side of the Kentucky border.

For example, someone who lives Covington, Ky. but works for a Cincinnati-based company would appear to qualify for the credit, starting with an income tax break of up to $5,000 in the 2021 tax year.

HB 372 began as a tax break to attract data centers, but on Monday, the Senate budget committee introduced and immediately voted on substitute language that added the tax credits for remote workers.

“Remote working is here to stay and some of the best and brightest … will have their choice really of anywhere in the world to locate, and we want Kentucky to be the place that they choose, and we want provide them an incentive and a reason to come here,” Sen. Chris McDaniel, R-Taylor Mill, the budget committee chairman, said when introducing the rewritten bill to his committee on Tuesday.

A few hours later on Tuesday, HB 372 passed the Senate 30-4 without debate or any verbal reference to the new tax breaks for remote workers.

The bill now awaits concurrence in the House when lawmakers return to Frankfort on March 29. If the House gives it final passage, Gov. Andy Beshear will have the last word, as the legislature would not have time to override a potential veto.

Beshear’s office did not immediately respond when asked if he supports the remote worker incentives. His economic development cabinet declined to comment on Tuesday.

In an interview on Wednesday, McDaniel acknowledged that the bill would “conceivably” reward people who already live in Kentucky.

“There will be some who slip through the cracks on this, but we don’t think the number is that dramatic right now,” McDaniel said.

McDaniel provided no data to support that assertion. Legislative staff were unable to estimate the cost of the tax breaks, as “there is no data related to the number of remote workers in Kentucky or the amount of income earned by those workers,” according to a fiscal note prepared for the bill.

McDaniel said he is open to tweaking the language and that the Kentucky Department of Revenue would provide additional safeguards through regulations.

“You don’t want to have somebody who … they work for a company in downtown Cincinnati, but they get to stay in Covington and work remotely and go across the bridge once a week. That’s not what this is intended for at all,” McDaniel said. “This is intended for people … who are highly mobile, skilled, (have) high paying jobs, that they can live wherever they want, and we want them to live here.”

The credit would be available to an individual who “works from his or her principal place of residence in Kentucky for a business entity that is only doing business in this state through the presence of employees located in this state,” according to the bill.

It does include safeguards against self-employed people gaming the system by registering their small businesses in a different state. The business cannot be affiliated with the worker through ownership or family connections.

If the worker is a first-time homebuyer, he or she would be entitled to an additional credit for the value of the state property taxes on a Kentucky home purchased during the five-year period.

The credits would be nonrefundable, meaning they could reduce a worker’s state income tax to $0, but Kentucky would not cut a check back to the worker for any unused credit.

Loughead, the analyst at the Tax Foundation, said a handful of cities and counties have rolled out remote-worker subsidies, some funded with government and others with private dollars. These include Tulsa, Oklahoma; Tuscon, Arizona and Savannah, Georgia.

McDaniel said his five-year plan for Kentucky differs from those “flash in the pan” offers. It would ensure an enduring commitment from workers who might start families and put down roots in the Bluegrass State, he said.

But Bailey, of the Kentucky Center for Economic Policy, said tax credits do not sway decisions about where people – especially highly paid professionals – choose to live. Things like amenities and the quality of public education do, he said.

Reducing state revenue through the proposed tax credit would “take away from dollars that you need for those improvements in amenities and quality of life,” he said.

Loughead added that the policy might seem unfair to the many Kentucky residents who work from home for in-state employers.

“I could see that creating a lot of backlash for those who don’t qualify for this, for one reason or another,” she said. “It really picks and chooses the winners and losers.”

Bailey said the credit could even create a perverse incentive for Kentucky businesses to move to border states so their workers earn more money.

“If you live on the border, it’s an incentive for your employer to move to the other state,” he said. “…This is just an enormously bad idea.”