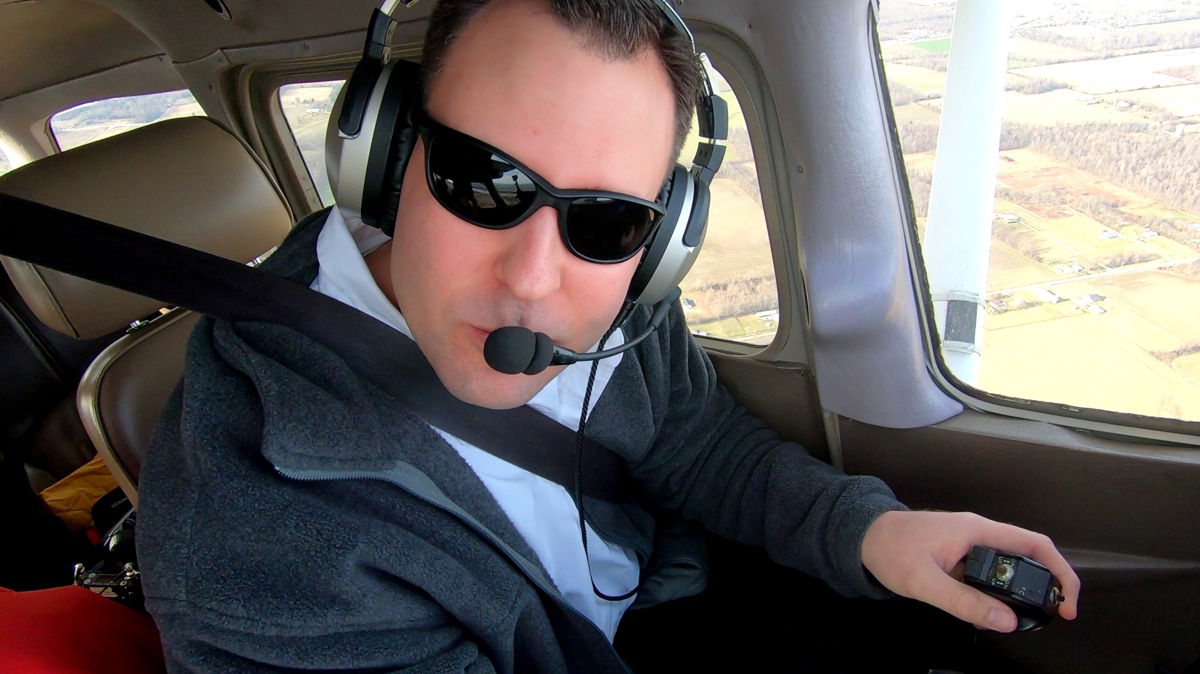 Robert Patterson, scans the sky over Louisville from the pilot's seat of a Cessna airplane on Saturday Feb. 15, 2020. (WDRB Photo) 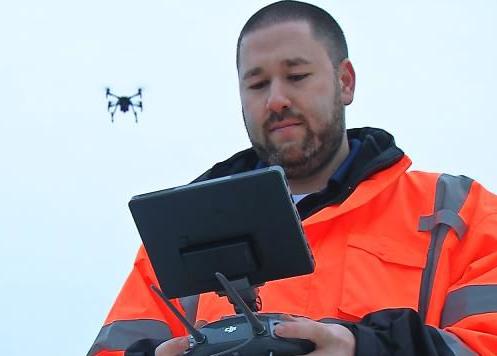 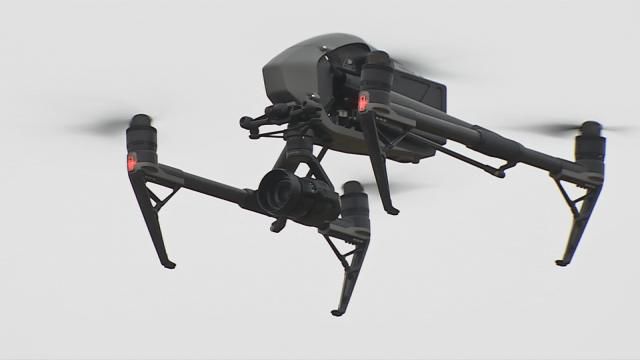 A DJI Inspire 2 in flight, one of the WDRB Skycam drones. 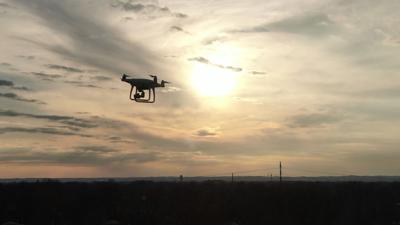 LOUISVILLE, Ky. (WDRB) – Last May, when a pilot reported that a drone came within five feet of their airplane while taking off from Louisville’s Bowman Field, law enforcement was not contacted.

The drone operator was never identified and there was no punishment for the violation of airport airspace.

In fact, right now, there is no way for pilots or air traffic control towers to remotely see where drones are in the sky. To avoid them, pilots simply have to look for drones while flying.

A WDRB News review of Federal Aviation Administration data shows that close calls between drones and aircraft is not uncommon, although very rarely are drone operators punished for violating protected airspace.

As the drone industry continues to grow, the number of encounters reported by pilots flying into and out of Louisville-area airports also continues to rise.

Through the first half of 2019, there had been eight encounters at Louisville airports alone, according to the most recently available figures.

There were nearly 100 such near-miss instances in Kentucky and Indiana over that time. Most of the documented drone sightings occurred near airports.

These types of close calls have led the federal government to scrutinize the relationship between drones and traditional aircraft to avoid collisions, and consider greater restrictions on drone flights as the hobby and profession becomes more popular.

“For a lot of years we figured out how to share airspace with other airplanes, helicopters, but now we're sharing that airspace with drones,” said Robert Patterson, a private pilot and flight instructor in Louisville. “That's caused a lot of concern.”

Robert Patterson, scans the sky over Louisville from the pilot's seat of a Cessna airplane on Saturday Feb. 15, 2020. (WDRB Photo)

While there have been no drone strikes of airplanes in Kentucky, it has happened in other states. And a 2018 study concluded that a typical sized hobby drone could cause significant enough damage to bring an airplane down.

Recreational drones first gained popularity in 2015 as manufacturers were able to outfit drones with easy-use flight controls often times paired with high-definition cameras. Within in a year, drone sales tripled nationwide, according to Forbes.

“There was a Christmas a few years back where it seemed like everybody got a drone that year,” Patterson said.

However, the exponential increase in drone sales led to a similar boom in close calls with aircraft.

In another local example from July 26, 2018, an Airbus A300 was on final approach for landing into Louisville Muhammad Ali International Airport when pilots spotted a drone at the same altitude just off the plane's right side hovering near Cardinal Stadium. Airbus A300 are planes used as both passenger and cargo jet.

A summary of the incident noted the Louisville Metro Police department was called.

Drone enthusiasts, however, argue that sightings can be unreliable.

“It's easy to blame a drone when you see something out of the corner of your eye,” said Justin Hilliard, a drone pilot and founder of Remote Aerial.

Hilliard also holds a private pilot’s license but primarily flies drones as part of his imaging business. He contracts with construction companies to do pre-site surveys and sometimes works with emergency personnel for rescue operations.

He says that planes are often moving too fast for pilots to quickly identify a drone versus a large bird or even a balloon. Aircraft pilots don’t disagree with that criticism.

“There's a lot of drone sightings that get reported that are questionable at best,” Patterson said.

As drones available to the public became more popular and more advanced, the FAA has struggled to keep pace with appropriate rules and regulations.

Two FAA employees, who asked to remain anonymous because they were not authorized to speak with the media, described the situation with drones in 2016 and early 2017 as “the wild west.”

Hilliard noted the "industry took off so quickly. It was unexpected and there was no staffing in the FAA to really enforce (rules) or educate the public.”

And the rules are much stricter for commercial drone pilots than they are for hobbyists.

Operating a drone for work or business purposes requires an FAA license. These are distributed through regional FAA offices and require that operators pass a multiple choice test. The license must be renewed every year.

But it is different for hobbyists.

“They don't have the requirement of taking the test,” Patterson said. “You could go down to Best Buy today and pick up a drone and be flying tonight.”

Up until the spring of 2019, hobbyists could fly within five miles of an airport. Commercially licensed drone operators were never permitted to operate in similarly controlled airspace.

On most store-bought drones, there are built-in restrictions structured around GPS systems that prevent the drones from even taking off in restricted airspace, such as near airports. However, many people have discovered workarounds to disable the GPS systems and allow them to take off and fly in those zones.

Several videos posted to YouTube in 2017 show at least three clear violations of protected airspace by a drone operator in Kentucky. In one video shot from a drone in May of that year, an operator circles Bowman Field before pausing at the end of a runway where a small plane can be seen taking off. It appears as if the pilot moves to avoid the drone.

“I've spent a good part of my life flying around Bowman field, in that very vicinity where that drone video was taken and it's concerning and it’s scary,” Patterson said. “That level risk and irresponsibility, it's just hard to fathom.”

In another video, the same drone operator is flying around the University of Louisville’s Cardinal Stadium. The stadium is in a restricted no-flight zone because it final approach path of planes that land at Louisville’s Muhammad Ali International Airport. Near the end of the video, the shadow of a wing of a large airplane passes through the frame indicating the plane was just above the drone. Attempts to contact the person who posted the videos were unsuccessful.

A DJI Inspire 2 in flight, one of the WDRB Skycam drones.

"WDRB only uses licensed pilots who go through rigorous training above and beyond federal standards," said Vice President of News Barry Fulmer. "Safety is our top priority before and during every flight."

According to the FAA, there are around 166,000 federally licensed drone pilots in the U.S. but there are more than 1.5 million registered drones. The quickest remedy for violation of the rules for commercially licensed pilots is to revoke their license. The FAA had not provided data relating to how many licenses have been revoked as of Wednesday afternoon.

A Louisville Metro Police spokesperson said they were unaware of anyone being cited or charged for illegally flying a drone in protected airspace in Louisville.

“To me, it makes good sense that once the rules are out there, they've been communicated; there is proper education in place that someone should be held accountable for putting someone else's life at risk, Patterson said.

For the most part, drones largely can't be tracked by the FAA for location or altitude in real time. Instead, general aviation pilots simply rely on line of sight.

“It's just a split second where you get to see it or identify it,” Patterson said. “Every time I've heard someone report that or talk about that, it was a surprise to them. They were shocked to see it.”

In December the U.S. Department of Transportation proposed a rule that would require all drones be remotely identifiable, similar to how planes are.

Many believe this is the result of the FAA is playing catch up with additional rules and regulations, creating angst among commercial and hobbyist drone pilots alike.

“Certainly there has been a bit of catching up that’s been taking place and figuring out how to enforce the rules and even how to monitor things is a challenge,” Patterson said.

Called "Remote ID," the program would integrate drones into the existing airspace of the U.S. and allow the FAA to identify a drone’s relative location, speed and altitude.

“That’s going to be a huge ability to track where people are,” Hilliard said. “It kind of does unfairly penalize the people who if you go out and buy your kid a drone and just want to fly around in the backyard, it's a little more limiting than it should be.”

The FAA is seeking comments about the proposal through March 2. After the feedback period, the FAA may develop and implement a final rule.

The rule has been widely criticized in the drone community because of worries that it might require monthly fees for operators in order for the drone to connect to a network to broadcast location data to the FAA.

A study done in 2018 by the University of Dayton Research Institute contemplated what would happen in the event of a drone striking an aircraft. In a worst-case scenario, the study found, a typically hobby-size drone could damage a plane badly enough to cause it to crash.

The National Transportation Safety Board, which usually investigates the causes of large-scale transportation accidents, said it has only looked into two cases where a drone and plane have collided.

"We kind of jokingly call it 'big sky little airplane,'" Patterson said. "So statistically speaking, it would be very difficult to have a mid-air collision but it would also be very unforgiving."