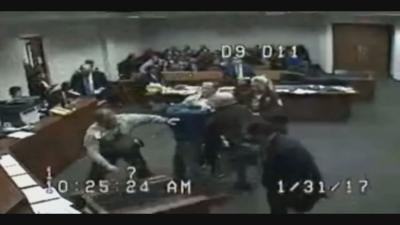 LOUISVILLE, Ky., (WDRB) -- When Judge Sean Delahanty asked Kisha Johnson to come forward from the back of his courtroom to address criminal charges, she responded with an unusual question.

Because it’s the law, Delahanty told Johnson in a 2017 case, explaining she was legally required to stand before him to be arraigned, or hear and respond to the charges against her, which included possession of marijuana and tampering with physical evidence.

Johnson eventually approached the judge, but not before asking Delahanty to prove he had any authority over her. Delahanty pulled out a book of Kentucky’s statutes; Johnson said it proved nothing.

“There’s a simple way for me to prove jurisdiction to you and that would be for me to ask the deputy to take you into custody,” Delahanty responded.

And that’s what soon happened. After Delahanty found her in contempt, bedlam broke out in the courtroom with Johnson knocking over a podium as several deputies struggled to take her into custody.

While a bizarre scene, Johnson’s actions were not unfamiliar to Delahanty – or other judges, prosecutors, defense attorneys and police officers.

Johnson is a part of the “sovereign citizen movement” that rejects common institutions, from the legal system to police authority.

Members believe that while they live in the United States, they are separate and not bound by the country’s laws.

Some court officials in Kentucky say these types of defenses are becoming more frequent, although they typically fail to succeed. Nevertheless, such pseudo-legal posturing can tie up courts and drain resources already stretched thin.

Assistant Jefferson Commonwealth’s Attorney Leslie C. Bates said the court cases become a “quagmire,” bogging down the system because there is “no ability to negotiate as they simply won’t acknowledge your existence for the most part.”

Bates, for example, has an ongoing felony case involving a sovereign citizen charged with obstructing a car tag, a minor case that is typically disposed of quickly, often amended down to a misdemeanor with little punishment.

But this case has lasted several months as the defendant has refused to cooperate.

“It’s kind of demonstrative of the inability to resolve it … because we can’t get the cooperation of the individual,” Bates said.

“It’s like a stalemate,” said Assistant Commonwealth’s Attorney Doug Meisel. “Each of these cases is going to be a stalemate for as long as it takes for that person to acknowledge (the court’s authority). It becomes a little bit a battle of wills.”

According to the Southern Poverty Law Center, sovereign citizens believe they decide which laws to follow and which to ignore, don’t have to pay taxes and aren’t required to obey judges, juries, law enforcement and elected officials.

The movement comes from a conspiracy theory that the U.S. government was secretly replaced by a new system around the civil war and that U.S. citizens are enslaved as collateral to back the dollar to ensure the value of gold, according to the Southern Poverty Law Center.

Sovereign citizens often don’t accept help from the lawyers appointed to defend them and refuse to recognize even the most basic courtroom procedures, much less accept they have violated the law and can be punished.

Even in the simplest of cases, like a traffic ticket, they often file numerous indecipherable motions that ramble for page after page filled with pseudo-legal nonsense. And, in what has been deemed “paper terrorism,” they submit fake property liens or tax forms in hopes of hurting an enemy’s credit or get them audited.

“You can’t reason with them,” Delahanty, who is no longer on the bench, said in an interview last week. “Logic -- reason -- is not something they respond to.”

'Bad things are going to happen'

Even when the cases against sovereign citizens are over, court officials are often not finished dealing with them.

It is not unusual for sovereign citizens to file lawsuits against those who try to arrest and prosecute them.

“You can almost be assured that if you have a sovereign in your court, you are going to get sued,” Delahanty said.

In one recent lawsuit, Jerome Jointer, who now goes by “Noble Jerome Bey” filed a federal complaint in August from the Hardin County jail against several Elizabethtown judges, attorneys and other court officials.

He argued the state had no jurisdiction over him as he was bound to the “Zodiac Constitution” and invoked the “Treaty of Peace and Friendship of 1787-1836 between Morocco and the United States of America” – among other nonsensical claims spanning 35 pages.

Sovereign citizens’ appeals of convictions and dismissed lawsuits are often dealt with swiftly as well.

A 2015 Kentucky Court of Appeals case ruled one man’s argument in appealing a dismissed lawsuit as being so full of nonsensical arguments and mired in “sovereign citizen rhetoric and philosophy that meaningful review is impossible” and “practically invites sanctioning as a frivolous appeal.”

Court officials said most sovereign citizens are typically arrested for minor traffic violations or drugs, not dangerous crimes, but their refusal to work with the system slows everything down and drags the cases out for months or even years.

A typical arraignment of a defendant takes just a couple minutes in district court as the judge reads the charges, a not guilty plea is usually entered on behalf of the person and the next court date is scheduled.

But, as shown with Johnson, there is often nothing quick or easy even in just trying to enter a not guilty plea for a sovereign citizen.

For starters, they often informally change their names and refuse to answer to their legal identity.  They also argue their names are not spelled in all capital letters, which is how it is shown on court computers.

A May 22, 2018, arraignment of Trevis Burgos took more than 30 minutes as Burgos initially told Jefferson District Court Judge Anne Haynie he didn’t know why he was in court and objected to her entering a not guilty plea on his behalf - in part, he said, because he wasn’t Trevis Burgos.

He said his name was “Travis Bey” and he was representing Burgos.

“Are you saying you are not Mr. Trevis Burgos?” Haynie asked.

“I don’t know who that is,” he responded. “My name is spelled in upper case and lower case letters.”

Pulled over five days earlier by a Louisville Metro Police officer, Burgos allegedly did not have insurance, had forged tags and marijuana and wouldn’t provide police any identification, except for “the false name of Travis Bey,” according to the citation.

Burgos told police they had no jurisdiction over him and then filed a similar motion in court, arguing only God had authority over him and he was not bound by the Constitution or subject to the laws of the United States.

In a subsequent court hearing, he again refused to acknowledge he was Trevis Burgos or accept an attorney, but he reluctantly participated, questioning the arresting Louisville police officer, Dwaine Durrett.

“Why are you saying I’m Travis Burgos?” Burgos asked the officer. “Where did you get that information?”

Burgos argued with most of the officer's answers.

“Let the record reflect the officer did not answer with any type of information,” Burgos said before the judge told him to move on.

Burgos then began questioning Durrett about whether Kentucky was a “commercial entity” and on and on it went.

While Burgos refused to give police his license or registration when he was pulled over, his arrest was handled without incident and he eventually pleaded guilty.

But sovereign citizens can be a danger to police trying to pull them over, by fleeing, threatening officers and even pulling weapons in their refusal to acknowledge they are bound by any law.

In Arkansas in 2010, a father and son who reportedly identified as sovereign citizens shot and killed two police officers during a traffic stop.

In fact, they are considered a domestic terrorism threat because of violent acts towards law enforcement.

A 2014 study by the University of Maryland, which polled hundreds of officers across the country, found sovereign citizens are perceived to be the most serious threat to law enforcement.

Delahanty, the former judge, said sovereign citizens will sometimes not comply with police commands and the officer will have to break a vehicle window and pull the person out.

“It’s difficult to deal with someone who has a delusional belief system,” Delahanty said.

LMPD did not respond to requests for comment for this story.

During a 2017 trial of a sovereign citizen over misdemeanor disorderly conduct charge, Louisville Metro Police Officer Austin Allen testified the defendant refused to get off of a TARC bus and told police they would “have to drag him off.”

“He mentioned multiple times we should … shoot him,” Allen testified, telling jurors police gave him multiple opportunities to get off the bus but he refused.

Body camera video from the trial shows several officers handcuffing and removing the man from the bus.

Court officials say most sovereign citizens are not a danger and, in the end, while they frustrate the justice system, their actions eventually are most harmful to their own cases.

“Ultimately it’s going to end really badly for that person because they are going to do that which we tell everybody not to do which is represent yourself,” defense attorney Brian Butler said. “And they are going to appear as if they are all someone we should all be afraid of and it’s not a good situation to do that. …

“If you keep pushing it, bad, bad things are going to happen to you.”