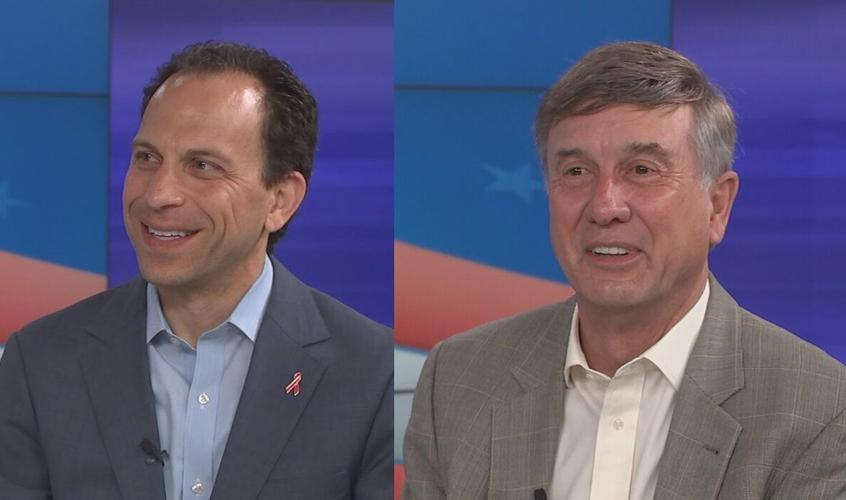 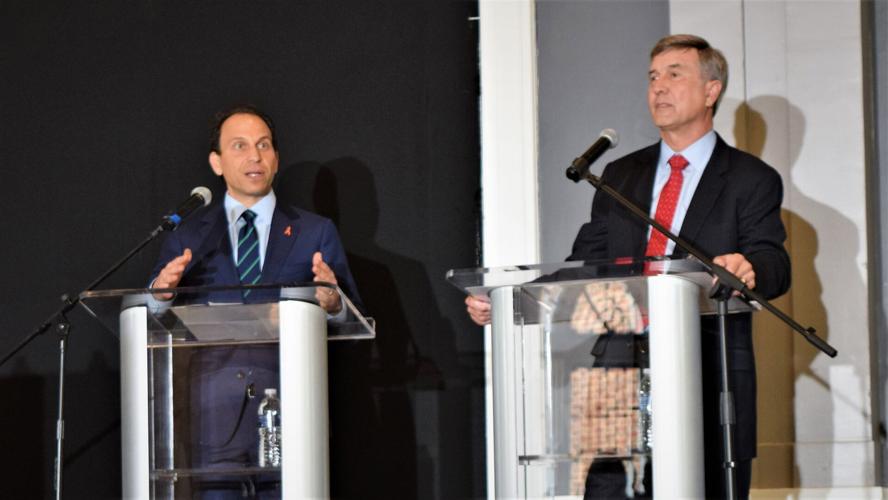 Democrat Craig Greenberg, left, and Republican Bill Dieruf appeared Tuesday, June 14, 2022 at a Greater Louisville Inc. forum at the Olmsted. Greenberg and Dieruf are their parties' nominees for Louisville mayor.

Craig Greenberg and Bill Dieruf are speaking out about their top priorities.

LOUISVILLE, Ky. (WDRB) -- On Wednesday, Craig Greenberg, a Democratic candidate in the race for Louisville's mayor, released what he said will be his top priorities, issues ranging from gun violence to universal Pre-K should he become mayor of Louisville on Jan. 2.

The announcement came even as Bill Dieruf, the leading Republican candidate for mayor and the current longtime mayor of Jeffersontown, criticized the current Democratic administration and announced his plans to seek greater fiscal management and transparency within city government.

Called "A New Direction: Day One Priorities," Greenberg's plan offers what he calls, "a fresh, energetic approach to providing the safety and services every citizen deserves."

"Too much time has been wasted studying our problems instead of solving them," Greenberg wrote in a cover letter for the plan. "The time for endless studies and patience is over. Our city is demanding action." 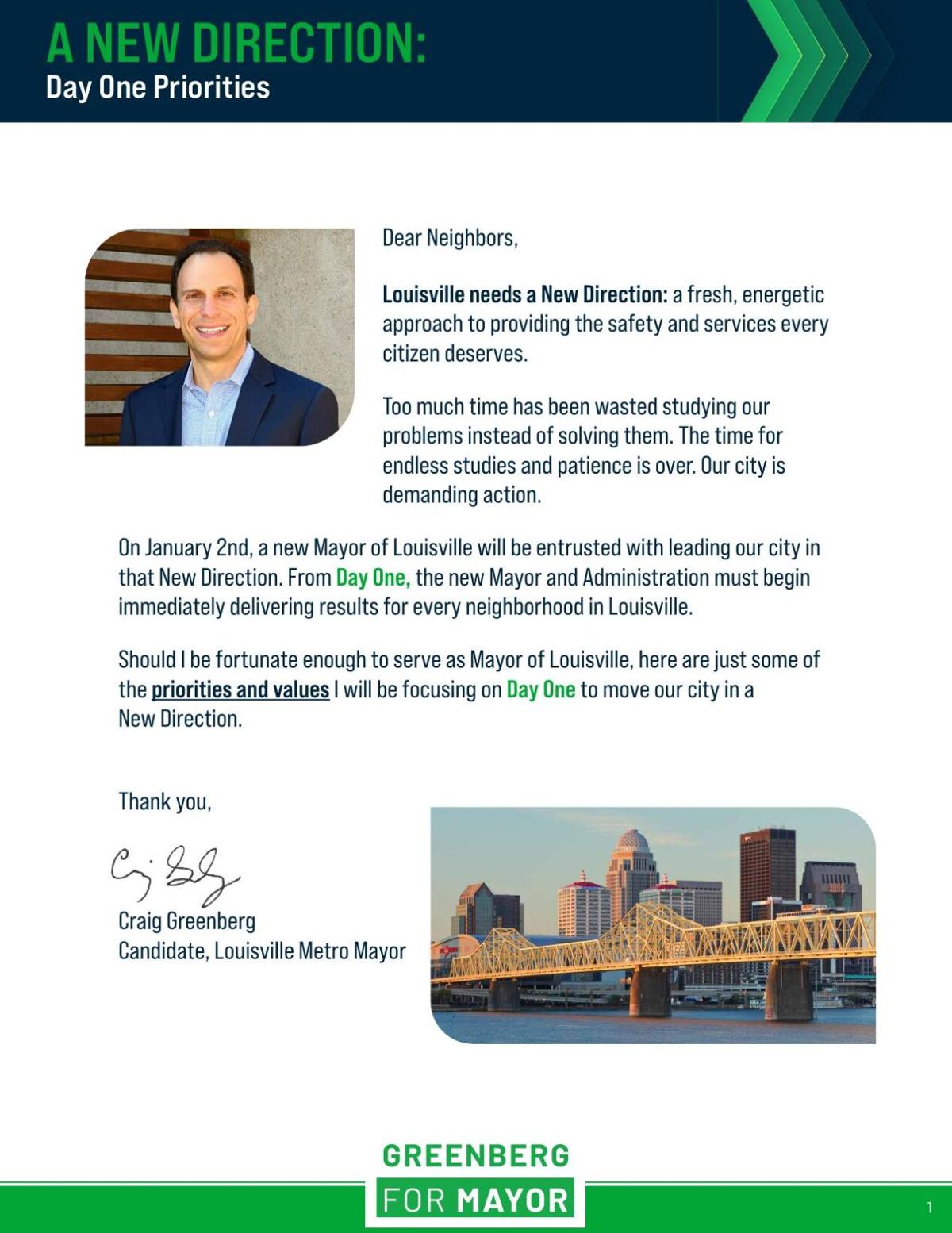 As previously reported by WDRB, Greenberg, a businessman who used to run Louisville's 21c Museum Hotels, plans to change the treatment of firearms confiscated as a result of a crime. Typically, those guns are turned over to Kentucky State Police, where they are auctioned off for funds. It's a practice Greenberg calls "absurd and dangerous.

"Our law enforcement spends thousands of hours, and millions of taxpayers' dollars to get guns off our streets, only to see them return to terrorize our neighborhoods."

According to his plan, Greenberg would comply with the law by handing over the guns but only after rendering each firearm inoperative. 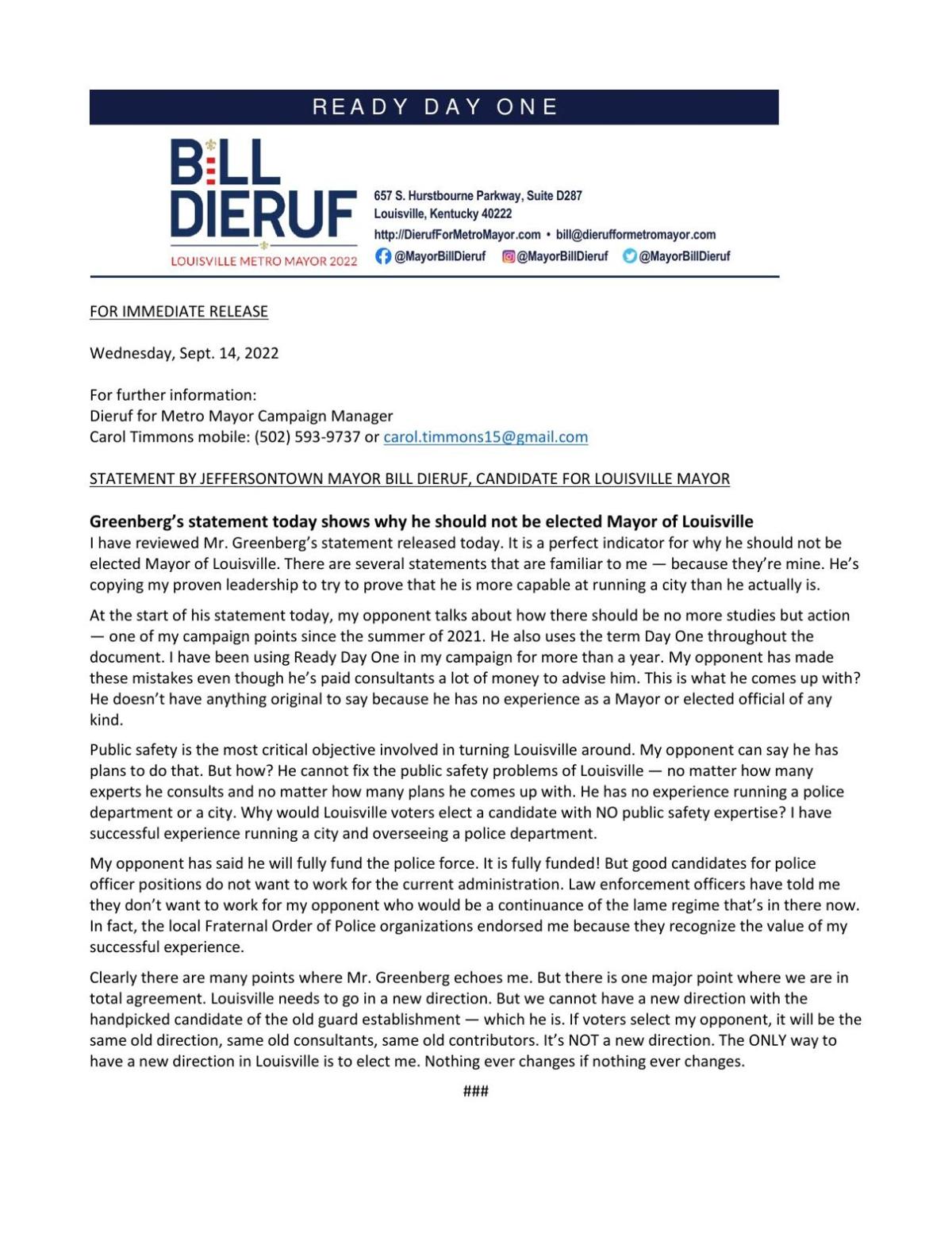 In a Sept. 10 interview with WDRB, Fischer addressed the investigation.

"When the Department of Justice releases their investigation report, just know that we have been hard at work on much of what's in their report," Fischer said. "I'm sure what's not in their report we'll get to work on."

Dieruf predicted that the report would be "a damning indictment of their leadership and that of their predecessors" and called for the DOJ to release the report "as soon as possible." He added that Fischer and Shields should immediately release any available information they have about the report's preliminary findings.

"They waited until they got caught allowing these systemic problems to continue that should have been fixed long ago," Dieruf wrote. "Shame on them for trying to make it sound like they have been working hard to fix problems when they — and their longtime controlling interests — created them."

On the issue of women's safety, Greenberg said he will make Louisville "a safe place for women and girls" by clearing the way for abortion access and fighting Kentucky's ban on abortion, which he calls, "far too extreme." Without going into specifics, he also said he will focus on "intensifying efforts" to fight domestic violence.

Greenberg called the city's homelessness situation a "crisis" and — without offering specifics — said he will "begin working to make sure we are providing safe shelter and services to those who need it, while also helping to ensure public spaces are safe and available for use by everyone."

Additionally, he said he plans to "clean up the mess" by, among other things, removing all wrecked and abandoned vehicles from the city's streets within 48 hours of assuming office and taking part in cleanup efforts.

He also plans "new investments for improved facilities and accessibility for all" and Louisville's parks and green spaces.

All of this, his plan states, will be combined with an effort to make it easier for businesses to invest in Louisville by "modernizing our planning and zoning process, eliminating red tape and closely working with people who want to invest in our city and create good-paying jobs that revitalize neighborhoods."

Dieruf, said the key to revitalizing downtown is to give LMPD smaller geographic divisions and a district focused solely on downtown. In a June 14 debate, Dieruf said Louisville can lure people from larger metro areas.

"We've got to attract the people from Chicago, from New York and all the bigger cities," Dieruf said. "Because, during the pandemic, those people didn't want to be there. They wanted to be in a community like Louisville. Louisville has everything that they have, being on a smaller scale, (a) more friendlier scale. We are family here."

One priority referenced by Greenberg's plan is increased support for minority-owned businesses.

Part of being equal and equitable, Greenberg argues, is creating what Greenberg calls "real grocery stores" for west Louisville, which he calls a "food desert."

Greenberg went on to express support for "universal, quality Pre-K for every three- and four-year-old child," a development he said would be "life-changing" for children.

"On Day One, Craig Greenberg will begin building a pilot program to ensure that every child has access to the remarkable benefits of quality Pre-K and that all families can have the best for their kids," the plan states. "This program will change the trajectory of Louisville's future generations."

Dieruf, meanwhile, called for greater fiscal management and transparency within city government. He said if he became Louisville's mayor, he would pursue this transparency by attaining the Certified City of Ethics status for the city.

"The Certified City of Ethics program was established by the Kentucky League of Cities several years ago, creating a model code of ethics for city leaders to follow," his campaign said in a news release. "To earn the designation, city employees must participate in training that stresses the importance of responsible fiscal management and fulfilling the duties of public office with honesty, openness and intergrity."

These are traits that Dieruf argues are "solely lacking" in Louisville Metro Government.

CRAWFORD | On Racing Louisville, failures all around, and heroes in dark places