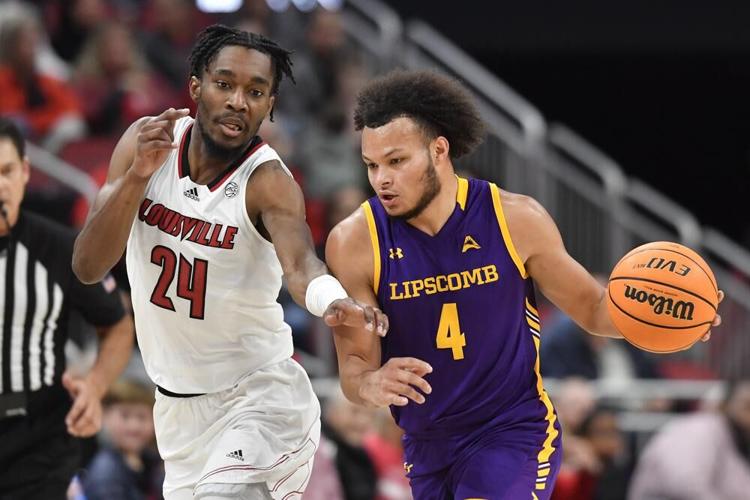 Louisville forward Jae'Lyn Withers (24) attempts to get the ball away from Lipscomb guard Derrin Boyd (4) during the first half of an NCAA college basketball game in Louisville, Ky., Tuesday, Dec. 20, 2022. (AP Photo/Timothy D. Easley) 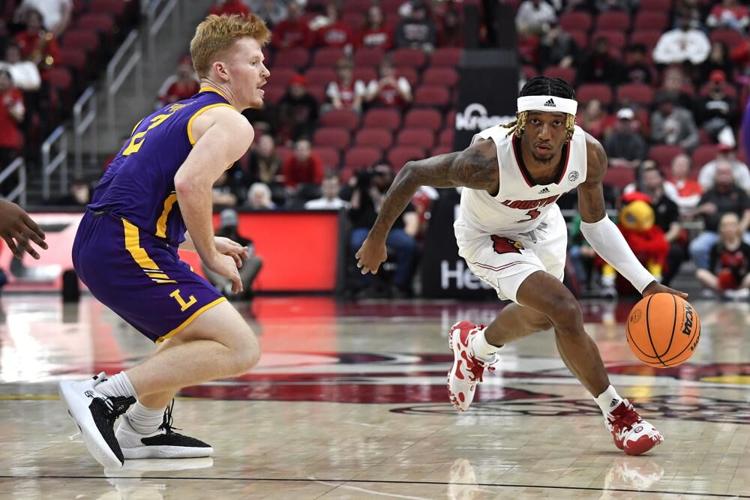 Same old eyebrow-raising predictions that make you wonder somebody slipped more than mango into my smoothie:

The University of Louisville men’s basketball team will win an Atlantic Coast Conference game this week — either Tuesday night against Syracuse or Saturday when Wake Forest visits.

“We know (the Syracuse game) is a game we can win,” Louisville assistant coach Nolan Smith said Monday.

“They’ve a very good team. Well coached. We’re getting ready for that (2-3) zone. But if you look at their roster, their personnel and you look at ours, we feel good.”

I predict an ACC victory this week knowing that the Cardinals have lost their first three ACC games by an average margin of 20.3 points.

I say that knowing the Cardinals have lost their seven games against Power 5 opponents by nearly 24 points.

I say that knowing none of the analytics/power formulas project that Kenny Payne’s first Cardinals team will be favored in another game this season.

(But let the record show that the formulas created by Ken Pomeroy and Bart Torvik have the Cardinals finishing 2-18 in the ACC.)

I predict an ACC win this week knowing that another analytics site — Haslemetrics — shows the Cards as an underdog by 10 points or more for the next seven games.

“We’re still fighting,” U of L forward Jae’Lyn Withers said. “We’re still together. We’re still persevering with everything that’s been going on.”

I say that without having cracked my noggin on my morning walk Monday.

I say that because I believe the Cardinals are improving.

In the first nine games, all losses, Louisville made 37.2% of its field goal attempts.

In its last five games, two victories, three defeats, the Cardinals made 46.8% of their field goal attempts. If the Cards keep shooting close to 47%, they will win more than two more games.

They need to keep getting to the foul line because over the last five games Louisville has made 75.7% of its attempts.

“I think we’ve been better at connecting, making plays, getting in the paint, making extra pass.”

I say that because this team has yet to bag it despite its 2-12 record while swimming in an ocean of negativity.

“No one expected the season to be this way or the way it is,” U of L guard Hercy Miller said. “The only thing that can change that is us just working hard and keeping a positive mindset.”

I say that because of the crazy stuff that I see in college basketball every week.

You say that doesn’t matter. Those are Big Ten programs. You say you want examples from ACC programs.

Pull up a chair. Syracuse, the team that Jim Boeheim, the Hall of Fame coach, will bring to the KFC Yum! Center without his departed sons Tuesday night, has lost home games to Cornell (No. 112 in KenPom) and Bryant (No. 184).

Wake Forest lost to No. 106 Loyola Marymount. In their last two road games, the Demon Deacons were defeated by 20 (Clemson) and by 24 (Rutgers).

It’s not like the Walton Gang or Hoya Paranoia is coming to town.

The Orange have one guy — Joe Girard, a senior guard — who has made 40 of the 84 three-point shots Syracuse has hit this season. As always, the downside of the Boeheim zone is the Orange provide ample opportunities for offensive rebounding.

Wake is not a Top 60 team in offensive or defensive efficiency. The Demon Deacons’ numbers are better on offense than they are on defense.

Make a note of this: In Wake’s four losses, its opponents have averaged making 10 three-point field goals.

Yes, Louisville is an No. 269, an unimaginable 142 spots behind the next worst ACC team (Georgia Tech). But if you’re looking at home games the Cards can steal, the games this week have to be on the list — if you still have a list.

“So we have to come out of the gate with a really good start and attack their zone and get us one here at home.”

Will he be eligible to have a horse in this year's Kentucky Derby?