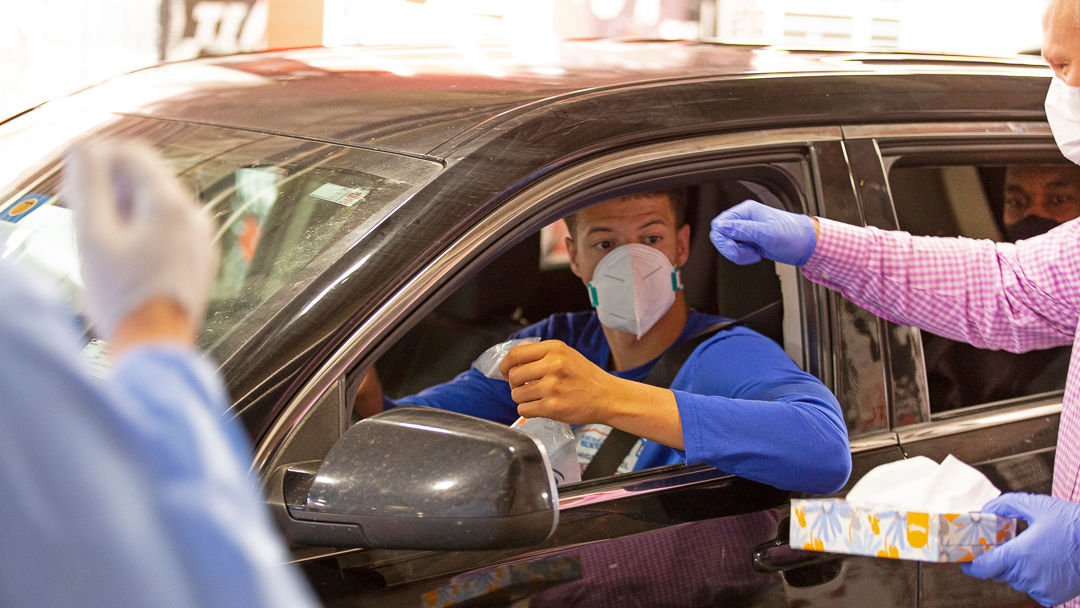 Basketball sophomore Samuell Williamson pulls up for a COVID-19 test. The drive-through testing was administered to about 120 University of Louisville athletes who returned to campus this week.

Basketball sophomore Samuell Williamson pulls up for a COVID-19 test. The drive-through testing was administered to about 120 University of Louisville athletes who returned to campus this week.

LOUISVILLE, Ky. (WDRB) -- The excuse has been written for college basketball players, courtesy of the novel coronavirus.

All they have to do is grab it. You can be certain some will, especially if they fall short next season.

Do not expect to hear that from Samuell Williamson, the sophomore forward on the University of Louisville basketball team. He remains my pick to be the team's improved player during a season when improvement will be self-driven.

"I think I'm doing a great job of improving every single day," he said. "I try to make the most out of every situation.

"And, obviously this is something that nobody wanted … this kind of a situation most athletes don't have a whole lot of resources. But, I feel like this is a time to kind of take my game to another level.

Like all of his teammates except for senior Malik Williams, Williamson has been back at the University of Louisville for several weeks.

With Jordan Nwora pursuing the NBA Draft, opportunity awaits Williamson, who is 6 feet 7 and 200 pounds.

Williamson averaged 4.4 points and 2.5 rebounds while playing less than 16 minutes per game as a freshman. Chances are his minutes will double and his scoring average will grow into double figures.

Remember that he scored 43 points in the first four games last season. He can certainly score.

He said the players work in the weight room in groups of three or four for 45 minutes four days a week. The groups also have another 45 minutes in the gym for skill development.

Pick-up games are played on Mondays, Wednesdays and Fridays.

But before Williamson returned to Louisville from Rockwall, Texas, he said that he, basically, concentrated on the basics of the game.

Dribbling a basketball by himself in his garage. Running in sand to improve his quickness. Jumping rope. Practicing his shooting form.

"Really, just trying to make the most of the situation," Williamson said. "I didn't have a whole lot of weights. I ended up doing a lot of body weight stuff, which I felt was good for me."

Understand one thing: Williamson said that Louisville coach Chris Mack reminded his players they're in the age group that has seen a spike of COVID-19 cases in parts of the country.

Williamson's mother, Sue, is a cancer survivor, in an at-risk group for the virus. Williamson said he stayed home during most of his time in Texas and followed the protocols when he left home.

That will not change at Louisville.

"It is definitely something that I took serious from day one," he said. "As soon as the ACC tournament got canceled (on March 12) and then (NBA) guys like Donovan Mitchell and Rudy Gobert tested positive I think it just kind of became real for everybody.

"At that point of it, 'OK, this is something serious and something we all need to take seriously.'"

Do the players discuss the virus and its potential to impact the team and the season?

"Quite a bit, I would say," he said. "Definitely something that's always in the back of our head when we're just around or go get something to eat.

"It's something we have to be careful of. It's just been a new way of life the last three months and we can't become careless about the virus."