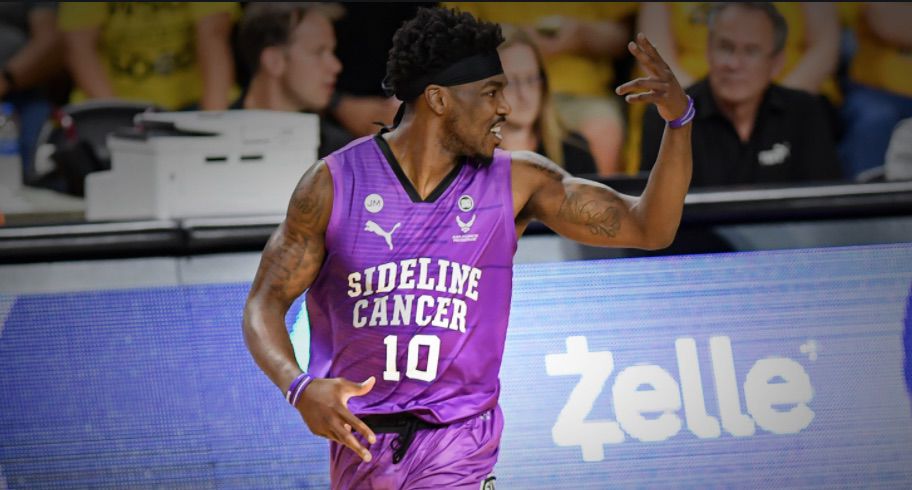 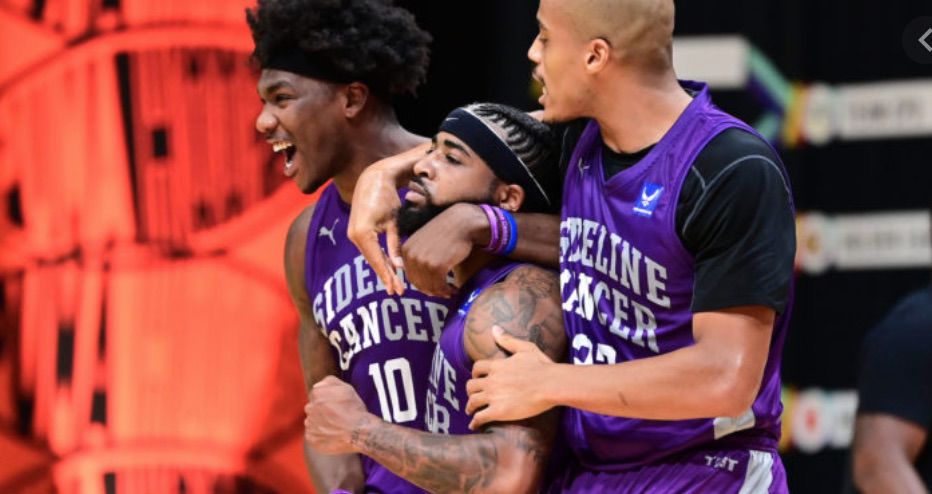 Remy Abell (far left) hit the game-ending shot for Sideline Cancer in their second game in The Basketball Tournament.

Remy Abell (far left) hit the game-ending shot for Sideline Cancer in their second game in The Basketball Tournament.

He will pack his travel bag — clothes, toiletries, Xbox, everything — and carry it to the lobby of the Hyatt Regency Hotel in downtown Columbus, Ohio.

Abell will leave the bag with officials of The Basketball Tournament. He will walk across the street to Nationwide Arena and join his teammates, including former Indiana University guard Maurice Creek.

Then Abell, Creek and Sideline Cancer will try to defeat Boeheim’s Army in the quarterfinals of the TBT.

If they win, Abell will return to the Hyatt, reclaim his bag and check back into his room. Abell and Sideline Cancer would need two more victories to claim the $1 million winner-take-all prize, starting with a semifinal game Sunday.

If Sideline Cancer loses, Abell will reclaim his bag and not be allowed back into the Hyatt. He will drive home to Louisville, where he once starred in the Seventh Region for Eastern High School before he played two years for Tom Crean at Indiana and two seasons for Chris Mack at Xavier.

Or Abell might spend Saturday night at the another hotel, the losers’ hotel, for players no longer allowed inside the tournament bubble.

"It’s a little strange but it’s been great, actually," Abell said. "I’ve felt safe the whole time. You can walk around the hotel, but you have to wear a mask.

"There’s great sportsmanship in the TBT. Everybody’s been friendly. I just wanted to get back to playing basketball. It’s the only basketball on.

"The TBT has done an amazing job of putting this tournament together. I think the NBA and other sports are watching what the TBT has done to keep people safe."

As the list of sports cancellations grows and the mystery about the future of the 2020 college football season intensifies, The Basketball Tournament has shown what can be done in an intensely controlled environment.

Players who have tested positive for the novel coronavirus, COVID-19, and been removed from competition with their teams.

But Abell said the testing has been consistent and easy. The bubble has been maintained.

"You’re tested every morning," he said. "It’s a spit test. It takes you a few minutes to fill it, you put the top back on and they send it off to the lab."

As for the hotel? Abell said that players have been advised they are out of the tournament if they leave the hotel or are spotted anywhere in the Hyatt without their masks.

"If you leave the hotel for any reason, you’re disqualified," he said.

Breakfast, lunch and dinner are provided and must be eaten in your room or designated areas. If you don’t like the menu or want a snack, you can call a delivery service.

Players are allowed in common areas, like the lobby or conference rooms, but not in the rooms of other players. No friends or family members are allowed at the hotel or games.

These are guys conditioned to playing in raucous college environments, NCAA Tournament veterans, a few guys with NBA experience. Former Louisville guard Ryan McMahon scored 16 points for Red Scare, which advanced to the semifinals Friday. There are about 20,000 empty seats.

"You get used to it," Abell said "It’s not bad. There’s plenty of energy in the building. You’re playing for a $1 million.

Don’t forget the $1 million. With eight teammates, two coaches and a team organizer, Abell’s cut will be about $75,000 if Sideline Cancer wins because the players also committed to a donation to fight pancreatic cancer.

Still, winning exceeds losing because the players from the 23 losing teams will leave with checks for $0.00.

We here!!! @SidelineTBT Great team win today. On to the next 🙏🏾🙌🏾💯💜 pic.twitter.com/MUnoYDSSr1

Abell will turn 28 next month. He’s played four seasons of professional basketball in Europe — the first two in Finland, the last two in Hungary. He has a contract for the 2020-21 season with Oroszlany in the top Hungarian league.

Abell has been terrific in The Basketball Tournament, scoring 17 points in both games, including the game-ending 3-point shot against Team Challenge on Tuesday.

Abell’s team started the tournament seeded No. 22. They have defeated the squads seeded No. 11 and No. 6. Boeheim’s Army is the No. 3 seed. The game will be televised at 4 p.m. on ESPN.

Several players on Boeheim’s Army played on the Syracuse team that upset an Indiana team that was a No. 1 seed in the 2013 NCAA Tournament. Abell and Creek have not forgotten.

"Mo talked about that," Abell said. "He said he’s ready for this game. I guess you could say it would be payback."

Win, and Abell will claim his bag, check back into his hotel and rest for a semifinal game Sunday.

Lose and Abell will pick up his bag outside the Hyatt ... well, you know.