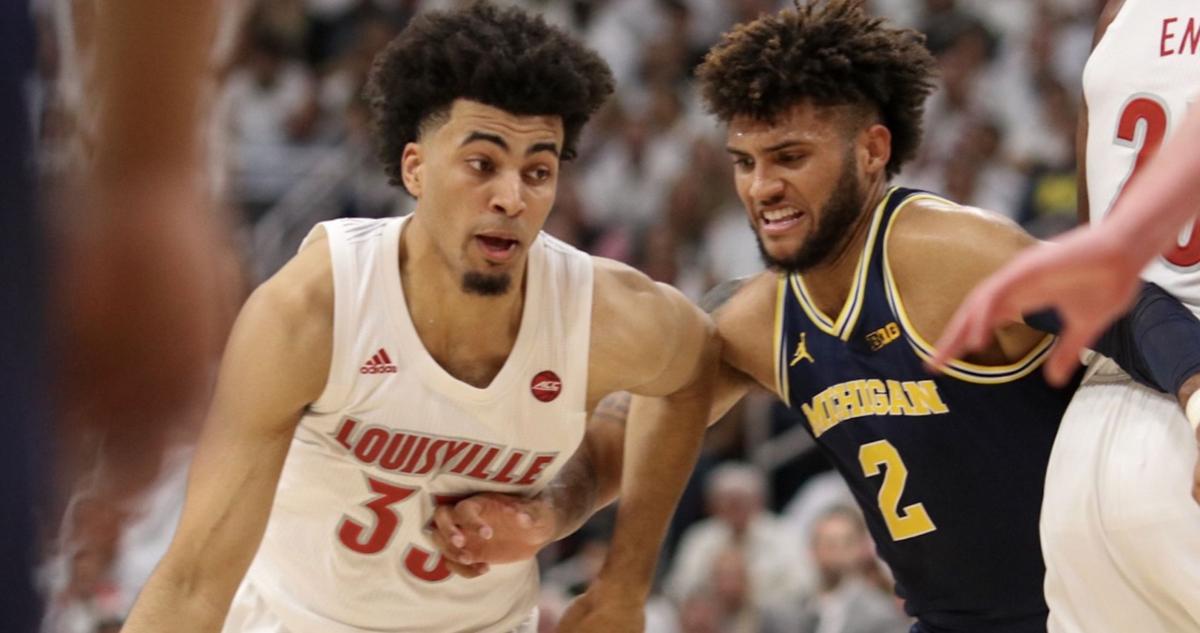 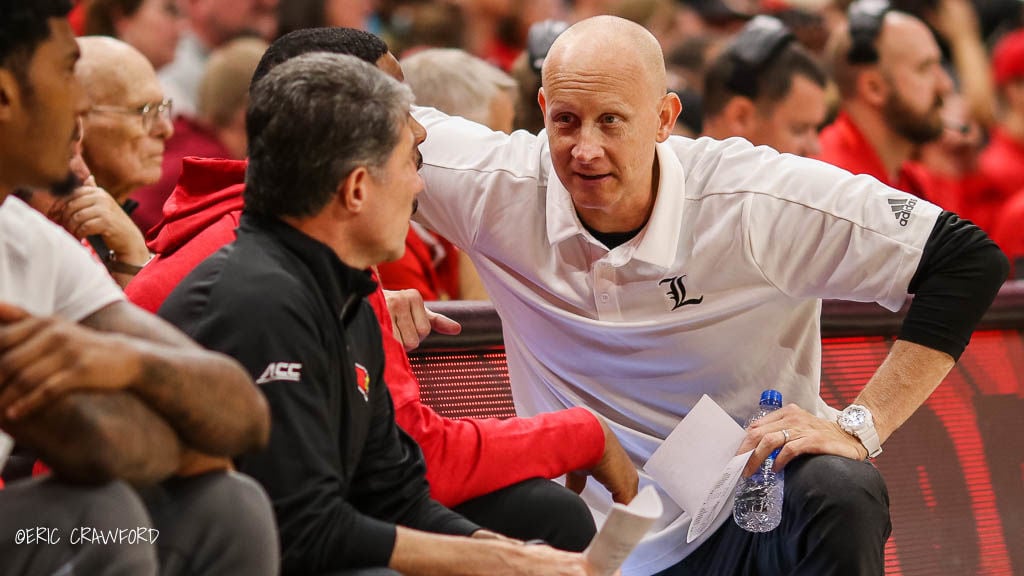 LOUISVILLE, Ky. (WDRB) -- In a season of raging unpredictability, Louisville and Michigan followed the script of strangeness Tuesday night at the KFC Yum! Center.

Two of the finest offensive teams in the country moved into the center ring and delivered more slugfest than shootout.

Defense ruled with authority. Nothing came easy, especially baskets for Michigan in Louisville's 58-43 win. On a night when the program celebrated its No. 1 ranking as well as the Most Outstanding Players from three NCAA Final Fours, Louisville performed like a group that is serious about what is required to win in March.

"We might not have been perfect (on defense) but we were damn close," U of L coach Chris Mack said.

Two teams that roared into the top five of the national rankings by averaging more than 80 points per game huffed and puffed to get to 50.

Actually, one huffed and puffed to get to 40. The Wolverines missed nearly 75% of their shots. Truth: Michigan made 25.9 percent of its shots, less than half of its season percentage.

Credit Louisville. The Cards played the kind of defense that would make Nick Saban smile. Louisville finally moved to the top spot in Ken Pomeroy's computer power rankings. They're fourth in the nation in defensive efficiency and third on the offensive end.

Jordan Nwora, as usual, led the Cardinals with 22 points, making nine of 23 shots. Mack asked Nwora to be stronger on the glass this season. He was, contributing a dozen rebounds. Steven Enoch added 10 points and 10 rebounds.

Do not forget Dwayne Sutton. He grabbed 11 boards, giving the Cardinals three double digit rebounders. There were plenty of rebounds to collect on a night when the teams combined to miss 81 shots. I told you it was a slugfest.

Delivering a double-double was not all that Nwora did. He also delivered a message after the game. On Monday word crackled across social media from the Michigan players to the Louisville players that the Wolverines intended come to town and continue their ascent in the national rankings.

"We had heard they wanted some smoke yesterday," Nwora said. "So they got some smoke. And they got smoked."

"That's what happens," Nwora said. "They were talking. We were able to quiet it up a little bit. Now we've just got to focus on the next game."

Make it Cardinals by 15 in the signature game of the ACC/Big Ten Challenge, matching the nation’s top-ranked team against a Michigan team that surged for No. 4 in the AP poll after winning its first seven games.

And make a note that if Louisville can back this up with another win in their ACC home opener against Pittsburgh on Friday night, the Cardinals will become only the second team to hold the nation’s No. 1 ranking for more than a week.

Defense dictated that. The Wolverines had scored at least 70 points in every game until Tuesday.

Michigan had made more than 42% of its shots from distance, more than 10 per game. Michigan attempted 19 threes. The Wolverines made three. In the last two games, Louisville's opponents have missed 32 of 36 three-point attempts.

This is how good Louisville’s defense was against the formerly unbeaten Wolverines. For the first 15 minutes, one Michigan player scored a field goal. That was mammoth center Jon Teske who clanged and banged his way to four baskets.

The Wolverines missed their first five.

Michigan did not make consecutive shots for nearly the first 18 minutes. They looked like the team that started the season unranked, with a string of questions about how effectively they would attack without their marvelous head coach John Beilein, who jumped to the Cleveland Cavaliers.

That could not continue for another 20 minutes. Eventually, the Michigan team that blitzed North Carolina and Gonzaga in The Bahamas last week showed up.

In the second half, Michigan made three of its first five shots. After trailing by 15, the Wolverines reduced the deficit to 30-26 after Teske made a pair of free throws. Then Louisville made the Wolverines play the game the way the Cardinals were determined to play the game — with grit, toughness and force.

Michigan missed its next four shots and turned the ball over twice. Louisville stretched its advantage to 40-26, and the ACC rolled toward its second win in this challenge. The scorecard is split 4-4 with six games to play Wednesday.

Michigan simply could not make enough shots to make a sustained run. They never got closer than 10.

If Louisville defends against everybody the way they defended against Michigan the Cardinals should stay atop the polls for awhile.