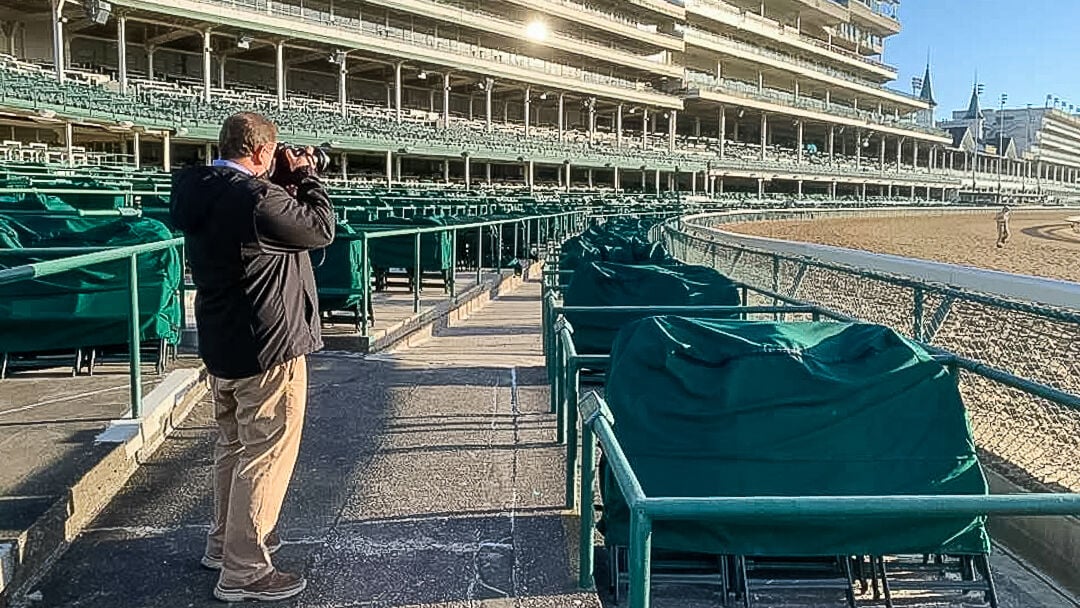 Eric Crawford takes an image a track worker in front of an empty Churchill Downs grandstand on Kentucky Derby morning. 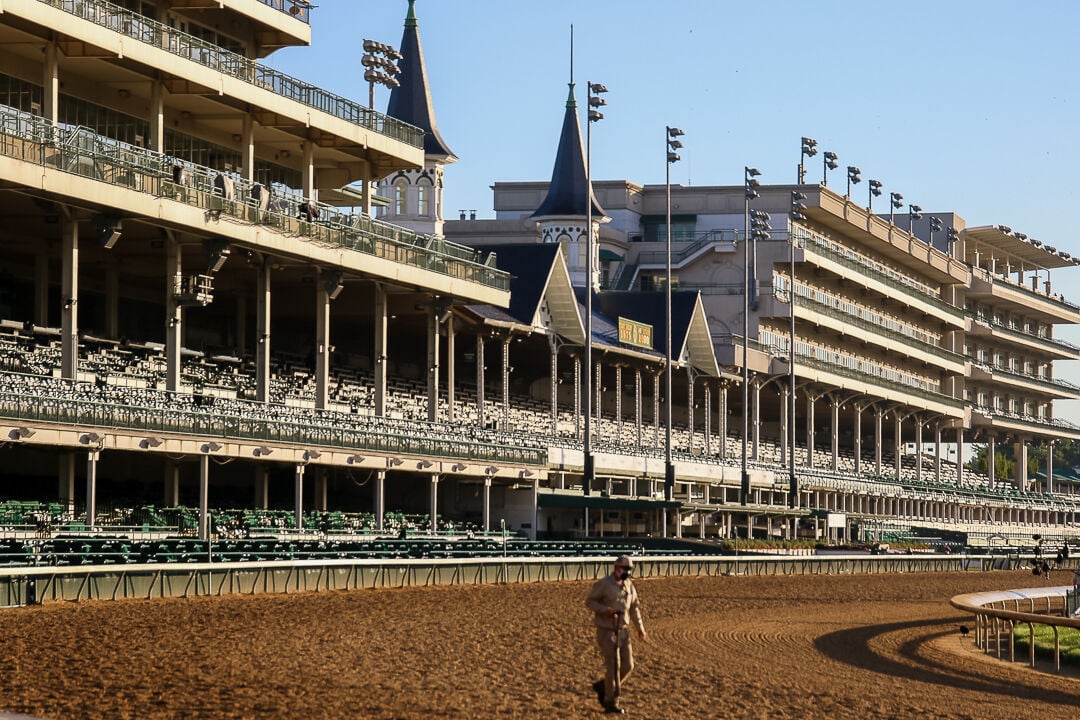 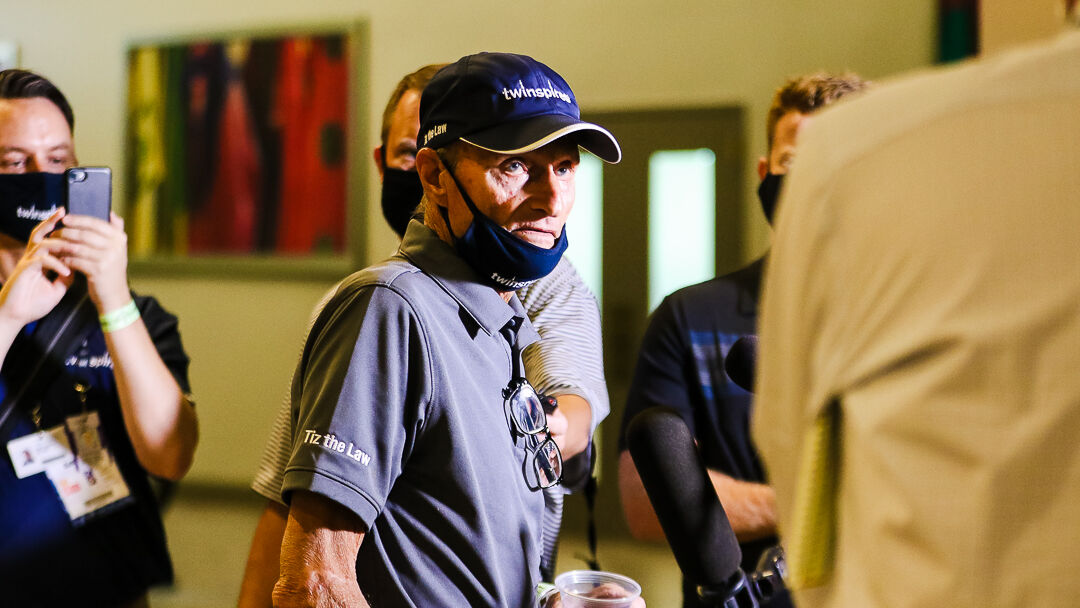 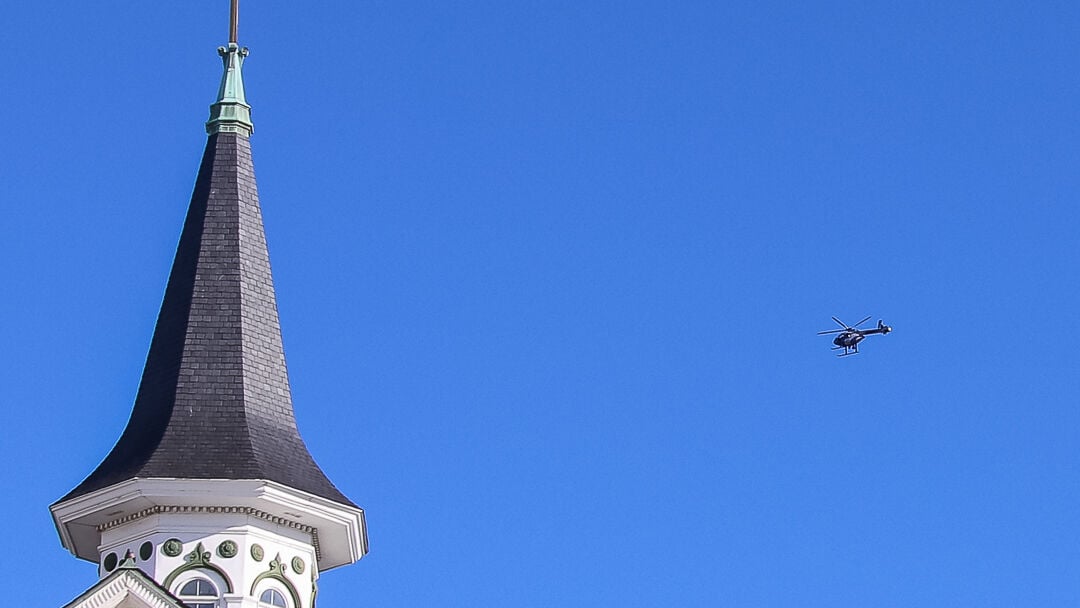 A police helicopter hovers above the proceedings just before the Kentucky Derby on Sept. 5, 2020. 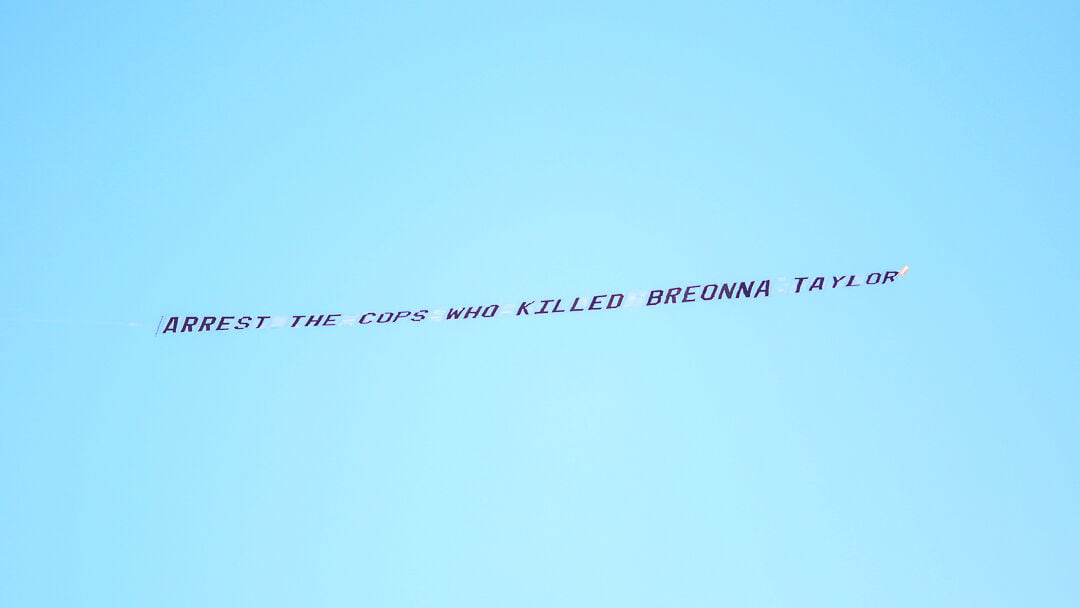 A biplane carried the message from protestors outside the gates to those inside Churchill Downs on Kentucky Derby Day 2020. 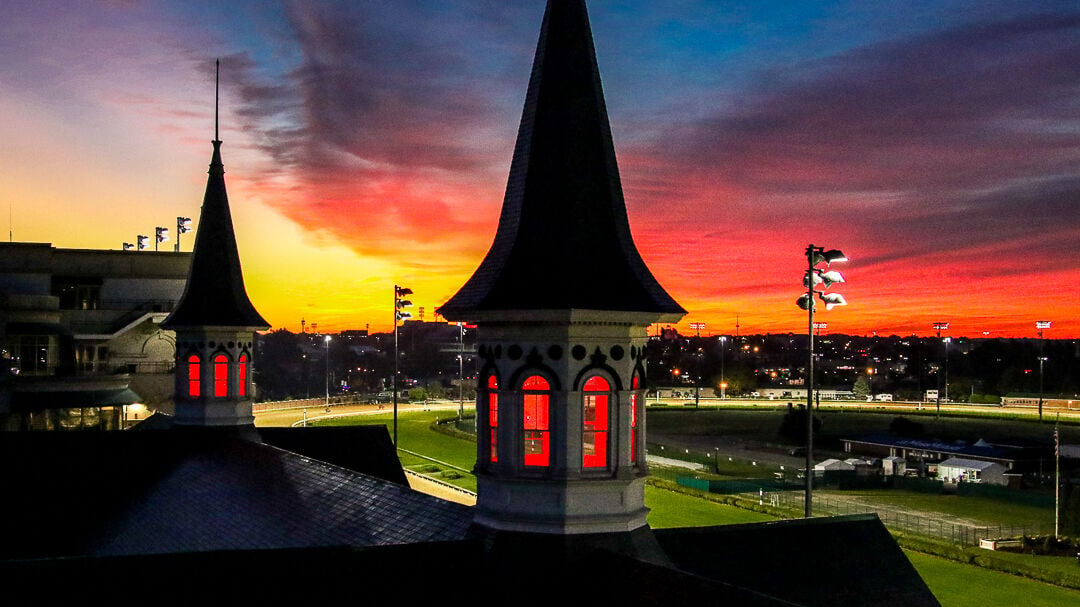 The sunrise over Churchill Downs on Kentucky Derby morning, Sept. 5, 2020. 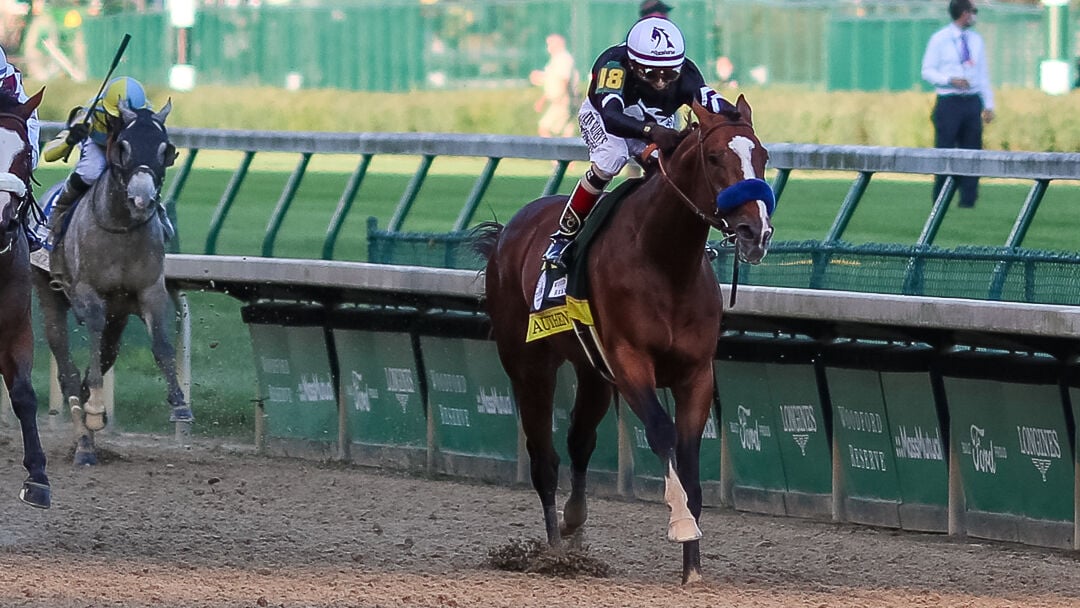 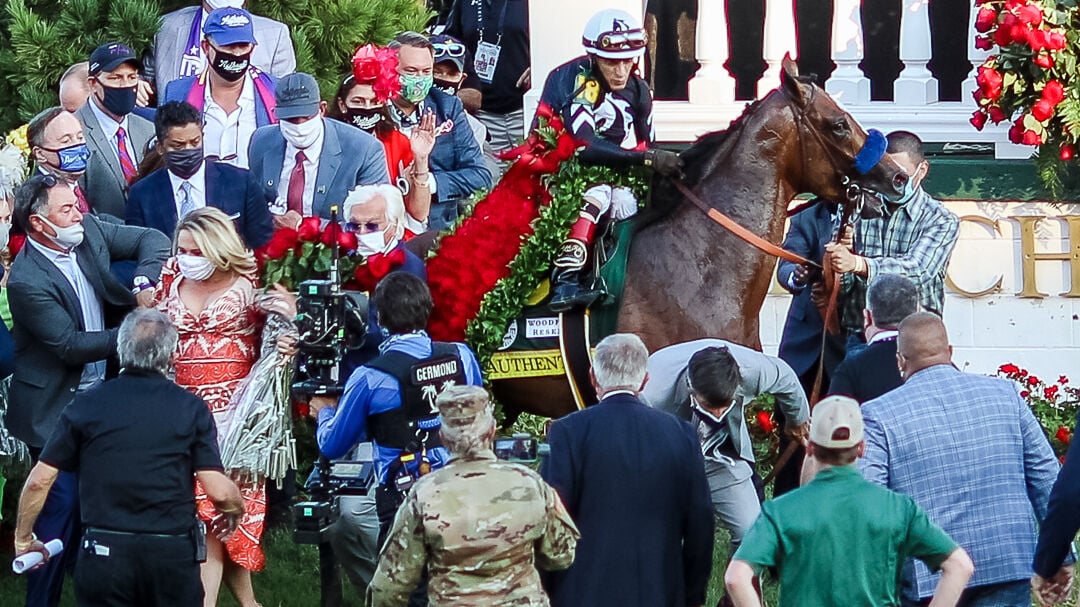 Authentic spins around and knocks down several -- including his trainer, Bob Baffert - in the winner's circle after winning the 146th Kentucky Derby.

LOUISVILLE, Ky. (WDRB) -- The Kentucky Derby has come and gone, peacefully, thankfully. For a reporter, the Derby is stressful. There are crowds to navigate. There are early mornings and late nights and little sleep. There are stories upon stories.

This year, everything was different. Everything. There were no crowds, but there was a different kind of stress.

If you're a Kentucky Derby regular or sometime attendee, know this about the first September running of the Run For the Roses: You were missed. It wasn't the same. This was a disorienting Derby, and not just because of the calendar.

My job this past week was to try to balance writing about the scene with taking a few pictures to capture the scene. So, by way of wrap-up, here are some my memories from the week, with a few words to go along with them.

(A note: My vantage point was inside the Churchill Downs gates. Images of the protests outside fell to others.)

That was one of the tasks everyone felt, and a great many did a fantastic job. (I don't know if you can capture it any better than Matt Stone of The Courier-Journal, who shot Derby winner Authentic making the traditional walk the length of the grandstand after his victory, with no fans in the picture).

For photo purposes, the task was made easier by the emptiness. Forget about planting yourself in the dirt along the rail. I stood outside the rail and was able to get into multiple positions for the race itself. In the end, the best I could do was this photo from Derby morning, with the sun shining bright, but no crowds on the way.

The comment, coming from the trainer of the even-money Kentucky Derby favorite, in front of a dozen cameras, could not be ignored.

There were many who were mad at me for not denouncing the comments more. I was writing a news story, and felt it important just to present what was said so that people could hear it accurately and in its entirety for themselves.

The comments illustrated the difficulty that horse racing faces as it looks to recover from a racist past and involve more Blacks in the sport. Old attitudes are ingrained.

It was hard to keep from looking up. Even as the Kentucky Derby horses made their way across the track from the barn area without fanfare, and their owners and trainers largely without a word. It was a nervous procession, and always is, but there was less magic about it. The anticipation was all wrong, with no grandstand full of people at the end of the walk.

The sky, however, was a flurry of activity. At one point, I counted six helicopters, two biplanes (one pulling the message, "Arrest the cops who killed Breonna Taylor,") and a UPS jet.

Protesters had threatened to make a disruptive noise before or during the race, and Churchill was ready with its own piped in crowd noise had that become a necessity, but in the end, the most intrusive noise came from above.

(A quick aside: Churchill Downs officials deserve credit for pulling off a smooth Oaks-Derby weekend despite the many obstacles and security concerns, and security forces from Louisville Metro police to state police to national guard to Homeland Security and others deserve credit for making the event secure. And, of course, credit to the various protesting groups and their leadership on the ground, for keeping the protests peaceful.)

The best moment of the day probably came early. WDRB's Tom Lane and I were providing Derby morning reports from the track, and I dragged Tom up to a fifth floor balcony so we could get a TV shot with the Twin Spires in the background. What we wound up seeing was a remarkably splendid sunrise, with colors you wouldn't believe.

That was the most normal-feeling Derby day moment, during a time when the track would be empty anyway, horses training below, and the show going on -- as beautifully as I've ever seen it -- in the sky above.

It has been a trying year for trainer Bob Baffert. He has been suspended and had a couple of horses disqualified for illegal substances in Arkansas. His Triple Crown winner, Justify, remains under a cloud of suspicion for substances detected during his 2018 run. He had a couple of top contenders this year sidelined by injury.

Before the race, one of his contenders, Thousand Words, got upset in the paddock, reared back, fell backwards, threw his riders and broke the wrist of assistant trainer Jimmy Barnes in eight places. The last I remember seeing of Baffert before he headed to the track for the Derby was asking Barnes, "Are you all right," and then reacting in disgust at the turn of events.

The next thing I knew, his other entry Authentic, was winning the race and giving Baffert his record tying sixth Kentucky Derby victory.

After the race, Baffert tried to sum it all up, the race, the virus, the scene, everything:

"We were lucky to even be racing in California," he said, referring to the state's COVID-19 issues. "So when we got here, it's you see the city is just completely how quiet. This is the time where the city where everybody is just flourishing and waiting for the Derby. It's just very I feel bad for everybody. There's a lot of frustration going on here. Supposed to be fun. I feel their pain. I feel for them. That's why it's really hard. I know we won the Derby and all that, but there's a lot of people out there that are just suffering and all that. So that's why it's very humbling for me to win this race during this time because, you know, America, it's just crazy out there. Every day we wake up, I'm like everybody else: Is this really happening?

"And I love to be up here pounding my chest because I won six, but I feel for everybody in the city because this is this is where everybody has a chance to this is supposed to be a happy time, the Derby, especially in Louisville and it's not. So it's sort of a very strange, weird feeling."

It surely is. The scene of the chaotic winner's circle, with Authentic swirling around and knocking people over, is probably as appropriate a way to finish this as any. Here's to doing it again in the spring, and doing it even better.