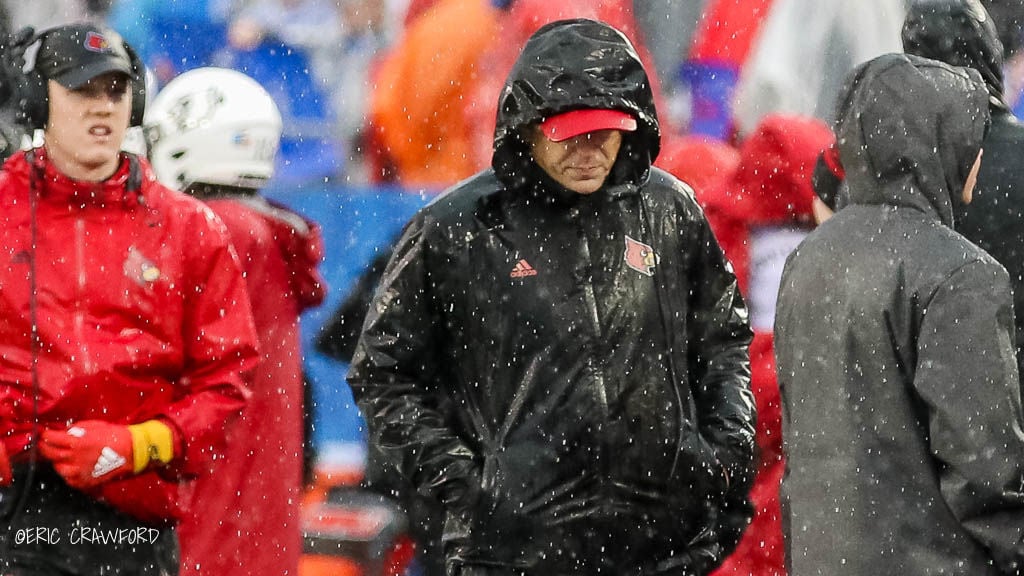 Louisville coach Scott Satterfield during the first half of Louisville's loss at Kentucky. 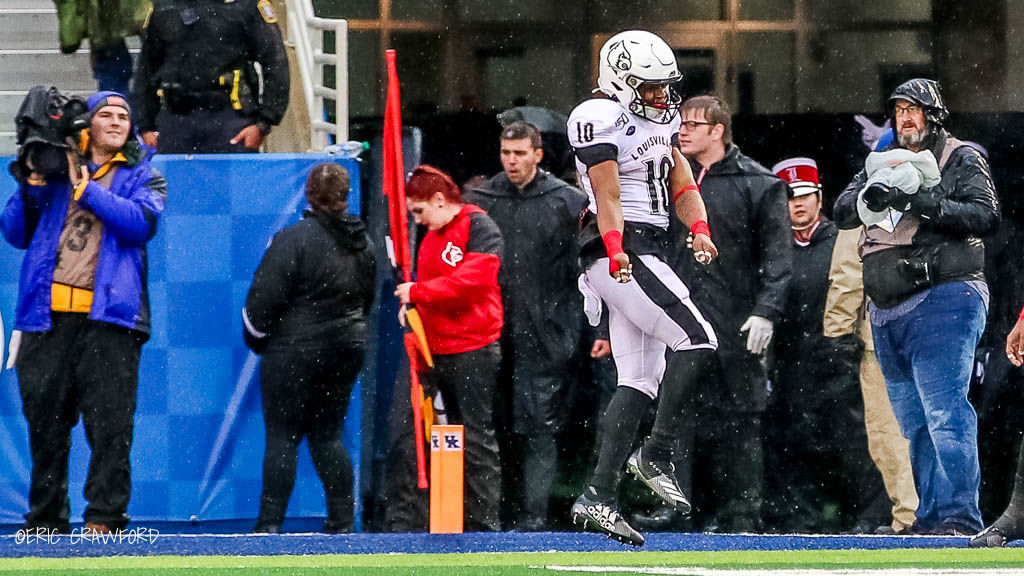 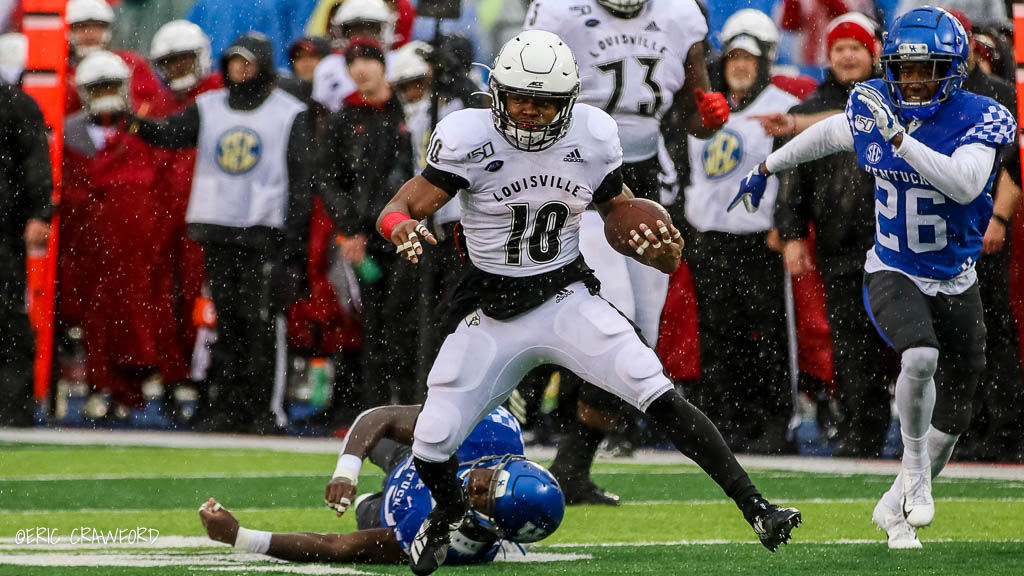 Louisville's Javian Hawkins gets loose in the first quarter at Kentucky. 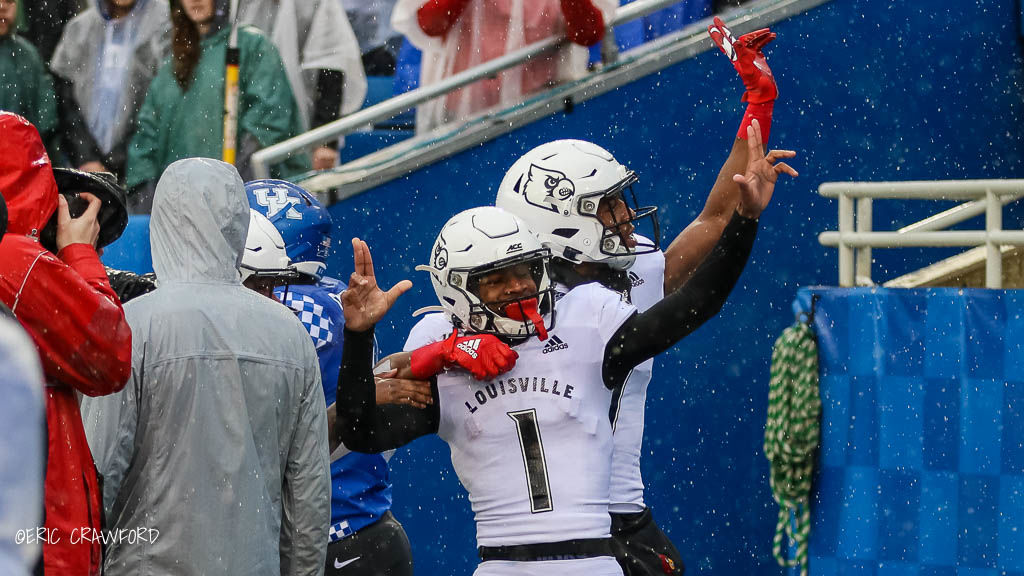 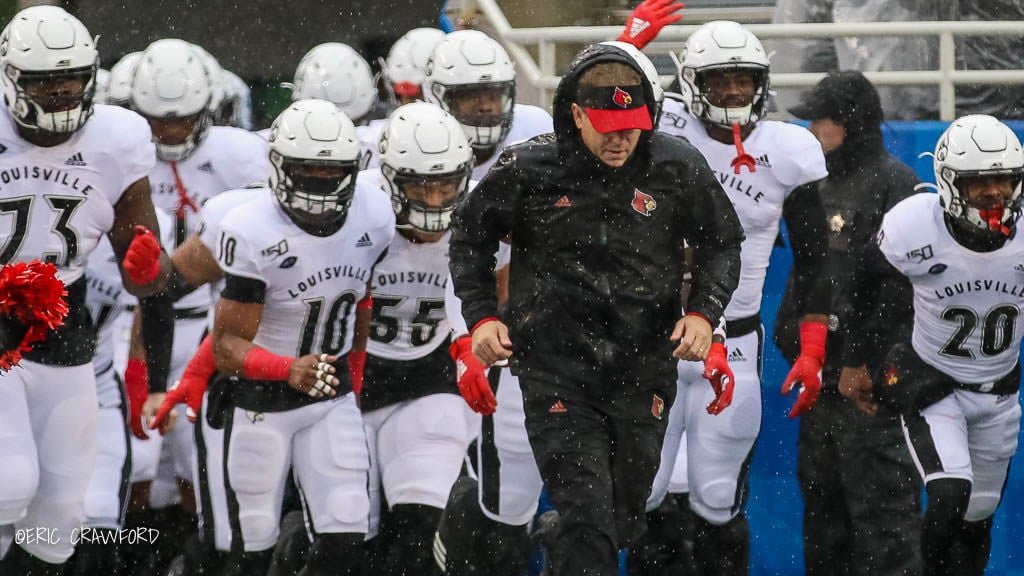 Louisville coach Scott Satterfield during the first half of Louisville's loss at Kentucky.

Louisville's Javian Hawkins gets loose in the first quarter at Kentucky.

LEXINGTON, Ky. (WDRB) – Football is a game of size, speed and numbers. You might get away with not having one of those, but if you’re outgunned in all three, you have a problem.

Saturday in Kroger Field, the Louisville football team had a problem. This is a Louisville team that has overachieved all season. It is a team that has been brilliantly coached, and has been marked by character, resilience and effort. It has not been a team long on talent. It has some talented players, but not a roster full of them. That’s just how it is.

“Man, just a tough day for the red team out there today,” Louisville coach Scott Satterfield said. “I think the first half, our guys battled well. . . . Second half, just could never get anything going, and just kind of got wore down, really. Bottom line, got worn down by their offensive line and defensive line, quite frankly. I think they dominated the line of scrimmage in the second half and I think that was obviously the difference in the game.”

And before someone stops me and reminds me that this Kentucky team probably isn’t one that should be mentioned in the same breath as teams like Notre Dame and Clemson, I agree.  It’s a team that hadn’t beaten an FBS team with a winning record until it beat Louisville on Saturday.

So Kentucky is what it is, a team making the best of its situation, and making it better every week, in fact. Louisville defensive lineman G.G. Robinson said of UK’s offensive front, “They’re up there with the best (offensive) lines we’ve played all season.”

Louisville offensive lineman Mekhi Becton said of the defensive front: “Those guys are really big and good players. We couldn’t cut the back side off and that’s what hurt us. Their nose guard was making a whole lot of trouble this game. I feel like that affected us the most.”

The Cardinals moved the ball to start the game. But as it wore on, they simply wore down. Satterfield faked a punt in the first half, and that cost the Cards a field goal. The defense was respectable in the first half, and Stoops seemed strangely conservative, until he went for it on first down late in the half, and Louisville got the stop, then scored two plays later to go in down just 17-13 at the break.

But Louisville wouldn’t score again, and things would get out of hand quickly, as Kentucky QB Lynn Bowden ran wild in the second half, finishing with 234 yards and four touchdowns on the ground.

“He’s a good athlete, a good player,” Satterfield said. “I think for them, it starts up front. Their offensive line is very, very good, solid, one of the better lines we faced all year. They work well together. They’re big. They’re strong. Then what it ends up doing is putting one guy on the quarterback. He was able to get away several times today.”

Louisville linebacker Dorian Etheridge said of Bowden, “You just have to give credit to them. They have a really good running game. They blocked extremely well and we didn’t tackle well. … (Bowden) is extremely slippery. He’s just one of those guys that you have to wrap up … and we didn’t do a good job of that today.”

Louisville got 142 yards rushing and a 6.5-yard average from Javian Hawkins, a bright spot. The freshman notched his seventh 100-yard rushing game on the season, tied for third-most ever by a Cardinal. The first two spots are held by a guy named Lamar Jackson. He ends the regular season with 1,420 yards, fourth-best ever at U of L.

After the game, Satterfield chatted with Stoops briefly, and appeared to talk a bit about the L’s Down gesture. Stoops wouldn’t elaborate on the talk after the game, though he did say his program respects Louisville and that Satterfield is “a good man and a good coach.”

“I don’t know if an L’s Down is going to offend them,” Stoops said. “There’s going to be a lot worse in this rivalry over time.”

There are two ways to look at this. One, is that in the current climate of respecting others and not denigrating entire cities full of people, you don’t want to do that kind of thing. Clearly, it is endorsed by UK’s coaches and administration.

My own view is, it’s a rivalry. It’s one of those things. And if you don’t like it, your option is to win the game. WKU fans were flashing L’s down at the beginning of Friday’s basketball game with Louisville in Nashville. After a double-digit loss, I didn’t see any.

I know in say, the Big 12, for example, officials will throw a penalty for an unsportsmanlike taunting penalty if a “horns down” sign is directed at Texas players or coaches.

It all seems a bit silly. To me, it’s distasteful. If one side has to denigrate the other to enjoy a win, it’s a shame. But historically, that’s part of the fun of winning, and I do understand that, and I see it on both sides. Nobody, anywhere, has a monopoly on it.

In the end, the best way to stop it is to win.

For Satterfield and the Cardinals, a 7-5 regular season record is an amazing accomplishment. A 5-3 mark in the ACC and a bowl destination is better than 90 percent of the nation expected. That was Satterfield’s message to his team afterward.

“I told our players that one game doesn’t define us for the season,” he said. “We’ve had a very solid year. We’ve grown a lot from January to right now. But I told them, when you go through tough times, you go through adversity like this, you’ve got to learn from it. You have to taste it in your mouth. You have to carry that on, particularly these young guys who are coming back as we go through the offseason . . . and let it propel you to work harder. . . . You know I hate this for the seniors, to go out like this against this team. But for the young guys, you have to learn from it and grow.”