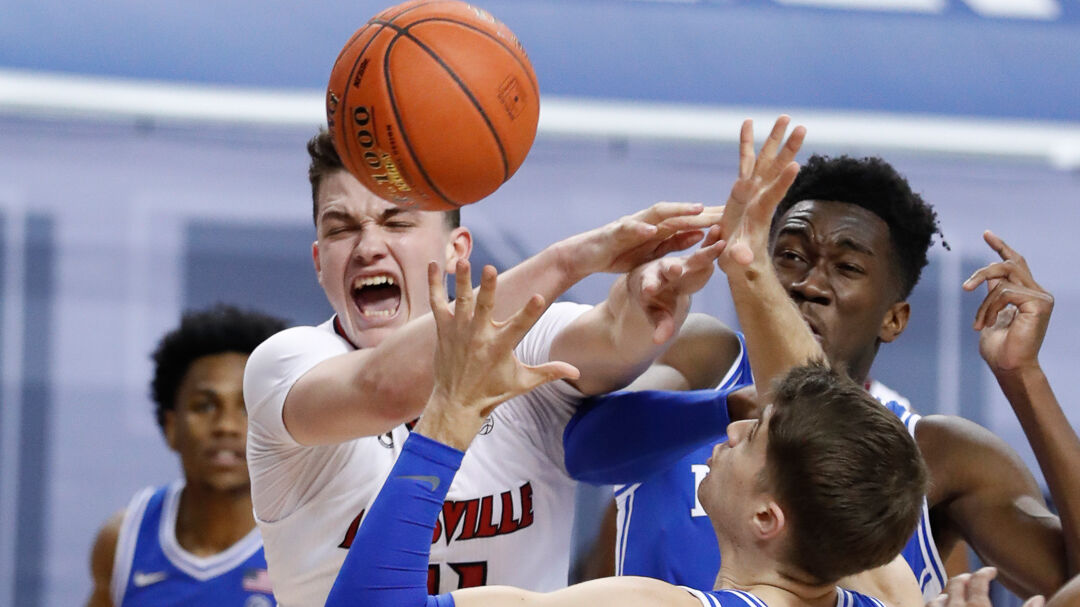 Louisville's Quinn Slazinski (11) and Duke’s Mark Williams (15) and Joey Baker (13) go the rebound during the first half of Duke’s game against Louisville in the second round of the ACC Men’s Basketball Tournament in Greensboro, N.C., Wednesday, March 10, 2021. 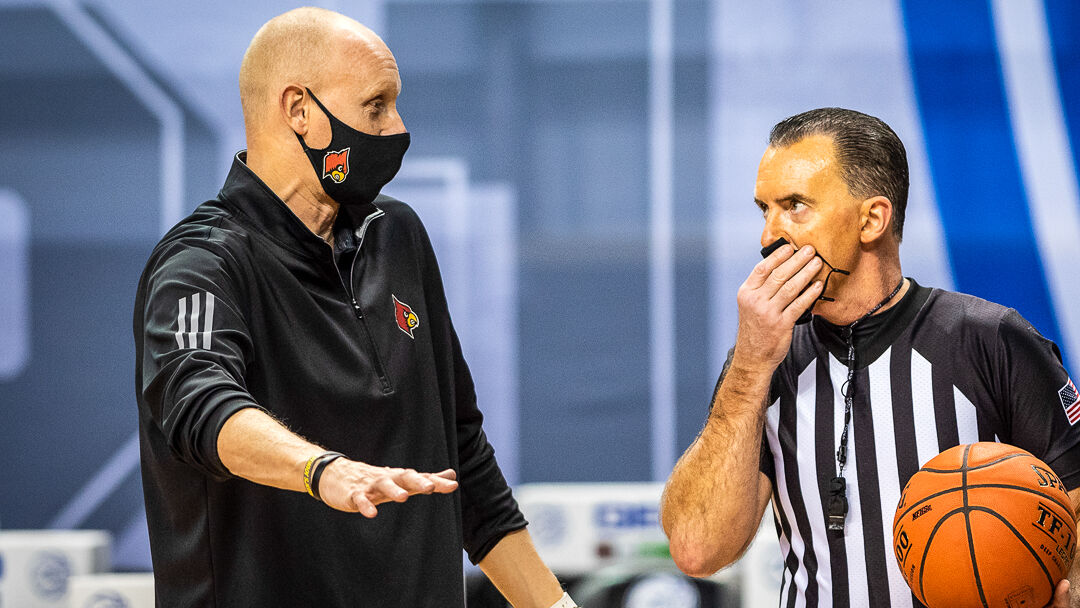 Louisville's Quinn Slazinski (11) and Duke’s Mark Williams (15) and Joey Baker (13) go the rebound during the first half of Duke’s game against Louisville in the second round of the ACC Men’s Basketball Tournament in Greensboro, N.C., Wednesday, March 10, 2021.

LOUISVILLE, Ky. (WDRB) – Louisville is not a happy place right now. Seldom is, when the University of Louisville men’s basketball team is losing. Not when the Cardinals are done with conference tournament play before the fanbase can even get the beers properly iced down. Not when, seven years into their ACC residence, the Cardinals have played only seven games and won only two in the league’s postseason event.

Duke dumped the Cardinals from the ACC Tournament on Wednesday, 70-56. And it wasn’t the kind of loss that sits well. It wasn’t a case of great execution and tremendous intensity giving way to an exemplary effort by an opponent.

Sure, Duke was really good. Freshman Mark Williams looked like Ralph Sampson (actually one rebound better than Ralph Sampson’s freshman tournament record), scoring 23 points and pulling down 19 rebounds. But Louisville, outside of one stretch late in the first half, never really fired.

The Cardinals got no closer than 8 points after Duke opened the second half with a 9-0 run. That’s about all you need to know about the game. Louisville got plenty of good looks. It couldn’t make them. It scored on 39% of its possessions. Duke scored on 53% of its possessions. Louisville went 6 for 17 on layups and dunks. You’re not going to win doing that. On the season, Louisville has made 63% of its shots at the rim. If you’re a team that doesn’t shoot the 3 all that well, that percentage isn’t going to be good enough.

At the beginning of the season, I didn’t expect a great deal from this team. They were, in my opinion, not as talented a team as Chris Mack had a season ago. They lacked the all-around scoring ability of Jordan Nwora, the interior consistency of Steven Enoch, the toughness of Dwayne Sutton and the outside shooting of Ryan McMahon. Once Malik Williams was hurt, they lost his defensive tenacity and leadership.

But then the season started, and these guys played really well. They played within themselves. Freshmen Dre Davis and J.J. Traynor were solid. Carlik Jones was a revelation. Before they went on a 19-day coronavirus pause, they were a top-25 team and playing like it.

Once they came back, they never really did again.

The fanbase is beginning to show signs of frustration. All of a sudden, many are dissatisfied with Louisville’s style of play (roughly 62 possessions per game, 301st nationally). They are less than excited by the pedestrian pace and even less by the results.

This team, as difficult a time as it has had, should be better. I think Mack himself thinks this group should be better than it is playing. He seemed like a coach searching for answers when asked about his team’s spirited run to cut its halftime deficit to 1 point, followed by a lackadaisical open to the second half, when Duke immediately sprinted back out by 10.

"Really, really frustrating to pinpoint," Mack said. "I don’t know if we could’ve had a more singular message than just that at halftime — to make sure that the first four minutes of the second half had the same spirit and same energy that crawled us back into that game. And to not have that, I’ve got some really young guys that have not been through the battles that just absolutely learned the hard way. Because that’s really all our message was about. We talked a little bit about them switching some things defensively, but the majority of it is that we need to get in stances and battle like we did the last five or six minutes of the half. Whether it was our errors on the offensive end, we just did not have that same spirit to start the half, and it’s really, really disappointing."

A couple of things. First, those dissatisfied with Mack certainly have a right. That’s what happens when you don’t win. Fans aren’t happy. Mack is now 13-16 in February and March at Louisville. At the same time, many of these fans are the same people that wanted Mack to the exclusion of anyone else even being considered. (I can’t tell you how many people accused me of having an agenda against the program or of possessing a "crack pipe," I believe it was, for suggesting otherwise.)

Mack’s style was well known when he came here. He wanted to establish mental and physical toughness, rebounding, defensive tenacity and a hard-nosed attitude. That those very things, in significant stretches, are lacking at the moment, is a source of great frustration.

This was not any longer going to be a running, pressing program. That’s not what he does. But the offense this season has been particularly ponderous since the return from the first COVID break.

When Jay Bilas at the end of the game said, "It’s unusual to see Louisville struggle to score like this," at least it provided Louisville fans some comic relief.

Here’s the worry. Louisville has lost its links to past success. It no longer carries the cache it once did. Louisville coming to town isn’t a date to circle anymore, post-Rick Pitino. Fans don’t show up an hour before the game to heckle anyone with a scrap of red on.

In fact, selling a blue-collar style in the sea of red may have been a difficult proposition to begin with.

But all of these things, everybody knew going in. They knew recruiting would be difficult, but Mack has been able to get players. They knew that the rebuild would take a few years, and it will. They know that the NCAA hammer remains over the program, and it does. One of the more troubling thoughts is that a lot of the young players who are paying their dues right now might not get to play in the NCAA Tournament next season if the infractions process is concluded and additional penalties are assessed.

And from Mack’s standpoint, he’s been who he said he was going to be. He’s built the kind of team he proposed to build. And even if it hasn’t performed as well as he or fans would’ve hoped, it’s been a messed-up season anyway — with some significant injuries, and significant road blocks.

Having said that — they’d all be well-served by getting their act together and winning at least one NCAA Tournament game, if they get that opportunity. For his part, Mack wasn’t lobbying after Wednesday’s loss, even after ESPN’s Joe Lunardi downgraded them to “last four in” after the loss.

“I don’t worry about making my case,” he said. “I mean, we played one of the hardest schedules, we’ve been on two COVID pauses, you know, if the NET includes margin of victory, two of our blowout losses were after we took multiple-day pauses coming off COVID on the road. So it is what it is. I think we’re certainly capable of winning games in the NCAA Tournament, given the opportunity. I think we’ve done enough to earn it, but I’m not in that room.”

Losing is one thing. Not being exciting or inspiring is another. If Louisville does get to the NCAA Tournament, it’d be a good idea to not have a repeat of what just happened in Greensboro, North Carolina.