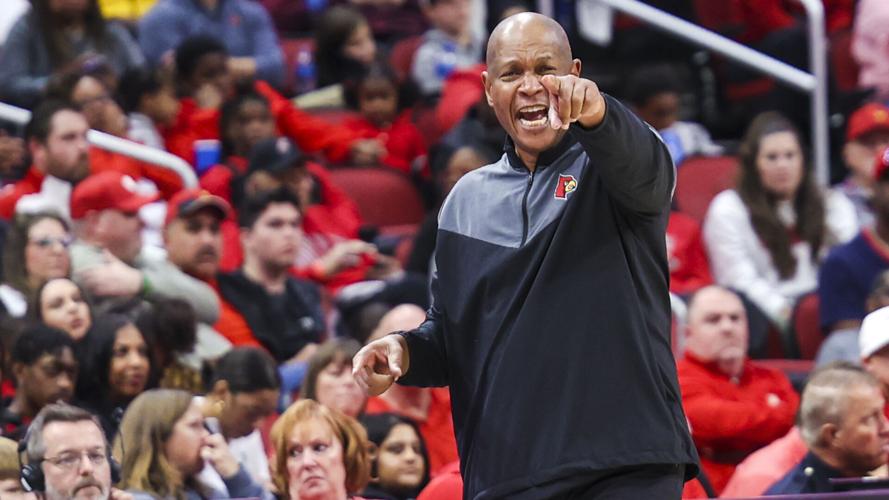 Kenny Payne shouts to his team during a loss to Wake Forest on Jan. 7, 2023. (Eric Crawford photos)

LOUISVILLE, Ky. (WDRB) – Through the worst season in Louisville history, first-year coach Kenny Payne has maintained a consistently patient posture. It has been a feat of forbearance. A study in self-restraint.

But on Saturday, after an 80-72 loss to Wake Forest in which his team seemed to sleep-walk through the first 30 minutes, some cracks started to show.

It would be one thing if his team were just bad. (And objectively, it has been bad. You don’t get to 2-14 without being bad.) But this team can, in stretches, play competitive basketball. The light will flip on and it will make hustle plays, defend, rebound and execute offensively.

Those things don’t happen by accident. Clearly, Louisville’s players have been coached to do some things the right way. They just aren’t consistently doing them, or doing them with intent or determination. That, of course, doesn’t let a coach off the hook. It’s the coach’s job to get them to do the right things.

Regardless, Payne was clearly frustrated after watching his team outscore Wake Forest down the stretch of a game it once trailed by 22 – especially on the heels of a one-point loss to Syracuse in which his team showed signs of progress.

In this game, Louisville outscored Wake Forest 46-37 in the second half and shot 51.7 percent. The Cards had 8 assists and only 4 turnovers in the half.

“Moral victories. I don't want them,” Payne said when looking over the stat sheet. “I want us to play like that the whole game. And I just told the guys, 'Don't find new ways to lose for me. Fight. I don't care that they may have more talent than us. Fight. Every second that you're on that floor. I don't want to play games, guys. And I'm just going be honest with you, where I got different guys missing from the game. I want every player whose feet hit that floor to fight.’”

But Payne was just getting warmed up.

“I don't want to look at a game and see Brandon (Huntley) Hatfield has 2 points, whatever. Not acceptable. That's not why I brought him here. That's not what he wanted. He's got to give it to me,” Payne said. “I should not have to go through what I'm going through with Jae'lyn (Withers). Jae'lyn has to fight. Now I'm not throwing Jae'lyn under the bus. But I'm saying this to say this -- I need these dudes to understand there's an obligation to this program that started long before they got here. Their job is to keep it and go it forward. No matter what happened in the past. That's over. We're starting new. I need these guys to play with pride. I see it in stages. I just don't see it consistently.”

Payne’s voice has been a steady source of support for his players, despite lopsided losses and lackadaisical efforts.

But on Saturday, Payne did a bit of calling out, and naming of names. And that’s a different tone.

“I praise them for everything they do that's positive,” Payne said. “But I also look at the game and I see multiple turnovers time and time again. How is that possible? Some of the turnovers, you can't even make up, just lackadaisical turnovers, like they're not concentrating. This is frustrating. It's frustrating for me and I know it's frustrating for them. But I'm going to say this again. In no way am I disappointed in any kid. My job is to help them get better. I see them getting better. But I need them to understand what winning is. I need them to understand that there are no excuses.”

Some of Payne’s frustration, no doubt, was having the 1982-83 Louisville Final Four team on campus for practices and to be honored at Saturday’s game. Payne showed his players video of that team.

“For me, I go back to this, and you know it a tribute to Denny Crum because Coach Crum was ahead of his time,” Payne said. “When I watch that ’83 team play, I see a great passing team. I see guys that play together. I see guys that were one unit. The ball moved. There was nobody that was playing for themselves. Everybody touched the ball. Everybody was versatile. Everybody could post. Everybody could shoot. I saw basketball players, and they were playing for each other to win a game. I want our guys to take that spirit, the spirit of fighting and the pride for what's on your chest. Louisville has a proud tradition. And I don't want to say that we've lost that, but something's off, and we’ve got to get it back.”

Truth be told, it has been off the rails since the last of Rick Pitino's players departed. The disfunction and lack of connection to Louisville's tradition began with the end of that era, and some of it began before that.

None of that was of Payne's making. But now presiding over his own little corner of that sad story, the former Louisville player in his first head coaching job is finding it perhaps more difficult than expected to build a bridge back to it.