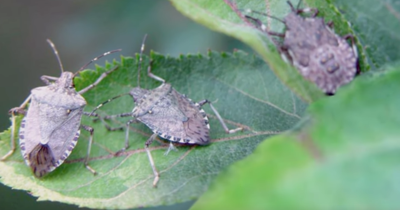 Have you been seeing an increase of this annoying bug in and around your home lately?! Well, you can blame the weather!  Stink bugs often seek shelter in homes once the weather becomes cooler each fall. These pests have become a familiar sight and the invasive species continues to spread across much of the country.

They end up inside because they are looking to protect themselves from the harsh elements of winter. As the temperatures get colder and colder, they seek refuge in homes and go into a state of hibernation. Interestingly, the warmth from the house can draw them out of hibernation in the winter. You will usually find them near windows, lights, TVs or computers. They also will release a chemical alerting other stink bugs they have found a spot to hang out out, so stopping them from initial entry is key. But how do you do that? Let's discuss!

What Is A Stink Bug?

The stink bug is technically known as the Halyomorpha halys and also goes by the name brown marmorated stink bug. The stink bug has an interesting story because it is not native to the US, but unfortunately it was accidentally introduced likely sometime in the 1990s and was collected for the first time here in 1998.  The stink bug quite frankly doesn't have a lot of redeeming qualities. It is an agricultural pest and can really cause a lot of problems to fruit and vegetable crops.

The smell from the stink bug has been characterized as a pungent odor and some have described the stink as a scent that smells like cilantro. The stink bug actually emits the smell through its abdomen and was meant to defend it from predators. Unfortunately, touch or any handling of the bug will cause it to release the odor and they have become a real problem over the last few years.

How To Keep Stink Bugs Out?

If you have encountered the stink bug, then you know you don't want them in your home. Here is a video showing you how to get rid of the dreaded stink bug should you encounter it in your home...