The statewide system with about $2 billion in annual revenue will trim down and focus on Central and Eastern Kentucky.

“The great change and great uncertainty in the health care industry has strained our financial health,” KentuckyOne CEO Ruth Brinkley said in a news release. “Market forces have evolved to the point that change is needed to allow ongoing support for health and wellness in Kentucky.”

KentuckyOne did not announce a buyer of the facilities, but said, “Work is underway to identify future owners who will be better equipped to continue the commitment to quality care, employee engagement and community support.”

All told, about 4,000 people work at the facilities KentuckyOne plans to sell.

A KentuckyOne spokesman was unable to say whether all the hospitals and outpatient facilities would go to a single buyer or in pieces to multiple buyers.

"All viable options will be explored, as long as they position the facilities for future success, and ensure continuity of care," KentuckyOne spokesman David McArthur said via email.

McArthur said it's too soon to say when the sales will take place.

"This is the beginning of the process and that has not be defined," he said.

KentuckyOne is already planning to incur a $272 million loss in July when it gives up management of University of Louisville Hospital and the James Graham Brown Cancer Center after a dispute with the university. Those two facilities will be under U of L's control starting July 1.

Louisville Mayor Greg Fischer said there's a lot of uncertainty around healthcare in the country, but he hopes a potential buyer continues the work that KentuckyOne started.

"Some ground-breaking medical practices in the history of medicine have taken place in these facilities," Fischer said. "So my hope is that potential acquirers will see that ... they'll come in here and help them grow on to even greater heights."

KentuckyOne has struggled since 2012 formation

KentuckyOne, which has about 12,000 employees across the state, is the result of a 2012 merger between Jewish Hospital & St. Mary's Healthcare in Louisville and the St. Joseph Health System in Lexington.

KentuckyOne has cut at least 1,000 jobs through layoffs and other measures in various rounds of cost reduction measures since 2014.

The moves have helped KentuckyOne, which lost $69 million in the year ended June 30, 2014, begin squeaking out a modest operating profit. But the turnaround evidently has not met expectations.

Meanwhile, CHI itself is experiencing “weak operating performance” and declining cash on hand, according to Moody’s Investor Service, which downgraded the nonprofit company's debt in March.

For the six months ended December 31, KentuckyOne posted the lowest operating margin – 1 percent -- of CHI’s 11 regions, according to the organization’s latest public financials. CHI’s average regional margin for that same period was 5.7 percent. 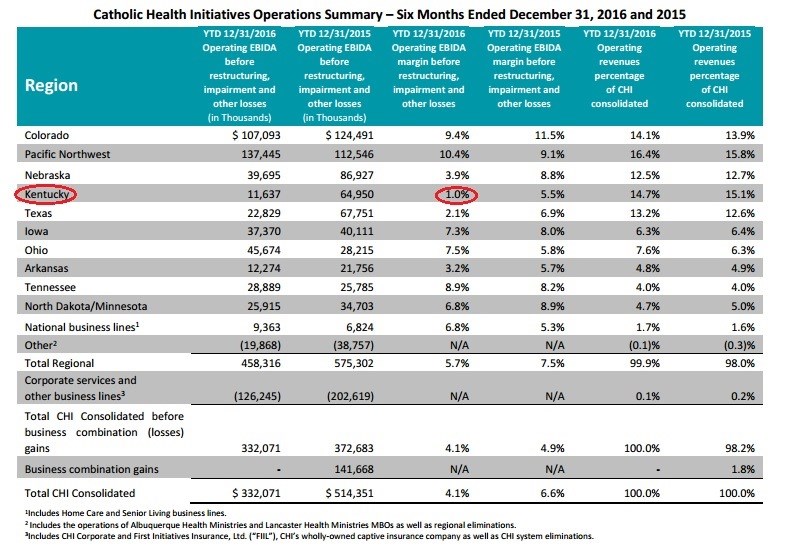 While KentuckyOne showed “some improvement” in CHI’s most recent fiscal year – which ended June 30, 2016 – the division’s performance “deteriorated again” in the latter half of 2016, Moody’s said in March. KentuckyOne is “is expected to be challenged further with the loss of the University Medical Center (University Hospital),” Moody’s said.

KentuckyOne manages most of the operations of University Hospital and U of L's James Graham Brown Cancer Center under a joint operating agreement with the university.

But after less than four years, university officials accused KentuckyOne of reneging on its obligations, and both sides agreed to return the hospital and cancer center to U of L starting July 1.

CHI's financials show that University Medical Center -- which includes the hospital and the cancer center -- made $7 million in the last half of 2016 on revenues of $256 million.

Interim U of L President Greg Postel, a medical doctor who also oversees the university's Health Sciences Campus, has said U of L Hospital got a big boost in 2014 from Kentucky's expansion of Medicaid under the Affordable Care Act. The hospital sees many fewer uninsured patients because Medicaid now covers more people.

In April, KentuckyOne Health initiated its latest round of 250 layoffs, citing "challenges brought by the continuing evolution of health care reform and reimbursement structures."