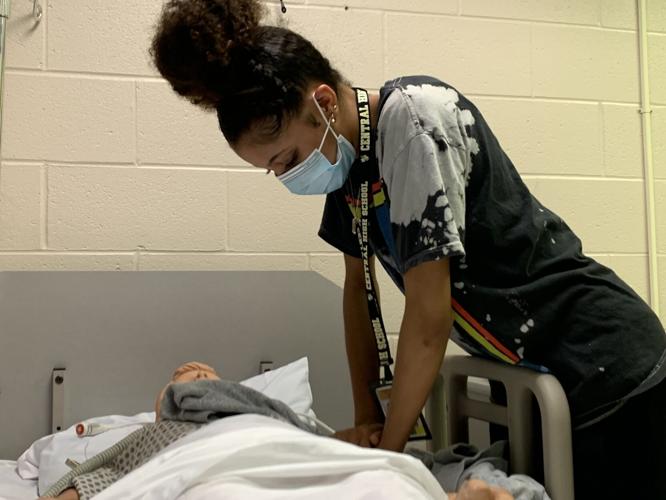 The Cental High School Junior helped save a man's life after basketball practice while driving home with her father. 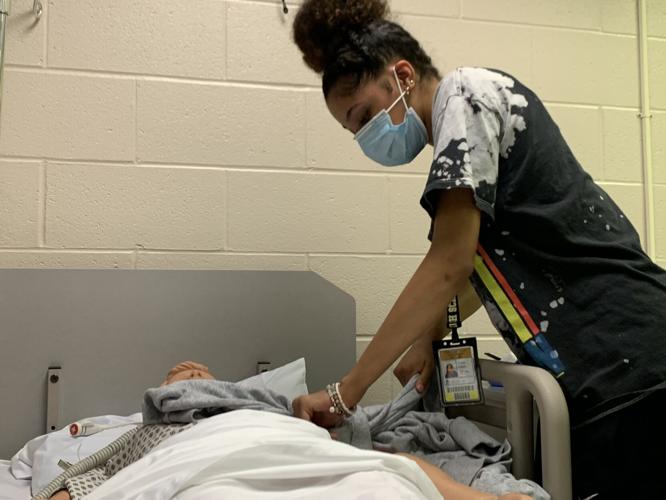 Nylaia Carter made a tourniquet with sweatshirt from her basketball bag to help save gunshot victim's life. 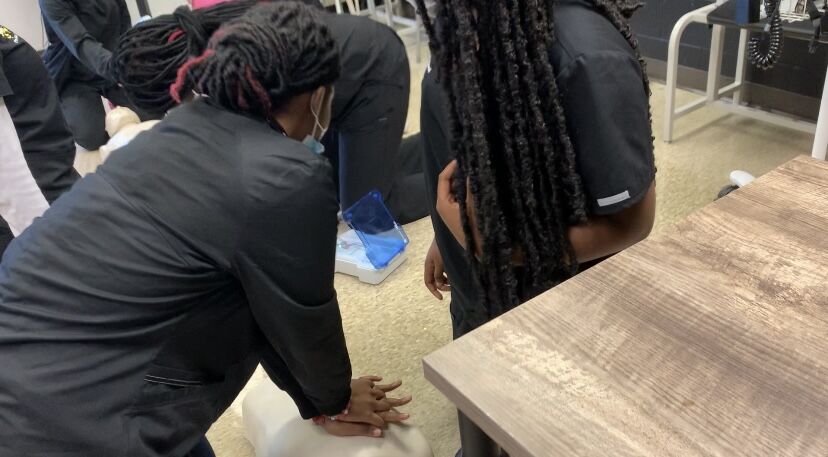 The teen knew how to help him because of what she learned at school.

LOUISVILLE, Ky. (WDRB) -- A student at Central High School is being praised for her quick action helping save a shooting victim's life.

Around 4:30 p.m. Wednesday, Nylaia Carter and her father Adam, were driving home from Nylaia's basketball practice at Central High School. When the two were passing by an apartment complex at South 11th and West Chestnut streets, they came across a man who had been shot.

"Police wasn't there. EMS wasn't there," Adam Carter said. "It was kind of like we were fresh on the scene. The initial thought, it looked like he was in a state of shock. He was just sitting up."

Nylaia Carter said she begged her dad to pull over so that he could help. He said at first, he was nervous and wasn't sure they should stop.

"She was just so persistent, 'Dad pull over. Dad pull over,'" Adam Carter said. "I had a 4-year-old in the back seat, and he was asleep. So I couldn't run off and just leave him. I just kind of had to pray and watch my daughter from down the street. Any parent would be reserved with that type of scene that was going on that day."

Nylaia Carter said she grabbed her basketball bag and ran over to help the man in need.

FROM THE CLASSROOM TO THE REAL WORLD | Today on ⁦@WDRBNews⁩ hear from the Central High School student who saved a life using training learned through a ⁦@JCPSKY⁩ program. Why she says she felt called to help a stranger in need. pic.twitter.com/rdVqB3Eqsv

"I went over to the man with my basketball bag," she said. "I made a tourniquet out of my sweatshirt, checked his pulse and kept him breathing and waited for the paramedics to get there. At first, he was OK. He was sitting up. And then, when I put pressure on it, he started losing blood and he started losing consciousness."

Nylaia Carter, a junior at Central High School, said she learned these skills in "Stop the Bleed" training she received as a sophomore at Moore High School as part of the Allied Health Pathway Program through Jefferson County Public Schools.

"Most normal people don't carry around a tourniquet," she said. "So we learned how to make a tourniquet out of everyday items."

The teen and her dad said it took about five minutes for EMS to arrive. During that time, Nylaia Carter relied on her training and kept the man talking while explaining what happened to him and who she was.

Although the situation was heart-pounding, Adam Carter said he is in awe of the way his daughter handled herself.

"When I saw her go into action like that, I was proud," he said. "It was a proud dad moment. It just kind of confirmed to me that OK, God has a call on her life, and this is what she's meant to do. The feeling is really indescribable as a parent."

In addition to rendering aid to gunshot victims, students in the Allied Health Pathway Program learn life-saving skills for a variety of medical emergencies.

"I think, even if you're not in the medical pathway, this class is important," Nylaia Carter said. "There's other kids babysitting their siblings, and if they choke on something, you need to know what to do."

Her teacher, Shantel Reed, has been a registered nurse for 17 years. She said this type of situation is always scary and nerve-wracking.

"As her magnet teacher, I'm incredibly proud of her," Reed said. "She is a amazing. She is a rock star. I'm so happy it was just second nature for her. We always teach our students that we need to make sure the patient stays awake. We need to make sure that they're alert, they're oriented to exactly where they are, and we need to keep talking to them. That's exactly what she did."

Reed said one of the most important things they teach students is to stay calm in the event of an emergency.

"No matter whether they were hit by a car or a gunshot wound, you have to stay calm," she said. "I'm gonna tell you: That girl was calm."

Louisville Metro Police said after first responders arrived, the man was rushed to University of Louisville Hospital. He is expected to survive thanks, in part, to Nylaia Carter's quick action.

"I went to visit him in the hospital. I met with his family, and he's doing great," she said. "He was really grateful and so was his family. I feel good. I'm very grateful he survived and I could be a part of that."

Adam Carter said when they were visiting the hospital, the man was shocked to learn his daughter was only 16.

"He said when she got there, all he could remember was there was a girl there and she had a bag but he thought it was paramedics," he said.

Police believe the shooting may have originally occurred in the 3700 block of West Broadway, which is near 37th Street.  At the time of this writing, there have been no arrests. Anyone with information on the shooting can anonymously report it online here or by calling 574-LMPD.

With the rise in violent crime in Louisville in recent years, Adam Carter said he never wanted his daughter to be in that kind of situation but is glad to know she has the training she needs.

"When you look at the violence that's taking place in Louisville, a vast percentage of it is coming from the youth," he said. "So to see the youth be on the other end and be able to help, it really does the soul good. We're just glad she was in the right place at the right time."

Adam Carter said he frequently talks to his children about race and violence in the city and how to act in different types of scenarios.

"Being a black female, I have to have those conversations with her and my younger daughter continuously," he said. "Just telling them that we're in a society that really is not favorable for the African American. I'm always telling them they can be what they desire to be. They just have to work a little harder."

Nylaia Carter said she already has an idea of what she wants to do after high school. She said she wants to graduate from a HBCU and then combine her love of athletics and medicine by becoming a physical therapist for a professional sports team.