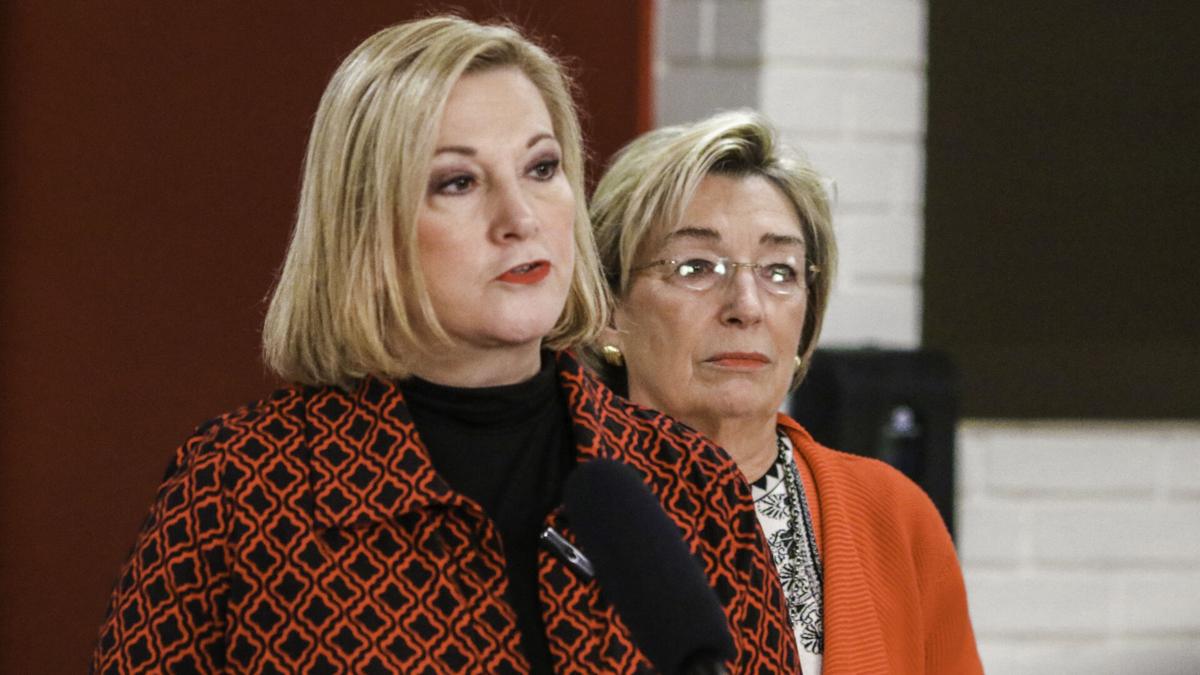 New University of Louisville president Lori Gonzalez speaks to the media, flanked by the chair of the school's board of trustees, Mary Nixon. 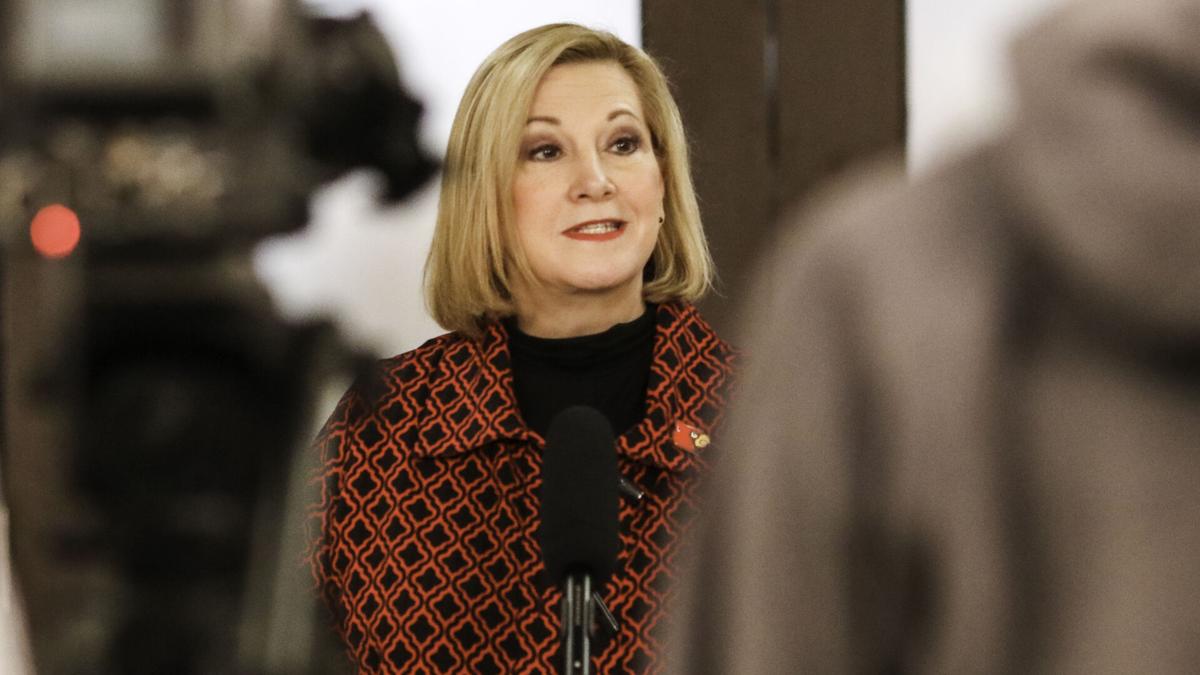 University of Louisville interim president Lori Gonzalez speaks with media after her appointment. 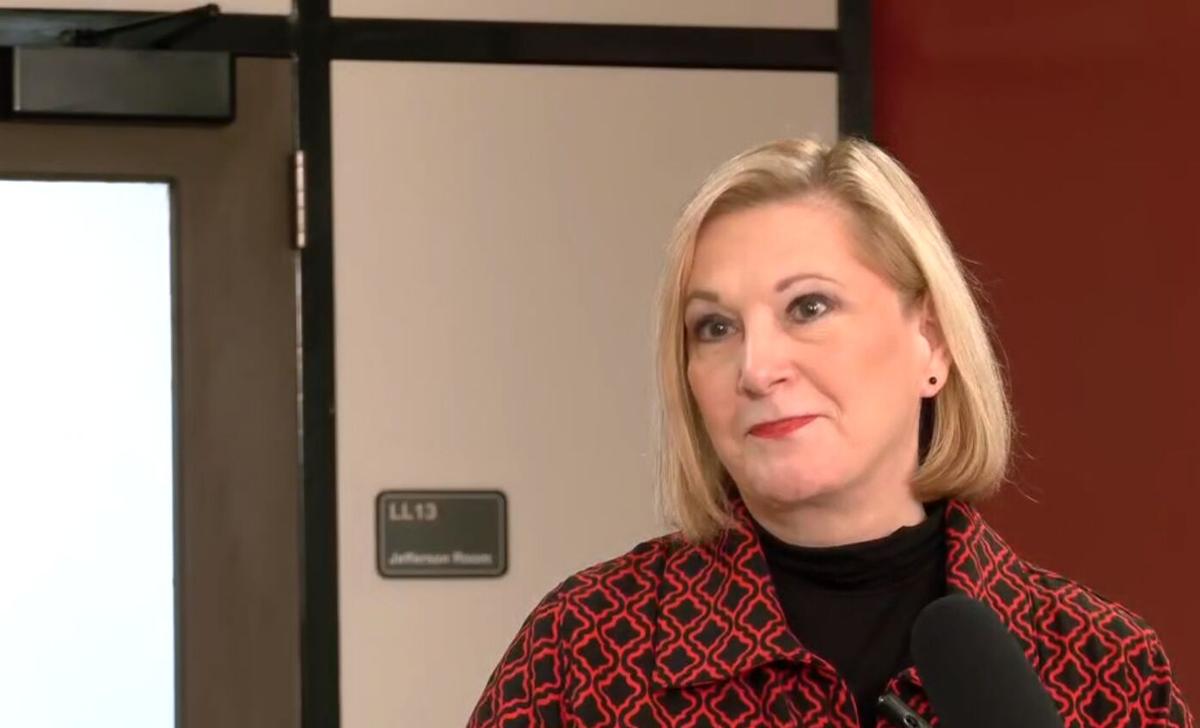 Pictured: Lori Gonzalez, the new interim president of the University of Louisville, speaks during a news conference on Dec. 13, 2021, in Louisville, Ky.

New University of Louisville president Lori Gonzalez speaks to the media, flanked by the chair of the school's board of trustees, Mary Nixon.

University of Louisville interim president Lori Gonzalez speaks with media after her appointment.

Pictured: Lori Gonzalez, the new interim president of the University of Louisville, speaks during a news conference on Dec. 13, 2021, in Louisville, Ky.

LOUISVILLE, Ky. (WDRB) -- The University of Louisville Board of Trustees appointed Dr. Lori Gonzalez as the interim president on Monday morning.

"I'm very humbled to step into this position at a time when our university has tremendous momentum," Gonzalez said in a news conference. "Our students are flourishing. Our faculty are changing lives every day, and our staff members are performing at an extraordinary level. And our passionate and loyal supporters, alumni and donors have never been more committed to elevating the University of Louisville. "

Gonzalez is the executive vice president and provost at UofL, and provides leadership for the academic affairs of the university. The position made her an advisor to outgoing university president Neeli Bendapudi, who is leaving to take a job as president of Penn State. The provost also steps in to lead during presidential absences.

She said she wants to reassure everyone. "I realize that the sudden departure of our president and athletic director that for many in the Cardinal community they're anxious and wondering what comes next. All those emotions are expected."

"While this is a period of change and transition, I can speak with absolute confidence that our work will continue and that the spirit of the UofL community will continue to shine, as it has throughout the century," Gonzalez said. "Throughout my career, I've practiced my belief that through education we change lives and improve the quality of life of our community. In the role of interim president, I have the obligation to prepare tomorrow's leaders for making a difference where they live and to be socially engaged in a way that improves the human condition."

Gonzalez opened her statement by offering support to those impacted by the western Kentucky tornadoes.

"Our state had a devastating tornado, and I wanted to mention that. I want to offer our condolences to our fellow Kentuckians for family members lost and homes lost. So we are working to support our students because we have lots of students in that area," she said.

Gonzalez said there are two major challenges she will address in her interim role. The first is the budget. She said it's important for the university to hold tuition costs down so that it's affordable for students.

She also said COVID is a problem for UofL, and for all universities in the country. Gonzalez said the UofL campus has a 92 percent immunization rate, but there are concerns with variants over the holidays.

For now, Gonzalez said she appreciates the opportunity.

"I want to say to the Louisville community, thank you. Thank you for what you do for the university, our community and what you do for each other. There is nothing that we can't accomplish together, and I look forward to working with you in the months ahead, as we continue our journey," she said.

Board of Trustees chair Mary Nixon said everything has moved so quickly that no decisions have been made about beginning the search for a permanent UofL president. The actual search, she said, would likely begin after the holidays.

In her first official act as interim president, Gonzalez appointed Josh Heird as the interim director of athletics to fill the job left open by the resignation of Vince Tyra.

"Many of you know Josh, and he's been an integral part of our athletic success, cultural change and pursuit of excellence. I'm confident our athletics program is in good hands," she said.

Gonzalez taught at Southern Illinois University at Carbondale in 1988 and returned to the University of Kentucky in 1991 as an assistant professor in the Communication Sciences and Disorders program.

Gonzalez spent 20 years at UK where she became the Associate Dean of Academic Affairs. She was appointed UK’s Dean of the College of Health Sciences in 2005.

She served as the UK provost and executive vice chancellor for three years beginning in 2011. Gonzalez held a similar position at Appalachian State University and was special advisor to the senior vice president for academic affairs at the University of North Carolina.

Gonzalez was the Vice Chancellor for Academic, Faculty and Student Affairs at the University of Tennessee Health Science Center in Memphis, Tennessee from 2015 to 2021. She came to UofL as provost in April 2021.