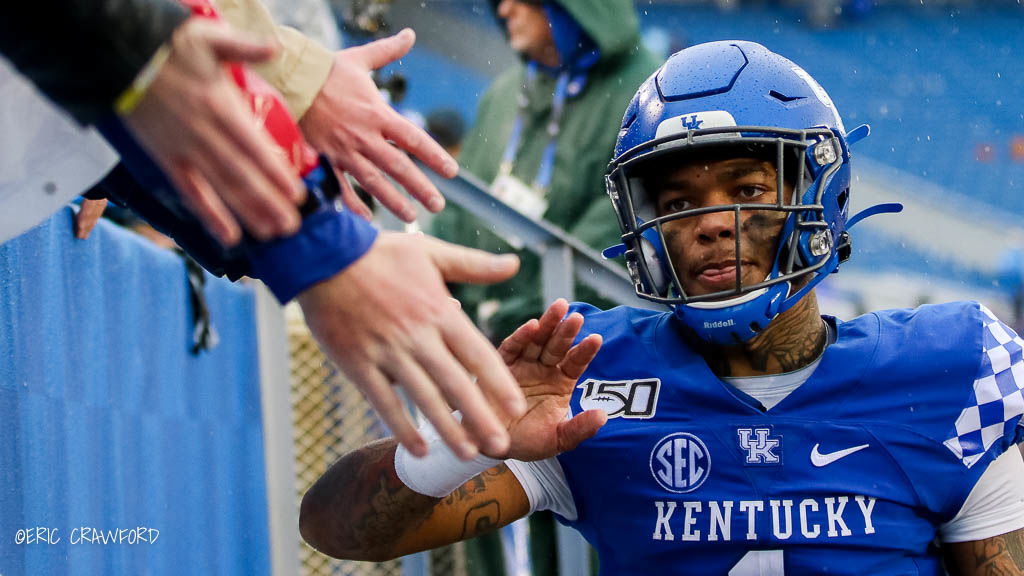 Not Joe Burrow. Not Trevor Lawrence. Not Tua Tagovailoa.

I’ll make Mark Stoops my blocking back on this one. The Kentucky football coach cleared the way for this tricky conversation, long before the Wildcats arrived for the Belk Bowl game they will play against Virginia Tech at noon Tuesday.

Who needs a blocking back to write a column about quarterbacks? Just write what you see and what you believe.

I’ll back into this conversation by telling you that I asked Bowden about Jackson Monday, and even though Bowden continued his juvenile insistence to refer to the Cardinals as “the other team over there,” Bowden loves Lamar Jackson and everything about the way Jackson plays quarterback.

“He’s awesome,” Bowden said. “Ever since he’s been in college, I’ve been watching him. I don’t talk about the other team over there but I’m always going to be a fan of him.

“We talked a little bit my freshman year after the (U of L-UK) game. I’m not going to say I know him because that’s false language.”

Here is what important to note: When Bowden made the move from receiver to quarterback for Kentucky, he became almost everything to the Wildcats that Jackson was to the Cardinals three seasons ago.

Let’s stop right here: I am not saying Lynn Bowden is Lamar Jackson.

He isn’t. Nobody is. Not close.

Bowden cannot throw the football with the zip or accuracy of Jackson. Bowden had one passing game of 100 yards. Jackson had 16 games with at least 250 passing yards over three seasons.

As a runner, Bowden has more power, Jackson has an infinitely larger catalogue of moves. Bowden ran for 196 or more yards in three of UK’s final seven games. Jackson did not run for more than 180 yards in a game as a junior. Didn’t have to. He can throw. It’s why he will be voted MVP of the 2019 NFL season.

But Bowden’s impact on Kentucky’s success has been nearly as dramatic as the juice Jackson gave Louisville. As Stoops put it so perfectly several weeks ago, Bowden has that ultra-Alpha male in him.

Bowden will make plays. Bowden will accept risks. Bowden caused problems for the opposing defense. Bowden got Kentucky from 2-3 to 7-5. When you watch Kentucky attack, you don’t take your eyes off Bowden, just as your eyes were once locked on Jackson.

As I’ve written several times, Bowden saved Kentucky’s season by moving to quarterback from receiver — at the risk of negatively impacting his professional career.

Bowden will likely annoy Louisville fans with this observation but on Monday he told me that he has not been impressed by what Jackson has achieved by leading the Baltimore Ravens to the best record in the National Football League this season.

For Bowden, impressed is the wrong word.

For Bowden, proud is the correct word.

“Lamar is in his own category,” Perry said. “I feel like it would be disrespectful to compare anybody to him.

“Most quarterbacks we see aren’t this big. It’s going to be a very good challenge for us … I can’t wait to play against him.”

Here is an interesting note to consider: Only two players have run for 100 or more yards against the Hokies this season. Both were quarterbacks.

The first was Quentin Harris of Duke, who carried 17 times for 100 yards. The second was Bryce Perkins of Virginia, who had 164 yards on 19 carries.

Bowden finished 2019 as the third-leading rusher in the Southeastern Conference. Over the Kentucky’s final seven games, Bowden averaged 162.3 yards while rushing for 11 touchdowns. The Wildcats went 5-2.

One more spectacular performance would be a perfect final act, but regardless of how well Bowden performs at quarterback against the Hokies, this is The End of his run at that position.

Two things are certain: He is exiting for the NFL and he is returning to wide receiver.

“I probably could (play QB in the NFL), but I’m a reasonable guy so I know where I’m going to play,” Bowden said.

“Yep,” he said. “And all over the field offensive threat.”

Lynn Bowden played the position more than reasonably well. He played it well enough to save Kentucky’s season, giving the Wildcats a guy they relied upon as much as Louisville once relied on Lamar Jackson.

CRAWFORD | Coronavirus Digest: At the end of a grim day, leaders point to a long ordeal