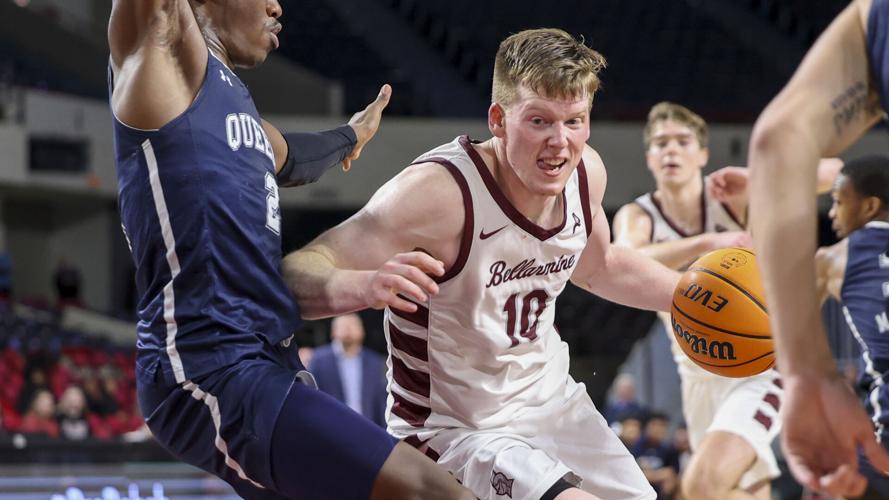 Bellarmine's Garrett Tipton drove for two of his career-high 27 points in a 75-74 loss to Queens on Thursday, Jan. 5, 2023, in Freedom Hall. (Eric Crawford photo) 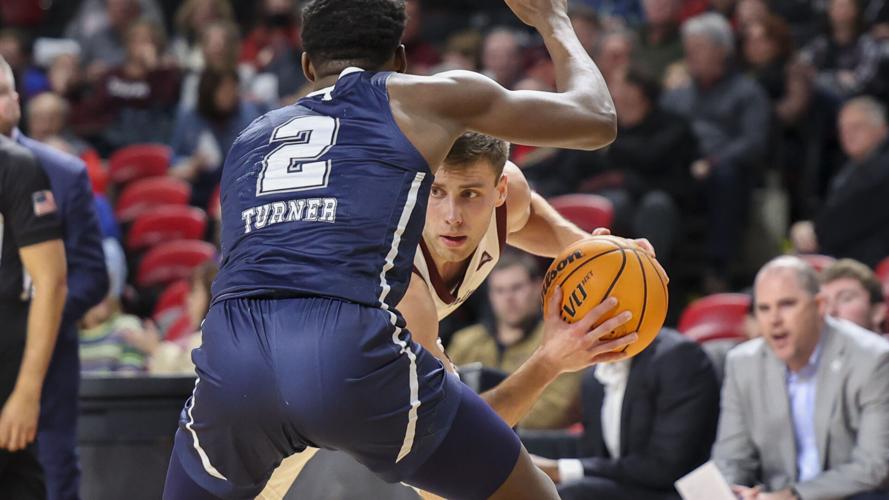 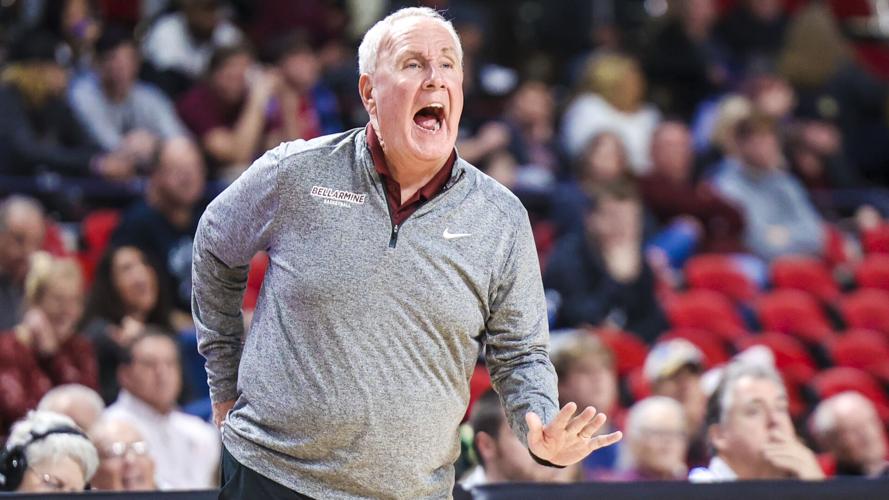 Bellarmine coach Scott Davenport shouts to his team during a 75-74 loss to Queens on Thursday, Jan. 5, 2023, in Freedom Hall. (Eric Crawford photo) 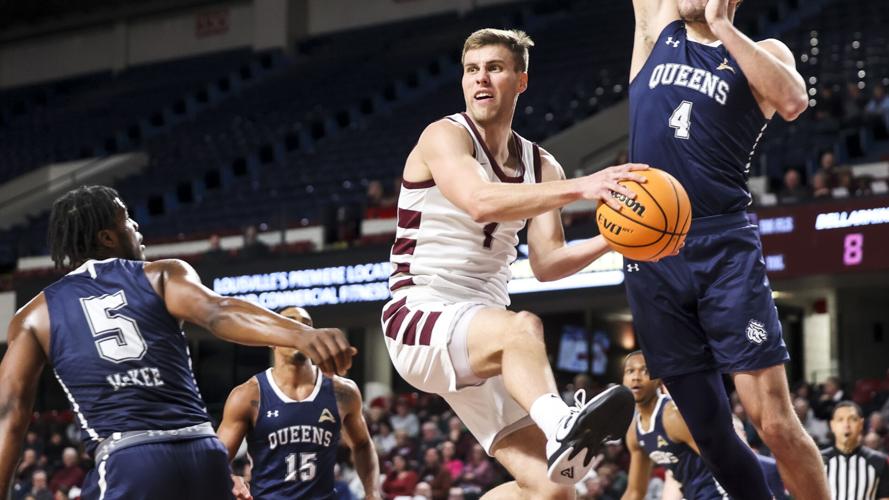 Bellarmine's Juston Betz dished out one of his game-high 8 assists during a 75-74 loss to Queens on Thursday, Jan. 5, 2023, in Freedom Hall. (Eric Crawford photo) 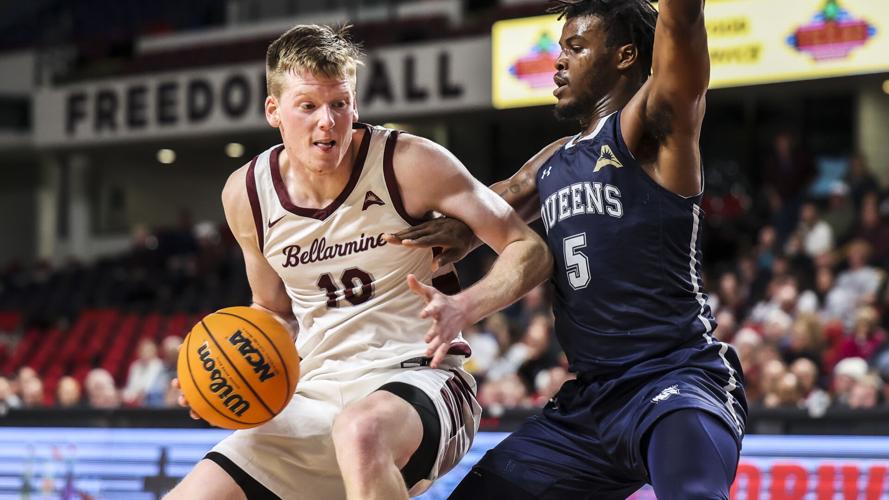 Bellarmine's Garrett Tipton drives to the rim during a 75-74 loss to Queens on Thursday, Jan. 5, 2023, in Freedom Hall. (Eric Crawford photo)

Bellarmine's Garrett Tipton drove for two of his career-high 27 points in a 75-74 loss to Queens on Thursday, Jan. 5, 2023, in Freedom Hall. (Eric Crawford photo)

LOUISVILLE, Ky. (WDRB) -- Sometimes, I wonder if people really understand the work that goes into the score lines they see crawling by on ESPN or the local news. Bellarmine’s 75-74 loss to Queens on Thursday night in Freedom Hall is that kind of game.

Maybe it passes with a "close one" comment. Maybe not even that.

Most people don’t see the frustration entering the locker room after the loss. The fists slamming into the locker room door. The guttural expletives shouted in frustration. When Bellarmine loses a game, the response that I’ve experienced has always been the same, regardless of NCAA classification, or opponent.

Forget that if ever a group of players had an excuse to believe that the world is against them, it’s this group. The NCAA Transformation committee tells them they don’t deserve to be eligible for the NCAA Tournament. It might as well have sent each player on the Bellarmine team an e-mail with a one-word instruction: "Transfer."

Find another school. Forget your academic pursuits, professors, friends. If you want to play in the Big Dance, find another partner. Become a free agent. The top scorer on last season’s team did just that. It’s the NCAA solution for these players. That’s the official course of action mapped out by the transformation committee leadership. You can look them up. A player from Manhattan transferred at the start of school last semester and played for West Virginia Thursday night. These guys showed loyalty, and get zero respect from the NCAA.

But there’s more. Scott Davenport’s team endured four significant surgeries in the span of a couple of weeks a while back. They’re down to 10 bodies, though not all of them healthy. Davenport’s rotation is down to six guys, with several others seeing spot duty.

They played in Alabama on Monday night. Took a bus back to Louisville and got back in the wee hours on Tuesday. Played again on Thursday. On Friday, they’ll climb back aboard the bus and go back to Alabama for a game. Who are the geniuses who decided that was a good way to treat this team?

Whatever. A team that traveled to Cameron Indoor Stadium, Pauley Pavilion and Rupp Arena on a single road swing can handle it. You’d just expect your own conference to be a little more forgiving, or at least not schedule you coming off a quick road turnaround against a team that hadn’t played in four days.

Midway through the first half on Thursday, Bellarmine led by 4. At the half, the Knights trailed by 14. A minute into the second half they were down 17, and you figured that the injuries and fatigue and assorted other junk had finally taken its toll on this group.

Then they rallied back, and wound up taking the lead in the game’s final two minutes. The game was lost on a Queens offensive rebound off a missed free throw. The ball was kicked out, and the visitors made a three to take control in the final minute.

Bellarmine still had a shot to win. It inbounded the ball with 0.6 seconds left. It ran the inbounds play perfectly, got the third of three options on the pass, lofted a three from the hands of Alec Pfriem. It bounced off the rim.

"It’s tough," Davenport said. "That’s a tough locker room. It’s tough because if any shot goes in — and I’m not just talking about Alec’s shot — if any shot goes in, nobody’s sore. Nobody’s complaining. Everybody’s euphoric. You look at the game. Our goal is to rebound 75% or more of their missed field goal attempts. They missed 31 shots and got 15 offensive rebounds. That’s No. 1. No. 2, we're up four with that 10 and a half go in the first half, and we're down 14 halftime. You have to play 40 minutes to beat a good team. How does that happen? Well, we had 10 eligible players tonight, healthy players to play. Yeah, we miss Ben (Johnson), we miss Bash (Wieland). But the reality is we don't have them.

This is a Bellarmine team that is trying to hold the line for as long as it can until reinforcements are cleared to come back. It battled for a win at North Alabama on Monday night. It nearly clawed its way back from a 17-point second-half deficit to win on Thursday. Now it is back on the road, where things will get no easier at Jacksonville State.

But Davenport has no doubt he’ll get a solid effort. He knows his players care. On Thursday night, Garrett Tipton scored a career-high 27 points. Peter Suder added 22. Juston Betz had 8 points and 8 assists.

"The players deserve credit," Davenport said when asked what changed for his team after halftime. "They deserve the credit. They're smart. They're smart basketball players. They're incredible young men. You know they are. But that loss is tough, though. Golly, it's tough."

Will he be eligible to have a horse in this year's Kentucky Derby?