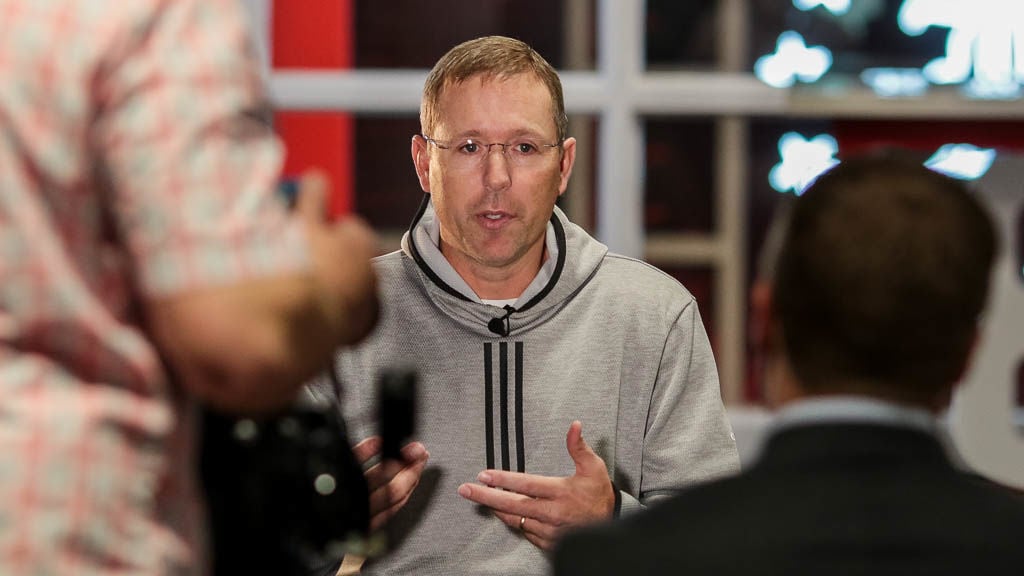 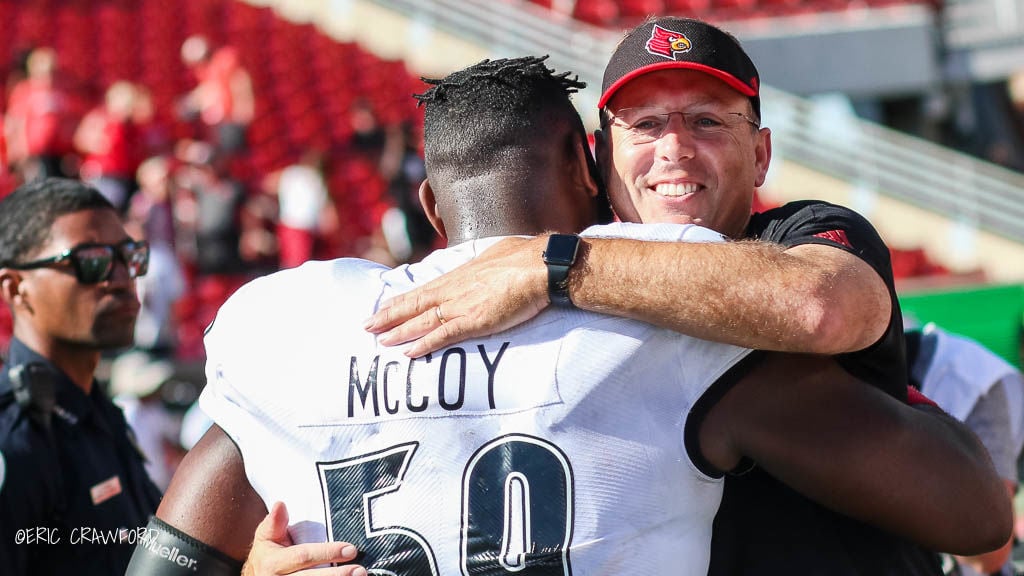 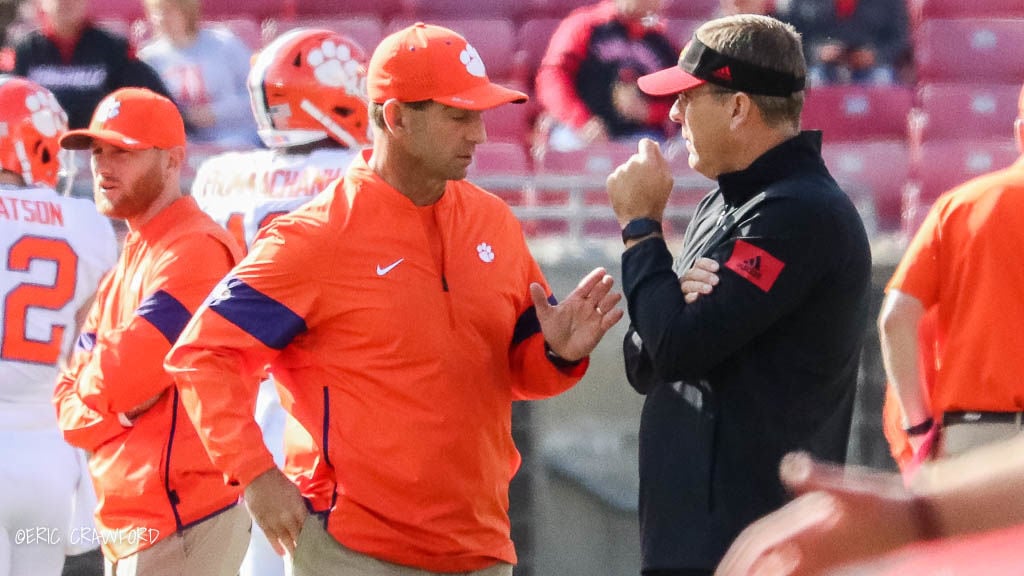 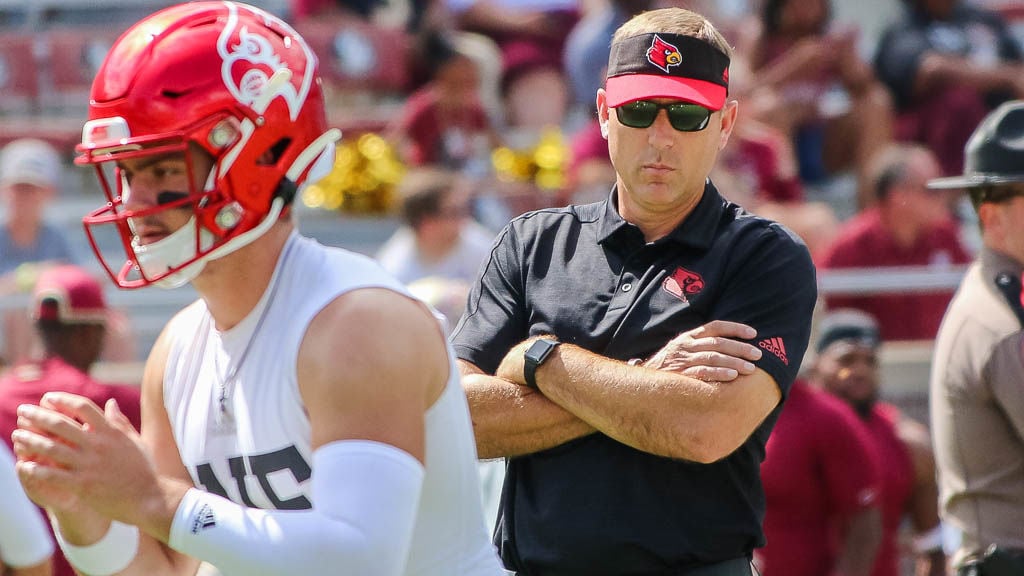 LOUISVILLE, Ky. (WDRB) – On the day he was named a semifinalist for national coach of the year, first-year University of Louisville head coach Scott Satterfield walked in for an interview with WDRB’s Aaron Matas and Eric Crawford in a gray sweatshirt, and started talking about a segment on ESPN – “Come on, man!”

Turns out, the segment featured Louisville defensive line coach Mark Ivey and Georgia State coach Shawn Elliott, and the crazy things they do before games to fire up their players.

“They show them in pregame hitting people and all that,” Satterfield said, “then they show a screen up that had both of them. What they didn’t know is that those guys were roommates. Ivey and Elliott lived together for five years (at Appalachian State). Elliott and I were captains together. It’s just funny.”

There’s a lot of smiling around the Louisville football complex these days. And, having just gained bowl eligibility with their sixth win of the season, there is plenty of reason to smile.

But on Wednesday, Satterfield talked with WDRB about what went into the turnaround from last season’s 2-10 finish, and where the program still needs to go.

As late as spring practice and signing day, Satterfield still thought he was fighting uphill.

Asked when he realized his team had a good chance to exceed expectations, he knew just the moment.

“Well, you know, it wasn’t spring ball, that’s for sure,” he said. “We were still a long ways off. Even during summer workouts, we still had a lot of work to do. . . . You really don’t know what to do until they get on the field. That’s why the Notre Dame game for me was eye-opening. Because it was real. The lights were on and you’re playing a really good opponent, and our guys compete. And at that point, I thought, we’ve got something to work with, we can have a great season. . . . The Notre Dame game gave us some confidence we could play, but we still hadn’t arrived, and we haven’t arrived now. I feel like we’re still a work in progress. We’re still trying to get better. We’ve won some games, which has been awesome. A lot of close ones. But it’s just been a great journey with these guys, and we’re having fun trying to get better.”

Satterfield hasn’t come in with a lot of flashy slogans – and he didn’t have time to fashion a big-time recruiting class. What he has built is a first-rate staff that is consistent with players, that has gained the trust of the team.

Satterfield said his being a semifinalst for national coach of the year is as much a testament to his staff as anything.

“Probably the biggest thing it says is that we have the right people here,” he said. “Our staff is incredible. They’re great to work with. Then working with these players has been awesome. When we first got there, they were hungry, hungry for a change. Hungry to be held accountable. Those things have been tremendous. It just proves that we’re headed in the right direction and doing the right things.”

You always wonder. Satterfield thought the approach he used for years at App State would translate to success on a bigger stage, but until you see it, you’re never sure. He wasn’t sure what the timeline of success would be at Louisville. He talked before the season about not measuring success in wins and losses, but in incremental improvements.

But the wins have come. Louisville’s four-game improvement over its first 10 games is the largest leap in the nation.

“It just reinforces that what we’re doing does work,” he said. “You can take what you did that worked at a Group of 5 school and bring it here, and the system still works. I tell you what it really reinforces for me, it’s all about people. That’s what it is. The people we surround ourselves with, within our staff and our whole organization, and it filters down through the players, you can have success. I’m proud to be a part of this, and the sky’s the limit here at Louisville. I think we can do some great things here.”

That success, of course, brings questions about other opportunities. Satterfield’s name has not been mentioned prominently with other jobs yet, but that hasn’t stopped him from having to field questions about it. That’s nothing new for him.

“We’ve been dealing with this at App the last four years,” he said. “You have a lot of success and your name comes up, and I’m always flattered by that, and that’s where you want to be. You want your name coming up. That means you’re doing a good job. We want that to happen here, year after year. I’m a guy who is going to do a good job, wherever I’m at. I was at App State for 23 years as a player and a coach. I don’t really like moving. Louisville is an awesome place to be, we’ve got a great program here. But we’d rather it be this way than the other way, with your name coming up on the hot seat.”

Satterfield won’t have to worry about that. In fact, Louisville athletic director Vince Tyra has said he’s working on enhancements aimed at keeping Satterfield here for a long time.

The work, the coach said, is only beginning, though he did add what the players have been able to accomplish in getting to a bowl game in his first season is meaningful.

“It’s special, no question,” he said. “You’re picked dead last in the ACC by everyone. And it was not a very good year last year. So we’ve been able to beat some teams that blew out Louisville last year, so it has been a special year, but we want to make it more special by finishing out strong. . . . I still feel like we’re fighting it every day. You’re guarding your culture. And you’re guarding against complacency, when you do have success. And that’s what we had to do at App the last several years. But here, it’s a fight every, single day to do things right and not take short cuts. It’s still hard. It’s still difficult. But that makes it fun when you win your sixth game in Raleigh against N.C. State and you celebrate in the locker room, because you know how much hard work you put into it.”