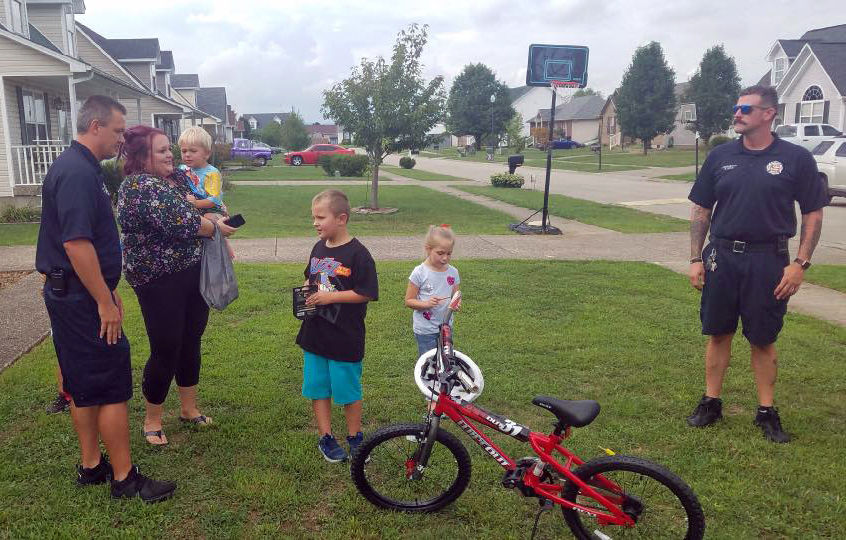 LOUISVILLE, Ky. (WDRB) -- The Shepherdsville Fire Department found a way to put a smile on a little boy's face after his bike was stolen.

Seven-year-old Jordan McFall had his bike stolen earlier this week. To make matters worse, the theft happened on his birthday.

"He was crushed," said Chris McFall, the boy's father. "I came home from lunch that Sunday morning, and he was told me outside to go look for it and it was wasn't there. ... We've been there almost 12 years in the neighborhood, and it has never happened so it was pretty bad for a little kid's bike to get stolen like that."

Members of the Shepherdsville Fire Department saw the boy's mom post about the stolen bike on social media and decided to help. Crew members took up a collection and went to the store. They purchased a bike identical to the one that was stolen, along with a bike lock and a helmet, according to a Facebook post.

"Within an hour, the Shepherdsville Fire Department wrote me asking if they could give Jordan a new bike," the boy's mother posted on Facebook. "Of course I said yeah."

Firefighters showed up to Jordan's house Tuesday with their fire engine's lights and sirens blaring, a proper build up to the unveiling of the new bike.

"I knew that, as a young man, how much a bike is and the freedom with it," Sgt. William Brown said. "We wanted give that back to him, and I knew he was probably upset and had that joy ripped away from him. (We) just wanted to put a smile back on his face, so it just meant a lot to be able to do something and help out."

Other crew members said they just wanted to show Jordan that there are still good people in the world. The boy's mother agrees.

"There might be bad in the world, but there is still a whole lot of good too!!" she wrote. "Thank you Shepherdsville Fire Department! This was an amazing experience!"