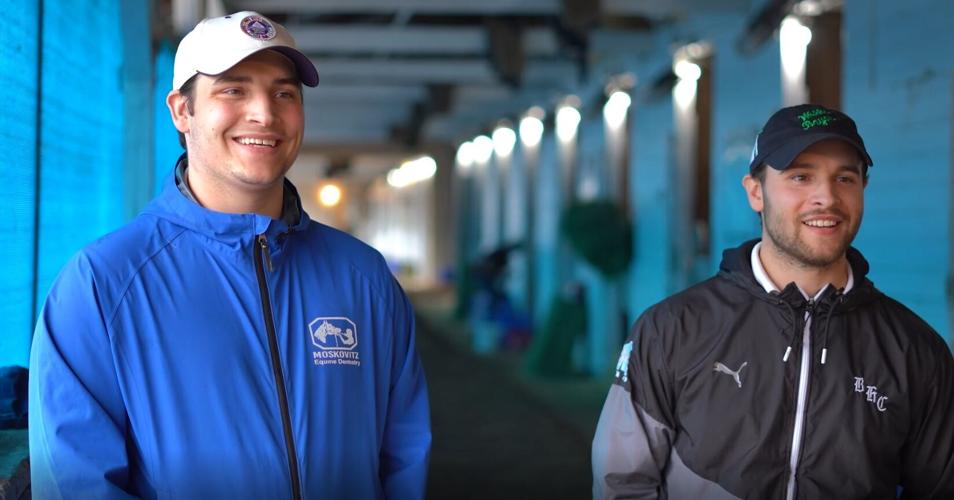 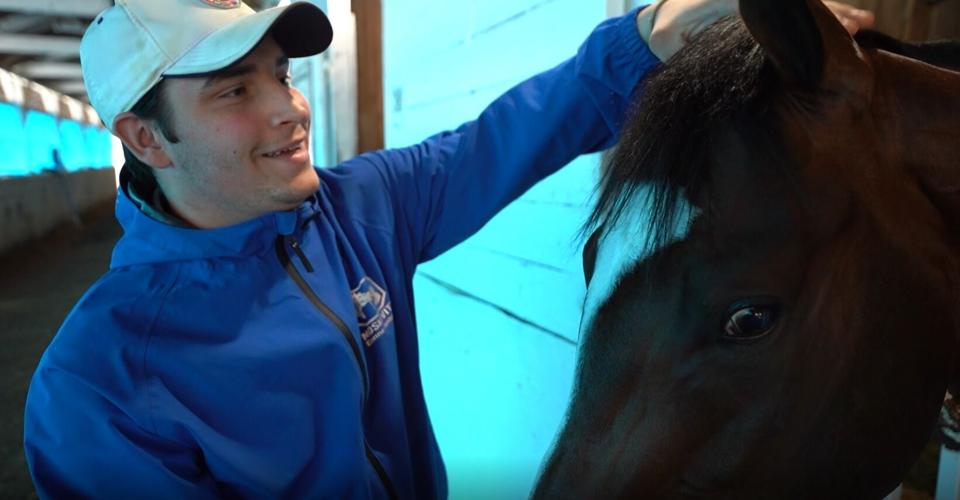 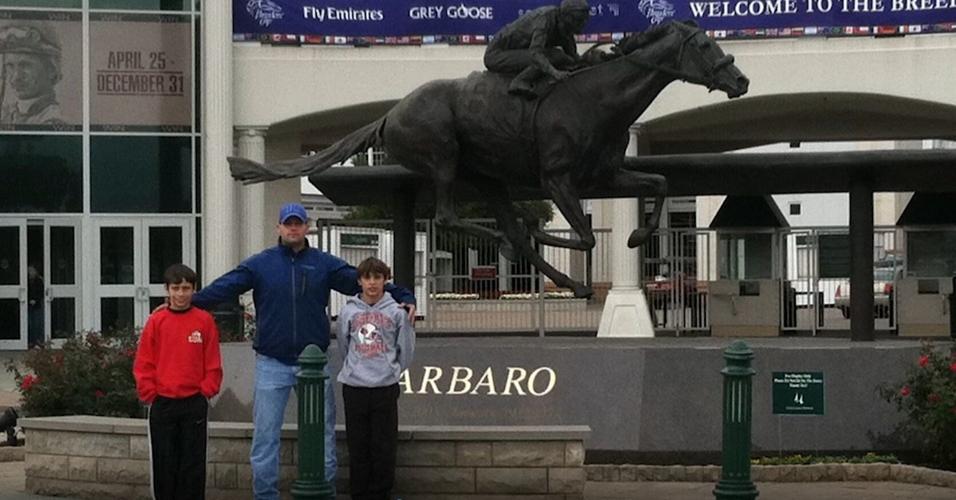 Pictured a few years ago at the front of Churchill Downs, Kentucky Derby winning trainer Brad Cox brought his sons, Blake and Bryson up around the family business. Image courtesy Brad Cox. 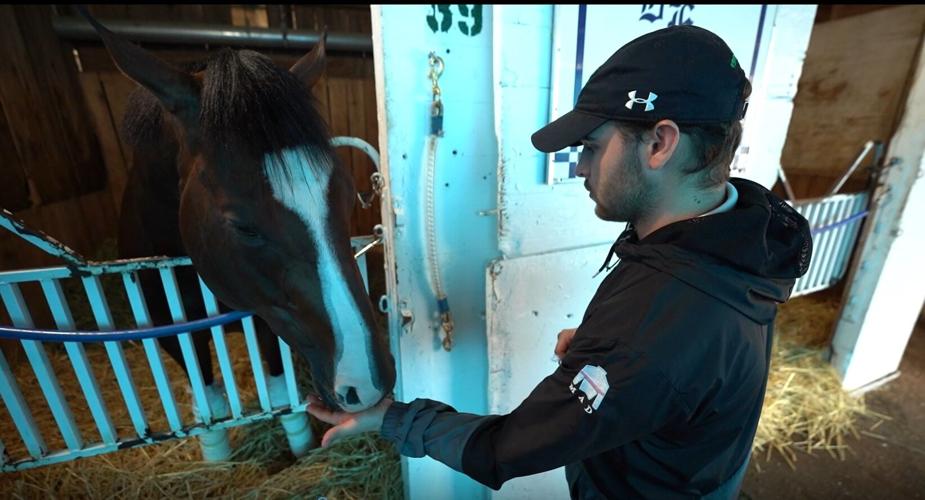 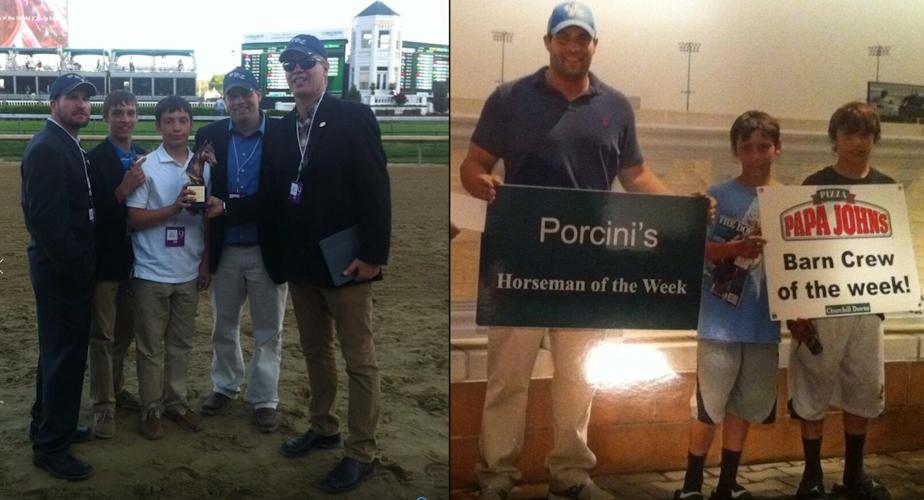 The 2021 Kentucky Derby winning horse came out of the Cox barn, and the Louisville native is one of hottest trainers in the game right now. He talked about what he expects out of his two sons and what it takes to compete at an elite level.

"Hard work and no excuses," he said. "There are very few excuses. You got to get up and do this every day. When they are in the barn, I treat them like all my employees. I probably expect more out of them."

His oldest son, Byson, is a stable foreman. His younger son, Blake, is an assistant trainer.

"You will headbutt occasionally," Bryson Cox said. "But at the end of the day, everything falls into place. It’s a lot of fun."

Make no mistake about it: The Cox brothers didn’t get a free ride. Just like their dad, they earned their spot at the barn through hard work.

"I remember after school, we would come back and set feed," Bryson Cox said. "We would get out of school at 2:45 p.m., and then you start setting feed at 3 p.m. That was in middle school."

They both fell in love with the sport at a very young age, and you could say it’s in their blood.

"It all started with my grandpa," Bryson Cox said. "He was a fan of the game and he would take my dad to the track and me and my brother. We grew up just a couple of blocks over, and we would walk to the track."

Little did the brothers know they would one day play a role in training Kentucky Derby winner in Mandaloun.

They both agree that you must be addicted to the sport to be successful. They report to work every morning dark and early around 4 a.m.

"It’s a whole team," Blake Cox said. "Grooms, hot walkers, riders, foreman’s, assistants — it’s a lot of hard work. It’s from about 4 in the morning to about noon. You go get lunch and then you are back at three."

They said their boss leads by example and uses every opportunity to pass on knowledge.

"Don’t treat all horses the same," Blake Cox said. "They are different. They have different personalities, different riders fit different horses, and just things like that."

"Just determination to be good at something," Bryson Cox added. "He said years ago. He wanted to be one of the best trainers and be as good as he could be and he’s living that dream just like he wanted."

"It means a lot that I can interact with them day to day," Brad Cox said. "I’ve never forced this on them at all. It’s something they grew up around and will try to make a living doing."

Brad Cox and his sons have another shot at glory this year with three horses running in the Derby: Cyberknife, Tawny Port, and Zozos.

They won the Derby last year with Mandaloun, who won after Medina Spirt was disqualified for a banned substance. Brad Cox wants to win the race the "normal" way this year with one of his horses crossing the finish line first. He wants the winner’s circle experience and see the Garland of Roses on his horse, something that he’s wanted since he first started working on the backside at Churchill Downs.