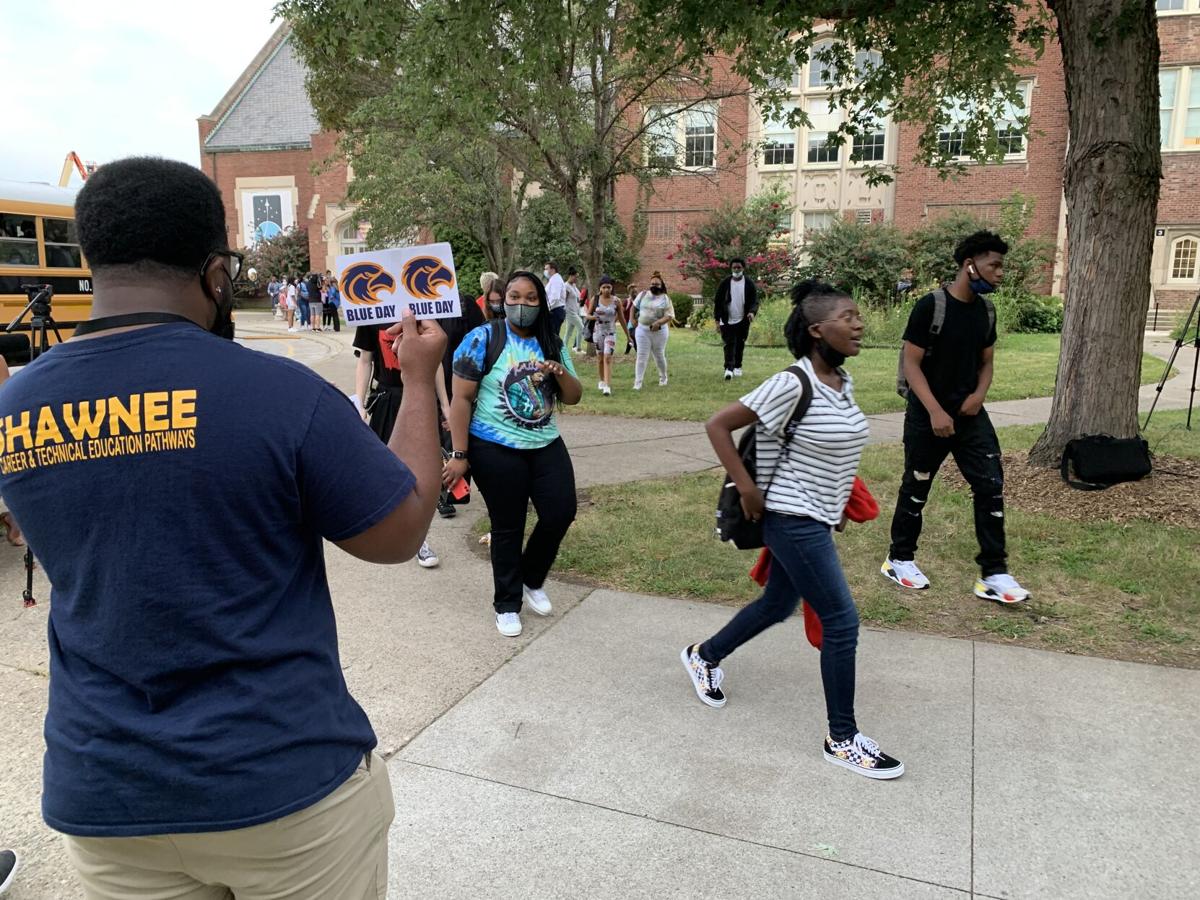 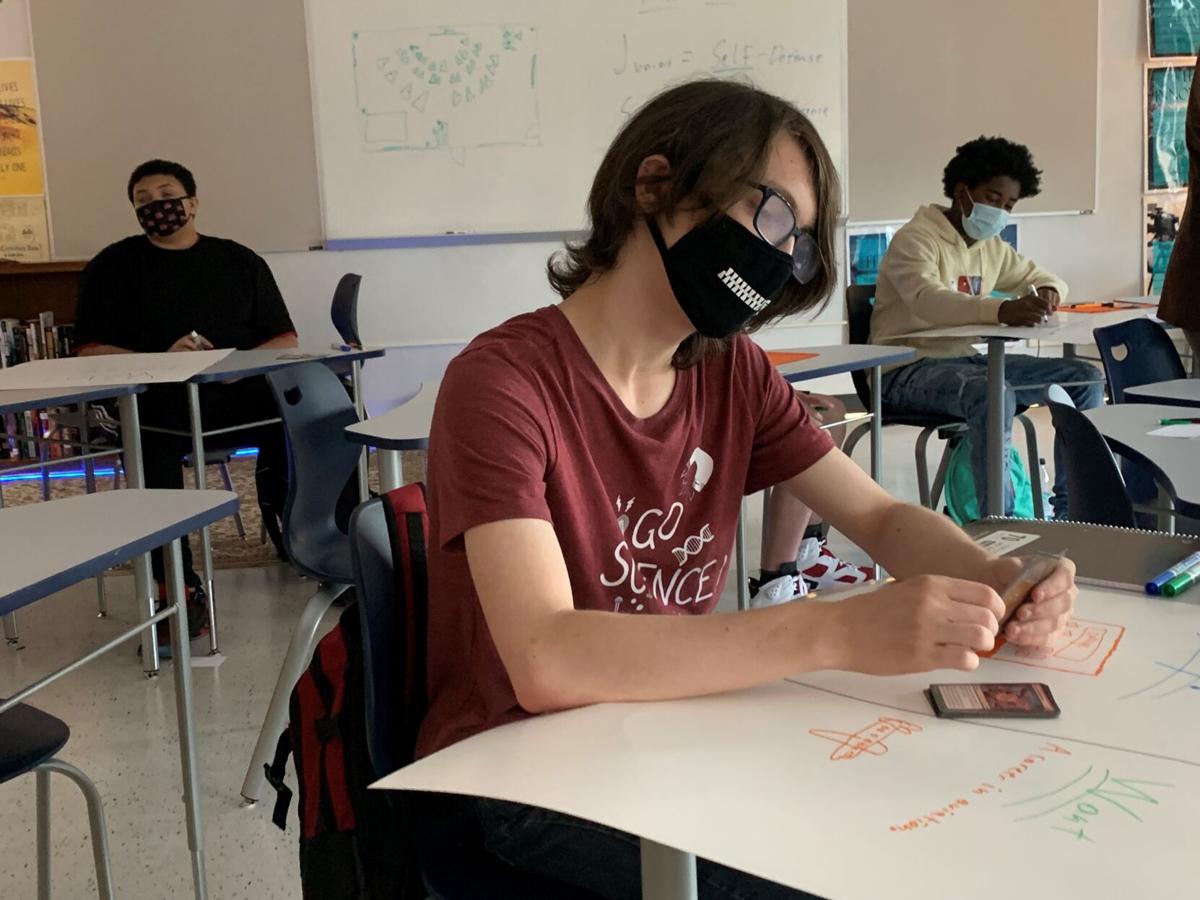 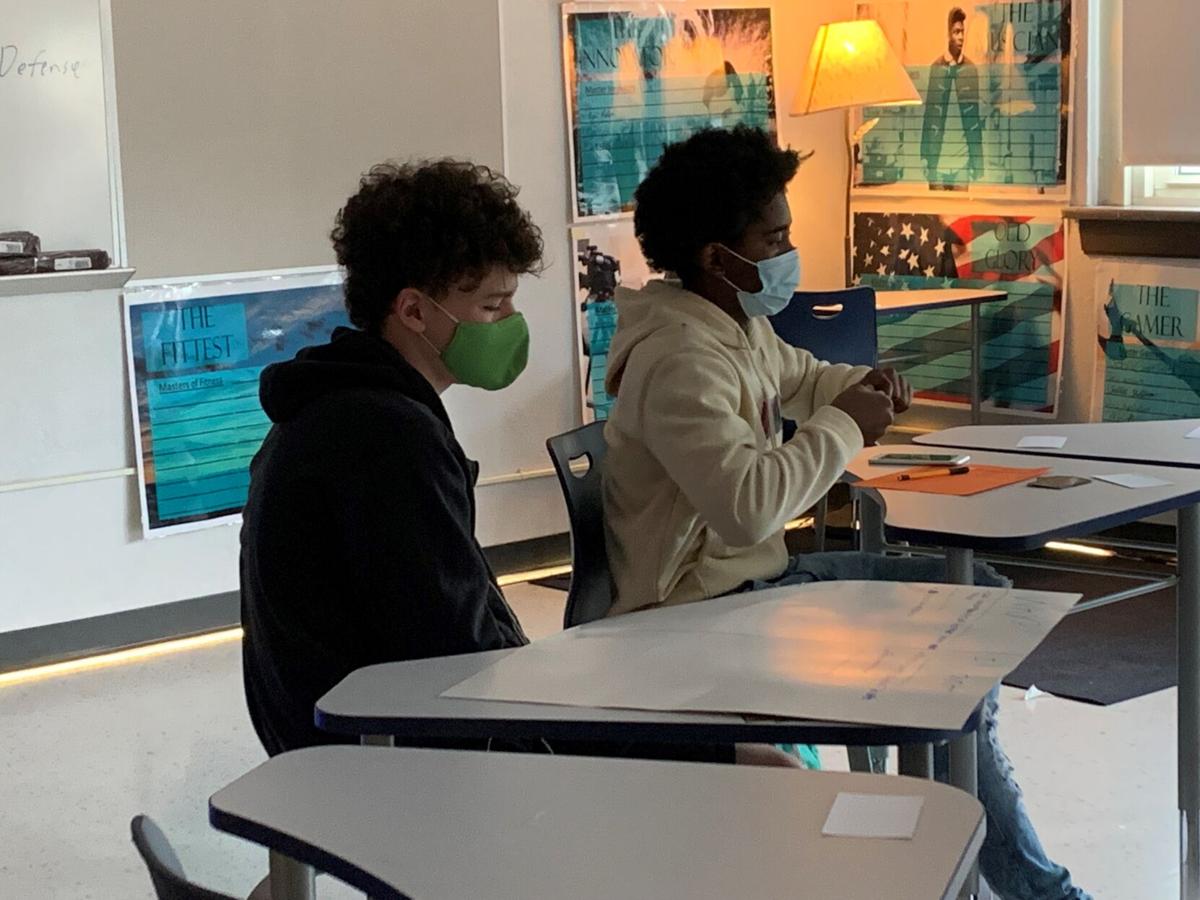 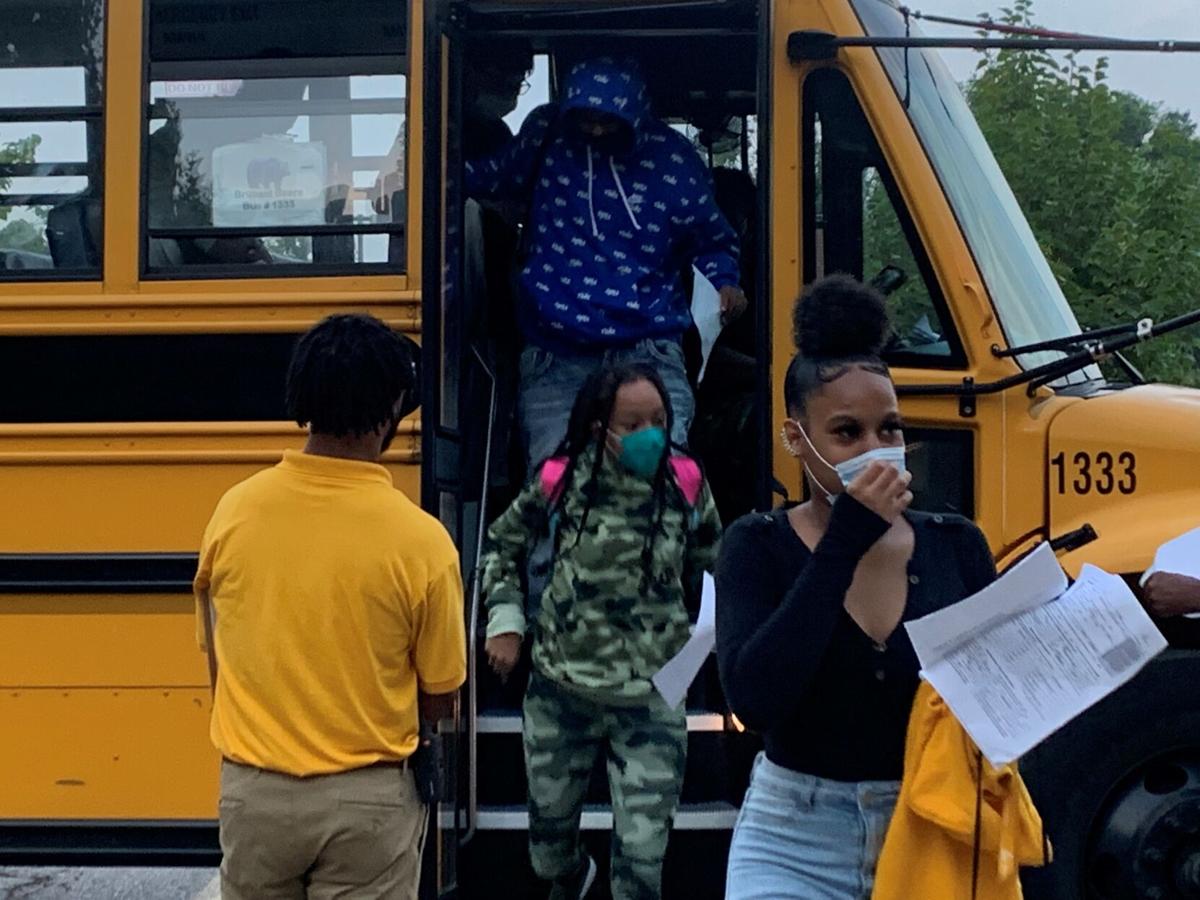 Students wearing masks arrive on the bus on the first day of classes at the Academy @ Shawnee in Jefferson County Public Schools. Aug. 11, 2021. 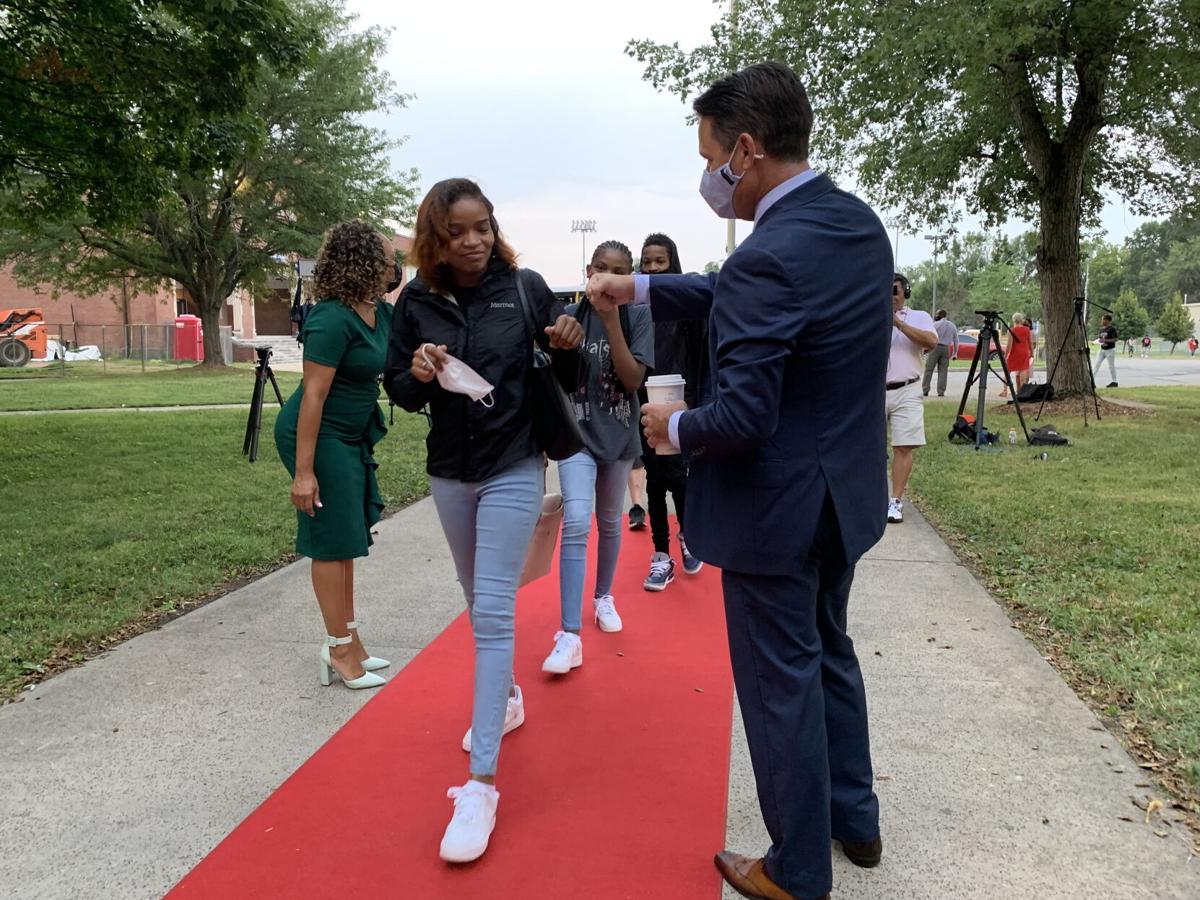 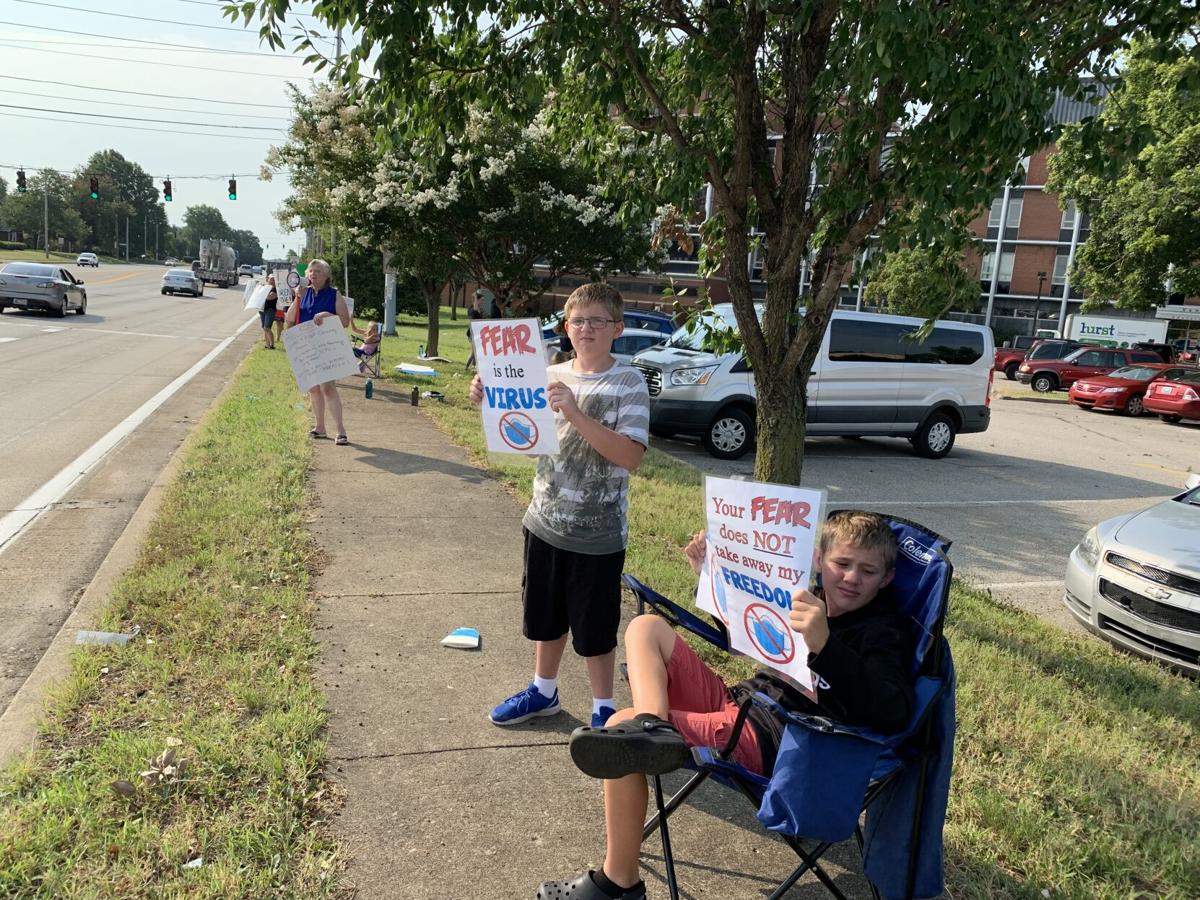 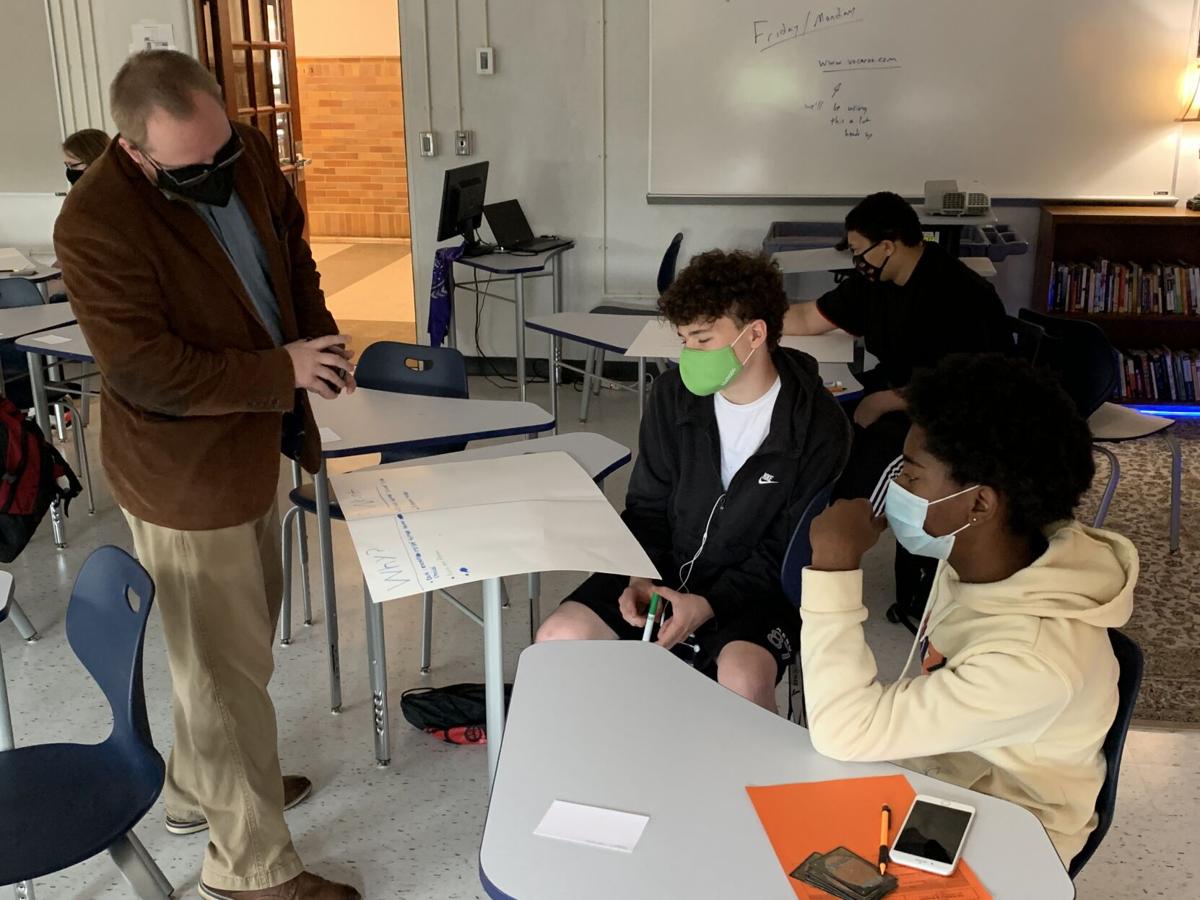 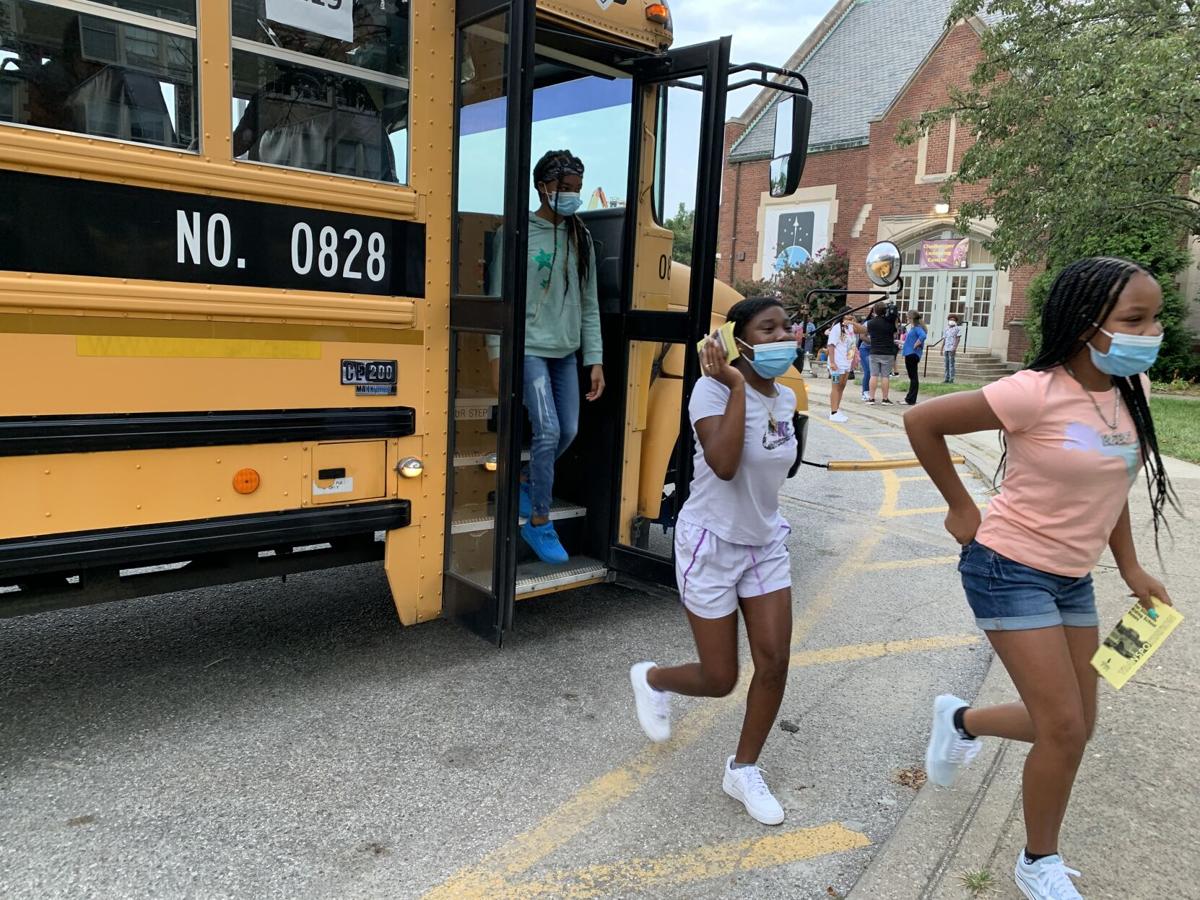 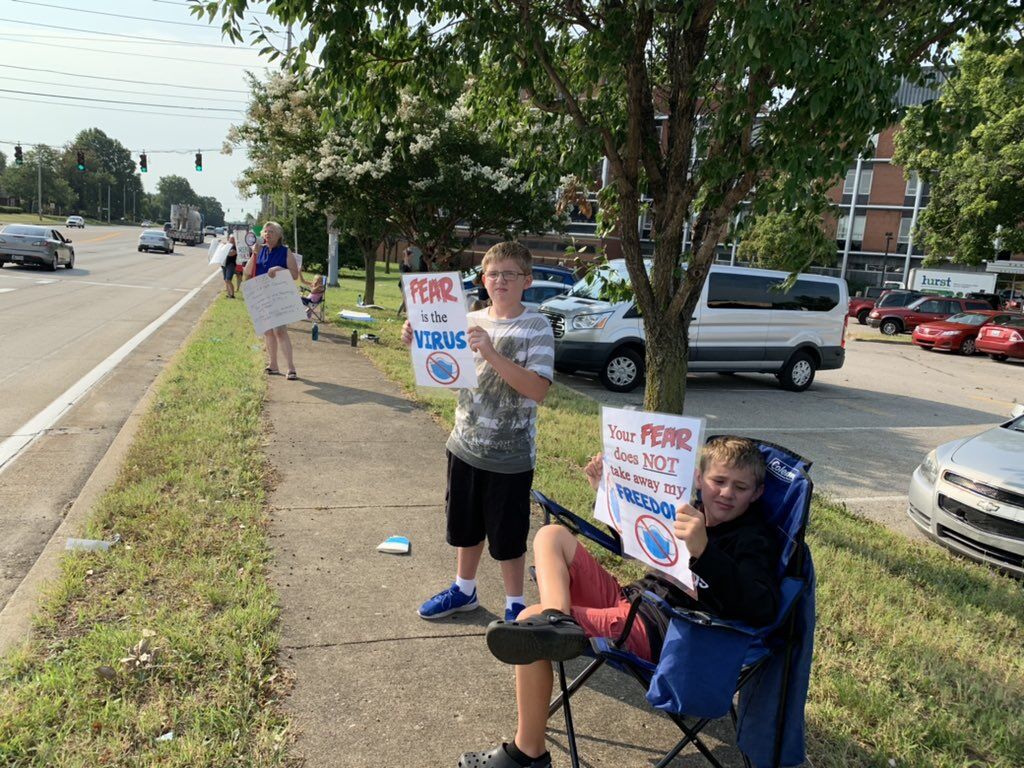 More than a dozen adults and children held anti-mask signs outside the JCPS VanHoose Education Center on Newburg Road on Wednesday. Aug. 11, 2021

Students wearing masks arrive on the bus on the first day of classes at the Academy @ Shawnee in Jefferson County Public Schools. Aug. 11, 2021.

More than a dozen adults and children held anti-mask signs outside the JCPS VanHoose Education Center on Newburg Road on Wednesday. Aug. 11, 2021

LOUISVILLE, Ky. (WDRB) -- For the first time in about four decades, students climbed the stairs to the Academy @ Shawnee’s third floor for classes as the 2021-22 school year began at Jefferson County Public Schools.

Shawnee is “pretty much a staple of the community,” Principal Kym Rice said after welcoming students back to school with a red carpet and music Wednesday.

“I want the community to see the renovations and the things that have happened with Shawnee to know that we are still alive,” Rice said.

JCPS pumped about $42 million into extensive renovations at Shawnee that included reopening the school’s third floor, which had been condemned since the 1980s.

“I just think it’s symbolic for the kids,” said Superintendent Marty Pollio, who began his teaching career at the school. “You know, I’ve heard them say 'You don’t care. The district or the community doesn’t care about Shawnee because of the facilities.' So for us to finally fix that I think is a very symbolic measure for the community and the students here at the school.”

Shawnee students explored their new learning spaces on the formerly condemned third floor Wednesday while masked, like other students at JCPS and throughout Kentucky amid the recent surge of COVID-19 cases.

Gov. Andy Beshear signed an executive order Tuesday requiring anyone 2 and older, with some exceptions, to wear masks inside schools, preschools and child care centers regardless of their vaccination status for at least 30 days. Vaccines are available for those 12 and older.

The Jefferson County Board of Education had previously approved a universal masking policy inside JCPS facilities. About 96,000 students began the 2021-22 academic year enrolled in Kentucky's largest school district.

Juantay Watters is starting his junior year at Shawnee after spending the entire 2020-21 school year learning from home. JCPS started the previous school year with virtual instruction before transitioning to a hybrid learning schedule with some students alternating in-person days and other continuing nontraditional instruction.

“I want to continue playing sports,” he said. “I can’t do online school, especially because I have advanced classes last year. That was just horrible, so it’s better for me being in-person.”

Pollio agreed with Beshear’s decision to require masks in schools throughout Kentucky given the recent escalation of COVID-19 cases driven by the more infectious delta variant.

“Wearing masks helps to reduce the amount of quarantining that we’re going to have to do and increases the likelihood of staying in school,” he said. “... There is no doubt, though, that contact tracing and quarantining is going to be a part of this school year. So we have to minimize that by doing everything we can, wearing masks and distancing as much as possible.”

But masks mandates at JCPS and elsewhere have drawn opposition from some parents. More than a dozen adults and children held anti-mask signs outside the JCPS VanHoose Education Center on Newburg Road on Wednesday.

Debbie Robbins, who identified herself as the parent of a son entering his junior year but declined to share specifics after saying he was not in school Wednesday, said parents would be outside JCPS headquarters on Thursday and Friday as well.

And on the first day of classes at @JCPSKY, about a dozen people here outside JCPS HQ protesting mask mandates in schools. pic.twitter.com/ihCJMZDFBm

“We weren’t heard,” she said of the school board’s decision to require masks inside JCPS schools. “The decision was made before we even walked in the door ... It is our right, our decision, on whether or not our children should have a mask on their face every day.”

In messages to WDRB News, Kolb said his tweet speaks for itself and that voters can decide his future in 2024.

Meanwhile, JCPS reported several afternoon bus delays. A district spokesperson said the final bus was cleared at 7:28 p.m. Some drivers are running double routes, with some students riding three to a seat. On a few routes, parents reported a few students having to stand. Pollio said bus routes are planned for a certain number of children, but sometimes there are unexpected additions on the first day of school.

"There are changes as the day goes on, and a student may be moved and enrolling at a school, so there can be a lot of adjustments, and in a normal year that can happen as well," said Pollio, adding that the transportation department will continue to make changes throughout the week.

"There is no way to socially distance on a school bus and us get 60,000 kids plus transported to school every day on 771 routes," Pollio said. "But we will continue to make adjustments to make that better."