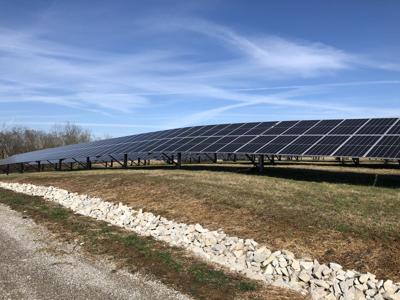 LOUISVILLE, Ky. (WDRB) – Helen Holifield, a yoga instructor and substitute teacher who lives in Shelby County, is alarmed by the warming climate.

"Everything is dying on the planet; we've got to do something quickly," she said.

After getting an electric car, Holifield last summer looked into putting solar panels on her house in Shelbyville to generate her own renewable electricity. But the tree shade and the orientation of her roof made that impractical, she said.

Then one day, while driving on Interstate 64, Holifield noticed the massive array of solar panels being installed by Louisville Gas & Electric and Kentucky Utilities, the local power monopoly, alongside the highway in Simpsonville.

She would soon become one of the roughly 1,300 residential customers and businesses who have signed up to help pay for the build-out of the solar farm, a program LG&E-KU calls Solar Share.

Holifield isn't directly receiving solar-powered electricity at her home. Instead, she pays for a "share" of solar power produced at the solar farm and fed into LG&E-KU's broader grid. Holifield gets both a extra monthly charge for the cost of the solar plant and a credit against her energy bill for her share of the power it produces.

Holifield, who bought in to Solar Share at the lowest available level, calls the few extra dollars she pays per month "a little token gesture" to support renewable energy, though acknowledged she would have to buy dozens more shares to fully offset her household's electricity usage through the solar farm, which would be too expensive.

Thanks to customers like Holifield, LG&E's "community" solar farm beside I-64 is growing.

After putting the solar array into service last year, the utility is about to start construction of the second of what could eventually be eight sections of panels. And it has signed up about half of the customers – called "subscribers" – needed to start building the third section.

About 80% of LG&E-KU's electricity comes from burning coal, the fossil fuel energy source responsible for more plant-warming carbon dioxide emissions than any other. As concerns about climate change grow and more people and businesses become interested in renewable electricity, LG&E casts Solar Share as an easy alternative to residential solar panels.

A solar panel system requires upfront investment on the order of buying a newer car ($20,000 or more) and isn't an option for homeowners with irregular roofs or too much shade or people who don't own their homes or live in multi-family buildings.

"It comes back to the convenience factor," said John Bevington, director of business and economic development for LG&E-KU. "… It's a completely worry-free situation for our customers, and I think there is something to be said for that."

But LG&E-KU's solar subscribers pay a lot for that convenience. So much, in fact, that some say there are more effective ways to support clean energy.

Cunningham said there is "value" in giving customers an option to pay for renewable energy, but "as far as the overall cost per (unit of energy), their system is a rip-off."

Unlike its natural gas or coal-burning plants – which all customers pay for through their electricity bills – LG&E wants to ensure that the cost of installing and maintaining the Shelby County solar farm is entirely borne by the small group of customers, like Holifield, who are willing to support it.

The utility accomplishes this by selling "shares" of the solar farm to customers who become "subscribers."

Each subscriber then receives credit, in the form of a discount on their monthly bill, for the actual solar energy created when the panel absorbs sunlight on a clear day.

But, unlike a typical home with a rooftop solar system, the bill credits for the Solar Share program will never be enough to offset what the utility charges to subscribers, according to a WDRB News analysis.

In other words, customers will always pay more to participate in Solar Share.

LG&E did not dispute that conclusion, with spokeswoman Natasha Collins acknowledging Solar Share subscribers "will not be able to offset the cost of their participation through associated energy credits."

That share then produces solar energy that earns the customer a bill credit worth $0.50 to $3.52 per month, the utility estimates. The credits vary depending on the month (May is sunniest) and whether the customer uses the solar energy at the same time it's produced, which is more lucrative for the subscriber than feeding the power back to the broader grid.

A customer who pays monthly will never get enough bill credits to offset the $5.55 charge. For the typical residential customer, it would take about 38 shares – a net cost of about $78 to $193 per month (or more than $30,000 if paid upfront) – to offset a household's entire electricity usage through Solar Share.

Even those who pay the upfront fee have little hope of recouping it over the 25-year lifespan the LG&E solar farm. WDRB calculated that, at current electricity rates, it would take at least 25 years and possibly more than 80 years for the Solar Share bill credits to equal the upfront charge.

On the other hand, a typical residential solar project with a $22,000 price tag could pay for itself in 9 to 15 years when factoring a hefty federal tax credit ($5,720) available to solar owners, said Matt Partymiller, owner of Lexington-based Solar Energy Solutions, which sells solar systems for homes and businesses.

A key difference is that – for now – Kentucky solar panel owners get significantly higher compensation for the excess electricity that they feed back into the power grid than do Solar Share subscribers.

LG&E and other state utilities successfully lobbied the state legislature in 2019 to roll back a policy called "net metering," in which solar panel owners are entitled to retail-rate compensation for whatever electricity their systems produce beyond their own household usage.

The Kentucky Public Service Commission is expected to reduce the compensation that solar owners get for excess power, but the new rates haven't been set and current owners are grandfathered for 25 years. Each utility’s new net metering rate will be set considering its particular circumstances, according to the PSC.

Solar Share subscribers, on the other hand, get credited at only about one-third of the retail rate for any excess power their "shares" feed back into the grid.

To get the most out of the program, a customer would have to plan to use more electricity during the day when the sun is shining, but that wouldn't be ideal for people who aren't normally home during the day.

Despite those limitations, LG&E stresses that the value of the program is in not having to come up with thousands of dollars to buy a private solar array and never incurring additional costs to maintain such a system.

For example, having to remove solar panels to replace a roof can mean a few thousand dollars in added costs down the road.

Partymiller, who is also president of the Kentucky Solar Industry Association, said there are some aspects of the LG&E farm – such as its visibility along I-64 – that are laudable.

"The more people that know that solar is happening and that utilities believe investment in solar makes sense, the better off our industry is," Partymiller said.

At the same time, the growth of the program highlights the challenges that private solar installers in Kentucky face in competing with regulated monopolies, he said.

Partymiller questioned the overhead costs that LG&E charges its Solar Share subscribers, for example. But state law ensures that businesses like his couldn't open a competing solar farm in a utility's territory, he said.

"If I could build a single large-scale array in the middle of Simpsonville and offer that to customers from the far ends of the state – from eastern Kentucky to western Kentucky – at a fixed rate ... I think I could do so far more cost-effectively than what LG&E is offering right now," Partymiller said.

Another limitation, Partymiller said, is that Kentucky is not one of the states that allows solar installers to lease panels to customers instead of selling them. That's essentially what LG&E is doing when Solar Share subscribers opt for the $5.55 per month cost, he said.

Leasing is a way around the hefty upfront costs of residential system, he said.

Partymiller acknowledged one benefit of the Solar Share design: It allows customers to buy solar energy in small increments, which would not be possible with a typical residential system.

Cunningham, of the Louisville Climate Action Network, said it might be more effective for customers who want to spend a few dollars a month to buy "Renewable Energy Certificates" through LG&E instead of signing up for Solar Share.

But Ben Haydon, a nonprofit executive who lives in Lexington and serves on a volunteer advisory board for LG&E-KU, said he gets a little bit of satisfaction each time he drives by the solar farm on Interstate 64. Haydon bought one share in solar farm's second section that is about to get underway.

"I really like the idea of just being able to pay a little bit of money and saying, 'Hey, I have a stake in that solar panel right there on the side of interstate,'" he said."… That's really not going to be hurting me financially, and it'll be doing a little bit of good in the world."