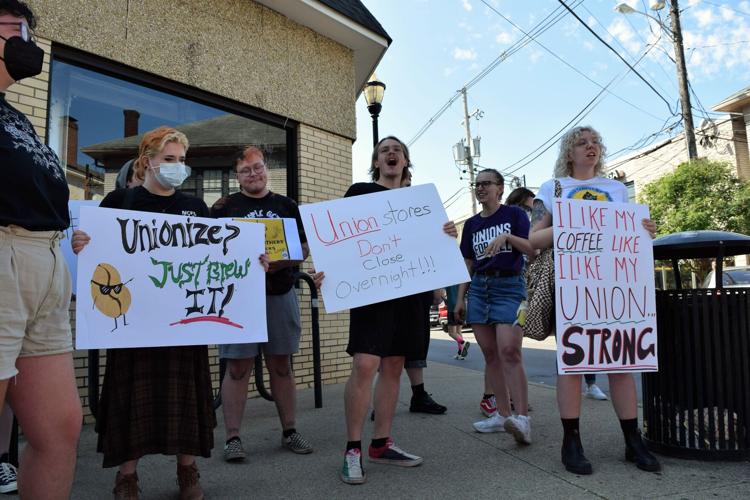 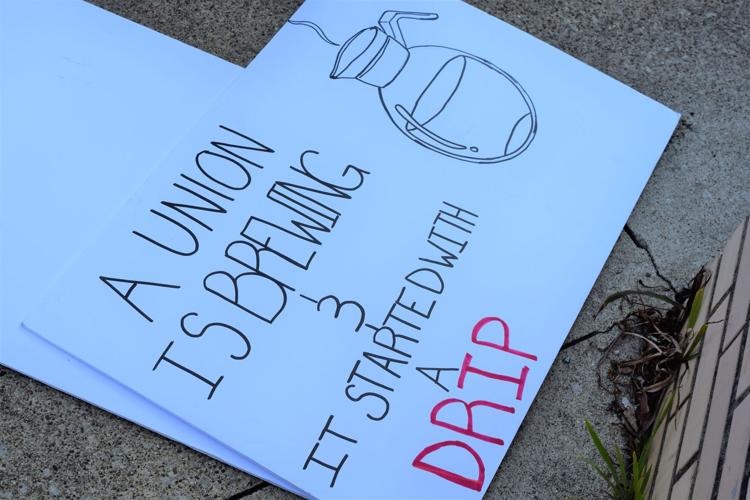 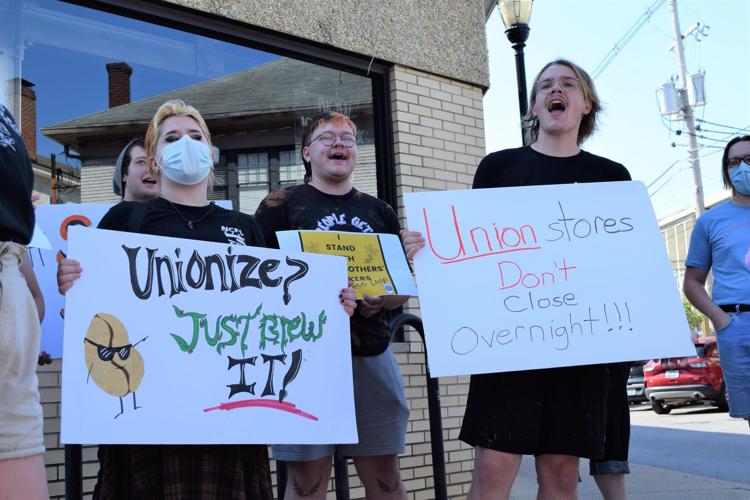 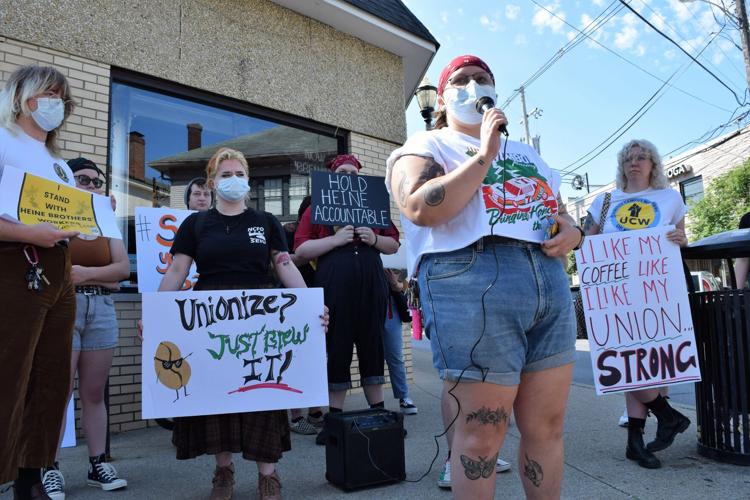 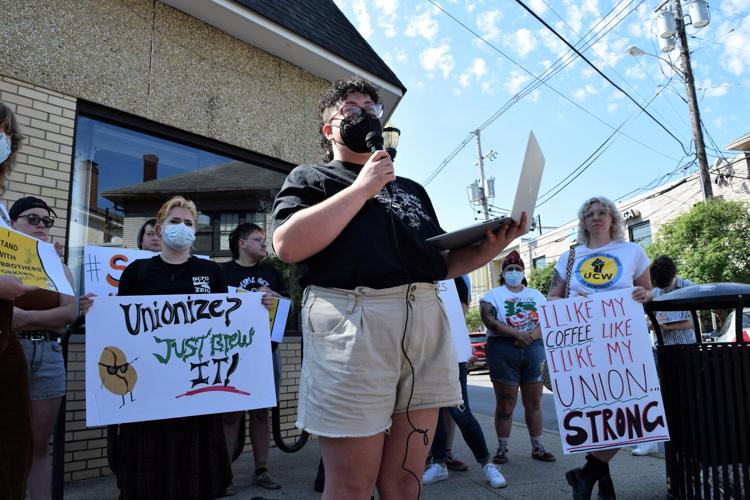 Gami Ray, a former worker at the Heine Bros. location in the Douglass Loop, spoke during a rally Friday, July 1, 2022, in which workers who want to form a union decried the sudden closure of the store June 30. 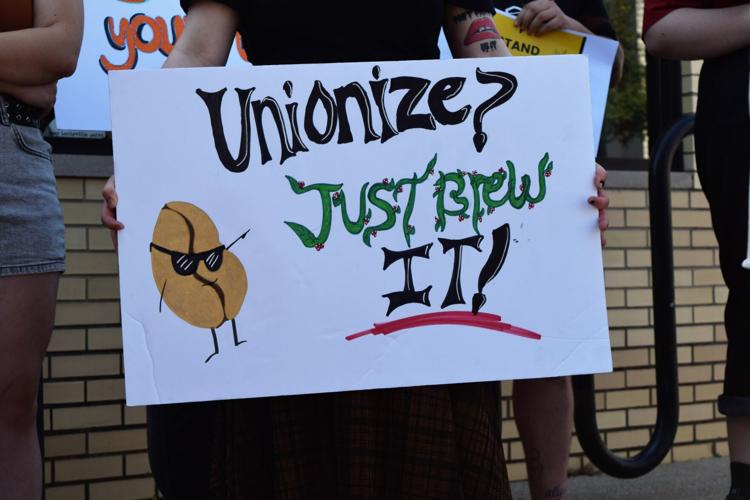 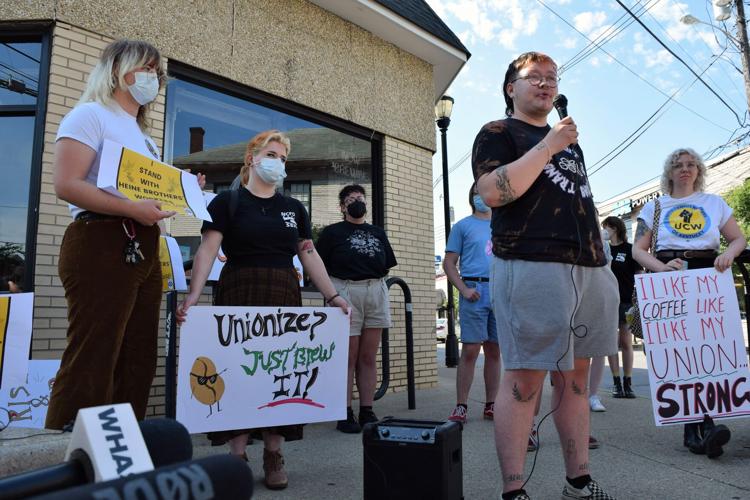 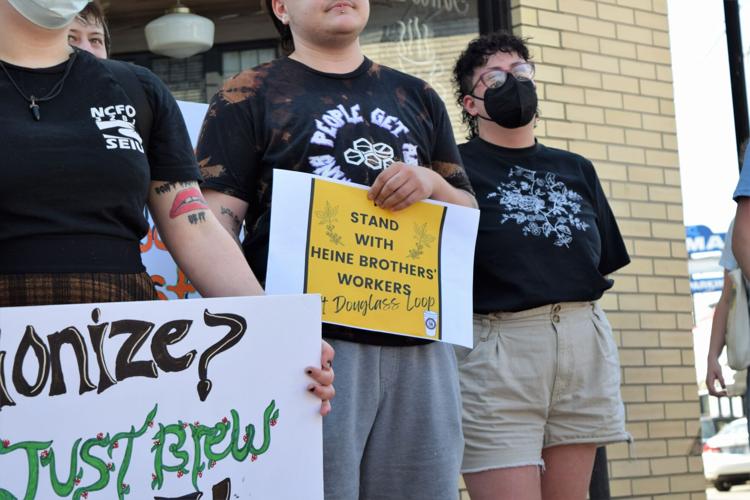 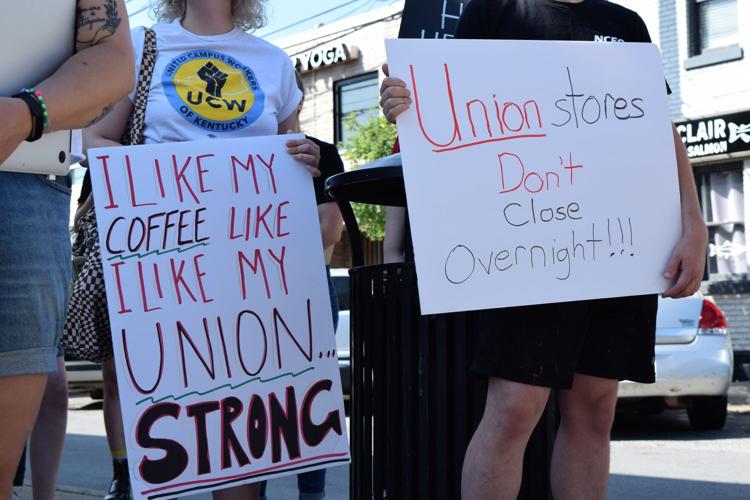 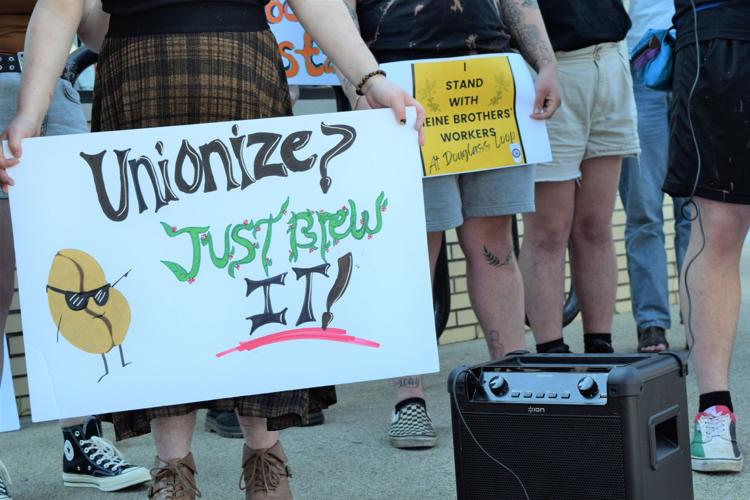 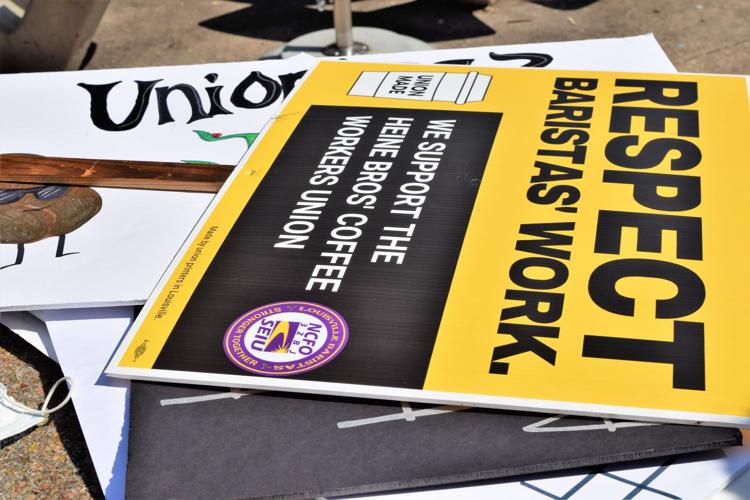 Heine Brothers is biggest union vote in years in Louisville

As many as 221 Heine Brothers workers could cast ballots.

LOUISVILLE, Ky. (WDRB) — Baristas at Heine Brothers Coffee’s 17 stores are the biggest group to vote on unionizing in the Louisville area in almost a decade, marking what labor leaders hope is a resurgence in the movement thanks to fresh interest from coffee makers, book sellers and other service-sector workers.

As many as 221 Heine Brothers workers could cast ballots Thursday on whether to join the Service Employees International Union. The one-day election is happening in person through 9 p.m. at the local chain’s headquarters in the Portland neighborhood.

A group of baristas publicized the campaign last spring, saying they are underpaid and underappreciated in a busy, stressful job. They want better wages, healthcare for part-time workers and more staffing support.

“We baristas are burnt out from the exploitation of our work that we have grown numb to on the daily lack of compassion shown to us by Heine Brothers,” said Aaron Bone, a Heine Brothers worker, during an April announcement of the union effort. “Or, we find ourselves breaking down at the end of our shifts, crying in our cars. But no more.”

Not all Heine Brothers workers agree that a union is needed for the chain, however.

The Heine Brothers baristas are the biggest Louisville-area group to take a union vote since 2014, when the United Auto Workers attempted to organize an automotive supplier plant in eastern Jefferson County that employed about 300 rank-and-file workers, according to WDRB’s analysis of records from the National Labor Relations Board.

Organizing smaller groupers is inherently easier than larger ones, and typically, workers forming collective bargaining units are only a dozen or two. The median group in the Louisville area seeking union recognition has been 26 employees, according to WDRB’s analysis of NLRB cases dating to 2010.

The store-by-store approach has allowed a union called Starbucks Workers United to win recognition at 214 Starbucks shops nationally since 2021, each with only a couple dozen workers. That includes two Starbucks in the Louisville area and a third pending.

“Generally it’s true that we have, traditionally, plant-by-plant — in this day and age, store-by-store — unionizing,” said Ariana Levinson, a professor of labor law at the University of Louisville. She said that’s because of the challenge of building consensus among a large number of people and also because American labor law makes it difficult to organize workers across multiple worksites and employers.

“Of course with more numbers, that makes it a little bit more diluted, and you have to get more input,” said Robert Smith, secretary-treasurer of the National Conference of Fireman & Oilers SEIU, the union that seeks to represent Heine Brothers workers. “But I give these workers credit. This is their union, and they have done the work.”

Smith added that is more “commonality” for workers within the local Heine Brothers chain than for workers in a national chain like Starbucks.

“They’re all in the Louisville or just across the river in Indiana, so they have a lot more in common when it comes to the workforce. You know, the workers actually go from one store to another quite frequently,” he said. “…The proximity is huge.”

The Heine Brothers workers are the most prominent example of a recent uptick in local union activity.

Levinson said a confluence of national factors is driving renewed interest in organized labor, including increasing income inequality and the especially tight job market, which gives workers leverage to make demands of employers.

“Generally, employers have the upper hand, but the workers have a little bit more power in the economy right now. And so that's contributing to this historical moment,” she said.

Unions have become less prevalent in Kentucky and Indiana the last few decades, part of a national trend away from organized labor, especially in the private sector. In addition, both states have adopted so-called right-to-work laws, which make it harder for unions to maintain funding and, in turn, to organize new groups.

In Kentucky, 7.2% of workers were members of unions in 2021, the lowest concentration on record since 2000, according to an annual federal government survey.

But the 20-something Heine Brothers workers may signal a generational shift back to organized labor, Levinson said.

Louisville-area labor leaders welcome the interest from groups who traditionally have not been in the movement.

“When would you ever think that somebody would organize a coffee shop?” said Todd Dunn, president of the Greater Louisville Central Labor Council, an umbrella group of local unions. Dunn also leads UAW Local 862, which represents about 13,000 workers at Ford Motor Co.'s two Louisville plants.

“Well, those workers, if you think about it … they don’t manufacture the coffee, but they manufacture the drinks. It’s an assembly line process. They’re pushed to get it out as quick as possible. And they want to have benefits for their family and wages that they’re proud to make. So they’re no different than an auto worker.”

‘They don’t understand what we’re really going through’

When baristas who formed the union organizing committee gathered on a chilly April day outside Heine Brothers’ downtown shop, surrounded by a few dozen supporters, the message went beyond wanting higher wages.

It was a direct challenge to the progressive values that the 28-year-old local business, which prides itself on “fair trade” coffee, has long espoused. Workers said their managers are out of touch with their struggles.

“I think that the upper management … are so far removed from what goes on a daily (basis) that micro-aggressions and things like that, that we deal with at the stores that contribute to it being a stressful environment to work in (go unnoticed),” Noa August, a worker then at the chain Douglass Loop store, told WDRB at the time. “… They don’t understand like what we’re really going through.”

Heine Brothers abruptly closed the Douglass Loop store, where workers say all 10 or so employees were in favor of the union, in June. While workers saw retaliation, the chain offered them positions at other stores and said the closure was business-related due to the store lacking a drive-through.

Not all baristas are on board with the union effort. Some say it has cast the company in a negative light and sown divisions between workers.

Leonardo Mora Martinez, a 20-year-old University of Louisville student who works part-time at the company’s Longest Avenue store, said a recent pay increase ensures workers earn at least $14 an hour with tips, which is a decent wage for a coffee shop. An employee assistance program provides benefits including therapy even to part-time employees, he said.

Martinez worries about an unnecessary layer of separation between workers and managers.

“This company is still so local and so small that there isn’t going to be any corruption that goes unnoticed, right?” Martinez told WDRB News. “Like, there’s not going to be a manager that is telling the baristas to clock out before they do their chores. Because somebody’s going to hear about it, because this is not some Jeff Bezos/Amazon-level company. So while I do believe that unions are useful or helpful in some circumstances, I don’t think Heine Brothers needs one.”

Abby Kilman, a shift leader at the Longest Avenue store, said some demands, such as a health insurance for part-time workers, strike her as unrealistic, but managers are willing to ensure workers get the hours they need to qualify for health insurance. In general, she said, workers are able to address problems via one-on-one communication.

Kilman, who is also a marketing intern for the company, a position that would not be part of the proposed union, said the downsides of the effort include union dues coming from paychecks and the prospect of strikes.

“I get, like, wanting to be, you know, passionate and progressive and wanting to be a part of the company and the decisions that are made. But I think the actual part of being in a legitimate union might not be what they were anticipating,” she said.

Heine Brothers, for its part, said in a statement, “(W)e do not believe third party representation is needed at Heine Brothers. However, we respect our Team Members’ right to make the decision to be represented by a union or not.

“As we have said, we will respect the outcome of a fair and legal election, and we fully intend to do so. We look forward to putting this election behind us, and as we have done for the past 28 years, we will continue to focus on being a great place to work, delivering a remarkable coffee shop experience to our customers, and doing our part to make a positive difference in our community.”